A Pain To Learn, A Joy To Play 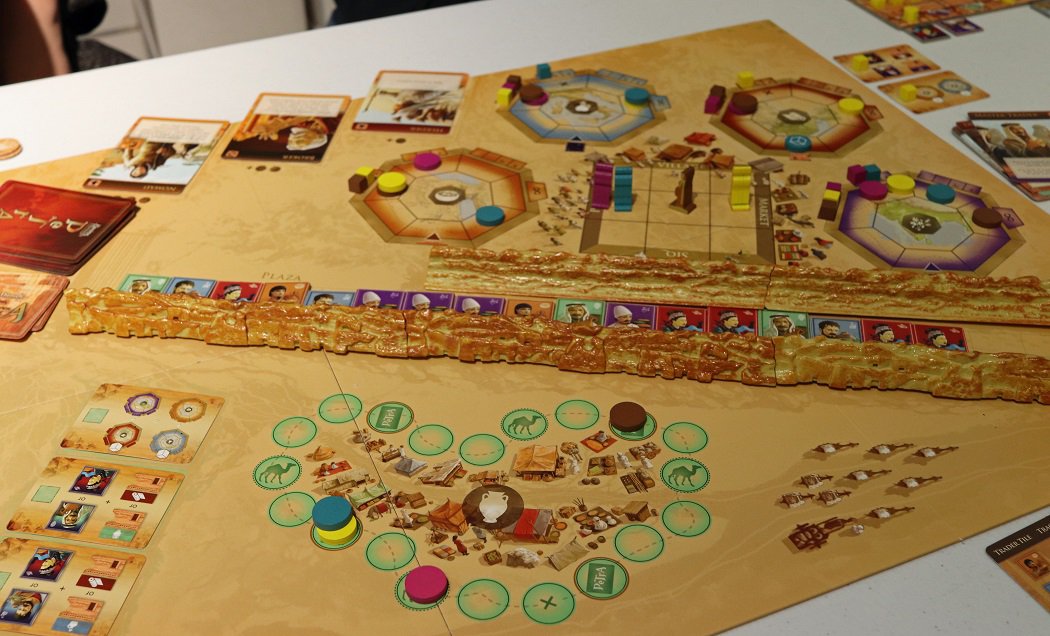 Passing Through Petra is another new game by Renegade Game Studios, released in early December of last year. Players take on the roles of powerful citizens, each trying to spread their influence the fastest. This is done by taking in merchants to your settlement as a way to extend your reach. Eventually those merchants will set up settlements, and those settlements will trade with the new merchants you collect, thereby spreading your name and your influence as an important center of trade. Whoever spreads their power the fastest - meaning that you run out of influence cubes first - is the winner.

As much as I want to, I can’t quite say that it’s another entry in Renegade’s “worker placement but” lineup. It feels like it should be, but this game only has the barest hint of worker placement and does not use the VP system that’s such a hallmark of the worker placement genre. To use Renegade’s own term, Passing Through Petra is a tile pushing game. Great. So what the heck is that?

The centerpiece of Passing Through Petra is the long canyon that incoming merchants all travel through. Each merchant is represented by a tile that fits neatly into that canyon and slides down it, pushing everything before it to fill in the gaps and get the tiles to the Plaza, thus, “tile pushing.” Then the tile pushing comes into play again as you take merchants for yourself, forcing the ones that you already have out of your merchant row and moving them up into the settlements.

So it turns out that the name is pretty self-explanatory, and it makes sense once you see it in action - which is something I’ll be saying a lot in this article. 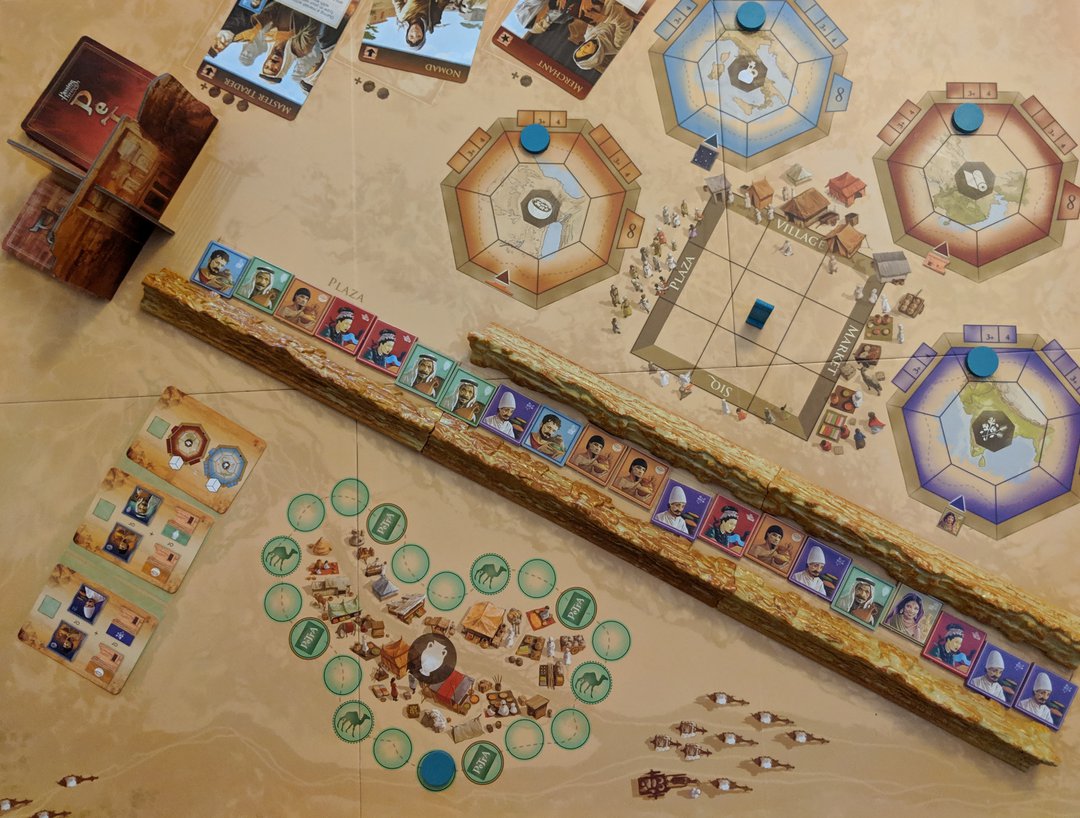 The canyon is divided into two sections: The Siq and the Plaza. One of the small joys of Passing Through Petra is how much it tries to reference the real life location from history.

The tile pushing more or less takes care of itself, so let’s talk player actions. This is another way that Passing Through Petra feels almost - but not quite - like a Eurogame. You choose your action each round by moving around a 3x3 grid. Each side of the grid has an action listed on it, and the action that you move toward - not necessarily land on - is what you do that round. It’s not nearly as restrictive as a rondel, but it does ensure that you can’t spam a single action over and over again.

The four actions you can choose from are Plaza, Siq, Market, and Village, representing the different areas of your little town. The Plaza action lets you take any two merchant tiles from the Plaza (go figure). This is a very powerful action if you’ve got the right tiles available, but it’s also a bit more restrictive because there are only six tiles in the Plaza at any given time. Siq lets you take one tile from the Siq, which all but ensures that you’ll get the type of merchant you want, but is much slower than Plaza because you’ll only get one tile at a time.

The Market action is the lynchpin of the whole game. When you move toward Market, you choose one of the settlements above your player board. Each settlement has a particular type of merchant that it wants to trade with, so it will look for that in your merchant row. You multiply how many people are in that settlement by how many of the relevant tile you have in your merchant row, and move that many spaces around the track that matches the settlement’s color, then send the traders from your settlement back to the bag. I know that was a convoluted sentence - Market is by far the most complicated action in the game, but again, once you see it in action it makes total sense.

Market is also where the one hint of worker placement that Petra has comes into play. You choose which settlement to use by placing a worker in it. Since each settlement only has one worker space, this means that you can’t use the same settlement over and over.

Following up on that, Village lets you take your workers back so you can keep on trading, and then hire a villager card based on how many workers you sent back. Villager cards can give you an immediate effect, an ability that you can use once at a time of your choosing, or a permanent effect that will help you out for the rest of the game. 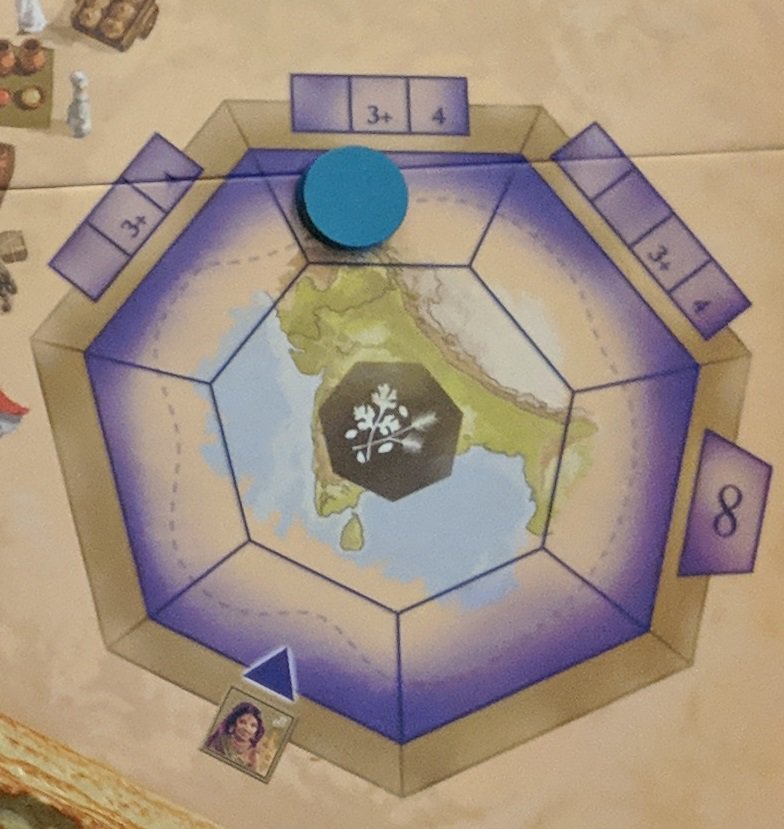 One of the trader tracks available to you. The Trade action allows you to move around these tracks, collecting bonuses and placing influence.

I didn’t expect to like the grid mechanic, but I actually found that it felt pretty good. I had to use a bit of variety in my strategy (otherwise I’d have almost certainly just spammed Plaza and Market), but I never felt like I was being forced into an action that I didn’t want to take. Also, the fact that you can’t put multiple workers into the same settlement - but you get to hire villagers based on how many workers you retrieve - encourages and/or coerces you to change things up as you play.

And, really, that about does it; each turn is simply the player selecting one action and then doing it. It’s beautifully simple and efficient gameplay.

Now we come to the sticking point. While Passing Through Petra plays quickly and easily, learning how to play it is a whole different beast. Generally an experienced board gamer can learn a new game fairly intuitively; it’s just about learning how that particular game fits all of its pieces together, with maybe a new mechanic or a new twist on a familiar concept. That is not the case here.

In order to learn Passing Through Petra you have to work basically from the ground up, and without someone who already knows how to play that’s not such a simple thing to do. You have to learn the tile pushing that forms the basis of the whole game, you have to learn how that fuels the Market action, and the results of going around the different tracks, and I haven’t even touched on all of the little extras that you can earn by doing so. 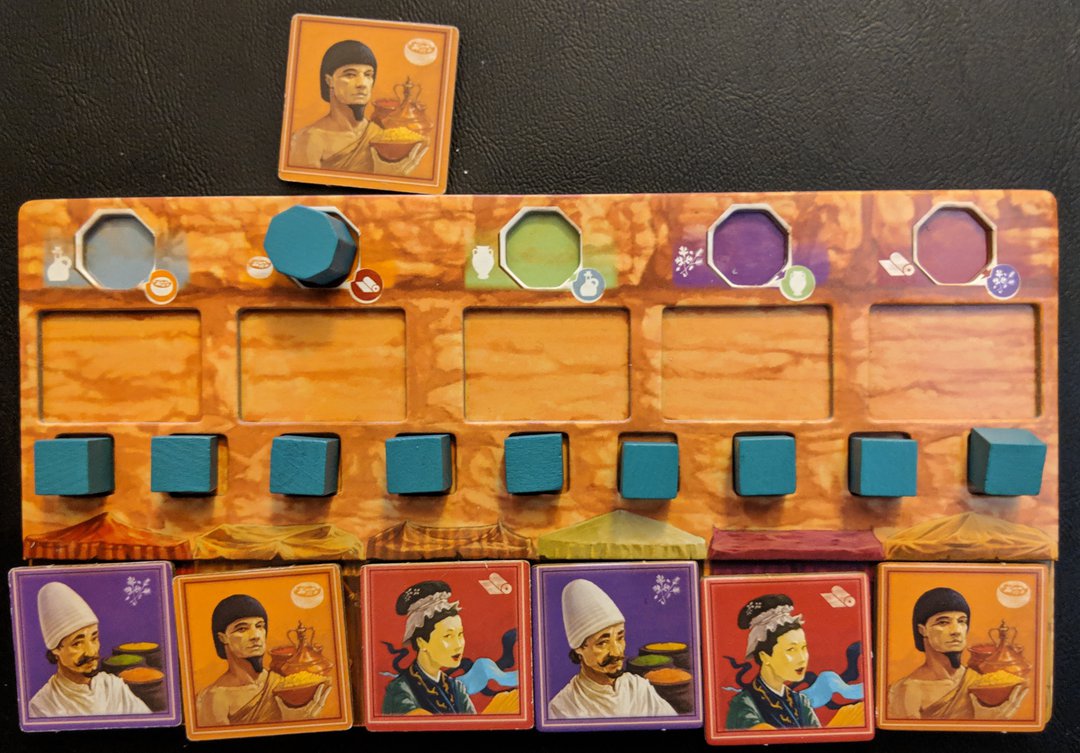 Each player board requires some setup of its own

No one part of Petra is especially difficult, but it’s tough to wrap your head around how all the little gears mesh together until you’ve seen it in action - which is true of a lot of games, but even more so here because of all the unfamiliar mechanisms. Go into your first game ready to be patient, and you should be fine.

Worth The Trouble - And The Money

The good news is that I would still absolutely recommend Passing Through Petra. While the unique mechanics cause some headaches at first, they create a unique experience that doesn’t have to fight other games for a space on your shelf. While “unique” isn’t enough to earn a recommendation by itself, Petra also feels great to play. Pushing tiles down the canyon and moving yourself are perfect examples of mechanics driving plot, such as it is, and the game looks and feels great on the board. Turns are quick and smooth once you understand the rules, and a whole game should take you less than an hour, so it isn’t a huge time commitment.

After that first game, I found myself really enjoying Petra as an experience, and so did everyone else around the table. Passing Through Petra is a game that I will happily bring to game night again and again. If you are willing to brave a little bit of extra learning, I'm sure you'll find yourself doing the same thing. Good luck in the desert, and may you find all the merchants you can!