An Intense Trip Through A Beautiful Hellscape 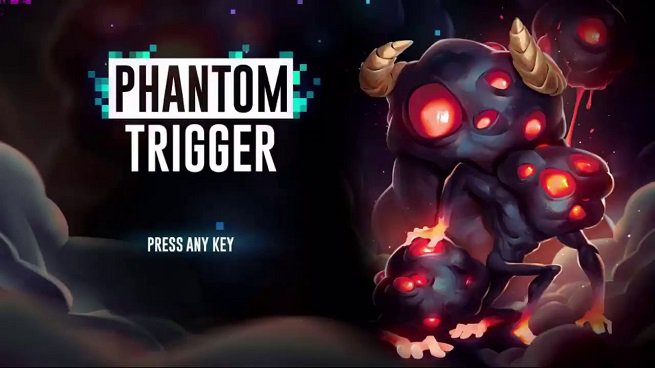 Phantom Trigger is a pixel hack n’ slash game fueled by pulsing electronic music and combo-based combat. It truly tries to live up to its’ self descriptor of “hardcore neon-slasher.” Placing the player in the shoes of the “Outsider,” you must clear out labyrinthian dungeons in the same way that any fan of slashers should know and love. However, behind all the ripping and tearing lies a complex story telling the story of where you are and determining the fate of that world.

This is a game that appears straight forward, but adds a level of complexity to make it worth your time. 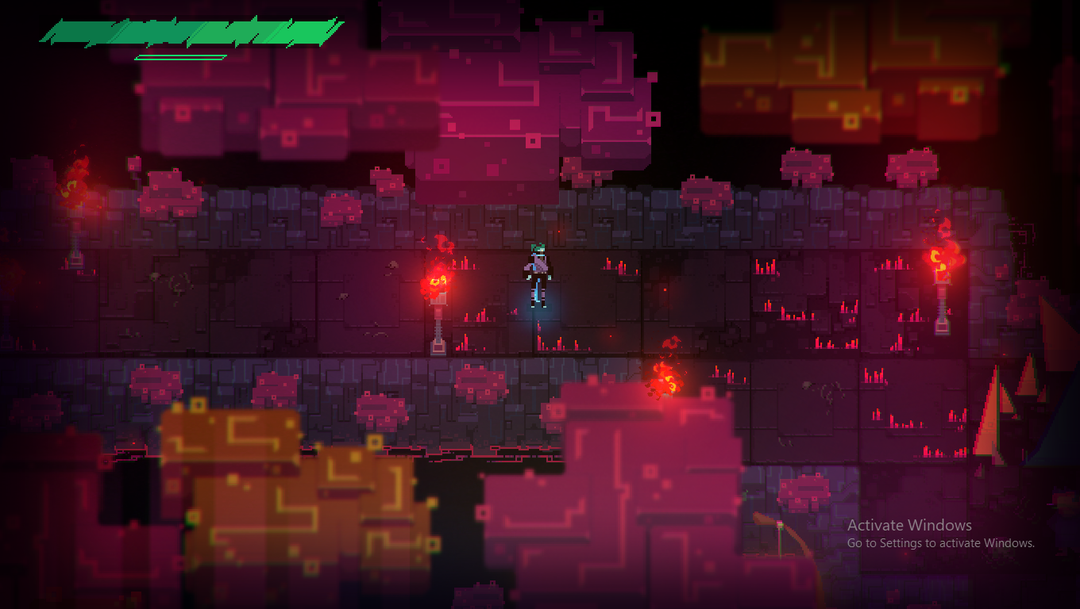 While some games just call themselves hardcore, Phantom Trigger really earns the title. This game is hard. During the first few hours of my playthrough, I had to dial down the difficulty to a lower setting, but even then Phantom Trigger continued to be relentless. Enemies are thrown at you constantly, and health is only regenerated through random enemy drops or reaching checkpoints in dungeons.

That’s not to say that Phantom Trigger doesn’t give you all the tools you need to defend yourself. The Outsider’s arsenal consists of three different kinds of attacks; a quick ice blade with magic that can freeze opponents, a massive fist with the power of fire that can knock enemies down and a whip to pull all those baddies trying to get away within range. As you use these weapons, they level up on their own, unlocking new combos that boost the powers of your magical weapons. Your ice blade can slow enemies or even freeze them in place, making it an invaluable tool when you’re set upon by 15 or so enemies. 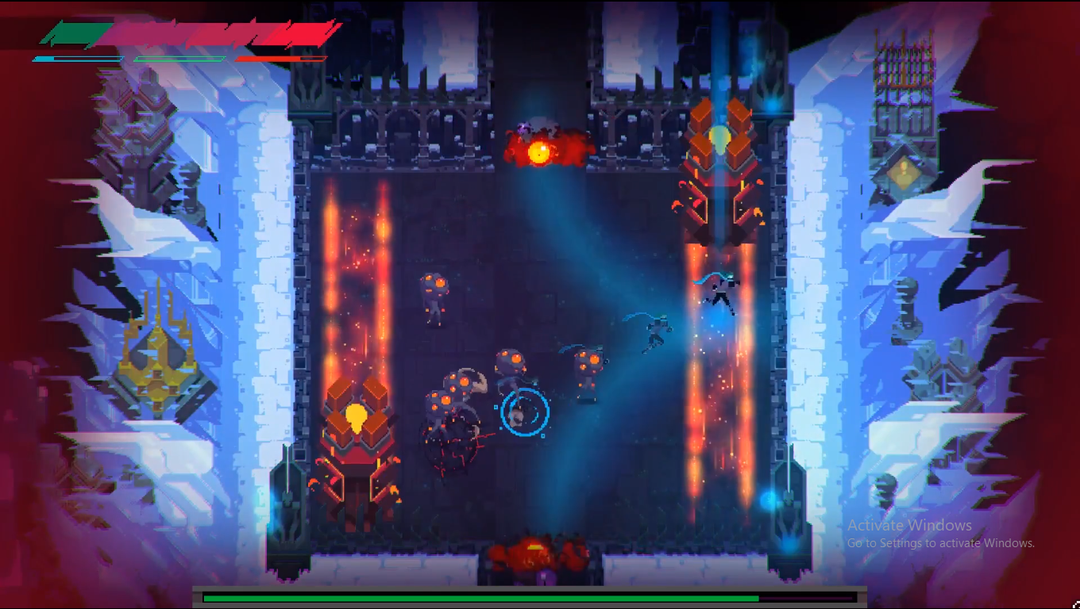 Through the course of the game, familiarizing myself with these combos became essential, especially when different variants of enemies began to appear, such as small bouncing enemies that dealt damaging area of effect attacks or others that lob explosives toward the Outsider. With every new enemy, Phantom Trigger’s combat changes drastically, often becoming more chaotic and fast paced in the best ways possible.

What good are dungeons without boss fights? No good should be your answer. Phantom Trigger’s boss fights are challenging and innovative, either having players harkening back to themes throughout the dungeon to win the fight or introducing a new idea completely. However, these bosses were never as deadly (and certainly never as infuriating) as the hordes of enemies that are thrown at you, making some bosses feel like more of a way out of the dungeon than the end goal I’ve been trying to reach.

The Surprise: A Reality Bending Story

While you’re dungeon diving through the game as the outsider, a second story is continuously unfolding in the real world, starring Stan and his wife Pam. This story starts as vaguely as the Outsider’s does, but hints constantly that the two are deeply connected in some way. It's a great twist to what could have been a straight forward action game.

Of course, the Outsider can’t always be exploring dungeons, or at least, doesn’t have to be. Before entering any dungeon, you are left in a small hub-world where you can interact with a diverse cast of characters, each with their own ties to the overarching plot of the game. Interactions with these characters are completely up to you: will you check in on everyone periodically or just leave them to their own business? 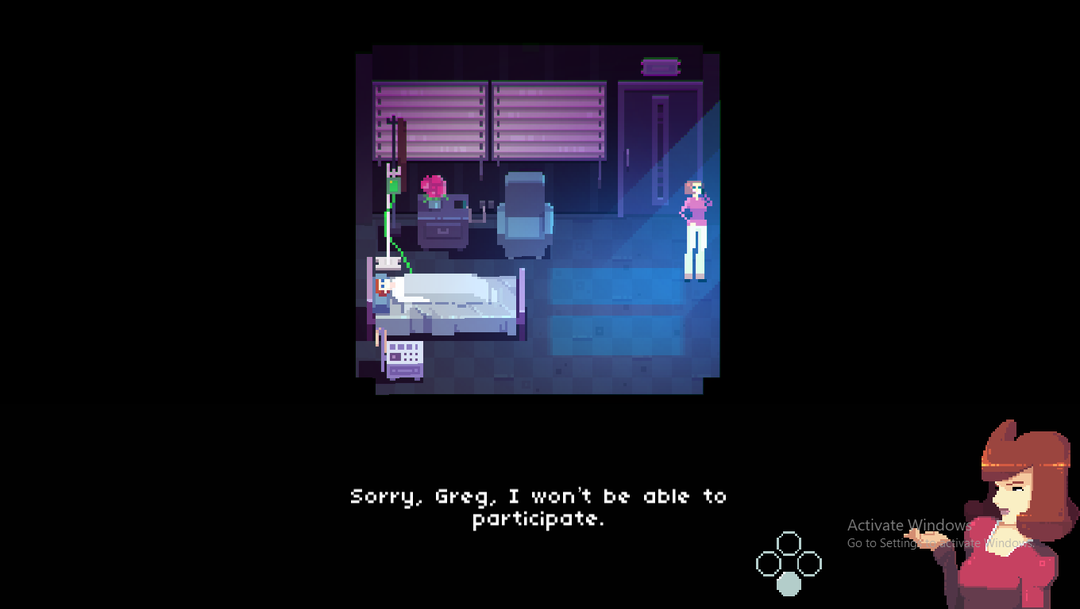 Phantom Trigger’s story also allows for some player choice, but not always in obvious ways. Some are more obvious than others, like finding chili for a character that enjoys cooking, or flint for another. However, some are less clear than others (for spoiler’s sake, I won’t say what these choices are), and when I reached the end of the game, I was left wondering what I could have done differently.

The Bad: Ghosts in the Machine

While you can destroy most of the enemies you run across in Phantom Trigger, there is one that can’t be beaten: the game’s numerous glitches. On multiple occasions during my playthrough, I found that the camera was stuck on one section on the map, no longer following the Outsider. At other times I would end up stuck behind rocks that I had teleported behind at just the right angle.

Certainly my most infuriating experience in this game was a glitch that I could easily replicate that stopped a certain type of enemy from moving or being able to be hit. Normally, that wouldn’t be an issue, but when the game traps you in an area until you defeat all of your enemies and this glitch occurs, it becomes a glaring mistake. It's a shame that a game with so much going for it can be slowed down by repeated small mistakes.

Neon-Filled, Trippy Fun ‘Till the End

Despite my run ins with glitches, my time playing Phantom Trigger was exhilarating. I never found myself getting bored of fighting enemies, and even went back to the game’s additional arena mode just to keep knocking heads. This combined with the engrossing story of Phantom Trigger make it a quick recommendation for any fan of hack n’ slash games that wants a good thrill for cheap.