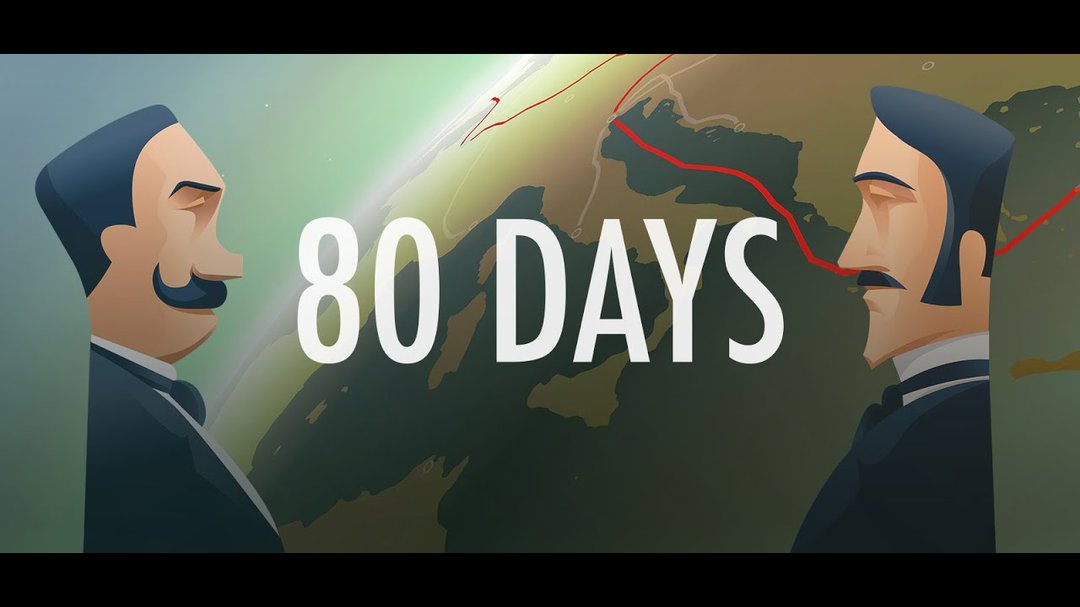 I’m normally very wary of Switch games that were previously released on mobile. It takes a certain, special something to be both a game worthy of smartphone portability and console complexity. But show me a game unlike any other and I’m bound to take a second look at further offerings from a studio! If you read my review of Heaven’s Vault you know that this particular developer, inkle, has already captured a special place in my heart.

With that name still ringing in my ears, I set forth on a journey once again. This time though it was one of rail and sail, of steampunk airships, and occasionally of submarine or other strange craft. Based on the Jules Verne novel Around the World in 80 Days, this alternate history adventure tale will see you matching your wits against perils the world over.

Is this a race worth taking on? Let’s find out. 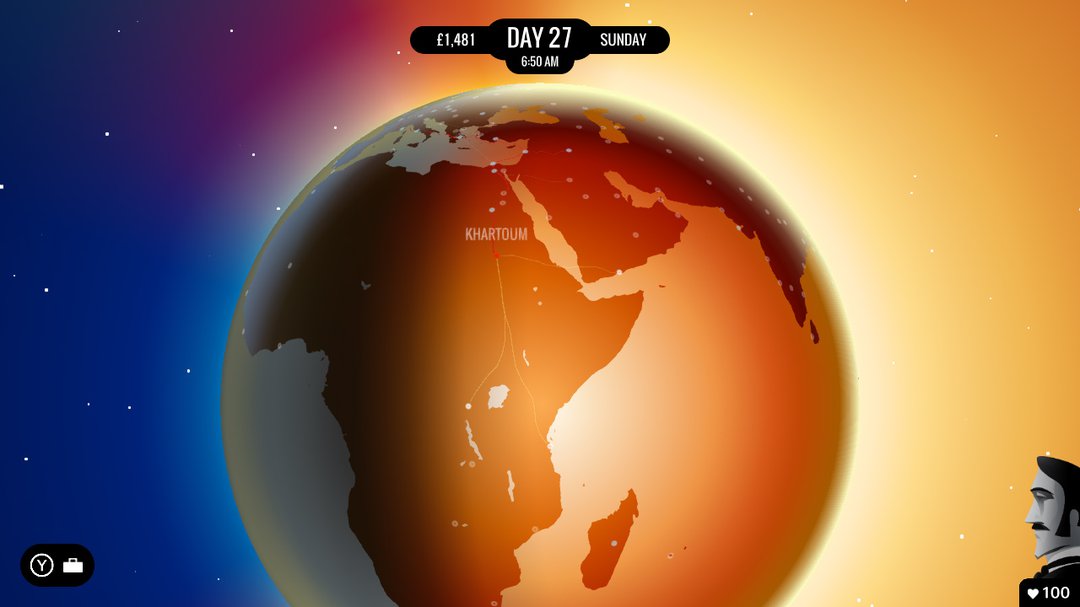 And what a race it will be! The route, and the consequences, are completely up to you!

You, a French valet named Passepartout, have just learned that the British gentleman who employs you has made a wager for an outrageous sum of money. Twenty thousand pounds to be won or lost on a simple premise: it should be possible to circumnavigate the globe in 80 days or less. It is a sum that will secure a position in history for its daring. That is, if it doesn’t instead ruin him. Of course, Mr. Phileas Fogg is equal parts learned upper class and absolutely daft rich person with little sense of how to manage finances on the road or talk his way through trouble. That’s why he’s hired you! It is your cunning, your intuition, and your decisions which will see the journey to its natural success or failure. No pressure.

I, the player, had my doubts. The game itself seemed too simple: an interface with only a few buttons, minimalist character portraits, the bulk of the gameplay like a choose-your-own-adventure text. And that’s no exaggeration; while there is a minigame in packing your luggage with possessions on which you can speculate (that is, sell at other locations for a profit) or that impart other small bonuses, the main game is played in a series of texts you read and respond to. You can also question people you meet for new travel routes on your map, but that’s largely it for mechanics. Skeptically, I started us out of London to our destination, Paris, with our carriage barely pulling into the train station in time. We were on our way. 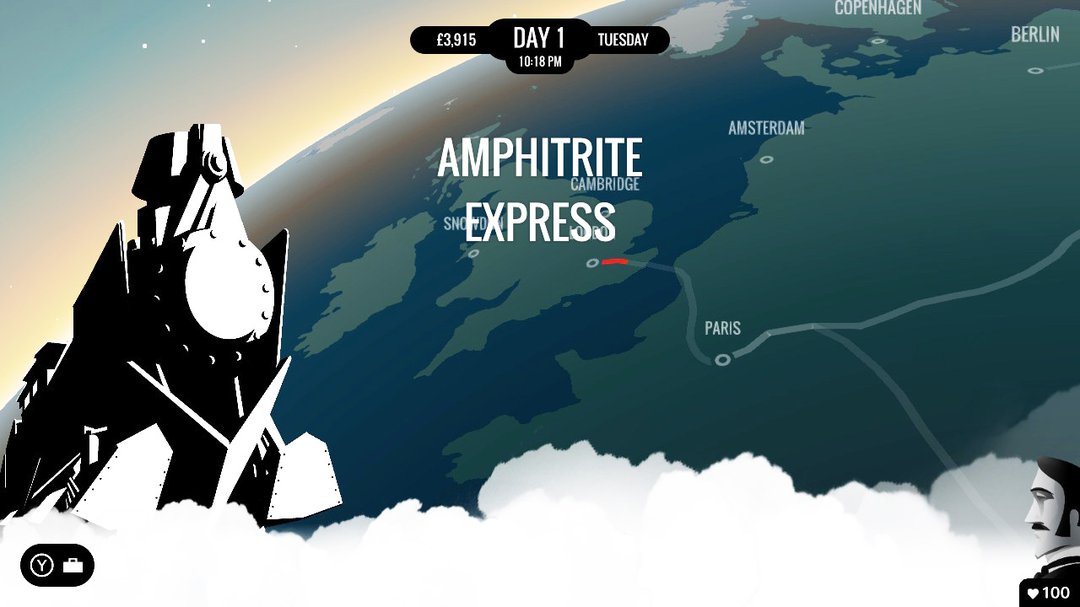 The travel scenes are in fact quite atmospheric. You may find yourself cursing when your little red line slows or detours.

At the same time, the game was working me with its subtle charm like Passepartout talking secrets out of strangers on the Trans-Siberian Railway. It didn’t take me long to realize that the game itself was very well written. In no time I’d dropped my guard, thoroughly sucked in by my joycon-bookended novel, playing while in bed like a kid reading under the covers by flashlight. Each description I read was vivid, each new character I met in my travels a unique individual. Every opportunity presented a new challenge of wits, every new danger potentially hiding a shortcut that might shave days off our journey (or add to it if we weren’t careful).

I started to wonder what new curiosity I might uncover en route to my next destination, and I found myself relishing that feeling of leaving a city, wondering what awaited me on the road ahead. However, the game wasn’t done with me, yet. What I’d grown accustomed to, buying belongings to sell at my next stop, managing the fatigue (health bar) of Mr. Fogg, scoping out the most efficient routes and making sure we had the money to buy passage, that wasn’t yet everything the game had to throw at me. When an unexpected turn resulted in our course changing from eastward to almost directly due south, a detour that would cost us who knows how long, and a slap in the face to what I’d paid for, my jaw nearly hit the floor. I won’t spoil too much for you, but let’s just say it involved inciting munity on our vessel to help “correct” its passage. No guts, no glory, after all! 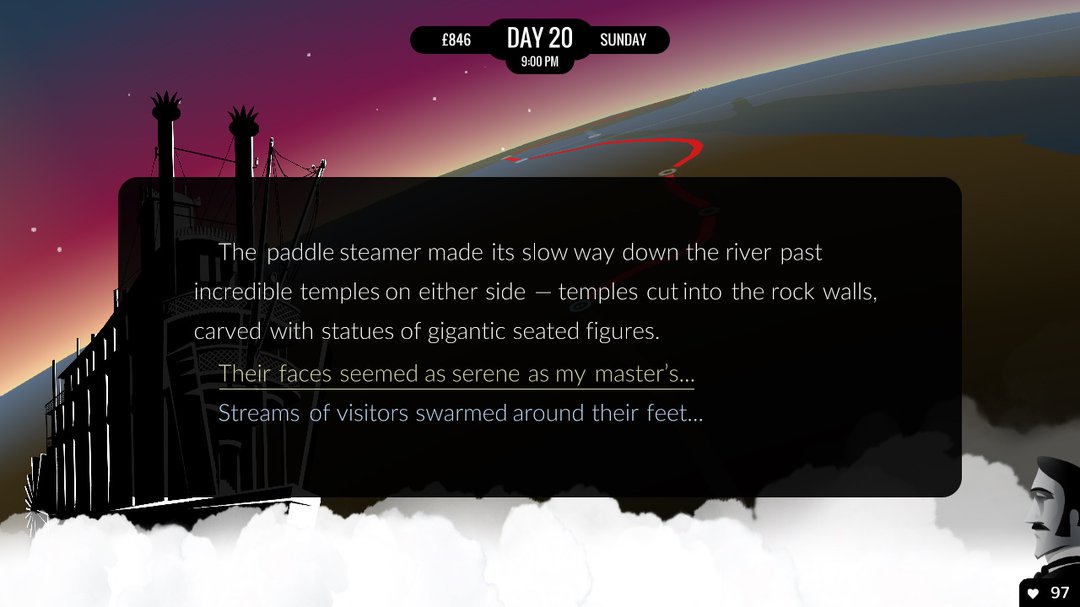 Sometimes the outcome of your story isn't so obvious based on the choices. Just trust your gut and go with the narrative you want to write for yourself!

I was initially hesitant about the format inkle took in creating 80 Days, but having played a bunch of it now I honestly can’t imagine it being any other way. To build a game with this kind of scope in 3D rendered graphics would be an immense project. Who knows if such a game would even run on a Switch! By making the majority of the game text-based, it’s capable of pulling a much “bigger budget” effect through engagement with the player in that most time honored of game practices: imagination. I’ll say again that the quality of the writing on offer here is really top notch, and at no time did I feel broken in the immersion of what inkle had created. What we have here is something that’s akin to an interactive storybook, and it’s totally engrossing. The creators say that the game has nearly 750,000 words, which is about 12 times the amount of writing in the novel on which the game is based. Which means in a single playthrough you’re likely to see about 3% of the total content (according to the developer). That’s quite a bit of replayability!

80 Days on Switch follows in the typical footsteps of what Switch games do, usually the last system in line to receive a title. In this release you get all the additional content that’s been added to the original release over time. That’s a lot of extra adventure in a game that lives or dies on the story it tells. Fixed though it is, there are many branching choices that affect your journey, so the additions are all welcome. They ensure that even if you’ve travelled between points A and B before, there might be a new secret to uncover. Maybe an unexpected “setback” you quickly avoided the last time could be coerced this time into speeding your journey along. Do you trust your fortitude and silver tongue? 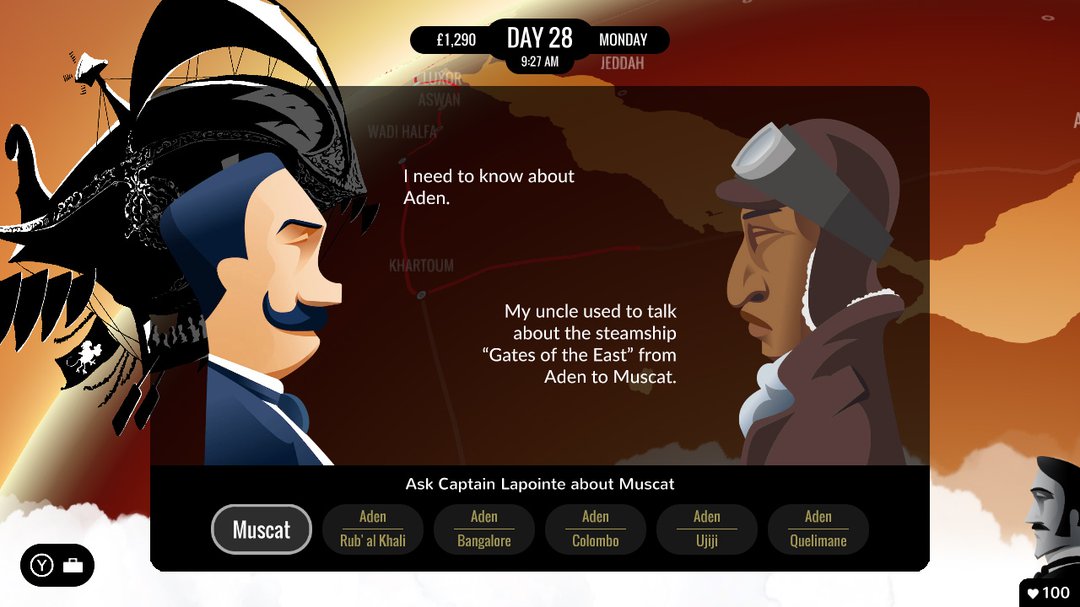 Asking around may find you new routes you might explore.

My own journey didn’t conclude in London with handshakes on the 80th day and a large sum of money coming into our possession. It became clear about halfway across America that we would fall short by at least a couple of days. Mr. Fogg blamed the four we spent in a Russian prison as the key setback.

On day 80 of my travels, I met Death. Dramatic, I thought as my adventures were over, literally! I’d forgotten I was in New Orleans, though, and Death turned out to be just another strange person (in costume for Mardi Gras) I recorded in my journal. Relieved as I was that this wasn’t how the game actually ended, I was surprised that the novel still hadn’t snapped shut on me. I’d lost. That was it, and no further amount of play was going to change that. But there was still a journey to finish, still an ending to achieve. We still had to get back home.

And in that respect, I have to give credit where credit is due. Win or lose, 80 Days drives home an adage by Ralph Waldo Emerson that nearly everyone’s heard: “To finish the moment, to find the journey’s end in every step of the road, to live the greatest number of good hours, is wisdom.” Or as it’s more commonly said, it’s the journey that matters, not the destination. My own journey was a remarkable one, and as I finally pulled back in to London, thinking about all the things I’d done, all the narrow scrapes I’d slid out of, all the fascinating people I’d met, I found myself remarking that I wouldn’t mind giving it another go. Maybe try some new paths, experience some new adventures. And yes, maybe next time come away 20,000 pounds richer. 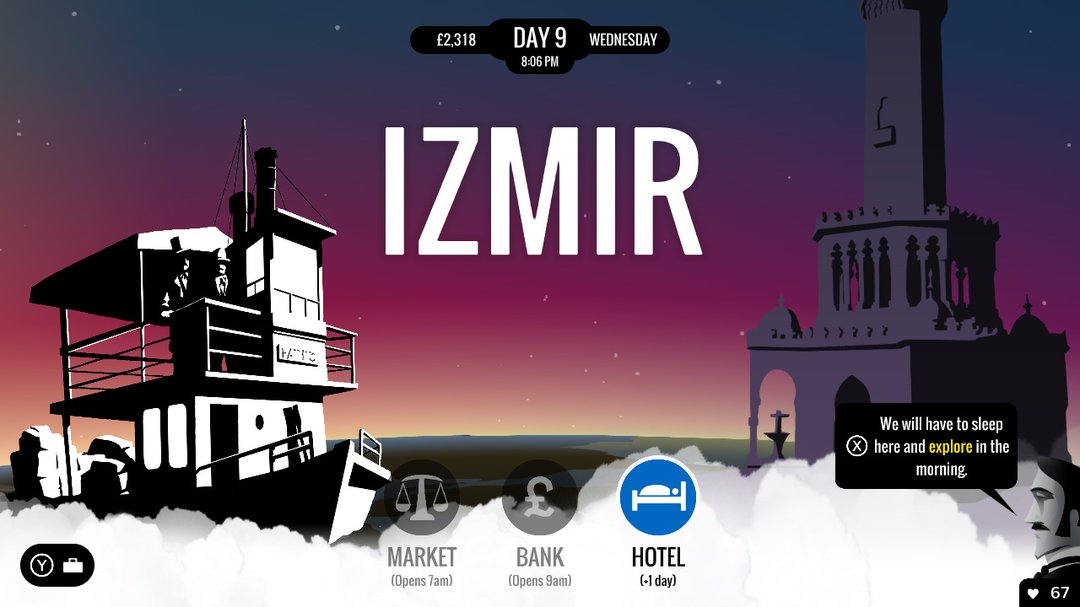 How you manage your time in cities is just one aspect of your journey. Your cash flow, speed along your routes, and even Mr. Fogg's well-being are all your concern.

If you couldn’t tell by now, older as this game is, though it’s new to Switch, I think 80 Days is an absolute gem. It does exactly what it sets out to do. In this title you get a world full of adventure, branching choices, and simple but engaging systems to keep you feeling elated when you shave days off your journey or cursing under your breath when your plans don’t pan out. Can you make up that time later in your travels? The game dares you as much as Fogg himself must’ve felt back in the club when he’d made his wager. And frankly, at a price point of $12.99, this game won’t cost you like it costs Fogg to draw on his lines of credit when you find yourself broke in San Francisco.

A perfect bundle of adventure wrapped up in a reasonable price point, and now portable on Switch. What more could you ask for out of an adventure title? I think inkle has clearly set itself in front of the pack when it comes to unconventional adventure games. So if you’re the type who loves a good narrative, and even if you’ve only been curious about adventure games, I urge you to check out this title. Your own journey, as most in life, will be time well spent.