Roll and Write games are all the rage with the kids these days! Roll some dice, choose how to distribute the results, and write your decisions in on your play sheet. They’re so popular, in fact, that they’ve spurred on a whole offshoot of (Blank) and Write titles. Welcome to…, the popular game about building a burgeoning suburb, is more of a Flip and Write (using cards rather than dice for the dim sum style of options players can partake of). Cue the novel design that’s under review today!

I’m talking of course about ClipCut Parks, the new Roll and Cut? Cut and Stack? Wait, we’re not writing on anything? I suppose it was only a matter of time until we got to this point. What began in Roll and Write territory, taking a single disposable player sheet and messing with it, has reached yet another new development. In ClipCut Parks, rather than writing, we’re literally living on the cutting edge! Get it? Because of the scissors—

I’ll just get on with the review. 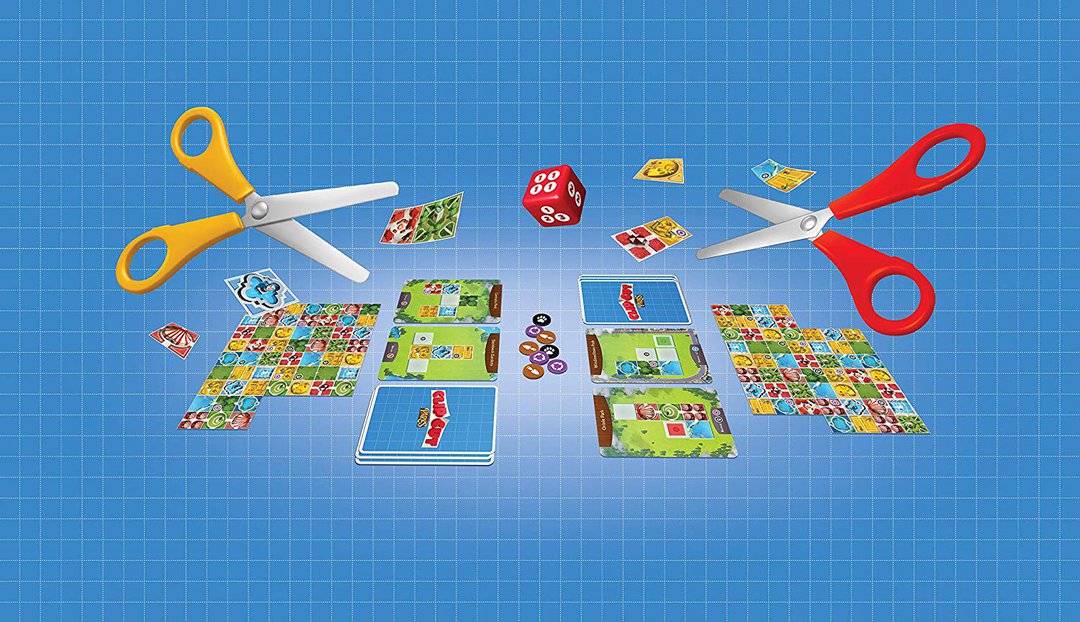 Some scissors, a pad of player sheets, a single die, a handful of tokens, and a deck of cards (along with some extra "hard mode" cards). Renegade's got the small box thing down!

Cutting Right To It

ClipCut Parks is as simple to teach as any of the great Roll and Writes preceding it. To start out, each player gets 5 cards with various parks to build on them; they’ll be clipping out sections of their player sheets to layer on top of these “blueprints” and the winner is the one who can clear all five first. They’ll have two at any time face up in front of them to work on, drawing from the other face down cards when a park is completed. On each player’s turn, they roll the die and all players make the indicated straight cuts of varying lengths on their park sheets. If a piece becomes completely cut loose from the main sheet, it’s either immediately slotted into an available park card or crumpled up into a little waste ball. We could practically start playing a game right now!

Of course, if you thought this was going to be as simple as breezily clipping out some shapes from your sheet and casually dropping them onto your blueprints, you were wrong! These blueprints have special requirements sometimes requesting a specific color of park attraction slotted over a space, or perhaps one of a couple special symbols you need to do much the same with. As you complete your cards you’ll earn special listed bonuses, potentially gaining you valuable tokens that allow you to ignore space requirements on future builds or even the ability to make even more cuts on your sheet. The potential tempo increase these cut bonuses give you is tantalizing, as you’ll be not only pulling further ahead of other players’ setups but also potentially chaining one completed build into another, earning chain bonuses if you can set yourself up just right. 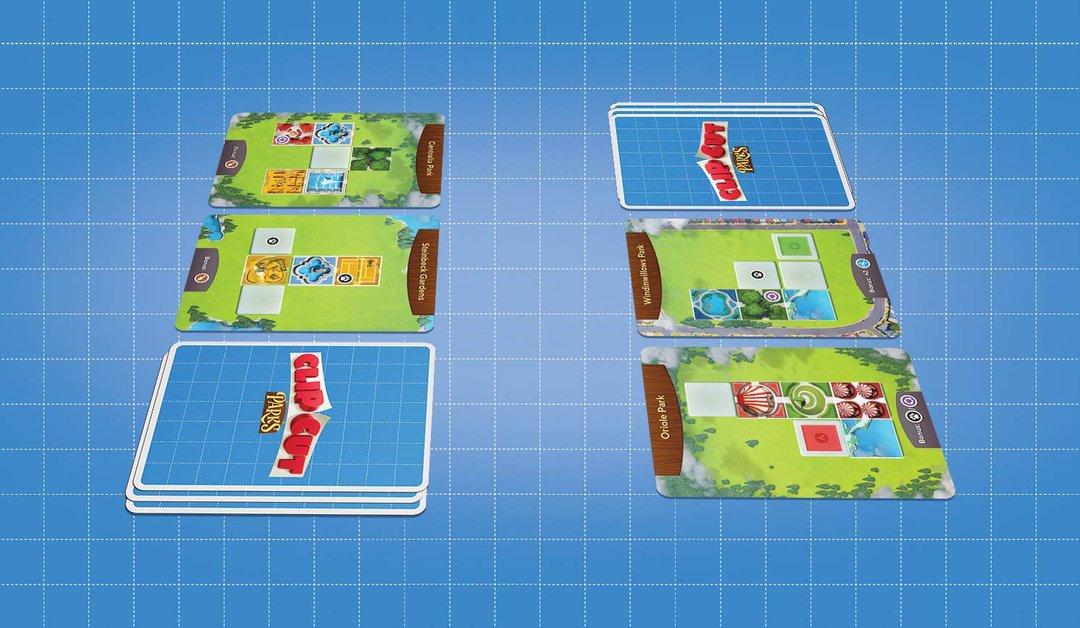 Example of incomplete cards with some shapes cut to fit them.

ClipCut Parks is surprisingly charming. Along with that satisfaction of, win or lose, sitting back and looking over the tiny parks you’ve built, it’s a nice touch to see that there are several different graphics used on each color square of the player sheets. As you clip and lay pieces down on your park cards, the spaces you construct take on quite the character. Maybe my park has lots of green space and a tennis court. Yours has a pool and a campground. Our other player just has loads of tents. Maybe it’s a circus, or maybe it’s an open air food court. Who knows? But it gets your imagination going, and that’s no small thing. Before you ask, the player sheets are asymmetrical rather than identical. So even though there are about a hundred different ways we could distribute the same cuts differently among our sheets, combining them with our different cards, there’s more variety still in our starting positions being different as well.

So who isn’t ClipCut Parks for? If I’m being completely honest, not many people. The game is so easy to play, while giving a fair little strategy crunch, that I can see it being popular with plenty of groups and families alike. Perhaps those looking for heavier games won't be fully satisfied here, but I'm sure you already suspected that looking at the small component list. All in all, the biggest concern I had here was with good old Analysis Paralysis. That is, folks who want to calculate about 15 cuts ahead on every roll of the die, slowing the game down to a grinding pace. The recommended play time printed on the box is 30 minutes, and I’d venture you could even knock out games faster than that with some familiarity in this game’s systems. If you’ve got a particular friend who takes a long time every turn, you might find this game a little more frustrating to play with them. Keep in mind that all players make cuts every turn when the die is rolled, which means friends or family proned to AP will be slowing things down all the time. We had a similar issue with Hokkaido, another Renegade title we reviewed a while back, and while I won’t say it’s a deal breaker it is certainly something you may want to consider.

Sample player sheets. It's always nice when the small visual details stand up to scrutiny at close range.

All in all, I think if you love Roll and Write style games, or you’re looking for something breezy yet crunchy to enjoy with friends, you really can’t go wrong with ClipCut Parks. The cutting element is novel and entertaining, and it’s always fun (or frustrating) when you realize you’ve boxed yourself into a corner with the cuts you’ve made. In some ways it’s a really funny game with the way it enforces a strict “no takebacks” rule. Not that I mind letting newer players take back moves while they’re learning, but the permanence of the cutting makes players come to terms with the decisions in a real and very amusing way. It’s always funny to chuckle at the griping of your opponents as long as you can also chuckle at your own misfortune.

I know I mentioned it before, but if you’ve played Hokkaido by Renegade and you’re also a fan, you’ll be pretty safe with ClipCut Parks. What we have here is another solid, small game by a solid publisher about flipping around shapes, drawing order from chaos and possibility, and sitting back enjoying the view of your creations. For a small box game with a novel concept, you can’t really ask for more!