If Dungeons 3 were to have a motto, I think it would go along the lines of: in everything there must be balance. Against hordes of evil orcs there are hordes of good-loving drunken dwarves, to suppress the Absolute Evil there exist heroes of light, and to split your game time away from tending to your dungeon is a large overworld waiting to be conquered.

In Dungeons 3, you once again assume the role of the titular Ultimate Evil, who appears mostly as a disembodied floating hand to slap around the forces of evil you command until they get who’s boss and start working, especially those lazy Little Snots. To better put it, the Ultimate Evil possesses the Dark Elf Thalya to be his conduit throughout the new continent that it sets its glowingly evil eyes upon. Your goal is to chase down and destroy all semblances of anything “goodie-goodie,” culminating in the destruction of Tanos, the goodiest of them all (Not a spoiler, the game’s very straightforward about this). 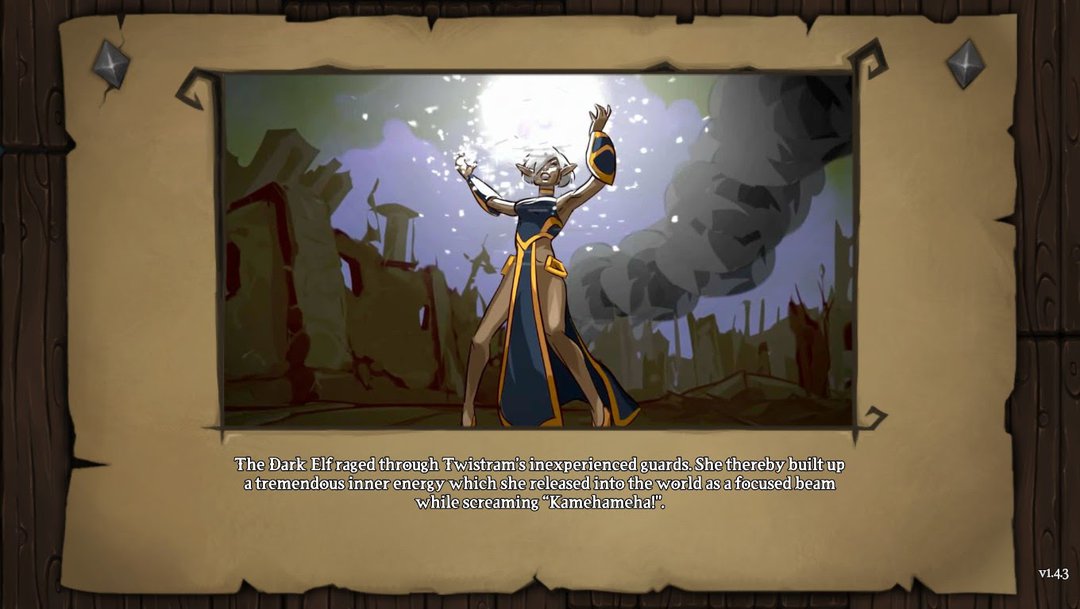 Thalya was on the path of good, but thanks to the Ultimate Evil, she’s back on the right track.

To get to him, you must build your forces from the ground up, similarly to Dungeons 2. Starting with small simple dungeons and basic combat troops like orcs and goblins at the beginning of the 20 mission long campaign, you raise an army of horde monsters, the undead and the downright demonic.

The campaign of Dungeons 3 is addictive, time-swallowing fun, guided by the ever present narrator, voiced by Kevan Brighting of The Stanley Parable. His quick quips related to anything any nerd or fantasy lover has ever seen, touched or talked about make the over hour long mission times pass a little faster. That’s not to say that the missions themselves are boring, if anything they can be a strain on the brain. In later missions, keeping an eye on both your dungeon and the overworld becomes a necessity, meaning that frantic switching between the two has your brain in two places at once. 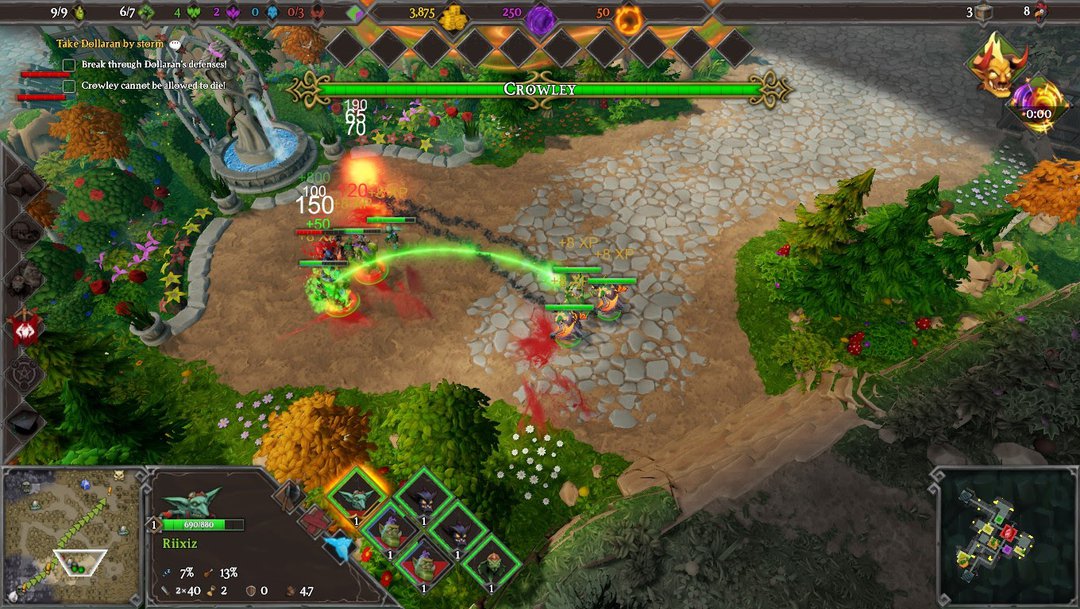 Even during small battles, checking on the Dungeon can reveal something to do quickly.

Missions in Dungeons 3 always start the player off with a small contingent of horde monsters at their disposal, a group of lil’ snots to maintain your lair, and of course a basic dungeon with only the necessities for your army. In classic fashion, going along the course of the game not only your troops will evolve, but so will your dungeon. Most horde monsters can be upgraded into tankier armored versions with new visuals to boot, and new units are introduced at a constant rate throughout most of the game. To produce and maintain these new units, new rooms have to be built as well to accommodate them, like the mana baths that demons require. Of course, the further you progress in campaign missions and the more powerful units you unlock, the stronger the forces of good get, eventually putting destructive wizards and dexterous rogues to stop you in your evil path of carnage.

Once your forces are built up, you and your army of evil are ready to conquer the overworld and all of its denizens. Controlling your troops in the overworld is much like any other classic real time strategy game, simply highlight your units, click where you want them to go or attack, and they’ll do it. Combat tends to be a frenzy of damage on both sides with very little strategy, although there are some troops that counter others. The troops of your army will mainly be heading towards the various mission objectives that you have (kill some centaurs, slaughter a village or two, you get the idea), essence pools where you can harvest pure evil from the ground as a resource for your research or heroes tents, where warriors of light spawn and head to your dungeon to attack your dungeon heart, the source of your lairs power. 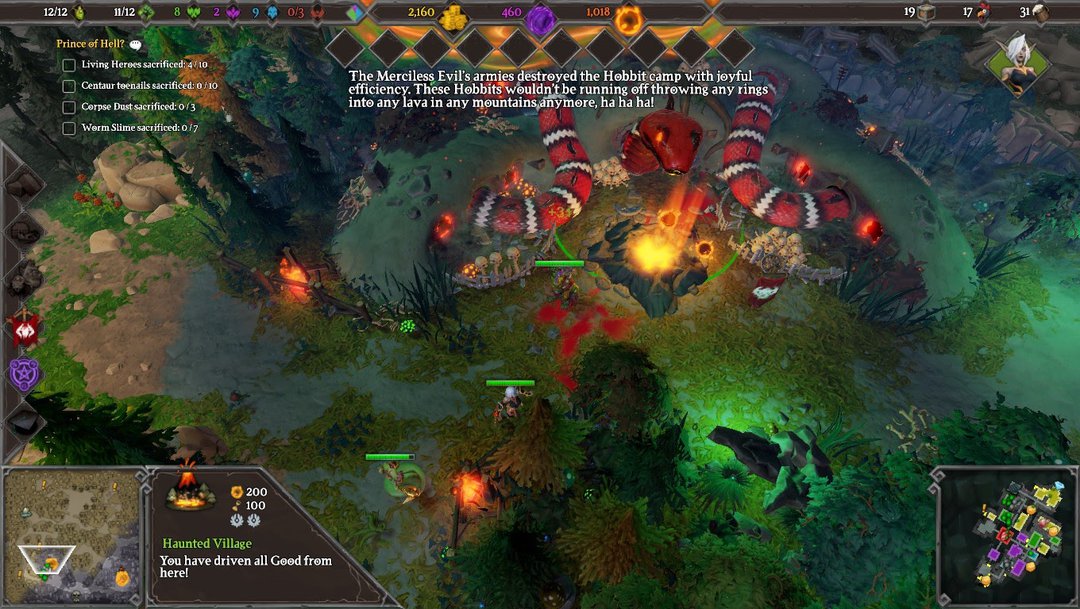 Evil Essence Pools come in a variety of designs, depending on what fairy tail creature was kicked out.

If you prepare your dungeon correctly, though, these heroes may as well be just another resource for making undead troops. Designing your dungeon is easy and intuitive, as simple as clicking and dragging your mouse over an area and letting your Little Snots do the rest of the work. I have to give additional praise to developer Realmforge for including a length by width counter to allow more accurate dungeon building, a small addition that makes a huge difference. To build a majority of these rooms, they must first be researched using evil essence resources, so be sure to plan out what should be researched first. Eventually, a litany of traps can be researched to make your dungeon a haphazard deathtrap for any poor heroic souls that wander inside. 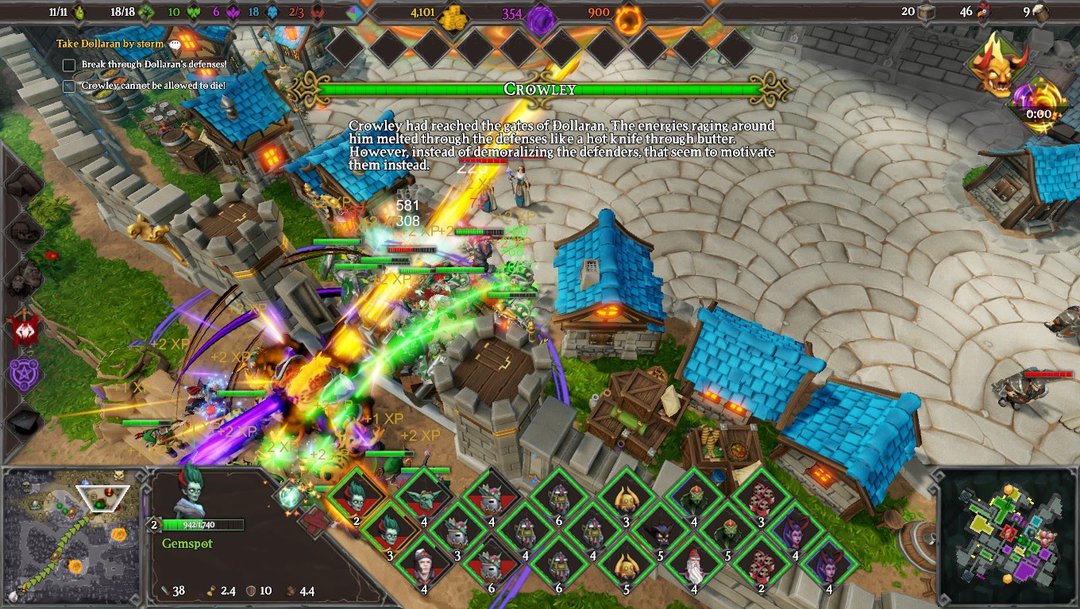 The process of building out your dungeon is satisfying yet frantic. Some missions start with an immediate threat to the dungeon, making me rush to build troops or traps to defend my dungeon. In that rush I would mark multiple places for my Little Snots to excavate and then quickly mark the new spot to become a hideout, where my horde creatures could sleep, or maybe a new treasury to keep my vast gold reserves in. These rooms follow the rest of the game’s aesthetic, cartoonish and popping out of the screen with bright and vivid colors. This can sometimes result in confusion because of the sheer amount of things on the screen, but more often makes for a pleasant display of your handywork to view. 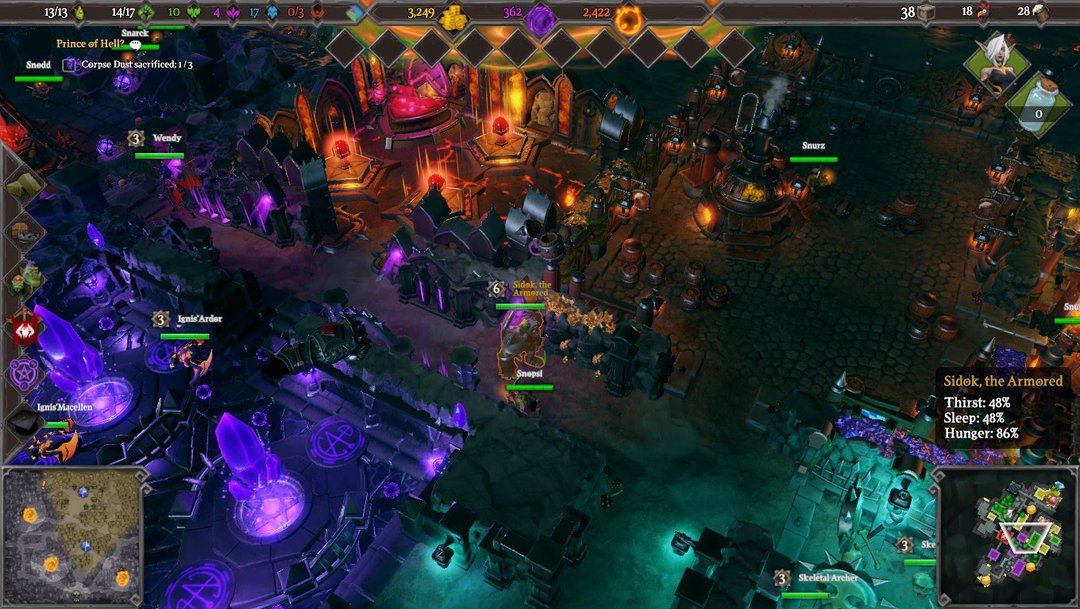 Between various lighting effects and its cartoonish style, dungeons are a treat to look at.

Dungeons 3 isn’t a complex dungeon builder or real time strategy, but is instead a balanced combination of the two. The ways that the dungeon and the overworld interact with each other make your conquering of the overworld feel that much more enjoyable, and I have to admit, there’s nothing better than sending out a horde to strike down some holier-than-thou hero. So if you’re a fan of building dungeons and conquering towns, and especially if you despise everything good-aligned, Dungeons 3 is the game for you.