The Last of Us Review

The Last of Us

The zombie apocalypse genre has been on the rise lately, and with it we have explored every trope imaginable. Humans being the real monsters, oppressive governments, father-daughter relationships, and more have all been explored to death, each story having less of a profound impact than the last.

So, what makes The Last of Us different? It uses quite a lot of these tropes, and in fact, seems to tread a lot of the same ground. However, it doesn't treat the player like they've never seen a zombie movie before. It uses this world we are all very familiar with as a tool to tell its own story, and with that comes two of my favorite characters to ever appear in a video game.

One of its greatest strengths, perhaps, is that it was not initially conceived as an apocalyptic game, but a game about the relationship between two characters developing over a long period of time. The game does this flawlessly, and thanks to the technical prowess of the team at Naughty Dog, it isn't only well written, but well executed.

This game doesn't pull any punches either. Within 20 minutes of starting the game it hits you right in the gut with emotions, and continues to provide one bleak situation after another as the game progresses. It's rough to get through at times, but that's not to say the entire trip is a downer. The characters react to their situation like humans, not puppets. They crack jokes, talk about the settings they pass by, let out a sigh of relief after rough battles, and in general, act like any person would in their situation. These moments of relief are what makes the dark moments in this game so dark, and when it hits, it hits well.

Part of this is due to the fantastic score, which manages to add tension in some spots, relief in others, and pull tears right out of you at critical moments. The audio does well to immerse all over as well; Gunshots give the perfect deafening kick and to weapons, melee attacks feel like they have weight, and the screams of the infected instill just the right amount of fear in you as your fight or flight response inevitably kicks in. All of this would be for neigh if it wasn't for the voice acting, which is fantastic in all areas. Those of you that want a movie version of your favorite games will get nothing better than the game itself, because the actors behind these characters play an integral role in bringing them to life. 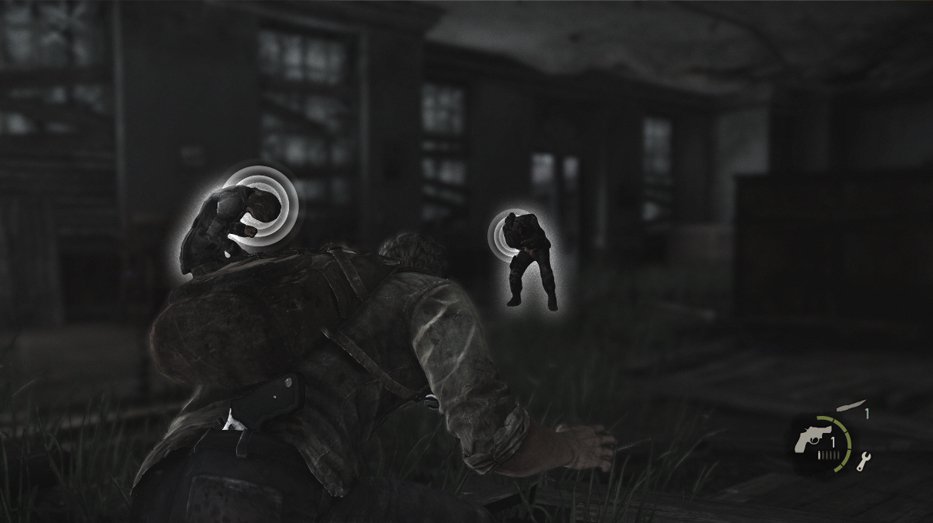 Listening mode is the key to keeping an eye on nearby enemies and getting the jump on them. Don't get too comfortable with it though, the ability is stripped away on Survival, which is unlocked after beating Hard mode.

Now, finally onto gameplay itself. I leave it for last not because it isn't good, but because the rest of this game deserves so much attention. In fact, I think The Last of Us is one of the greatest games I have played in a very long time.

The game plays very much like a stealth game, but it isn't because you're avoiding an alert that will bring in more guards, like Metal Gear. Instead, this game backs you into a corner until you have no choice to push through by any means necessary. I played through on Hard, and found ammo pretty scarce. The only feasible way through was to sneak as much as possible, and to use guns only as a last resort. Because of this, encounters become tense, often making you scrounge for melee weapons and ammo throughout, while ducking for cover to either avoid fire or escape the enemy's sight.

The added stakes of combat carry over to fighting infected very well. These aren't zombies you can just mow down with a gun or an axe. The infected pack as much of a punch as humans, with the added insanity of them booking it right towards you once they recognize you as a threat. Stealth is key to keeping large groups of infected unaware of your presence. The bow offers a long range, but silent way of taking enemies out, even though arrows are one of the most scarce resources in the game. You'll constantly need to craft shivs in order to take out certain infected silently. 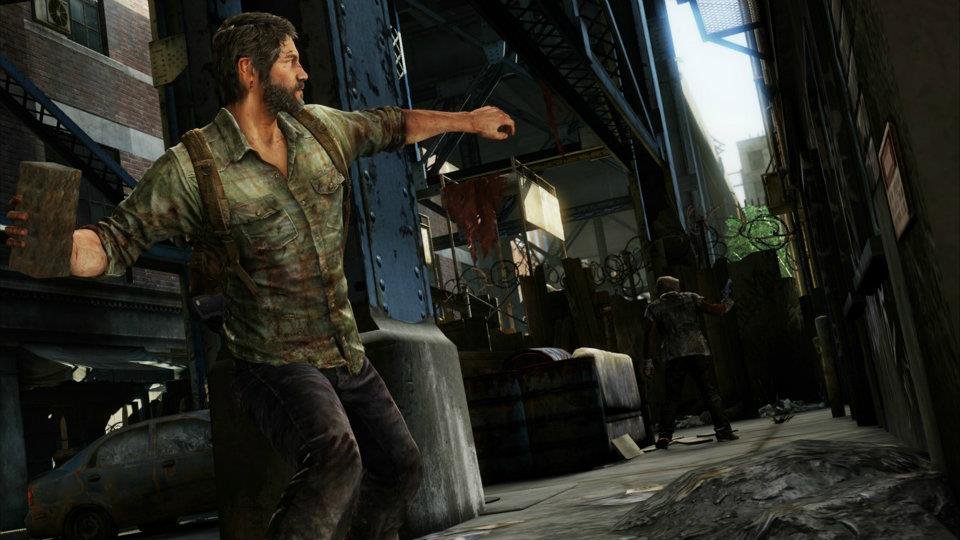 The brick is without a doubt my favorite weapon in the game. Some of you will tell me the bottle is better. Fight me.

Matter of fact, it's almost possible to go through the entire game by sneaking past enemies, only killing one or two along the way. However, this would result in missing loads of supplies, artifacts that supplement the story, and upgrades that will help in combat. This brings the perfect balance of sneaking to avoid wasting ammo and/or dying, yet keeping the tension up by compelling you to scavenge each corner of the environment before moving on. Sometimes I felt the best way through an area was to book it until I found the way out. Others, I tactically took every enemy out until there was no one left. Most of the time though, I snuck until fighting became my only option.

I've left a lot out here, and that's because I think this game deserves to be experienced nearly blind. The adventure taken in The Last of Us will not soon be forgotten in my mind. It started with a bang, carried my attention every bit of the way, and ended perfectly. And that's all I can ask for.

The Last of Us Review Video Games PS3 Naughty Dog