Straight Out Of The 90's 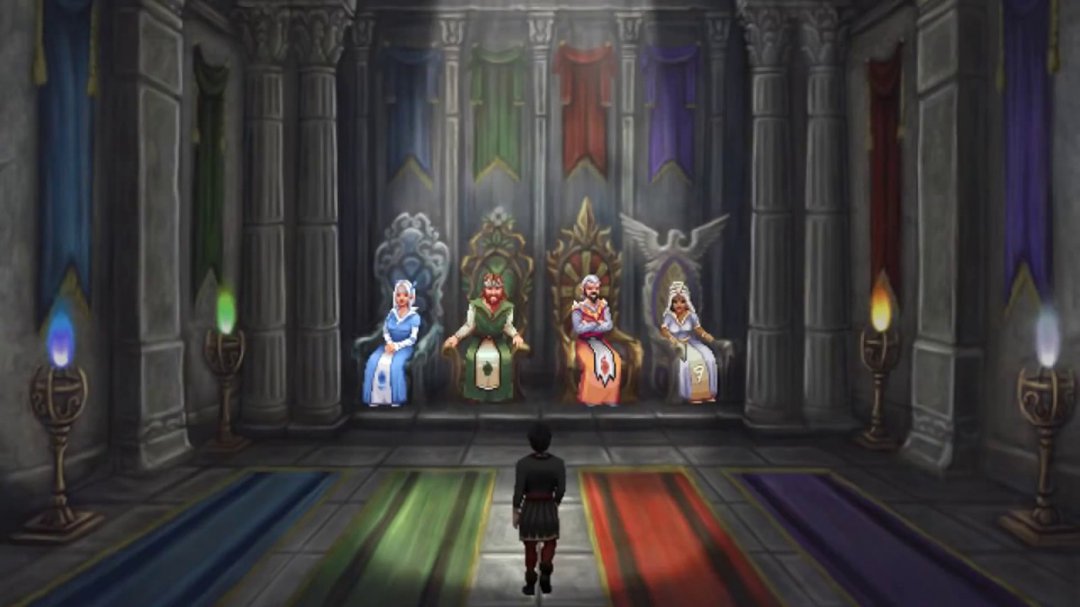 Mage's Initiation: Reign of the Elements

If you're one of my regular readers, then you must have guessed I was drawn to Mage's Initiation because I'm a total sucker for good old point-and-click adventure games. I wrote about Technobabylon and Unavowed last year, as well as Thimbleweed Park for our Finish The Damn Game Month. Mix in my obsession with wizards and magic and we've got a title here I sure as heck couldn't pass up. Especially when it's hailed as “in the vein of the Quest for Glory games.” And yet, despite my initial excitement I stopped playing at what I presume was about halfway through the game. Whether this serves as a cautionary tale or a highlight of the artifice of old will be up to you. 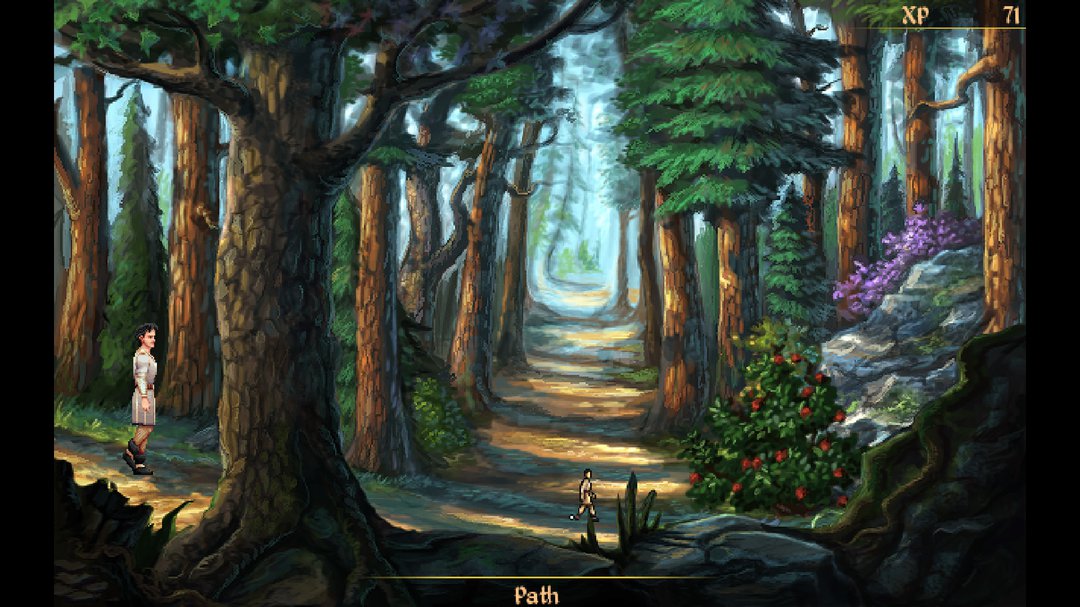 Environments are rendered in lush detail that's evocative of the setting.

A Blast From The Past

Sixteen year old D'arc, our protagonist as the story goes, has come of age. Living his life away from birth parents he has never known, and raised in a mage's tower due to his latent talents, it has come time to prove himself in the trials of initiation into his order. Through a clever series of questions you answer in front of the elemental masters overseeing your tasks, you establish yourself in one of the four elements (air, water, earth, or fire). This choice determines which element you will wield and how you'll use magic in the world to solve puzzles. It also determines your combat style as you fight in the game's real-time combat system. It's an exciting premise that I found delivered—sometimes.

When I say this game is straight out of the 90s in the style of Quest for Glory, I mean it in the most literal sense. For better or worse, this game plays exactly like it's over two decades old, showcasing very little of the modern innovation that I've come to expect from more recent titles like Unavowed. While the art style is on point for the look and feel of the game, the animations are jerky and dated. This becomes especially awkward during combat where you are encouraged to do little more than click madly back and forth, running your character in circles while spamming your element's default spell at baddies. You eventually learn more varied combat spells, allowing you to put up temporary barriers or areas of effect, but these spells are rarely more useful than the standard run-and-gun of the lower levels. Mana also doesn't replenish past a very low recharge bar, meaning if you want to cast your bigger spells you'll often need a supply of mana potions that aren't cheap or easy to come by. 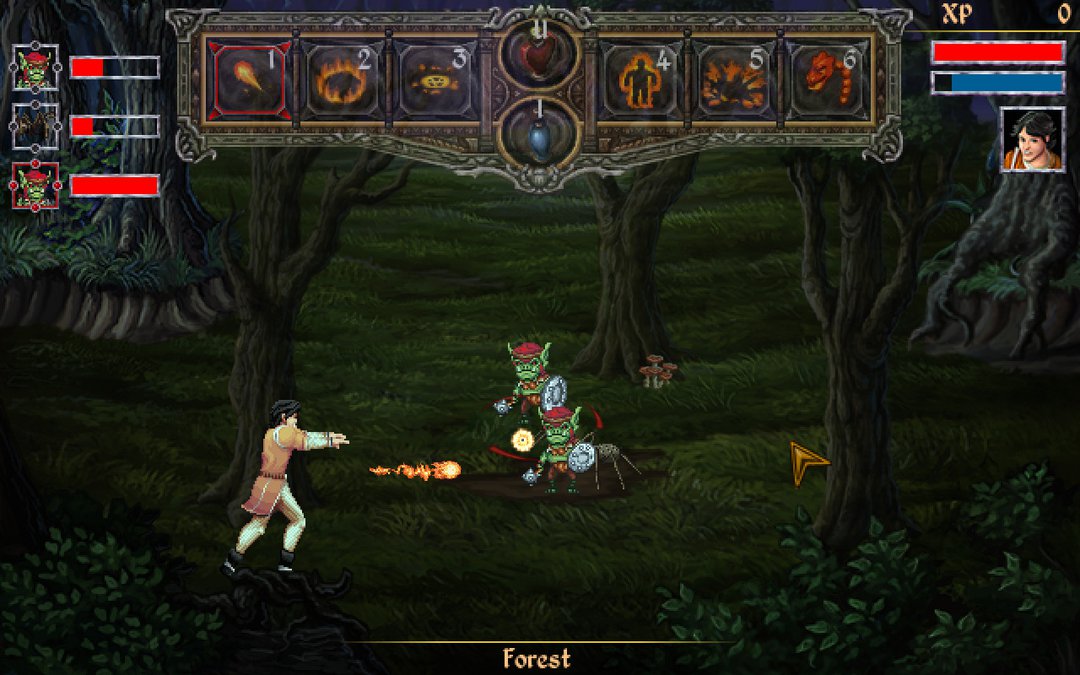 Combat looks thrilling as a still image, but in practice it's little more than clicking in circles while spamming the spacebar. Just like the good ol' days!

The voice acting gets a special shout out in that I found it particularly grating. D'arc, while voiced in what I can agree is a rendition of a teenager set in a fantasy world of yore, is downright painful to listen to. He's stiff and awkward, though not in what strikes me as an “I'm written that way intentionally” kind of way. He tends to emphasize words in an overly affected manner that makes him sound like he's voiced by someone who maybe did voice acting in the 90s when that kind of thing was in vogue. Mind you, some of the other incidental voices from minor characters, antagonists, and your fellow mages are not badly acted at all. It's a shame that, when it comes to the character centered in the screen 90% of the time, I'd sooner speed read speech and click through quickly than listen to the delivery of his dialogue.

It wouldn't be totally fair of me to say the game has no quality of life improvements whatsoever over older games, though. For example, you can run instead of walking everywhere, and you eventually unlock a fast travel system that saves you from traipsing back and forth through the entire map as one is wont to do in these types of games. The map areas themselves aren't overly large, limiting how lost for solutions you can get at any particular time. And you can't just straight up pull a bonehead move and die in-game, forcing a stream of neverending saves and reloads. Though you can die in random encounters to enemies that roam dangerous areas. Hope you don't panic if you get cornered by a goblin redcap at low mana! 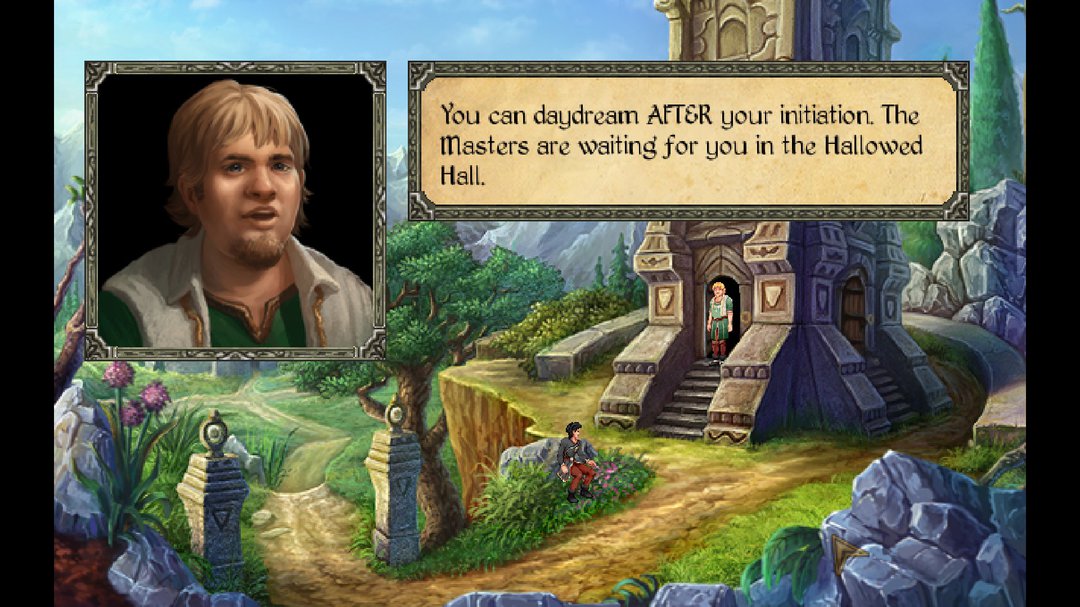 Pretty much everyone but D'arc I don't mind listening to. Shame it's not their initiation we're focused on.

Personally, I would be able to overlook the dated feel of this game if not for one cardinal sin I've seen several times in various games about magic. The game, for all the promise in its name, doesn't actually let you do much magic (outside of the random combat, that is). In completing nearly two of the three initial challenges set forth by the masters, I actually got to use my “magic” action well under a dozen times. I get that the game creators didn't necessarily want the solutions for every puzzle to be an obvious, single magic click, and there will be different solutions to certain puzzles based on which element you end up controlling. But for goodness sake! If you're going to entice me with a game about magic, why am I walking everywhere stuffing into my pockets every random object not nailed to the pre-rendered background so I can MacGuyver them into solutions?! Can I at least use my portable Super Soaker to shoot water in new and creative ways?

What this game needed, in my opinion, was the inclusion of magic into more of the complex, multifaceted puzzles. For example, rather than forcing me to take construction materials to be nailed together into a raft, it would've been neat to see my water mage freeze them together himself. Heck, it would've been neat to see him conjure a couple large blocks of ice to act as the floatation devices for his raft over the barrels I was forced to somehow fit into my pockets like a tribute to Roger Wilco of Space Quest. I'll say it again, that the enjoyment of magic in games is reveling in the ways you use it as an extension of your will and personality to find unique solutions to problems. Sure it's more work in the development of a game, but honing unique and branching paths that allow your magic to shine are what evoke that feeling we so love about playing with the arcane in games. It's certainly more noteworthy than answering a tantilizing questionnaire that determines what element you'll control, only to solve the majority of your puzzles like the mundanes you look down your nose at. 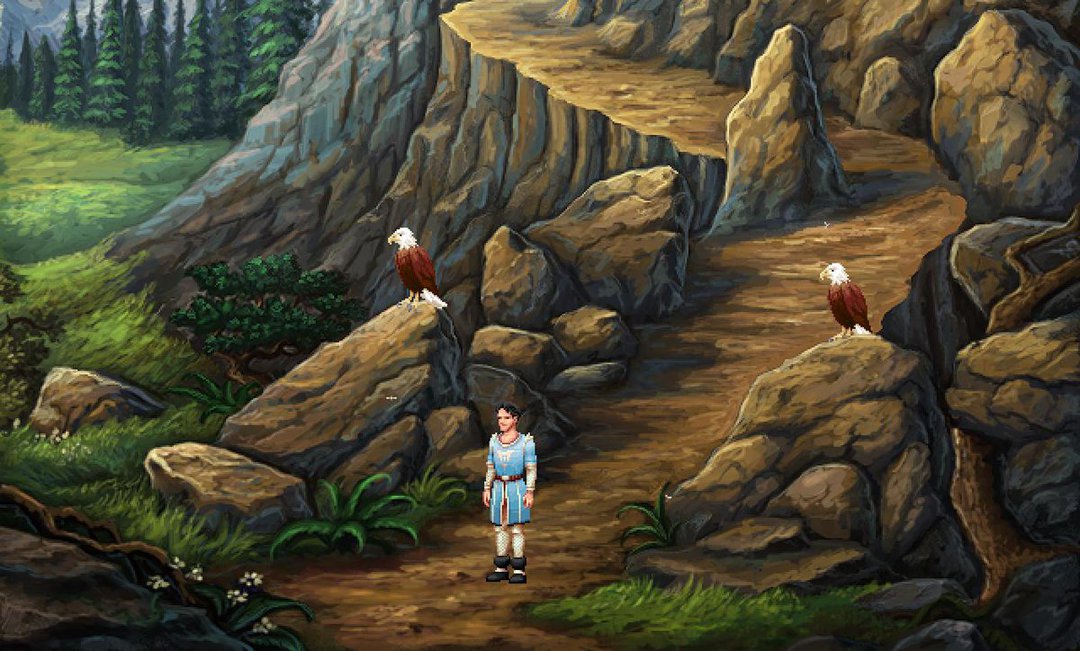 While I don't need to talk to these eagles to pass this challenge, the reality of being a water mage instead of air is that they are effectively a non-interactable element in this screen.

To Mage Or Not To Mage

Despite all of what I see as flaws in Mage's Initiation, my criticism are just that: they're what I personally perceive as flaws. For me, as someone who looks nostalgically back at the old stuff while also marveling at the innovation of newer adventure games, Mage's Initiation felt a little to old, too dated for my liking. I've gone forwards with the more modern adventure titles, and I just can't go that far back in time again. That doesn't mean I wouldn't recommend it, though.

On the contrary, for those that long for the days of old this game is so textbook 90s that I can easily see a large portion of the adventure gaming crowd falling right in line with it. Beauty is truly in the eye of the beholder here, so whether you see an old-fashioned game like this as nostalgic or outdated is completely up to your preference. At $15 it's hardly going to break the bank, so if you're sitting on the fence, it's also not out of the question to simply purchase the game, support the developer, and see for yourself. And if that's still too much to ask, maybe keep this one wishlisted for the next sale.