The Wild West, In Spaaaaaaace

Rail Raiders Infinite is a board game that lets you simultaneously live out your dreams of pulling a train heist in the Wild West and starring in a space opera.

You play as a bandit robbing a space train in the space-future, and your goal is to walk away from it with more money than anyone else. You get that money by finding loot, beating other players in shootouts, and destroying the lawbots who show up to stop you. 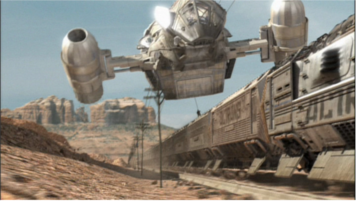 Rail Raiders pushes the Western feel right from the start. The characters in the base game are all various Wild West tropes - the crusty old prospector, the dashing young gunslinger, and so on. The additional characters we got for buying a Kickstarter takes it a step farther, bringing in characters from all of your favorite Western-themed shows: we’ve got Canton Cobb (Jayne), Thorn (Spike), and Typhoon (Vash the Stampede), to name a few. Oh, and the money comes in double-dollars.

Beyond the characters and the setting, the combat mechanics are about as old-timey Western as you can get. Each player has five dice, and each die has a 9, 10, J, Q, K, and A on it. You roll once, and whoever gets the best “hand” according to Poker rules wins the shootout. There are various abilities to let you roll extra dice, or reroll some of them, but at its core the combat is nearly instantaneous - like a duel should be. The moment you throw the dice feels almost like drawing your pistol and taking your shot. 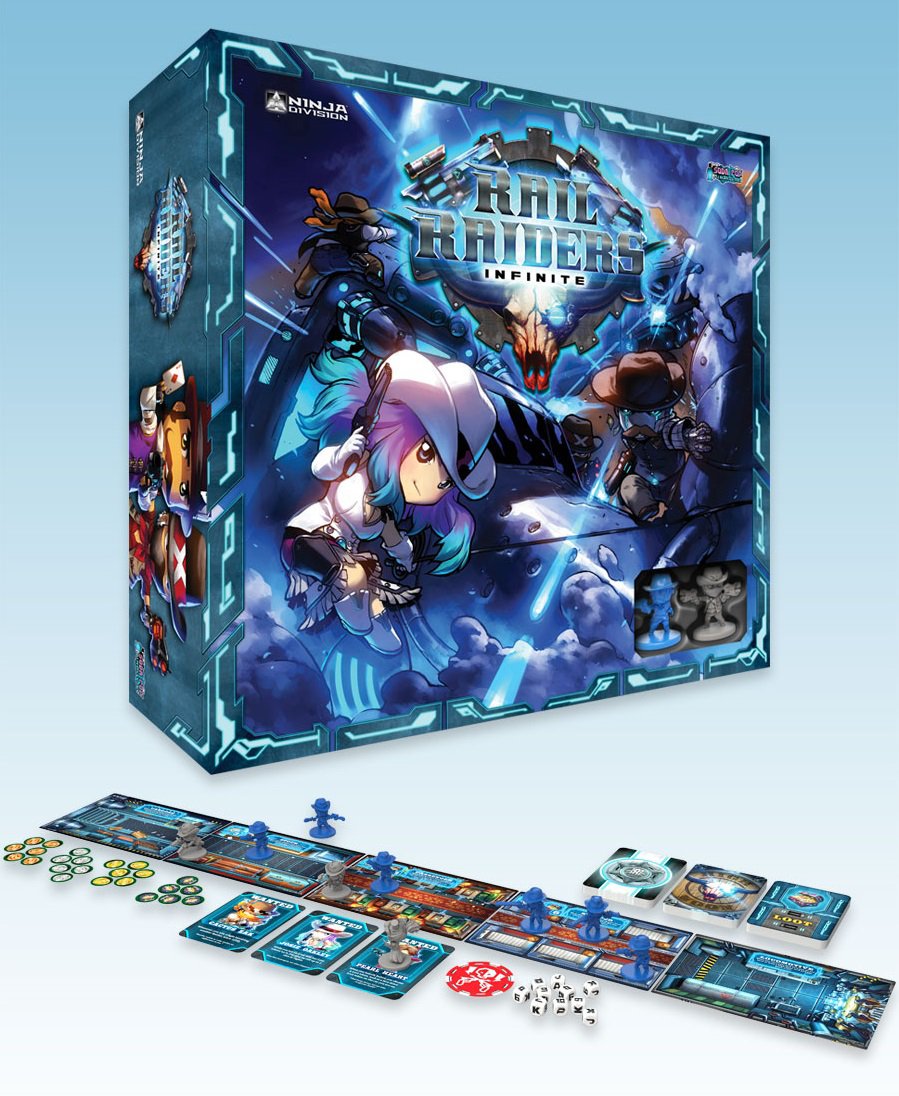 An example of what you can expect in a game is below: the more train cars added, the more chance to find both loot and lawbots.

Rail Raiders also captures that old-timey bar brawl rowdiness in its action. Characters jump from one train car to the next like it’s nothing. Losing a duel gets you knocked into another car or, on rare occasions, thrown off the train entirely. The action is quick, messy, and more than a little silly - for instance, shouldn’t getting thrown through a window in space cause catastrophic decompression?

Rail Raiders is very much an American style game (Wyatt fondly referred to it as “Ameritrash” on our podcast). That’s not a good or bad thing in itself, but it is definitely something to be aware of: there’s no building and very little resource management to be done. It’s all about the action and rolling dice, which there is absolutely no shortage of. Since the game is so dice heavy, sometimes you will have a hot streak that lets you crush the lawbots that stand in your way, or a losing streak that lets your friends always keep ahead of you in cash.

There’s also quite a bit of randomness in the game’s setup. Each train car is selected randomly, and the action is dictated by two decks of cards: the Long Arm of the Law deck and the High Noon deck. Long Arm of the Law cards, which flip according to the instructions on each train car, determine how many lawbots appear in any given car to try to stop your bandits, and whether or not they have any special abilities. High Noon cards, which are flipped at the start of each player’s turn, often causes effects that last only for that turn. The High Noon deck also acts as the game’s timer: when the last card is flipped, the train reaches its destination and the game ends.

This randomness is both a blessing and a curse. It keeps things interesting and increases Rail Raiders’ replay value, but it does mean that there’s a chance that any given game could be either much too easy or much too difficult. You’ll have to judge for yourself whether it’s a pro or a con. 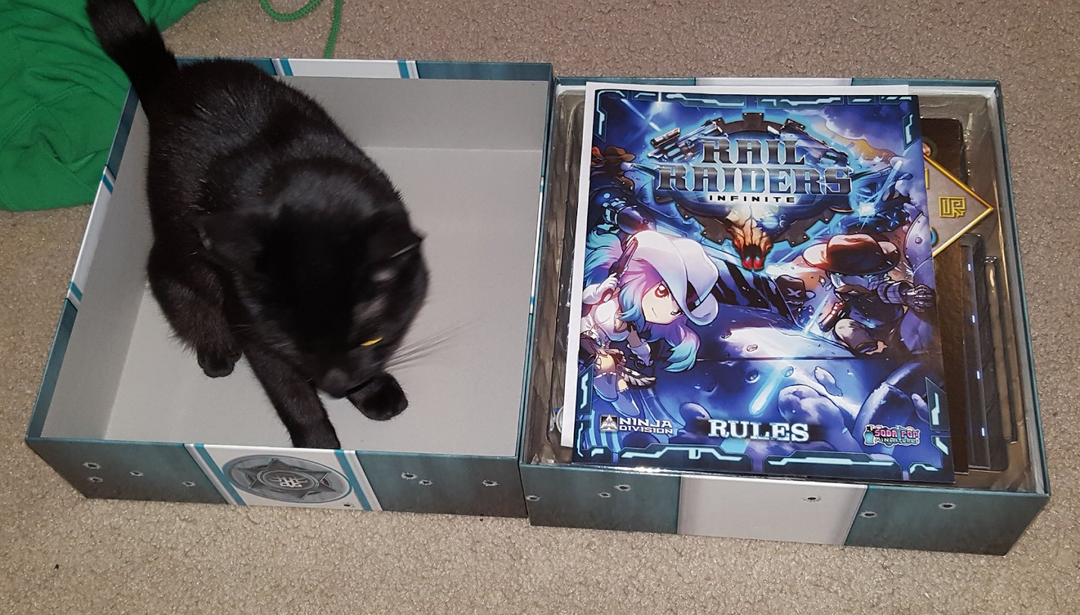 Aliera likes it, but only if we use her house rule that she can eat any minis that get knocked off the train.

Overall, Rail Raiders Infinite is a great game if you’ve got the right audience for it. It’s fast, fun, and cartoonishly silly - Ninja Division’s trademark lightheartedness is definitely on display here. It's great for quick laughs and having a chance roll a ton of dice, and the custom dice help this game nail its theme. It would fit right in at a party or a day of board games at a bar.

On the other hand, if your gaming group leans more toward the slow, methodical, rules-heavy Eurogames like Anachrony, then this game might not be the right choice for you.

So, if a romp through a sci-fi western train robbery with a dash of Poker sounds like a good time to you, or if you’re just a fan of Ninja Division’s work, I highly recommend picking up Rail Raiders Infinite. 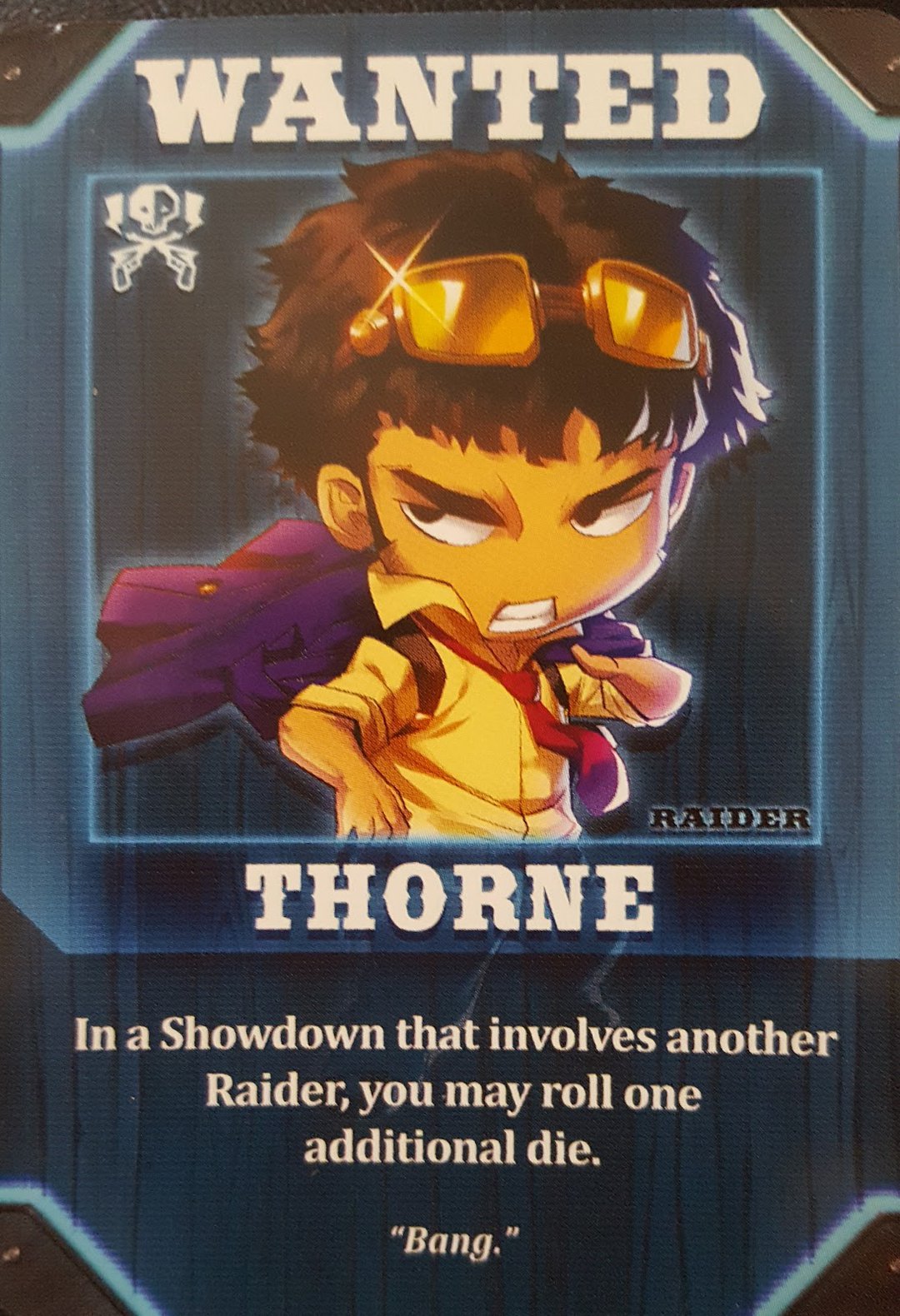