The Good, The Bad, And The Grog 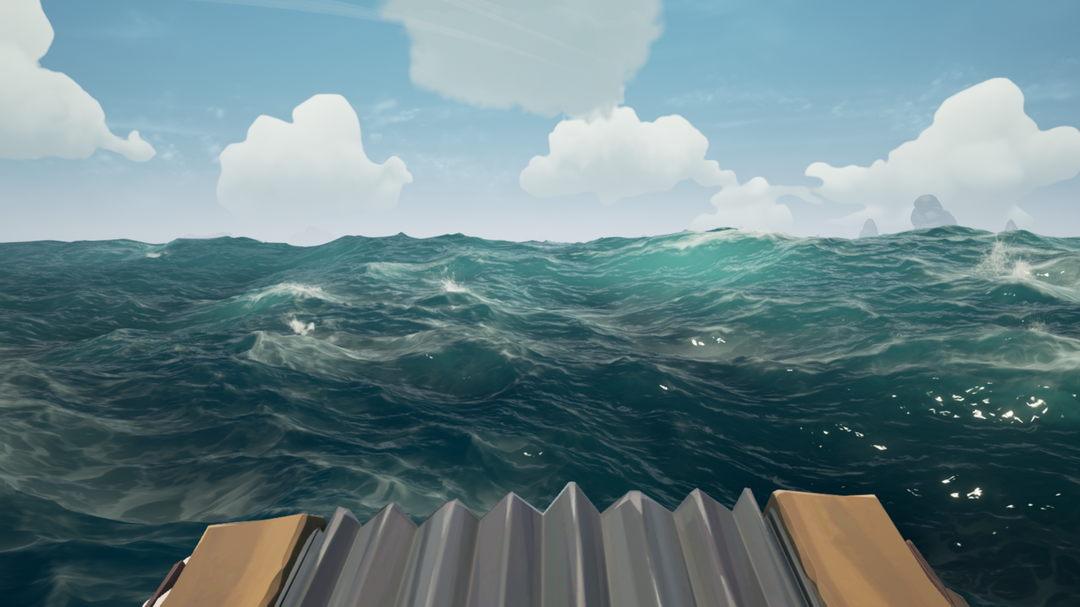 Sea of Thieves is like a seesaw; you can technically use it by yourself, but that’s not what it’s designed for. As a result, what I ended up getting out of it alone was boring, a little sad, and a lot of extra work.

However, when I enlisted a friend, it was one of best role-playing experiences I’ve had. Rare’s laid out a formula for fun with Sea of Thieves, and it’s to play with other people, preferably friends you can speak with. If you deviate from that formula, you’re missing out on everything the game is supposed to be. Not everyone has the means to play this way, (and solo sailing is an option) so I gave setting out on the high seas all by my lonesome a try. 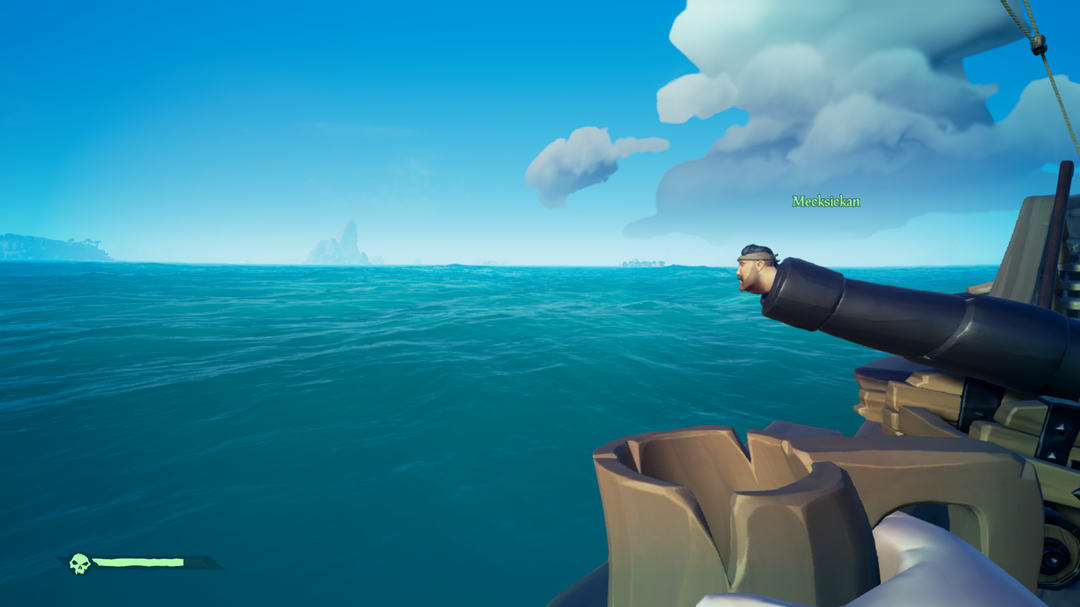 A One Man Crew Flails At Sea

Being a faithful pirate experience, Sea of Thieves took the pleasure of dumping me in the middle of a bar, passed out on a table with no direction. After stumbling out of the dimly lit establishment and meandering on an even more dimly lit beach, I found quest-givers, but the process of figuring out where to go without any markers didn’t feel very engaging, it felt unnecessary.

This is the biggest problem I have with going solo in Sea of Thieves. Whether it be sailing or following riddles to find buried treasure chests, wandering with a vague idea of where to go is a huge part of the experience. On its face this isn’t a big flaw. It might even be a positive for those who hate any semblance of hand-holdiness in games. I personally wouldn’t mind a little guidance, especially considering the alternative.

Still, I can respect that wandering and piracy go hand in hand and under the right circumstances finding your own way can be downright immersive. Being alone is not one of those circumstances. 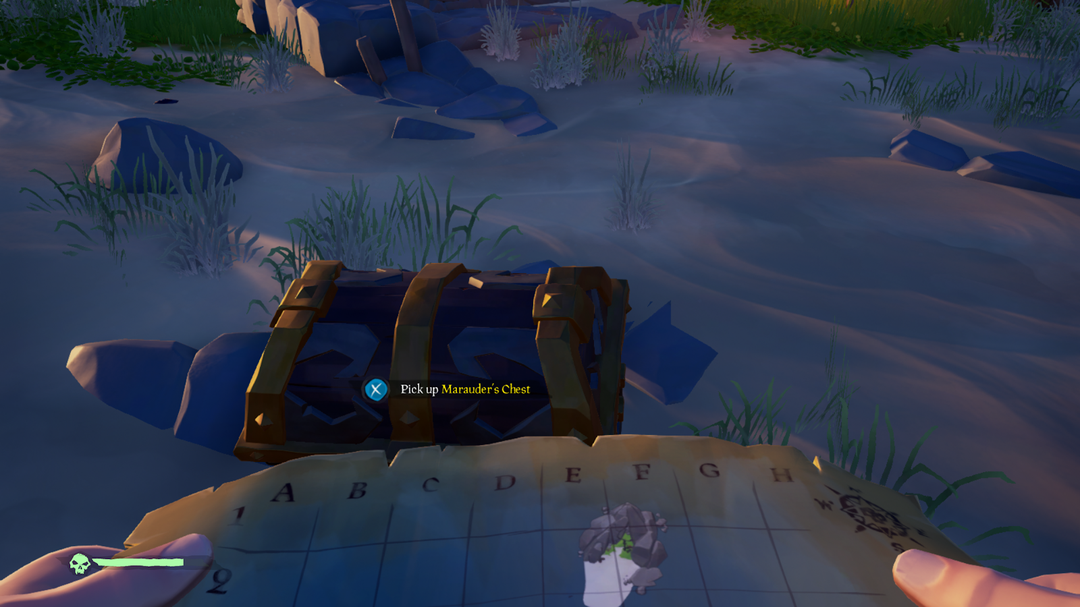 Digging for buried treasure is a great pastime, but only when you’ve got someone to help figure out how many blasted paces to take.

There isn’t much to do when you’re out on the ocean besides soak in the view. The art is absolutely gorgeous, from towering crystal blue waves to a ever-changing sky that showcases fierce blood-orange sunsets, billowing storm clouds, and auroras. It’s a great fit with the cartoonish style, but it’s not enough to make sailing entertaining. What Sea of Thieves could really use more of is random encounters: battles with huge sea monsters like the kraken, whirlpools, random men floating on planks of wood, things that will make the ocean feel alive, even if that means sacrificing a little bit of calm immersion. I understand that running into monsters or enemy ships too often could be frustrating, but it happens way too infrequently to feel considerable (I never came across a single one when we played).

Instead, what brings life to the long voyages between islands is merriment: playing an accordian, dancing on the bow, conversation, laughter, and drinking grog to experience the best in-game representation of drunkness I’ve personally seen to date. Seriously, it’s like trying to stand still on rollerblades with a phoropter strapped to your face and I love it. Maybe you could do some of these things alone, but I think we all know deep down that drinking heavily with nobody around isn’t the epitome of a great time. Besides, chances are you won’t have time to do anything but control the boat. 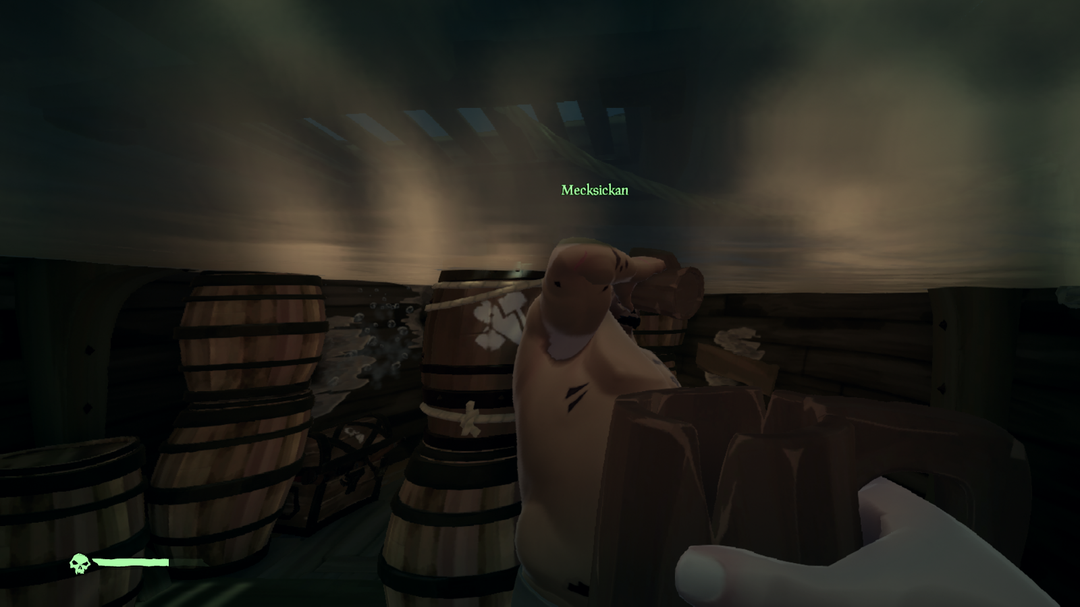 Even on the smaller ship, it’s clear you’re supposed to have a crew. Most of my time running a one man ship consisted of darting back and forth between the map and wheel to make sure I was heading the right way (since, again, no markers) while hoping that I wasn’t heading towards any shores or rocks. Of course, I always was. When I crashed, it started the process of dropping anchor so I wouldn’t go too far off course. Then it was a simple matter of making sure I had boards on me, boarding up all the holes, running back and forth to fill a bucket with water from the hull and throw it overboard, raising anchor, and repeating the dance with map and wheel. Sound like a long list? I know I said there wasn’t much to do on the water, but what was supposed to be an captivating coordinative effort became busy work that felt more tedious than anything else. Granted, a few steps on that list were removed once I learned how to properly center the wheel and ensure I was on the right track without needing to check the map. But blindly hoping an island is still southwest of me feels like an unintended side effect of lacking crewmates.

Getting on shore isn’t much of an improvement. Combat isn’t difficult, but it’s overwhelming. It’s not uncommon to find yourself surrounded by up to six skeletons at a time. Any semblance of timing your swings and blocks goes out the window and fighting turns into mashing attack until everything is a pile of bones. Searching for buried treasure is also dull when you don’t have anyone to workshop the clues with.

However, if you’re the type of person I mentioned who recoils when directions pop up on a screen, none of this save combat will likely bother you. Every step, as grueling as I may find them, is probably a step actual pirates had to take at one point. Even if they didn’t take them alone, you can take solace in that even slivers of realism are conducive to the role-playing experience I think Sea of Thieves is meant to be.

If you’re not that kind of player, or even if you are, just one other person makes everything feel more manageable and engaging while keeping the immersion intact. If anything, it’ll only build upon it. If this person is a friend or someone you can communicate with, the whole experience changes for the better. 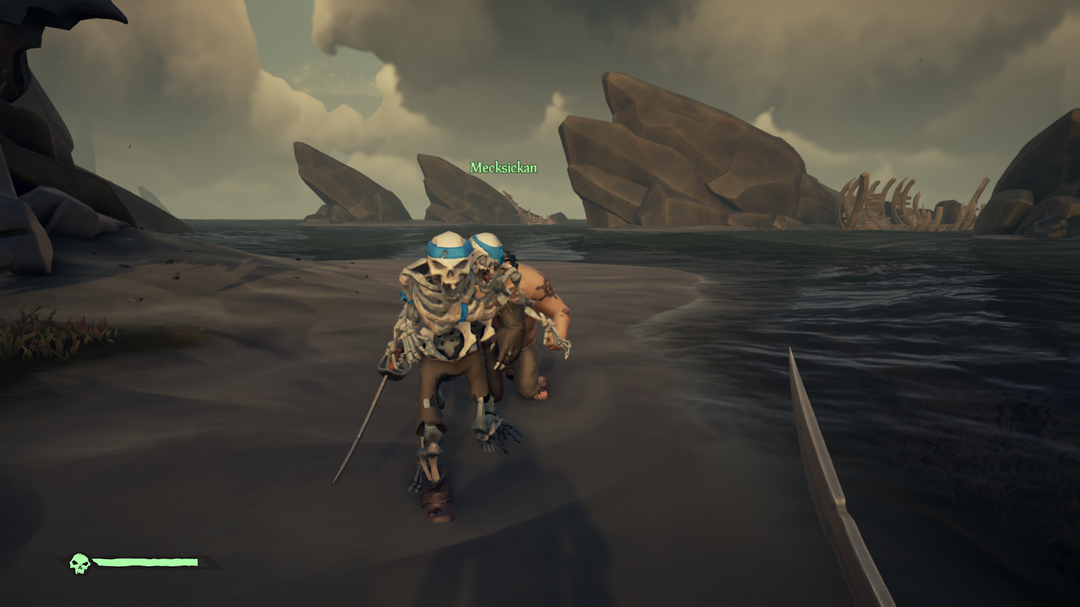 It’s nice to see someone else get attacked by skeletons for once.

Yo Ho A Pirate’s Life For-... Two To Four Players

At its heart, Sea of Thieves is best approached as a role-playing experience. Some things have changed since the E3 announcement trailer, but that much stays true. Maybe you can’t force anyone to walk the plank as is showcased, but moments when you have a cooperative team who’s looking to act out a chaotic pirate adventure together are when everything comes together.

Gone are the days of going in circles through caves on the hunt for treasure, or frantically running around the ship trying to solve every problem on your own, now you can do both while yelling with other people. As weird as it sounds, shouting at someone playing a shanty to help you board up holes as the ship capsizes is a joyous experience.

Sea of Thieves has a woefully low variety of voyages, but it almost didn’t matter when playing with the right people because it stopped being about the voyages, at least temporarily. I had more fun being shot out of a cannon or sinking my own galleon, pounding back tankard after tankard of grog, and throwing up on a friend as we drowned in the brig than hunting a skeleton captain, searching for buried treasure, or collecting cargo. Being a nuisance to other people was incredibly fun because that was the kind of pirates we were. That was my kind of immersion. But it also created the kind of fun that doesn’t last long. 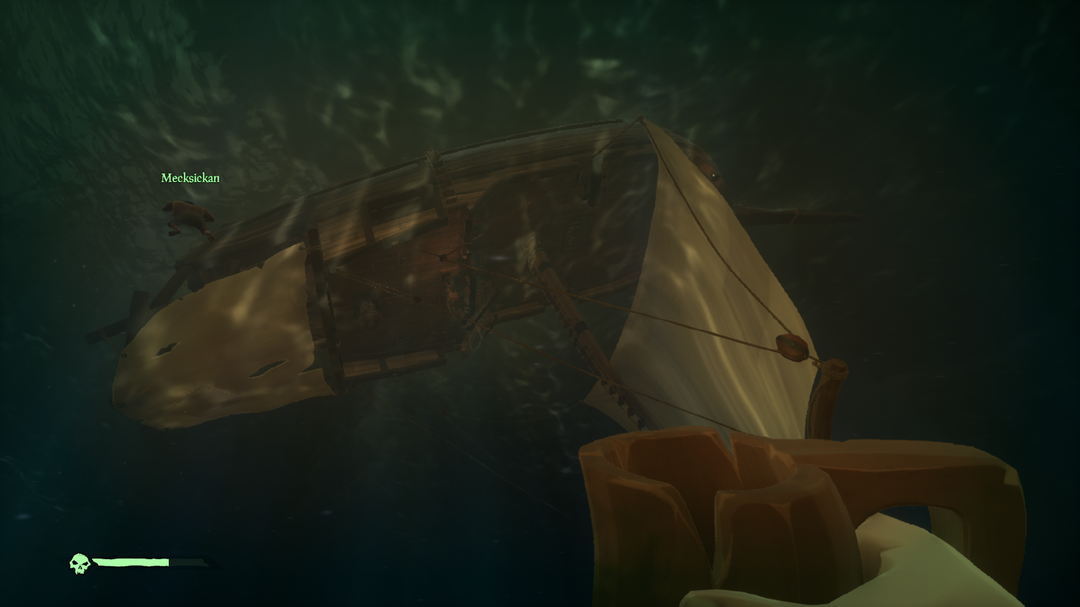 Oops! Did we do that?

The Value In Sea Of Thieves

A lot of parallels have been drawn between Sea of Thieves, No Man’s Sky, and Destiny. None have a great variety of things to do, instead proving to be fun through social interaction. In turn, many questions have been raised about the value of these games. Sea of Thieves suffers from these problems worse than the other two did. With only three types of voyages to go on and random encounters being sparse, there simply isn’t enough to do. Players can only rely on their imaginations so much.

I don’t find Sea of Thieves to be worth $60, at least not yet. Talk to me when more content like The Hungering Deep, an AI challenge with new mechanics, and rewards set for May come out. For now, you shouldn’t pay that much for it unless you’re prepared to make up almost all the fun as you go. What it is worth however, is $10, the cost of a one month subscription to Xbox Game Pass. It’s the perfect product for that service, and if that’s all you buy Game Pass for, you’ll likely be done with Sea of Thieves before the second month’s fee comes around. If you’re anything like me, I would even say that you’ll probably be done by the end of the two week free trial, essentially making Sea of Thieves free.

If you’ve got Xbox Live Gold, give it a try. Mark your map, drop the sails, and raise anchor, but make sure you bring a friend along.