Why Simple is Best

Do you like big board games? I'm talking really big board games. Does your excitement spill across the table in proportion to the amount of stuff that tumbles from the game box? Maybe you own games that have yet to be unleashed on family or friends, but your fingers tremble with anticipation every time you open the game up to take a look inside. If you're like me, you're already checking the "all of the above" box on your answer sheet. A new big game means a new challenge, a new puzzle to solve.

But sometimes, new big games are hard to share with others: some folks go into deer-in-the-headlights mode when the lid comes off. For them, the idea of spending the next two to three hours in epic gaming may seem more akin to sitting down for a root canal. Never fear, dear reader; there is a solution, a middle ground of games that are both simple and yet still fun. Sheriff of Nottingham is a great example, and with that as our focus, let's dive into what makes a board game great.

There are people we try to get to try board gaming - be they friends or family - who lovingly tolerate our penchant for this hobby, but often seem convinced it's a little inappropriate for our age. Don’t be so hard on them though: most folks (myself included) grew up with games like Clue and Monopoly, what we in the hobby call “roll and move games”. Games like Monopoly may be fun to play when you’re younger, allowing banter back and forth as you take each others’ paper money, but they don’t offer much in the way of choices. You roll (randomly) and move (randomly), suffering or benefiting from whatever space you land on (randomly). At most, you make one or two decisions a turn, usually to buy/not buy whatever you’ve landed on, to build a house/hotel somewhere, or to pester your neighbor once again to trade that last orange property you need. It’s easy to see how anyone could tire of this formula after their childhood years. Once the veneer of “being the millionaire” departs with youthful imagination, what’s left seems more like a linear luck-fest.

Sorry if I just bashed your childhood. The good news is, if you still think fondly of Monopoly, then you’re actually one step ahead of me. The ideas in the game still are pretty great, after all. Maybe you love the buy/selling of the game. Maybe you love the deal-making aspect. Perhaps you like set collection and getting satisfaction from completing neat combinations of the same color property. You’re not alone! These are some of the core ideas behind many of today’s board games, capitalizing on trading and wheeling with the other players around the table. Unlike those large games with complex rulesets, there's a middle ground now, where there's more player control in a game, but still that fun of player interaction.. If you like deals, table talk, riotous laughter, and rules that can be explained in under 5 minutes, let me introduce you to Sheriff of Nottingham. 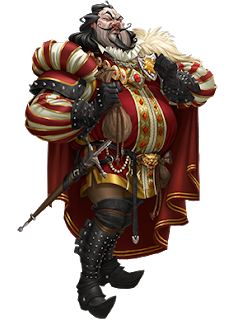 In Sheriff of Nottingham, you are all merchants trying to bring goods into the town for an upcoming festival. You do this by taking between 1 and 5 of the cards in your hand (representing, chickens, cheese and other items) and putting them in a small, velvety pouch, passing them across the table to the local inspector. Each player takes it in turn to be that inspector, the dreaded sheriff, deciding whether to check the bag (potentially paying an honest merchant a penalty for the holdup) or let it through as is. The winner is the one with the most gold at the end of the game. Adding spice to this are special goods which are worth tons more money if you can sneak them in, but that the sheriff will definitely confiscate if he opens your bag (netting you the penalty fee). Still with me? Good! We could start playing a game right now. The rules are that simple. In fact, I’d wager that after a turn around the table, anyone you’re teaching this game to will instantly “get it”.

Let me paint a typical couple of turns for you. It’s your first turn as the sheriff and also the first turn of the game. Everyone passes you their bags. You eye them suspiciously. Liars, every one of them, you think. Gingerly you pick up a bag, toying with the little fastener that keeps it sealed. “How much would you pay me not to open this,” you ask one of your friends, because of course all kinds of deals are legal in this game, and the sheriff isn’t above taking bribes that may profit you both. “Nothing. There are 4 breads in there,” your friend replies. He has to declare some goods when he hands his bag over, but he could be lying. If he’s telling the truth, though, you’ll pay out precious coins to him as he takes his 4 loaves of bread to his stall in town. You tug a little harder at the fastener, watching his brow for sweat. As soon as the bag opens, you’re committed to inspecting it. He levels his gaze back as if to dare you into opening it. You decide to play it safe, passing his bag back. He’s got to be clean. It’s the first turn of the game, as well, and you’d prefer not to take too many risks so early on. A quick look at your other friends’ bags and you toss them back unopened as well. You then erupt in laughter as all of your friend slip their cards out of the bags and line them up in the “contraband” section of their player boards. You don’t know what they just smuggled in. Only that it’s worth more than your poker face.

The art is whimsical and filled with flavor, much like the game itself.

This set up is a delicious recipe for all kinds of shenanigans. What happens when one of your friends keeps lying to your face, only to tell the truth on the one turn where you decide to open their bag? What happens when one person decides to tell the truth the entire game? What if you and a friend are racing to get the most chickens into town, because you get bonuses at the end of the game for having the most of any of the goods, and they pass you a bag declaring 5 chickens? Can you afford not to open that?! Nevermind all that! What are you going to do when your friend brazenly takes contraband from the discard pile instead of the face down cards in the draw pile? They wouldn’t actually try putting those in their bag this turn, would they? No matter what happens, though, a game will last only about 20 to 30 minutes, you will have a raucously good time, and any hard feelings can be forgotten as you shuffle up and play again. This time! This time you will catch those cheats.

Sheriff of Nottingham is clearly the opposite of that cinder-block-in-a-box you were looking to drag off the shelf tonight.. yet, everyone seems to be having a much better time playing it. The tiny David among your board game Goliaths just hit a home run. What’s going on here? Well, it’s got something to do with those same people still thinking fondly of Monopoly. Sheriff of Nottingham cuts past all the complicated rules explanations and downtime needed play to one of your Godzilla-games in favor of something much more important: fun! It remembers the reason you all got together to play a game in the first place, and it cuts right to the action. All the finger pointing, bribery-filled, laugh-especially-when-you’re-losing action. 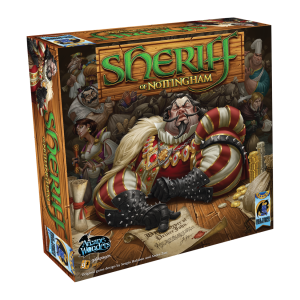 Please remember, dear reader, that if you attempt to drop one of your heavier board games into the hands of people who don’t swim in the deep end of the gaming pool, you are likely to sink them. You can’t just cut to the heavy rule-set; it needs to be built up to. Picking the right game for such a group is all about keeping rules to a minimum while maximizing the fun factor with simple, solid mechanics and theme. Sheriff of Nottingham is a game that delivers this in spades. As a closing observation, the last time I played it with friends, they were immediately keen to have me shuffle up another round as soon as the first one had finished. That is no small thing.

Have a simple game you and your group just can’t get enough of? Want to share your favorite board gaming moment? Maybe you just want to tell me how wrong I am about Monopoly. Please leave me a comment here or on our Facebook. Also, consider dropping some coins in our Patreon box if you like our content. The sheriff took my last copper when he caught me bringing mead into town.