Designed For Kids, Enjoyable At Any Age

While I was at this year’s Bronycon (RIP), I finally got a chance to play the official My Little Pony TTRPG, Tails of Equestria. Much like the show it’s based on, Tails was designed with children in mind, but is good enough to win over fans from all age groups.

Tails of Equestria plays sort of like a trimmed-down version of Overlight - which, if you’ve read Adam’s review of that game, you know is saying something. The one warning I’ll give right off the bat is, if you’re looking for intense, tactics-heavy battles like you’d find in Dungeons and Dragons or Pathfinder, this is not the game for you.

I had never played before, yet I built a character from scratch and was ready to go within ten minutes. Pretty much all you need to do is choose your character’s race and special talent, and maybe make a single decision about your stats. 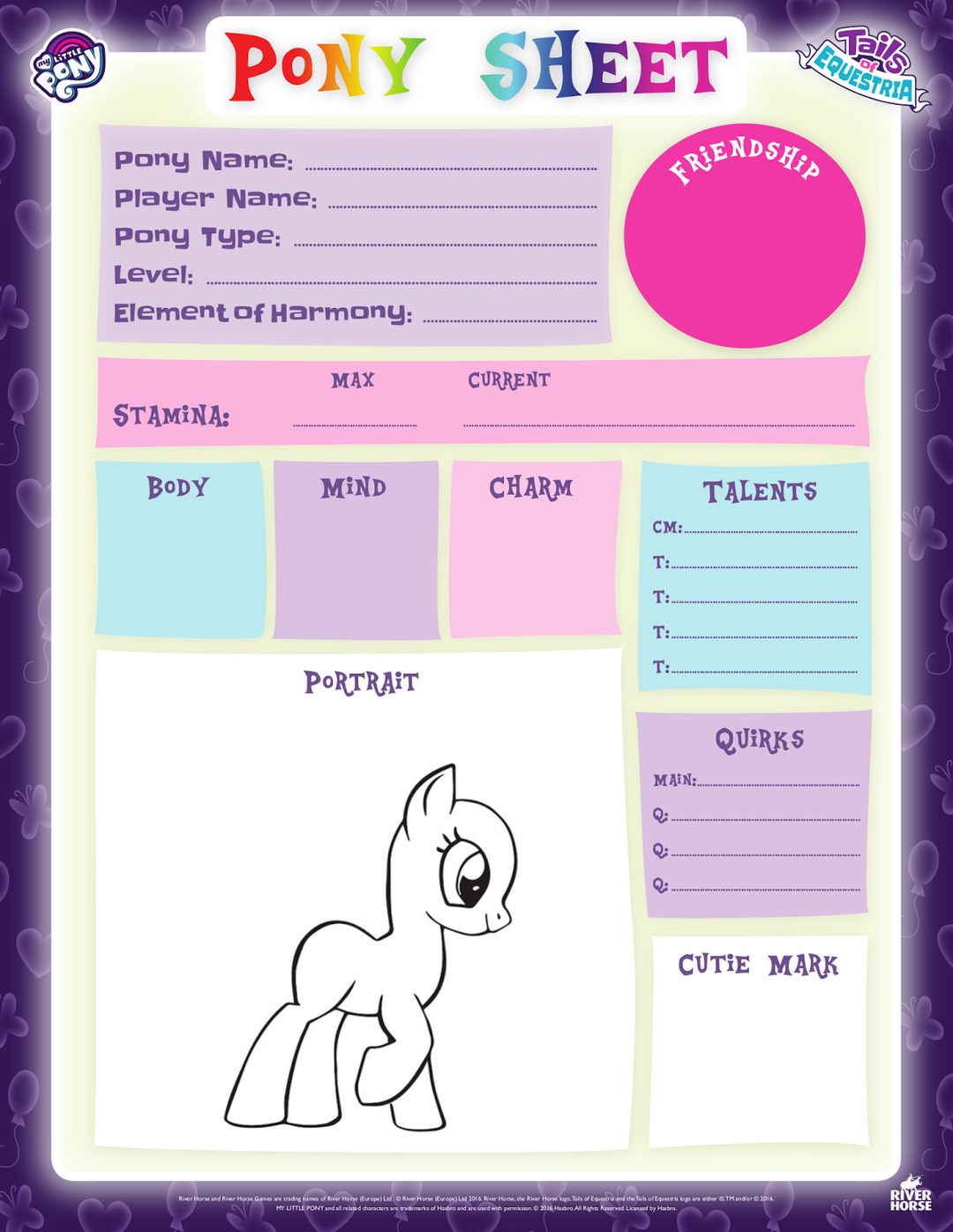 This is your entire character. I decided to play as a unicorn, so the only choice I had to make about stats was whether I wanted my Body or Mind to be higher.

There are a couple of things to note about this character sheet, aside from how simple it is. First of all, while it’s called a “pony sheet” and includes lines for pony name and pony type, later sourcebooks have added races other than just ponies. You can now play as a changeling, a dragon, a griffon, and more. Secondly, there are two things that won’t make sense unless you’re familiar with My Little Pony: Element of Harmony and Cutie Mark. Thankfully, both of those are only meant to be guides for your roleplaying and don’t actually affect the mechanics of the game at all.

If you’re curious, you can find more information about the Elements of Harmony and Cutie Marks on the MLP Wiki.

So What Can I Actually Do?

Enough of the background, let’s get into how Tails of Equestria is actually played. You will notice that there are only three stats: Body, Mind, and Charm. Every roll you make will involve one of them, and each will have a different die associated with it. If you have a talent that’s relevant to whatever you’re currently trying to do, you may also roll the die associated with that talent and take the higher roll.

As an example, let’s use the unicorn that I played at Bronycon. Silver Storm’s Mind stat was a D8, and he had a talent for Stun Ray, also at a D8. If I wanted to do something that involved solving a puzzle or coming up with a clever idea, I would roll a D8 for Mind. However, if I specifically wanted to fire my Stun Ray, I would roll 2d8 (one for Mind and one for the talent) and keep the better roll of the two. 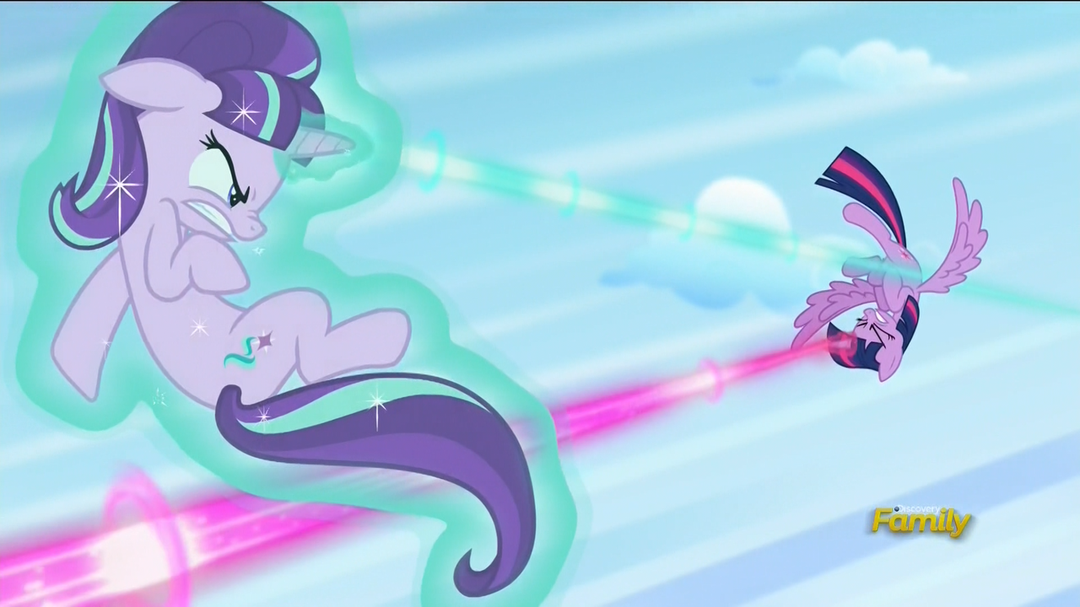 When in doubt, use head lasers!

What’s especially interesting is how Tails handles critical successes. As many gamers know, rolling a 20 on your attack in Dungeons and Dragons gets you an especially epic hit. Tails of Equestria works a bit differently, and you can have a “critical success” on any roll, not just attacks.

If you roll the highest number on your current die, you get to also roll the next die size up. So, if you roll a 4 on a D4, you then get to roll a D6. If you roll a 6 on that, you move up to a D8, and so on all the way up to a D20. Once all the rolling is done, you take the highest number you rolled on a single die and use that as your result. What this means is that, no matter what number you have to meet to pass a check, it’s not impossible - maybe extremely unlikely, but never impossible. 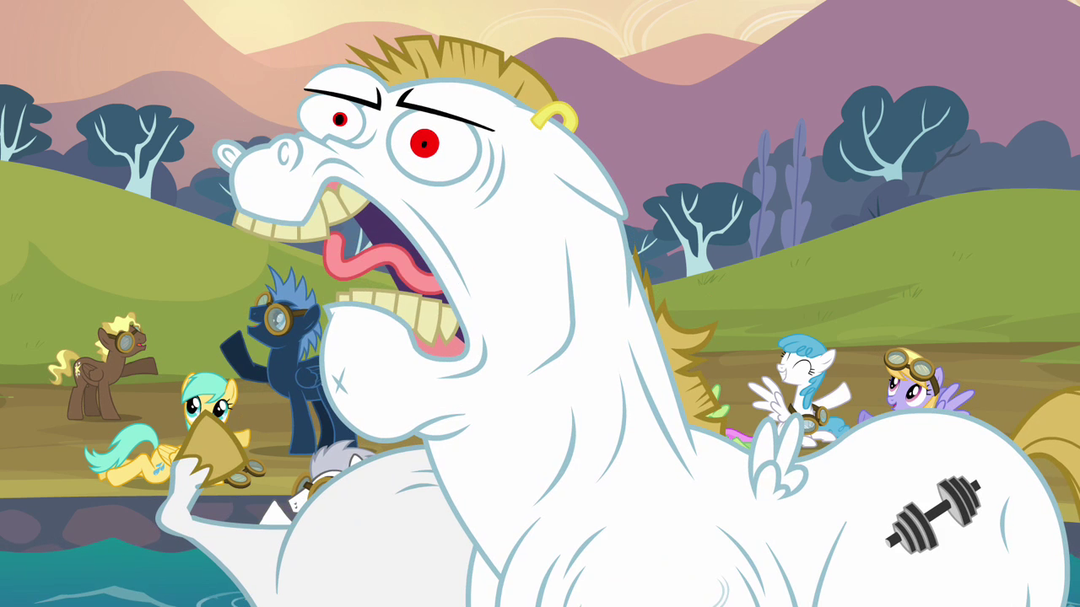 Someone with a measly D6 in Body could still pull off feats worthy of this guy.

Each character also has a certain number of Friendship tokens that can be spent to reroll dice or improve rolls, at the GM’s discretion. Friendship is Magic, after all!

However, there is one thing that you can’t do in Tails of Equestria: You can’t die. You may have noticed that, instead of HP, your character has stamina. Stamina is your character’s health in the very broadest sense - not just whether you’re injured or not, but how you’re holding up in general. You can lose stamina from overexerting yourself, getting hurt or sick, and even from emotional stress. If your stamina hits zero, you fall unconscious and are out of the action until you have a chance to rest and recover. However, in keeping with the children’s show that Tails is based on, there are no canon rules about character death. 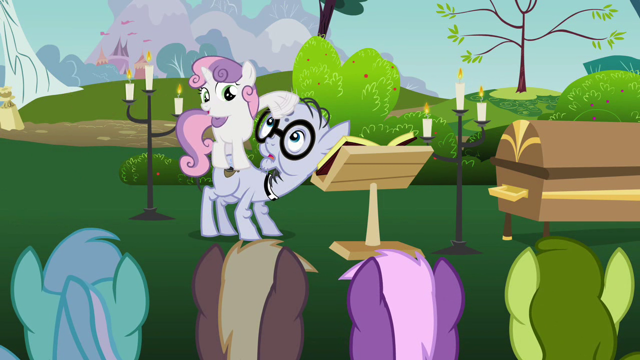 Your GM, of course, may have other ideas.

Why Do We Need This Game?

Tails of Equestria is a great entry-level TTRPG. For fans of My Little Pony: Friendship is Magic, the familiar setting provides an exciting and welcoming world to play in. The simple rules and absence of character death create a comfortable and relatively low-stakes experience that is perfect for introducing a child or a new player to the genre.

The session that I played at Bronycon was a perfect example. We were trying to make sure that the Equestria Games - basically the MLP version of the Olympics - would be held in our town next year. To do that, we had to impress and win over the judge who would be making that decision, an infamously finicky and impatient pony named Ms. Harshwhinny (yes, really, Ponies’ names are often…descriptive).

To impress her, we arranged a parade, a feast, and a show to put all the best parts of our town on display. There was never any physical danger, and there was no need for it. Things were plenty tense enough as we wondered how best to impress her and tried desperately to avoid saying the wrong thing.

Of course, if you’d prefer, you could relive the episodes where Lord Tirek escaped from Hell and consumed the life force of every pony in Equestria to empower himself. You know, kids’ show stuff.

The point is, Tails is a simple and adaptable system that is ideal for an inexperienced gamer, but still enjoyable for tabletop veterans. 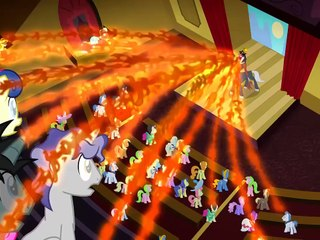 No, really, a demon centaur once escaped from Hell and ate everypony’s life force. That would be a totally canon premise for a campaign.

What If I’m Not A Brony?

You don’t have to be a hardcore fan of My Little Pony to play Tails of Equestria. The core rulebook includes a lot of information about the world, as well as stat blocks for all of the major characters and many of the minor ones, in case you want to use them in your campaign or let your players play as them. Therefore, even people who aren’t intimately familiar with the show can participate and enjoy themselves.

Unfortunately, while I’ve said repeatedly that Tails of Equestria is simple yet solid enough to be played and enjoyed by anyone, I’m under no illusions that it will be popular outside of its target audience. This game was designed specifically for players to go on adventures in the world of Friendship is Magic, so people who aren’t fans of it will probably gravitate toward other mechanically lightweight RPGs like Overlight or BESM instead. 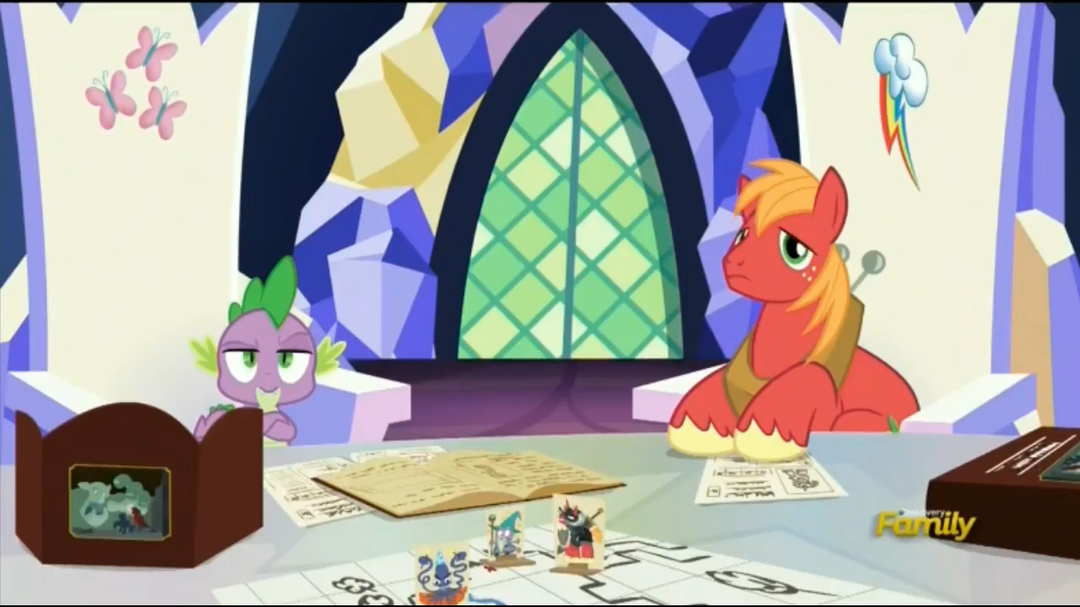 It’s a fine game, but you may decide that Tails of Equestria isn’t worth your time, which of course is also fine.

My final word on Tails of Equestria is this: I encourage anyone and everyone to give it a try, if given the chance. I certainly wouldn’t expect you to buy the book yourself unless you are a brony or looking to run a game for some MLP fans, but hey if it looks interesting why not give it a shot?