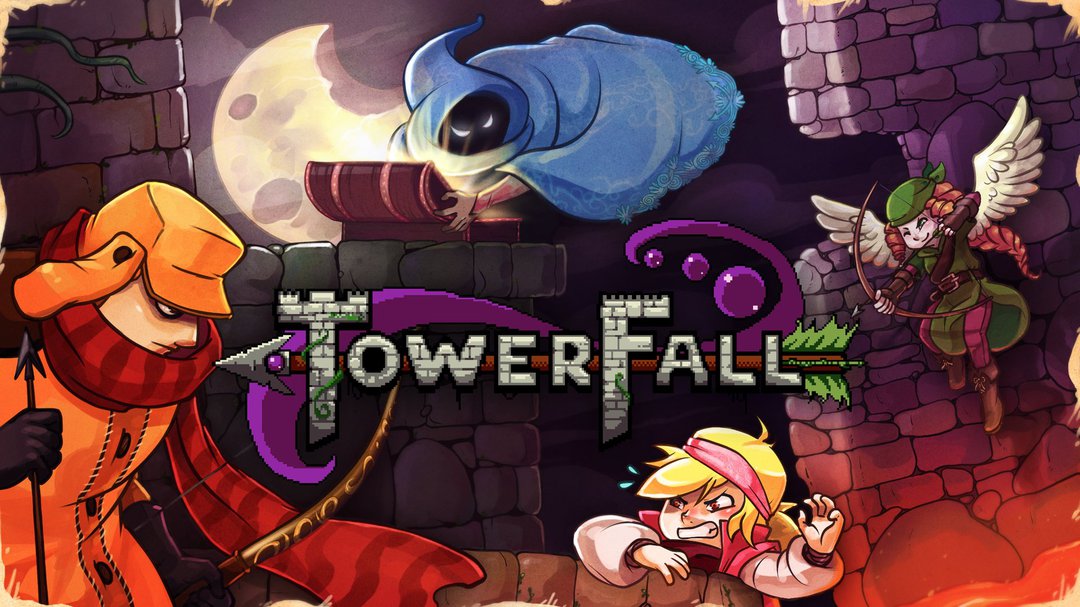 While I'm still learning the ins and outs of the Ouya hardware, I can say that a huge chunk of my time so far has been dedicated to Towerfall. Thanks to the open nature of the Ouya console, I was able to toss it in a bag, bring it to a friend's house, and plug in a 360 controller and two PS3 controllers for some 4-player gameplay. It's the first local multiplayer game I've played in a long time, which is the only way it can and should be played. Many have called this the Ouya's killer app and, well, they're right.

Towerfall can be described as Smash Bros. with arrows and a smidge of Joust. Matches are at most a minute, especially with kills being one hit and and lives limited to one per round. The game supports 2-4 players, and while there are unfortunately no bots, one on one matches are still very enjoyable. Each player starts with only a few arrows, and must pick them off of walls and corpses to keep from running out. Even without arrows, though, players are only at a slight disadvantage. Kills can be made by hopping on other players' heads, Mario style, and arrows can be snatched from midair if dodges are timed right. 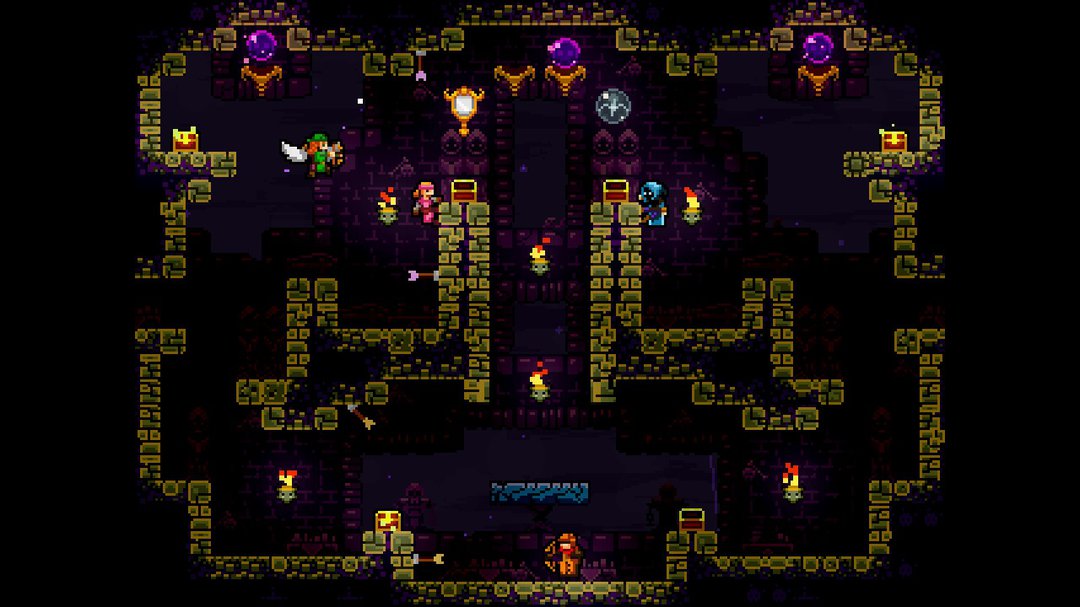 Competitive Smash Bros. fans will be happy to know that even with random items turned on, they don't feel like they unfairly tip the game in any player's favor. Chests are often dispersed through the map so every player has something for themselves, but even then using items takes skill. Laser arrows can ricochet and wreak havok for others on the map, but can also backfire and kill the person who fired them. Bomb arrows can kill anyone within a certain blast radius, also including the person it came from. Using invisibility or darkness to hide on screen can actually be effective for surprise kills, but only if you don't already have a shield or another player keeping track of you. While the item pool is small, it definitely makes the experience more varied, and definitely more entertaining.

Even better is the customization the game allows. You could disable specific items, increase the spawn rate of chests, or just turn all items off completely. There are also gameplay modifications to be made, my favorite being exploding corpses, which often result in faster matches and lots of accidental deaths. 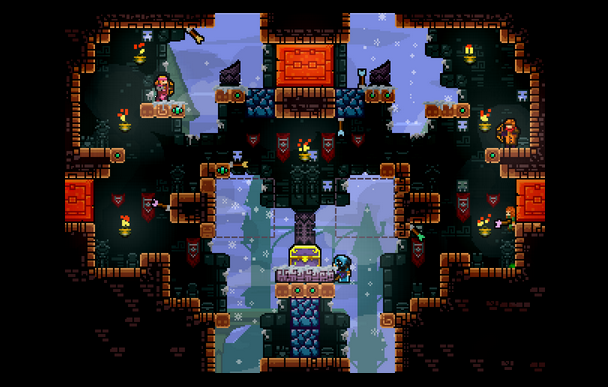 Maps also bring variation, and constantly change throughout a match. When selecting a level, you are selecting one of a few environments, not stages. Once an environment is chosen, every round takes place in one of a number of stages in that environment. For example, one stage set features orbs that can be shot or jumped on to make fall on other players. Another has an abundance of breakable blocks, and bomb arrows will be more likely to spawn there.

Every stage fits onto a single screen, so there are never camera issues. In fact, going off the edge of the screen will warp you to the opposite side of the screen like in Pac-Man, allowing for some awesome trick shots and surprise attacks. One stage in particular has no obstacles between the top and bottom of the stage, allowing arrows and players to fall infinitely in the center of the screen. The constant change up of stages and the ability to warp really take a lot of player advantages away. Someone who starts on the top of the stage would normally have an advantage to those spawning at the bottom, but not if that lower player can hop through the floor and land on the other's head. 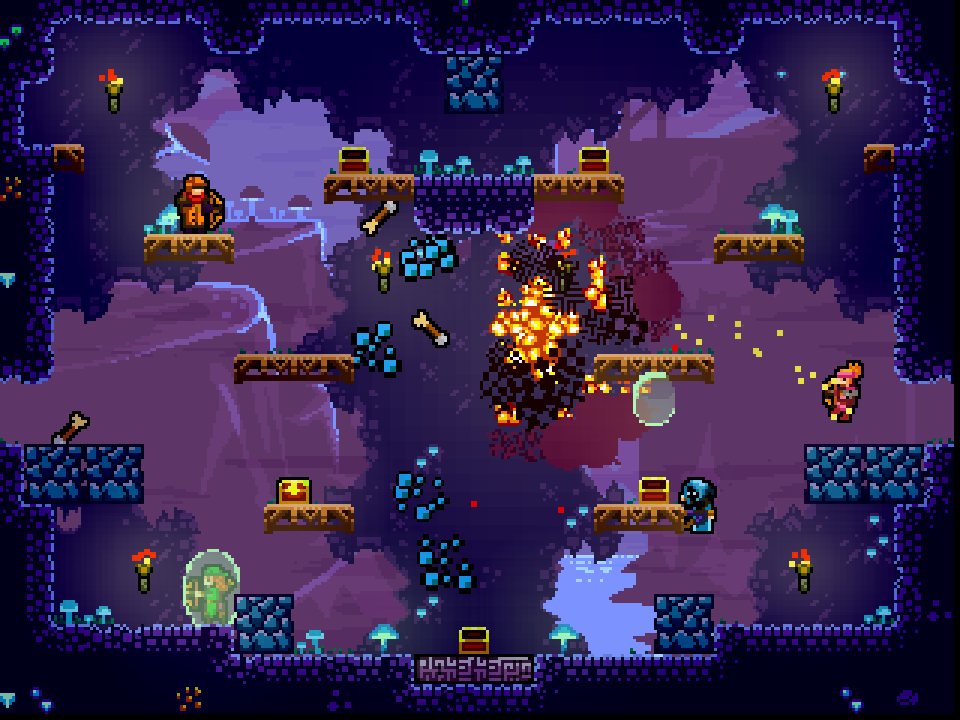 Of all things, this game brings back the vibe I got from Super Meat Boy, with even less frustration. Deaths never feel unjustified. The player is never limited by the controls, only by their skills. If a player dies, it's either from their own mistakes or the smarts of an opposing player. Even then, rounds go so quickly it's hard to dwell on any single death for long. There's even an instant replay after every match, and while it won't show hundreds of iterations of a character attempting a level, it will often catch those tense final moments in a round for everyone to slow down and watch. Many matches will be close, and the ability to watch them again is great for fine tuning skills, which can then be carried over to the single player challenges.

Single player is definitely lacking on its own, but is fun and worthwhile for practicing between multiplayer sessions. Each environment is split into three challenge stages, every one being more difficult than the last. The player is tasked with killing a certain number of dummies in a certain amount of time, and that time is very small. It's an excellent trainer for an already easy to grasp game, and I expect to spend a lot of time fine tuning my skills and learning more of the nuances of the engine by trying to beat the top times on these levels. I've only played the game for two days and some of those times look impossible. If they are obtainable, that means there's a hell of a lot to this game I haven't figured out yet, and I can't wait to learn.

Towerfall is the most fun I've had in a room with three other people in a long, long time. Even if the single player is lacking, $15 isn't a bad price for the amount of time you'll be spending with friends, constantly restarting matches for just one more go. Find a couple friends, split the cost of an Ouya, hook up some PS3/360/USB controllers, and go to town. Or, wait for the PC version. I'm already itching for the next chance I'll get to bring this to a friend's house, and I'm usually the patient type.