Take Up Arms For The Second American Revolution 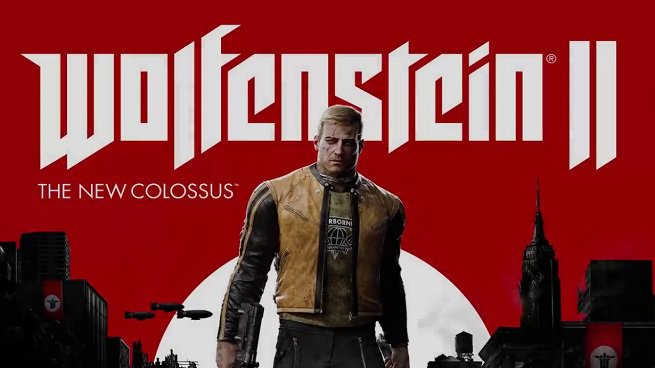 At its very base, its core, Wolfenstein II: The New Colossus is about one thing and one thing only, and that’s killing Nazis. Through a wild story tearing through an alternate timeline in which the Nazis won the second world war, Wolfenstein II continuously gives its players more ways to get to that base, be it through bullets, lasers, fires, explosions. Heck, I don’t think it even matters how. Wolfenstein II simply bathes in its own violence, and delivers an experience that nobody should miss. And yet, even though what might first appear as an onslaught of mindless violence, there’s so much more waiting to ambush you.

Wolfenstein II starts immediately after our stalwart Nazi-slaying protagonist B.J Blazkowicz’s battle against General Deathshead Strasse from the first game. After showing his rescue by the Kreisau circle, the Nazi fighting resistance group, the story begins to turn inward, flashing back to the memories of a young Blazkowicz. These memories gave me a look into a kind of psychological profile of the man who would later be known as “Terror Billy” to the Nazis. From his experiences as a child with a hateful and abusive father that exemplifies the hate that now rules his world, I began to empathize with B.J. Just as quickly as I began to understand B.J’s character, I was thrown back into his place, wheelchair bound and blasting Nazis on a massive underwater U-boat. 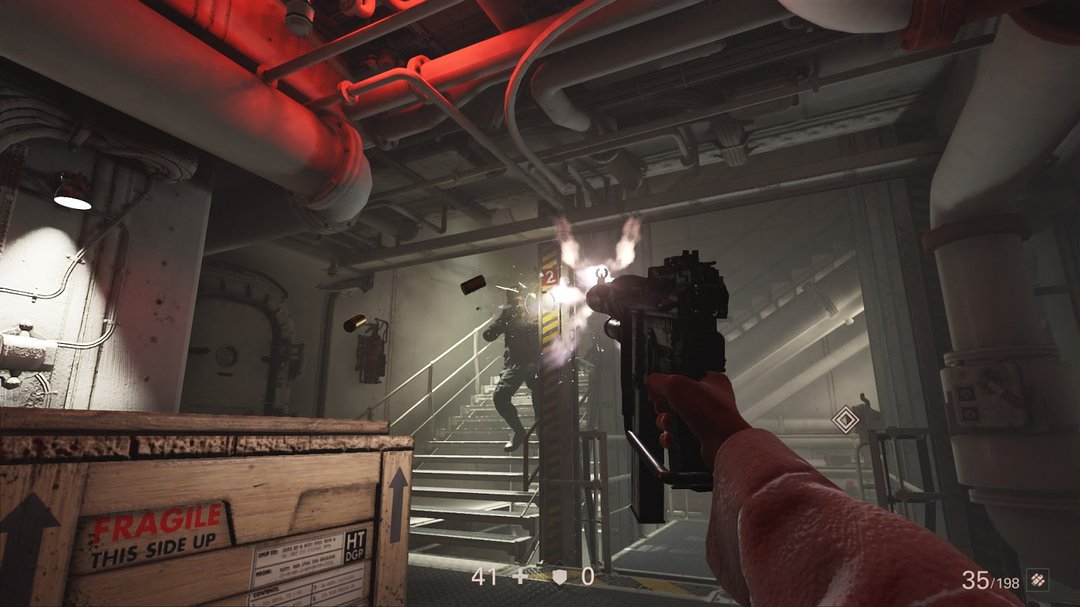 Nothing can keep B.J. from doing what he does best.

After confronting the games’ over-the-top antagonist, General Engle, who holds a vendetta against B.J for killing her lover and disfiguring her in the previous game, Wolfenstein II’s hub world opened up for exploration. The massive U-boat is home to the Kreisau circle, a group of characters all with their own quirks and interactions that grant the submerged space life. As you explore the U-boat these characters have small interactions with one another that paint picture of the hardships endured by not only the main cast of characters but other people affected by the Nazis’ conquest.

The game benefits massively from this kind of storytelling, one often left untapped by the FPS genre. B.J. Blaskowicz is obviously still a Nazi-stomping badass, but he, along with the other characters, is fully fleshed out, his flaws pointing straight out. These aren’t perfect people. Their intentions are shown and can be fully understood beyond “Nazis are bad, kill them.” In a game about fighting, human characters give so much more importance to what I am fighting for. 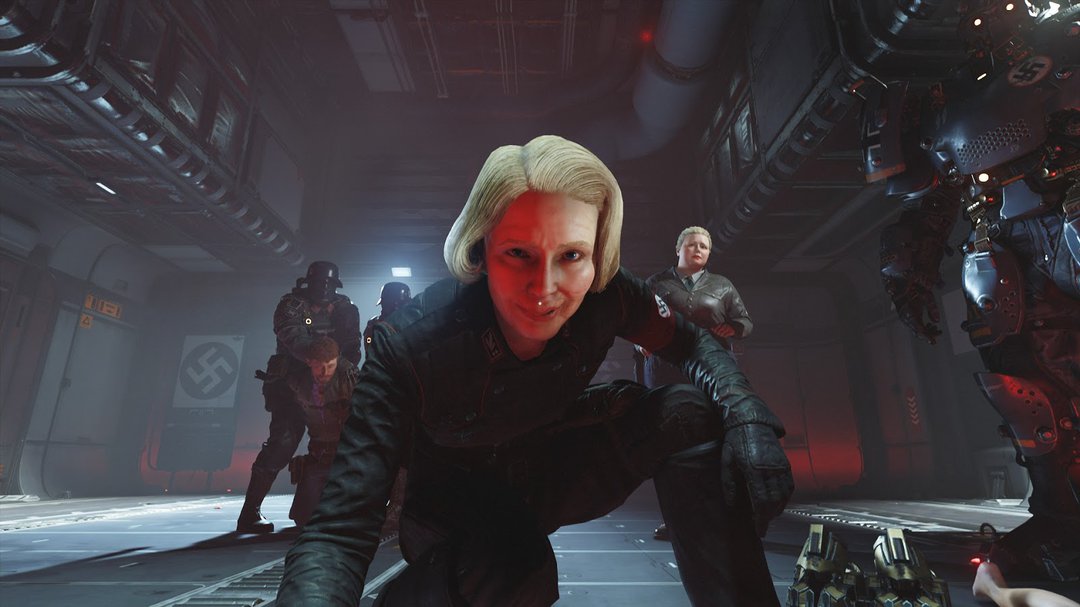 Wolfenstein II does everything in excess, including its villains.

It’s necessary to give a kudos to Machine Games for their choice to keep the gameplay and story as the focus of their game, not adding a multiplayer or tainting their game with lootboxes in some way. Wolfenstein II’s story is an absolute marvel of the power of storytelling through games, and to dilute it with any detractions or forced in DLC would have been a shame.

Fight Across America And Beyond

While the gripping story of Wolfenstein II brings me into its world, the various locations visited throughout leave me tired halfway through the game. While some set pieces are unique, like Nazi-controlled Roswell or a massive Nazi base on Venus, a majority of the areas in the game feel repetitive. Layouts of levels jump from one similarly shaped arena to another, and shooting down corridors of Nazis in between can only entertain for so long. But when the game flexes its muscles and really shows off what the ID Tech 6 engine can do, it does so brilliantly. Where color is present, it pops out and practically seeps from the screen. 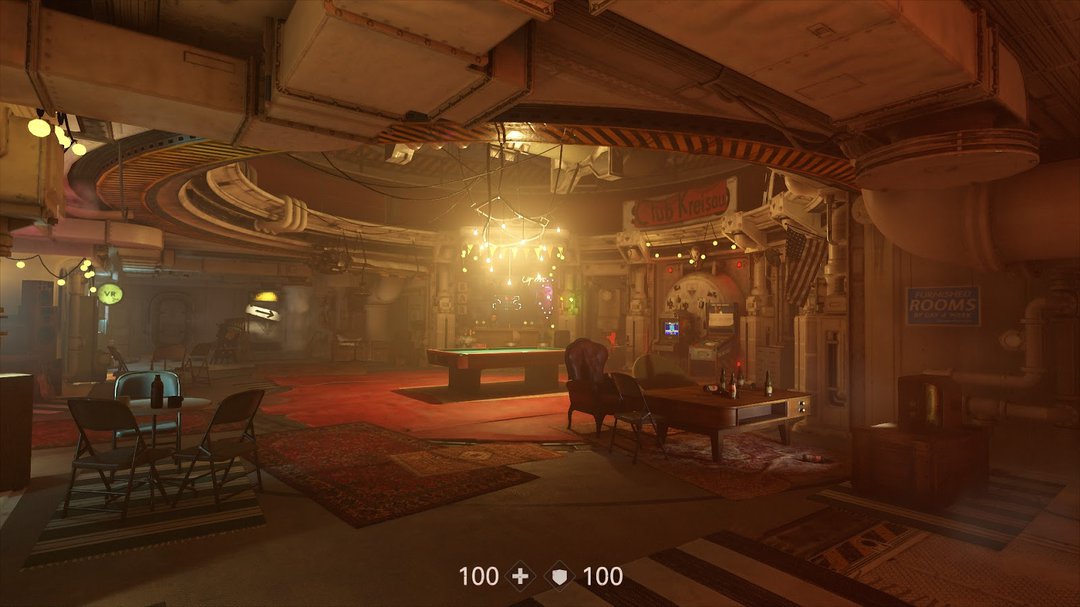 One of my favorite spots in Wolfenstein II is the Club Kreisau, where you wait between missions.

Firefights are when Wolfenstein II truly comes to life. Bullets turn into flying streaks of orange that ping off the armor of enemies, lasers have a low red glow to them, and fires roar with a life of their own. Shooting enemies is its own visual reward, whether it’s watching an enemy’s armor slowly break away under waves of bullets or the pop of a Nazi Commandant’s head from a silenced pistol. All the while, synth heavy pounding songs orchestrate every powerful shot fired, a testament to Wolfenstein’s “go big or go home” attitude.

Wolfenstein II is a perfect example of what a sequel should be like. It takes the main concepts of the The New Order and builds off them. Its story raises the stakes and its characters are larger than life, excessive caricatures of what they are meant to represent. 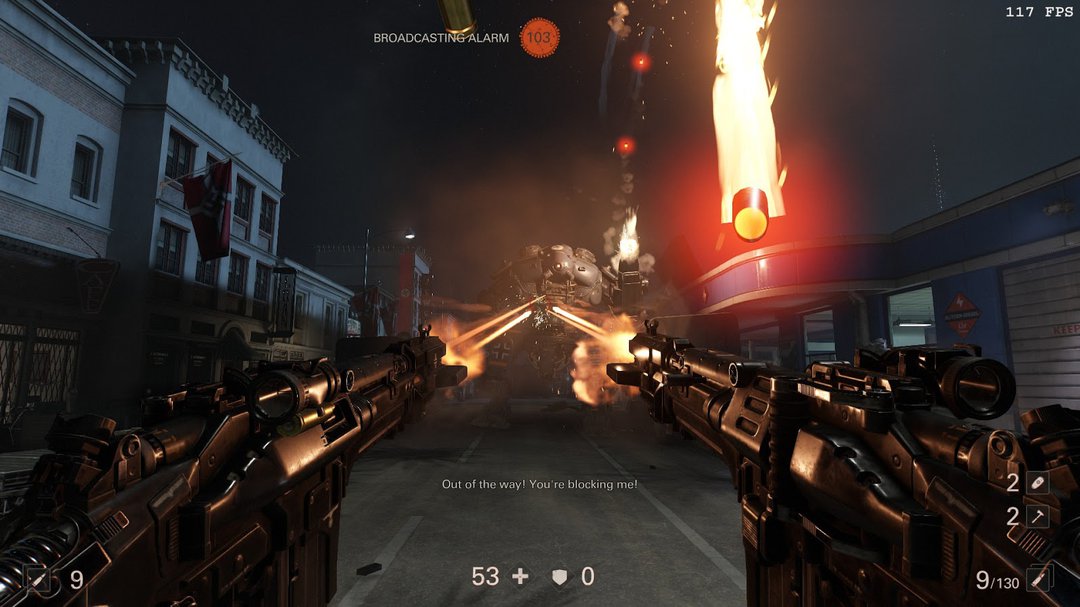 You'll need every gun you have for the robotic army the Nazis have.

Existing mechanics have been improved, as well. Dual wielding weapons is no longer limited to two of the same gun. Shooting simply feels powerful, from the Sturmgewehr assault rifle to larger weapons that fire lasers that disintegrate enemies in seconds. No matter the size of the weapon, gunplay is always smooth and fluid. Whether I am throwing a hatchet at a Nazi or blasting down corridors with two enormous rotary shotguns, Wolfenstein succeeds in making mowing Nazis down fun.

Similarly to the last title in the series, Wolfenstein II offers two ways to confront enemies, either stealthily or in an all out assault. While the game leans more heavily to combat this time around, the stealthy approach is as fun as ever if not more difficult. Some of the larger enemies in the game can’t be killed by stealthy means, and as opposed to the last game, you can easily be spotted. 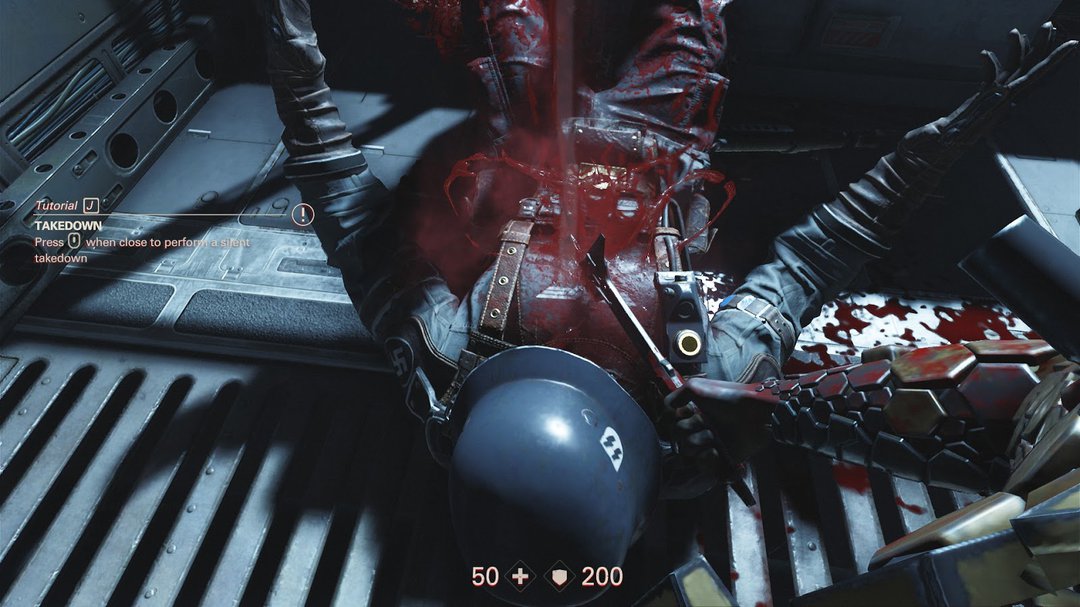 Stealth kills are just as gruesome as you would imagine.

No matter what approach you take, Wolfenstein rewards you with perks based on your playstyle. Kill enough enemies with stealth assassinations and B.J’s crouch walk is faster, kill enough Nazis via an express hatchet delivery and you’ll be able to hold more than two. Watching perk meters slowly fill up after each dual wield kill or hatchet thrown gives me an immediate sense of progress as I play.

After going through Wolfenstein II ended up being about a ten hour story, but there was still plenty to be done to keep the second American revolution going. Using the Enigma machine, you can find the locations of different Ubercommanders and proceed to hunt them down. Revisiting parts of levels for these assassinations feels slightly repetitive, but it lets me explore other options in the levels. It’s also possible to grab missed collectibles visiting these districts, but I feel perhaps that this is only for the completionists. 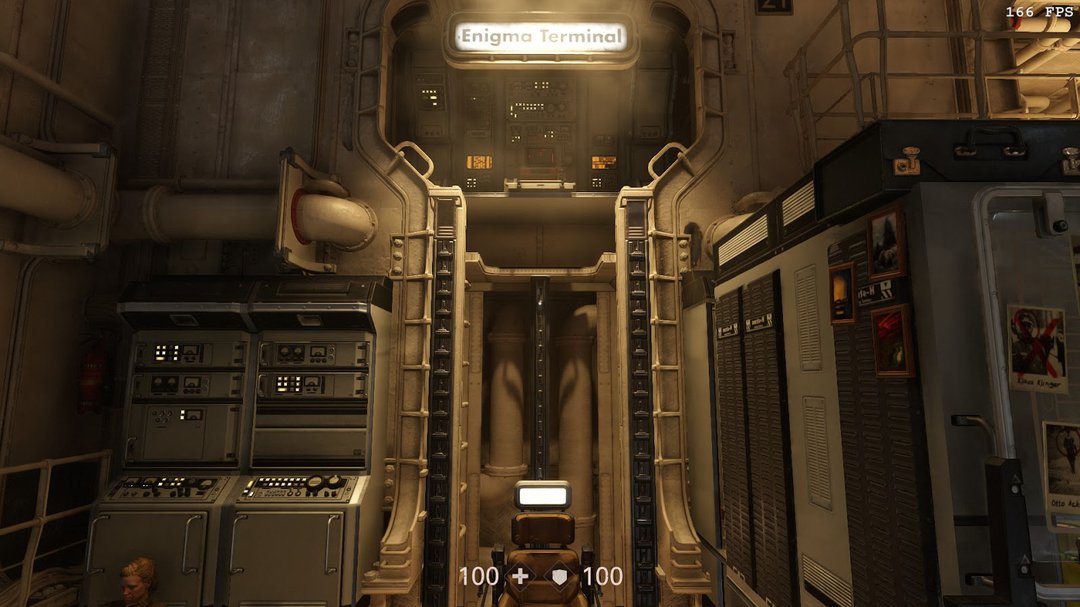 The puzzles of the enigma terminal unlock hours of extra gameplay.

Wolfenstein II strives to do something uncommon in its genre and succeeds tenfold. Its story is powerful, delivered through beautifully written characters and gallons of blood. While its postgame content feels lacking, and some of the locations are repetitive, the time I spend ripping and tearing through Nazis is so enjoyable that I take every minute that I can get with gratitude and enthusiasm. If you’re looking for a perfectly executed first person shooter with a story to match, Wolfenstein II: The New Colossus is definitely what you’re looking for. Good luck on your mission, soldier!