A Dive Back Into Funky Game Design 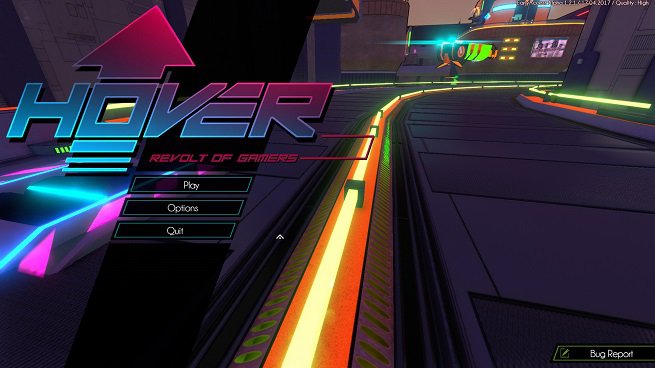 Hover: Revolt of Gamers is an attempt to re-capture lightning in a bottle. There’s no other way of putting it when you see the screenshots of it, when you see what its inspirations were. Jet Set Radio Future was a 2002 cult classic on the Xbox that was made famous by its avant garde world and style. In a gaming world where gritty FPS shooters and violent revenge quests were the normal plot, Jet Set’s goal to rebel through music and graffiti was refreshing and bizarre. Now, after being a 2014 kickstarter success, Hover is coming out this May 31st, ready to re-introduce us a colorful experience filled with its own unique flavor. 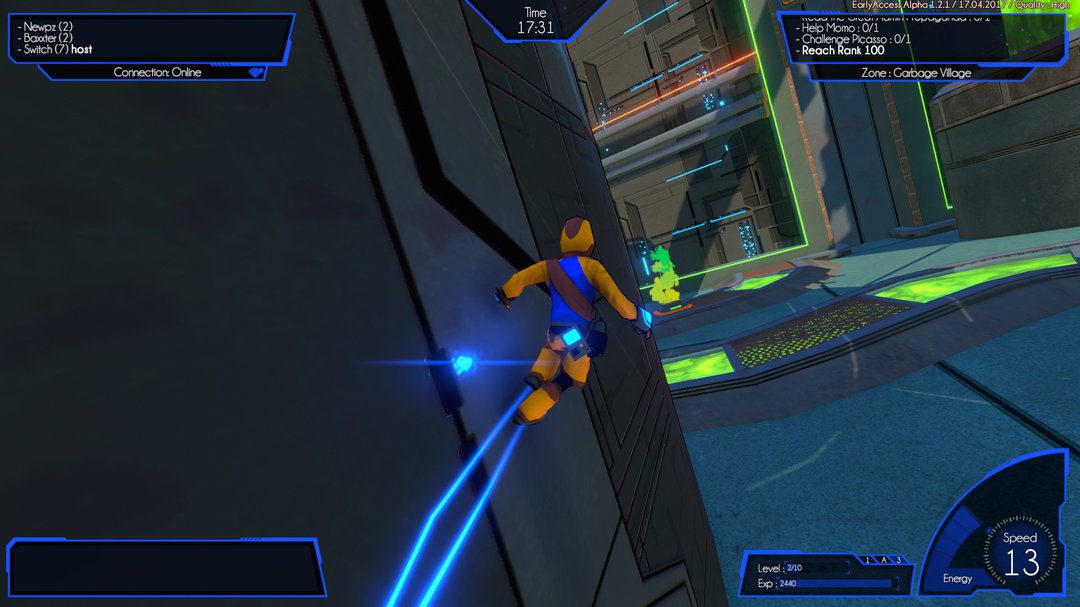 Hover: Revolt of Gamers is set in a dystopian future where fun is outlawed, but you are drafted to become part of a resistance against the Mayor of a massive city that seems to be built vertically. You run, jump, and grind your way through events such as races, attempt to track down security drones to capture, and of course, spray graffiti and break propaganda you find. Its a bizarre world, and because the developers were able to track down the original composer of Jet Set Radio Future, Hideki Naganuma to help with this game, Hover feels like an odd throwback to old game designs and styles, while also trying to push forward and try something new.

There’s a bit more to it than that, but you only begin to start figuring it out once you start playing, and trying out some of the missions you find out in the trash-filled starting zone of the city. A lot of the details in the city aren’t explained, until you realize the green-trash vents can be used as catapults through trial-and-error. Soon enough, you discover just how quick your character can navigate around the city, looking for trouble to get into. Speed, not combat, is the goal in Hover, and the game tries to impress that sense on you through either the glowing neon trails you see in 3rd person view, or the rush of wind around your vision when you shift into first person mode. When I stopped attempting to find a direct path to 'win' this game, and instead began to just enjoy leaping from rooftop to rooftop, it became a blast. 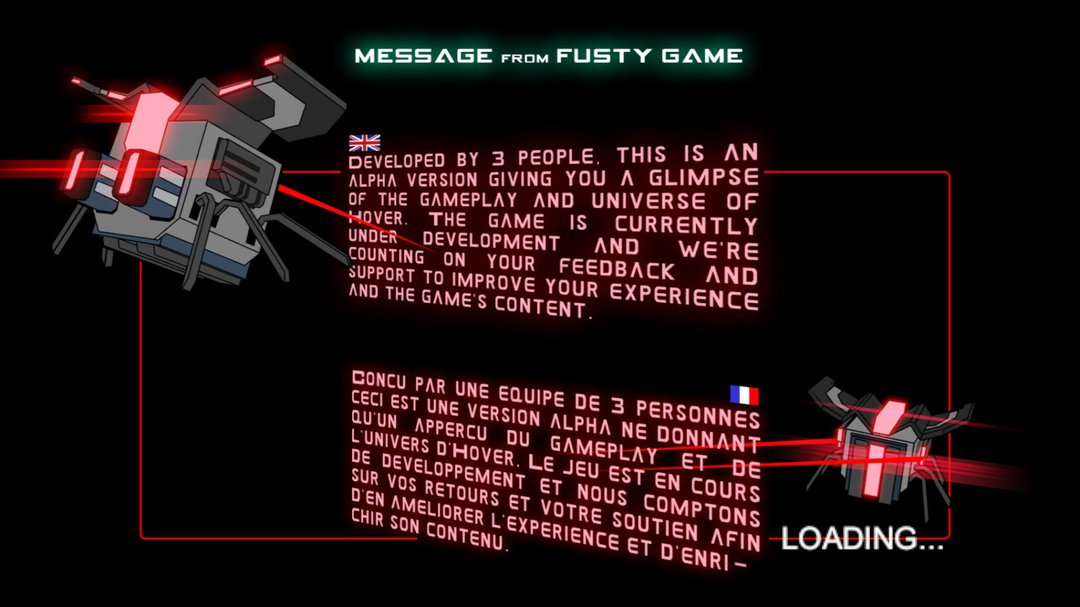 One of the most mindboggling things about Hover was that it was made by essentially a team of three people. This is a fan project at its highest level.

This is, perhaps, the one main detractor of this game; I’ve sunk several hours into playing around with the start of the game, and I will admit that Hover has a rough start; if you give yourself an hour to orient yourself to how your character feels running and leaping about, the game becomes immensely fun. However, the most frustrating part I’ve experienced is that there is no map to guide you, it’s up to you to figure out the best way to navigate the city, and how best to use your scanning button to find the next mission or objective you wish to conquer. I found myself wanting to find the 'main quest' to advance the story, but instead found small mission after small mission. Granted, these small missions can be a ton of fun, but they don't add to a sense of completion. Hover isn't about 'winning', its about relishing grinding down wires and listening to the great music that comes with the game.

Is It Worth Buying?

There’s a lot going for Hover: its attitude and unique style, mixed along with its attempt to blend some of Mirror Edge’s appeal into the Jet Set formula. However, it is hard to say how it will fare as it is released. It is certainly not a game that matches the current zeitgeist of rogue-likes and difficult missions. Instead, it plays, inviting you to wander the city, finding new posters to spray paint, or a new mission to try and speed run. A huge plus for the game is that it cleverly adds seamless multiplayer, where other characters in your server can jump into missions with you, making individual moments spontaneously more exciting. Again, like much of the game, it’s a bit jarring when you first see other characters leaving neon vapor trails across your screen, but soon enough, you can chase them to find fun new missions you might have missed previously through your adventures. 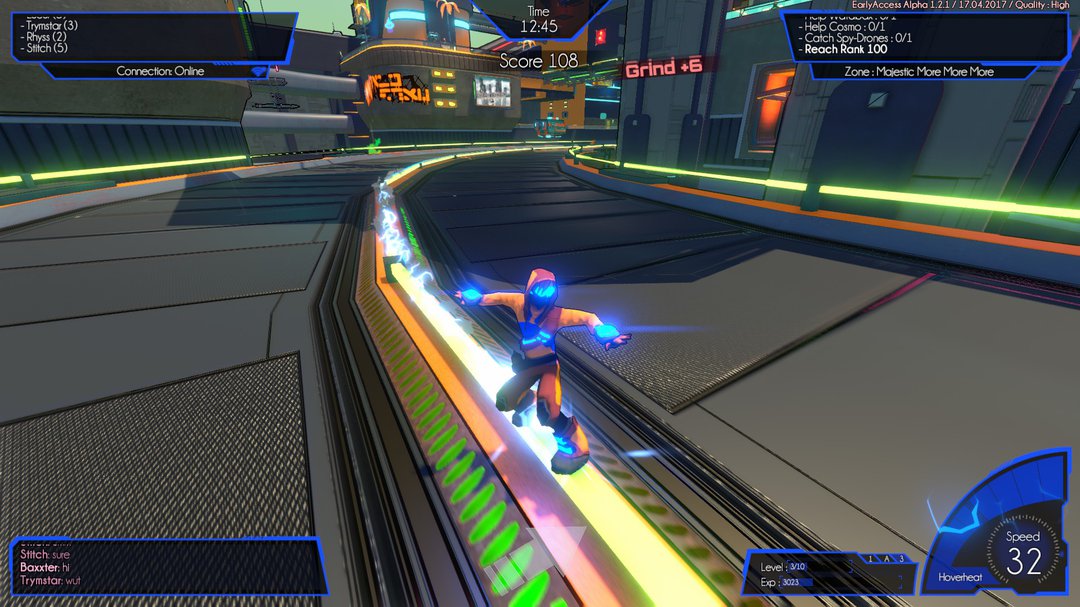 It's about the journey, not the end result...as long as you can go as fast as you can!

However, if you are looking for a linear, streamlined experience, this isn’t it. Hover takes pride in how you can explore and interact on your own pace, to the point where it might be a turn off for people that first turn the game on. I do wish there was more of a tutorial about specific game functions, but I understand what the creative team was going for: a sense of rebelliousness and freedom above anything else. If you ever had fun playing Jet Set Radio Future, this is going to be an instant purchase for you.

It’s a game off the beaten path, and it takes pride in its rough edges, in its zany run down memory lane. I will admit, in my current state of playing 4x games and turn-based RPGs, Hover is not my typical game of choice. However, I've had fun playing an early build of Hover, and for twenty dollars, this is a game worth keeping your eye on. Will this game re-capture lightning? We'll find out this week, as it's released in full.