A Business Practice That Should Alarm You

Valve’s business practices recently have been more than questionable, they’ve been alarming.

Let me take you back to last summer, when this rollercoaster of garbage took off. I found myself distressed - as well as most other Steam users, I hope - to find that Steam had allowed a game called Active Shooter to be put on sale. Mind you, this was smack dab in the middle of an epidemic of American mass shootings that moved the issue of gun control front and center. Lo and behold, here was a game allowing you to take part in one of these events digitally, offering players the opportunity to play as the active shooter. Hell, you could even shoot school students if you wanted to. After repeated calls, including one from us, to take the game down, Valve buckled under pressure.

But they did something else too.

A Slippery Slope To Now

A week after taking down Active Shooter, a post went up on Steam’s official blog stating that “we’ve decided that the right approach is to allow everything onto the Steam Store, except for things that we decide are illegal, or straight up trolling.” This laissez faire approach was an appeal to those that argued in favor of Active Shooter, Steam was going to take its hands off their storefront and turn it into the wild west. Now, the same people the massive online storefront was trying to appease are upset with them again, along with sensible folks, but for a very different reason. 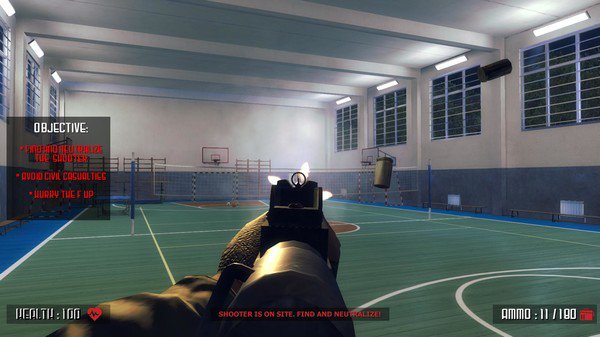 Here's another picture of Active Shooter, because we really don't want to google for pictures of the other game mentioned in this article. That'd look bad.

This time around, the name of the game is Rape Day. Set in a zombie apocalypse, in this game you would be able to verbally harass, rape and then murder women. With an Adult only rating, you could only see it if you had your settings set to display games with that rating. All the same, it would appear next to titles like Crysis, Borderlands and Bioshock. The familiar tired cycle of outrage has run again, with those understanding what morality is calling for the game to not even launch on the storefront and wannabe Active Shooter players complaining again.

This far into this article, you should understand a few things; basic truths, if you will. The first is understanding that for some reason, people actively create games meant only to disgust, disrupt and appeal to a small common denominator. The second is that there are people who will always call Valve out whenever they put something up for sale that has no place in modern gaming. Finally, three: Valve doesn’t care.

Ever since they took their hands off approach there’s been evidence but no reason to think this was the case. Instead, what lead me to this conclusion was the company’s reasoning behind not putting Rape Day up for sale. Here’s a link to Steam’s blog post. In it EJ, the same employee who put up the “Who Gets To Be On The Steam Store” post, explains that Rape Day won’t be available because it “poses unknown costs and risks, and therefore won’t be on Steam.”

This Is Going To Keep Happening

I don’t know about you, but I don’t like this reasoning one bit. This game was morally void, like any game where one of the main selling points is that it gives you the opportunity to rape people. But instead of saying that the game featured something Steam deemed illegal, or was “straight up trolling,” EJ instead cites unknown costs. I think it’s reasonable then to ask what would it cost to get a game like this on Steam? What if the petition to not release the game, which got nearly 8000 signatures, was instead for putting the game out? At what cost would Steam sell itself out and lose any shred of morality for sales? Costs shouldn’t be the deciding factor of a game making it, that decision should rely solely on the game’s content.

These aren’t questions I want to ask, but instead questions I have to ask. Not just as a reporter, but also as a consumer. Steam isn’t alone as a digital games storefront any more. Epic, Blizzard and Origin are all stepping up their game, putting out exclusive content and in some cases stealing games from Steam. What all these platforms can say with 100% certainty is that games like Rape Day and Active Shooter never even had a chance to be released on their platforms. Sure, Steam won’t be going anywhere any time soon, but I almost find it funny to think that the colossus of online gaming won’t be done in just by competition, but also because it had lost all respect and moral standing as a business.