How I learned to stop hating and start loving Bidoof

This has been a rather interesting semester. I'm gaining more responsibilities, planning my life after graduation, suffocating under an avalanche of homework, and participating in stupid prank wars involving goofy looking Pokemon. Somehow, in the course of a month or so, "Bidoofing" became a widely used term amongst my group of friends. Then suddenly a good chunk of the people I knew. Now I'm kind of known as the Bidoof guy, and everyone loves the stupid little thing. Partially for the sake of telling the story, and partially to explain the context of this strange in-joke, this post is a tale of how that all started...

I was late to the Pokemon craze in my grade school years. I didn't play Emerald until a friend passed it down to me years after its release, and despite my excitement, ended up a year late to Diamond when it finally came out. Even so, I was excited to finally jump into a generation where I didn't know what Pokemon it contained - I'd be able to experience the game like all my friends did back in the first generation, discovering the designs as I went. So, I sat down, booted up the game, picked my starter, and went off into my adventure. I took that first step into the tall grass, and what exciting design did I see? Bidoof.

I hated this thing at first. Like many other fans at the time, I thought all of the new designs were stupid. I still played through the game, but wasn't as enamored with it as I had been in the past. Yet, somehow, years later, this stupid thing grew on me.

Last semester, I printed out about a big 'ol Bidoof on a sheet of paper, just for fun. My roommate had the top bunk at the time, and I had the great idea to stick it to the ceiling above his bed, in the hopes he'd see it right before closing his eyes to sleep. He did, and ended up in a laughing fit before going to bed that night. That was the end of it, until a week later I thought it would be a good idea to hide the Bidoof in one of the books he was reading. The next day, Bidoof found its way into my tool drawer. Then stuck to my roommate's laptop screen. This went on for pretty much the whole semester, until it became routine to check your surroundings for Bidoof once entering the room. 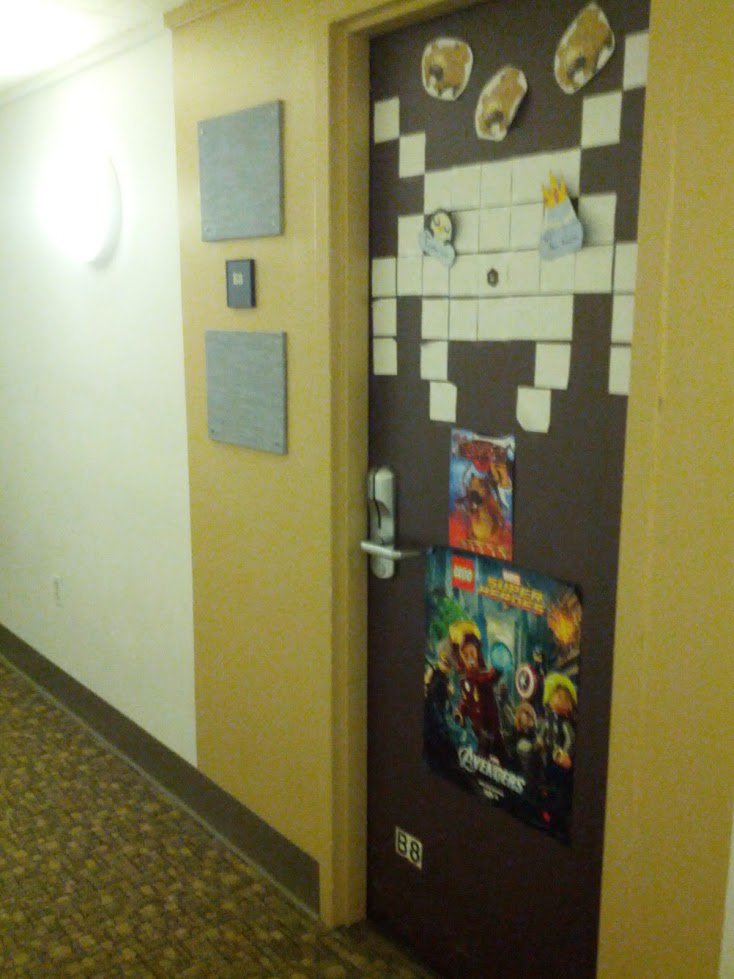 This is what our door looked like by the end of the semester.

The semester eventually came to a close, summer passed, and my roommate and I moved into an on-campus suite with a couple friends this past August. We all forgot about Bidoof, and frankly, I hadn't played a Pokemon game since HeartGold and SoulSilver released in high school. For the most part, I even remained rather ignorant of the news of X and Y in the months approaching its release. However, I was feeling rather devious at work one day, and decided to take advantage of my printer access:

This is already getting out of hand. Still not enough. pic.twitter.com/1UFUCBj1W1— Jon Glover (@juan0tron) September 5, 2013

I think the first batch ended up being around 160 or so. Then nearly 300. I came back from my shift eager to put them EVERYWHERE. Open a book? Bidoof. Move your mouse? Bidoof. Lift your keyboard? Bidoof. Look into an empty lightbulb fixture?

You can't be mad when finding one of these things, either. Those dead, beady eyes and those goofy ass teeth just forces a smile on the face of whoever discovers them. It almost immediately became a rule that if you found a Bidoof, you hid it somewhere else for another person to find. Eventually, the Bidoofs breached their way out of the room and found their way around campus. Then, eventually, town. A few friends even started changing each other's profile photos on Facebook to Bidoofs. It got to a point where I kept 30 or so spares in my pocket and would just slip them everywhere I felt was a good place. Into friend's backpacks when they aren't looking. On bulletin boards. On the top of Pringles cans when helping with the groceries. Everywhere. At some point, I started to question my sanity:

What the actual hell is wrong with me pic.twitter.com/mCdHUfFlUt— Jon Glover (@juan0tron) October 17, 2013

On a small scale, Bidoof became my campus' version of Andre the Giant. People unaware of some of the lesser known Pokemon began asking around about it. Friends started getting asked if they were responsible for all the Bidoofs. Eventually people found out I started it, and I became the Bidoof guy. After this point, I had stopped "Bidoofing". Yet, I wasn't able to escape the thing. @bidoof_bot was replying to my Tweets. I was continuing to find Bidoofs everywhere. There was even one on my Gamestop card the day I bought Pokemon X. Friends even started naming their Bidoofs after me in Pokemon X. Somehow this joke hadn't died yet, so I figured what the hell, I'll run with it.

First Bidoof I saw in X, I caught. I named it Doof, and I'm determined to train it until it's level 100. Currently, it's level 72, has max EV's, and even knows Ice Beam. I took that thing every step of the way from the beginning of the game to the Elite Four. Oh, and it's never allowed to evolve. Somehow, this was the most rewarding playthrough of a Pokemon game I've had. The pseudo challenge of taking a rather useless Pokemon and training it to be the best useless Pokemon has been a lot of fun. It's no nuzlocke, it made the experience much more interesting.

So, it's months after I've started this thing, and I'm still talking about it. What's the point of this story? Is it how I grew to love one of the stupidest Pokemon designs ever? Or how a prank war can grow way out of hand? Or how the abundance of a single image can give it artificial importance? Maybe. At this point, I'm just amused at how many man hours have been wasted on this goofy ass beaver-thing. Someone even gave me one as a gift today. I made it battle my alien queen for the rights to join the other toys on my desk. I think it has earned its spot. 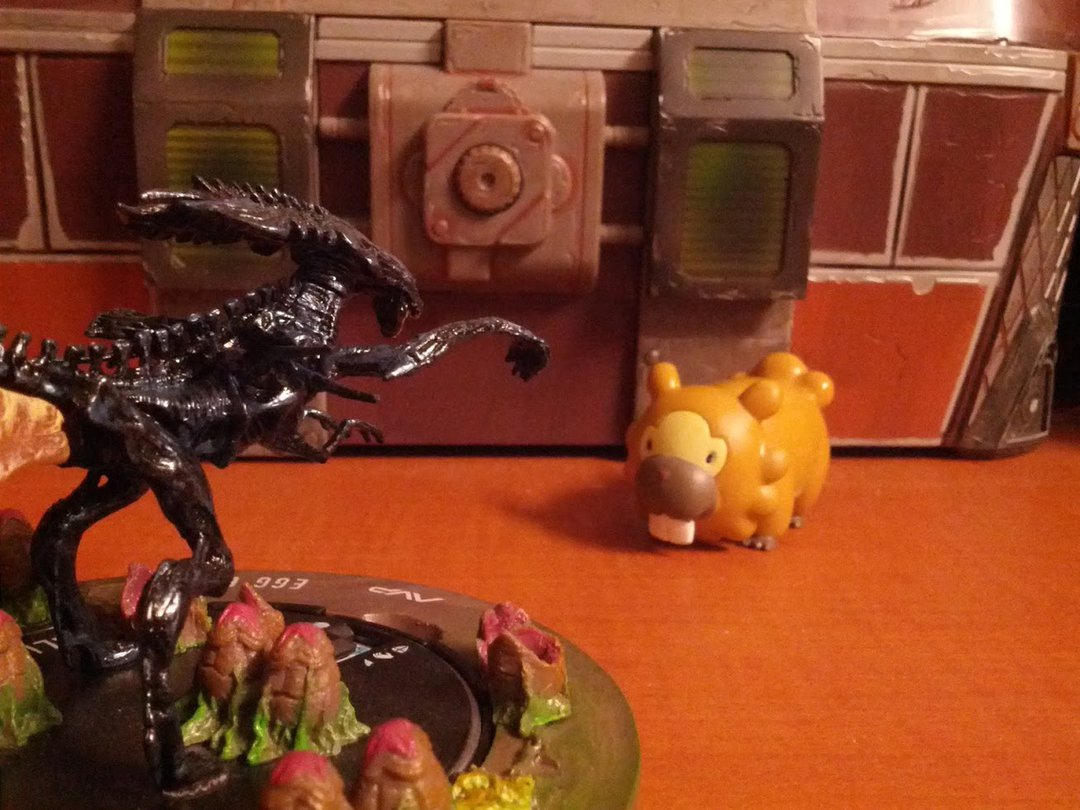