Lightning-Fast Action More Than Makes Up For Bloated Dialogue 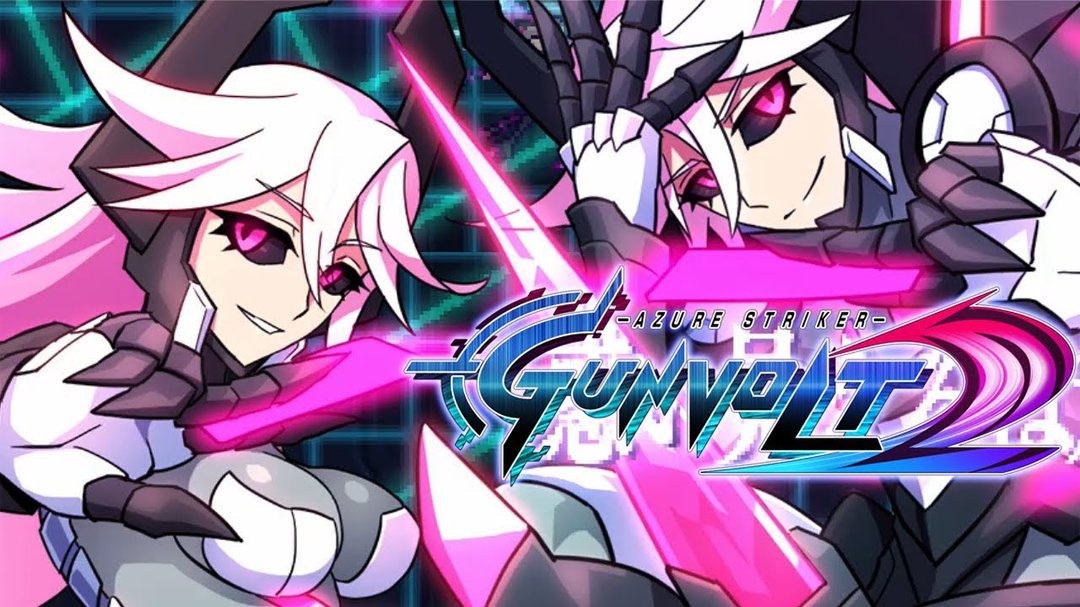 When the main character is named Gunvolt, you should know what you’re in for.

But, while the gameplay is quick, smooth, and exciting, it’s not what makes ASG2 stand out. This game is 100% about style. From the art style, to the in-game challenges, to the combo-based Kudos system, AGS2 makes it clear that it’s not enough to just win - you need to look good doing it.

And yes, every special move comes with its own haiku.

First, Some Much Needed Backstory

Gunvolt is an Adept who uses the Septima called Azure Striker - and if you don’t have a clue what I just said, then you already know why you should play ASG first. ASG2 assumes that you’ve already got a handle on the world and the plot, so it doesn’t feel any need to explain who characters are or why they have the powers they do.

Basically, Adepts are like Mutants in X-Men. They’re people who were born with incredible powers called Septima. Gunvolt’s Septima, Azure Striker, lets him control electricity to attack or generate electrical fields. In ASG2 he’s fighting against a group of evil Adepts who want to establish their own paradise and wipe out regular humans, whom they see as inferior. 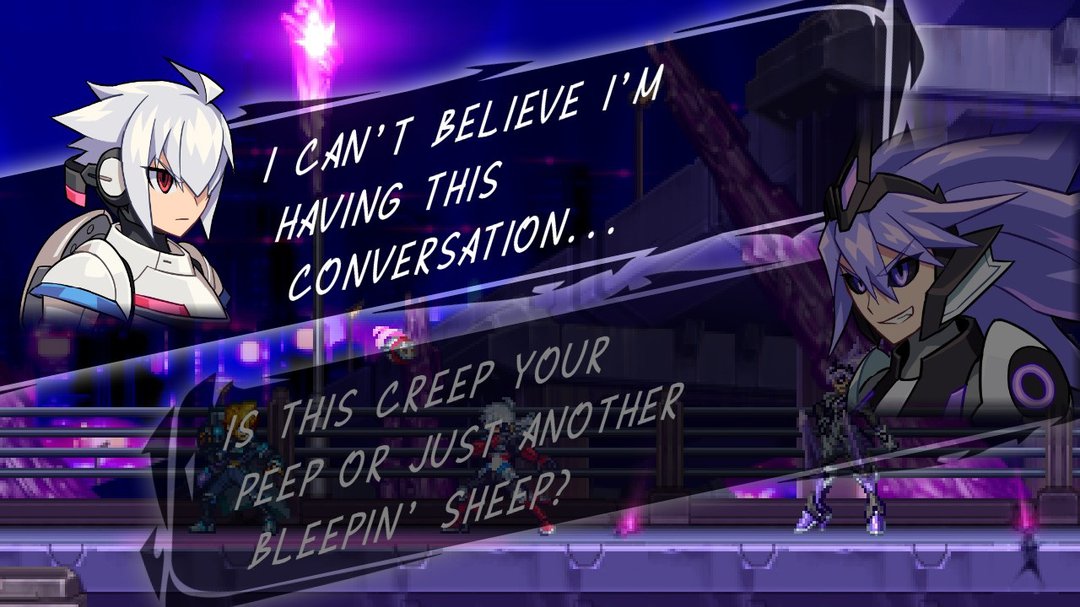 Both the game and its characters are, uh... colorful.

There are two different story paths in AGS2, which come together during the finale. You play as Gunvolt, the hero who wants to bring peace between Adepts and Humans, and Copen, an antihero Human scientist who uses technology that mimics Septima. Copen wants to use his inventions to wipe out all Adepts - though, somehow, he never seems to get around to killing Gunvolt.

To really understand what’s going on, who Gunvolt and Copen are, and why you should care, your best bet is to play the first game. If you really want to dive right into the sequel, though, you can get up to speed with the ASG wiki.

Easy To Beat, Near-Impossible To Perfect

Not to beat around the bush, ASG2 is easy. Anyone who’s reasonably good at action-platformers could finish their first playthrough in around 6-8 hours, and without too much trouble. You can collect items and craft new equipment to make your run even easier, but honestly, you probably won’t need to.

On the other hand, with just one simple change, ASG2 becomes controller-breakingly hard. 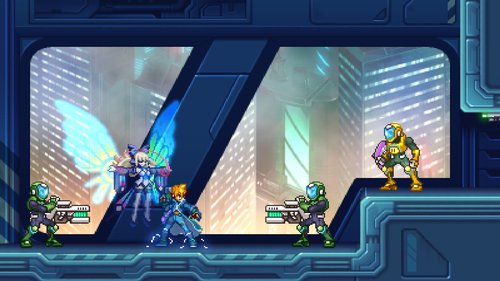 The difference is one of your signature skills, Prevasion. Gunvolt and Copen both have the ability to automatically dodge almost any incoming damage, as long as they have energy left. Since energy recharges in about one second, and even faster if you do it manually, you’re all but invincible as long as you play with the slightest amount of caution.

But if you unequip the item that grants Prevasion, or play on speedrun mode - which disables it, as well as giving you other handicaps - prepare for absolute hell. The game was designed with Prevasion in mind, and while it’s possible to get through without it, you’ll need nearly pixel-perfect dodges to get past some of the bosses.

Any anime fan could tell you that there’s nothing shonen characters enjoy as much as a mid-combat conversation. Dragon Ball Z, for example, is remembered for Frieza’s infamous “five minutes” that lasted ten episodes, with over 300 lines of dialogue throughout.

ASG2 characters are just as chatty as their TV counterparts. People are constantly talking during missions, to the point that I literally could not find long enough breaks in the dialogue to take screenshots without text boxes at the bottom. 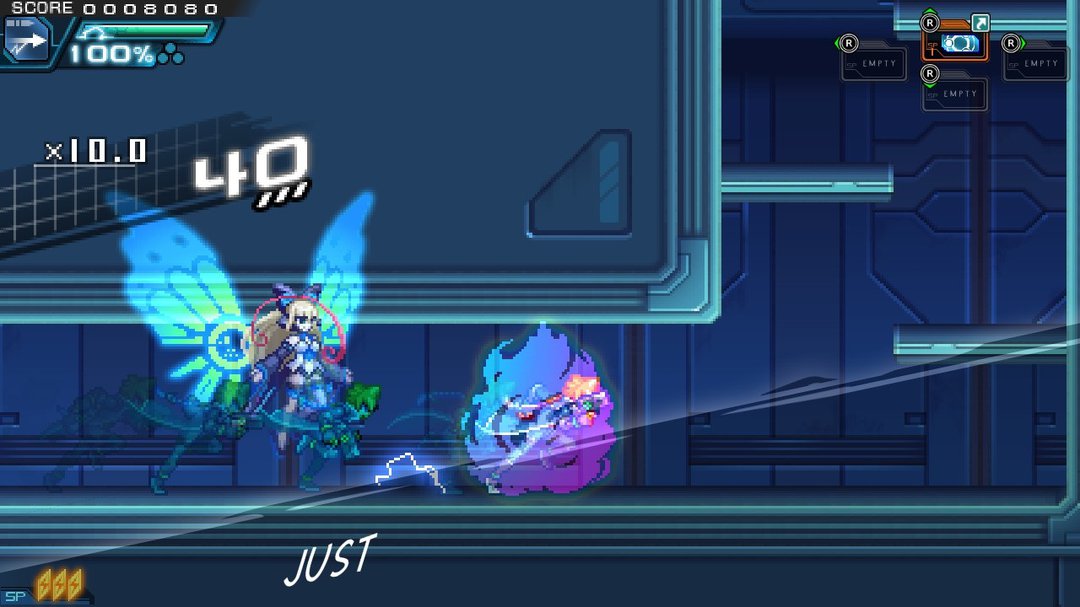 To make matters worse, there aren’t any English voiceovers. Unless you’re fluent in Japanese you’d have to ignore the action just to read what people are saying. The last thing you need when you’re racing at top speed through a level or locking horns with a powerful Adept is to get distracted trying to see what your partner thinks about your other friend back at home.

And the worst part of all is that you can’t even turn the conversations off unless you’re going back to a mission you’ve already finished. Your first time through you have to listen to every single word. This is, by far, my biggest problem with this game. The dialogue gives a couple of nice character building moments, but on the whole it’s distracting, unhelpful, and completely unnecessary. 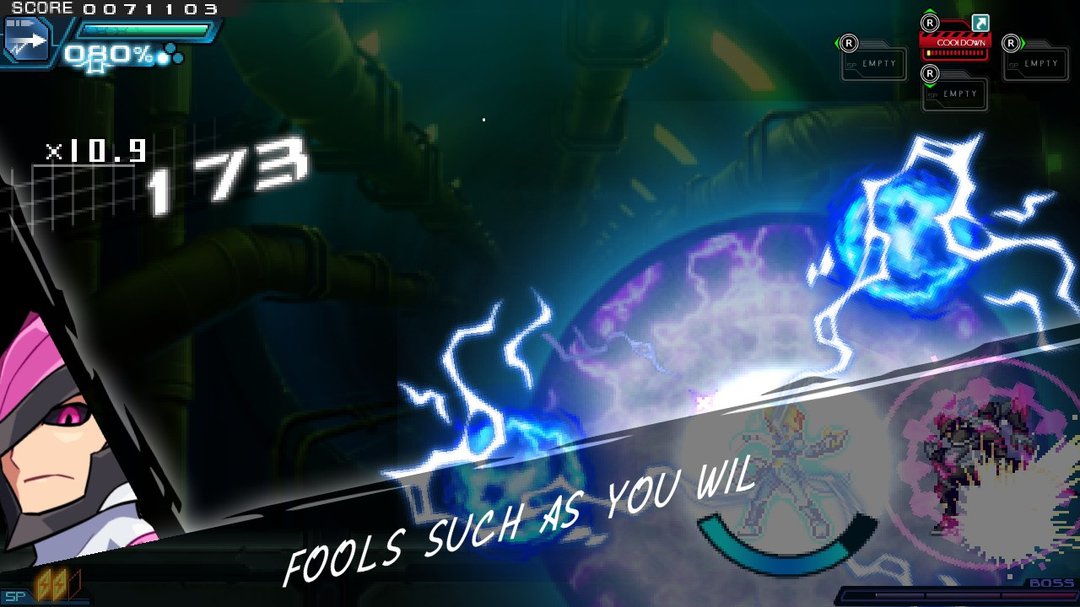 Sorry, I can’t hear you over the lightning.

While just finishing the game probably won’t take you very long, digging into the challenges and speed-run mode gives t 2 is a lot of fun. Whether you want to leave Prevasion on and see how quickly you can fly through a level (or actually be able to read the conversations), or turn it off and give yourself a white-knuckle challenge, it can adapt to your skill level and playstyle.

While just finishing the game probably won’t take you very long, digging into the challenges and speedrun mode gives ASG2 a lot more replayability than you might expect. If you’re a fan of the action platformer genre in general, and especially if you enjoy the Mega Man Zero series, Azure Striker Gunvolt 2 will be well worth your time.