The Wackiest of Workplaces 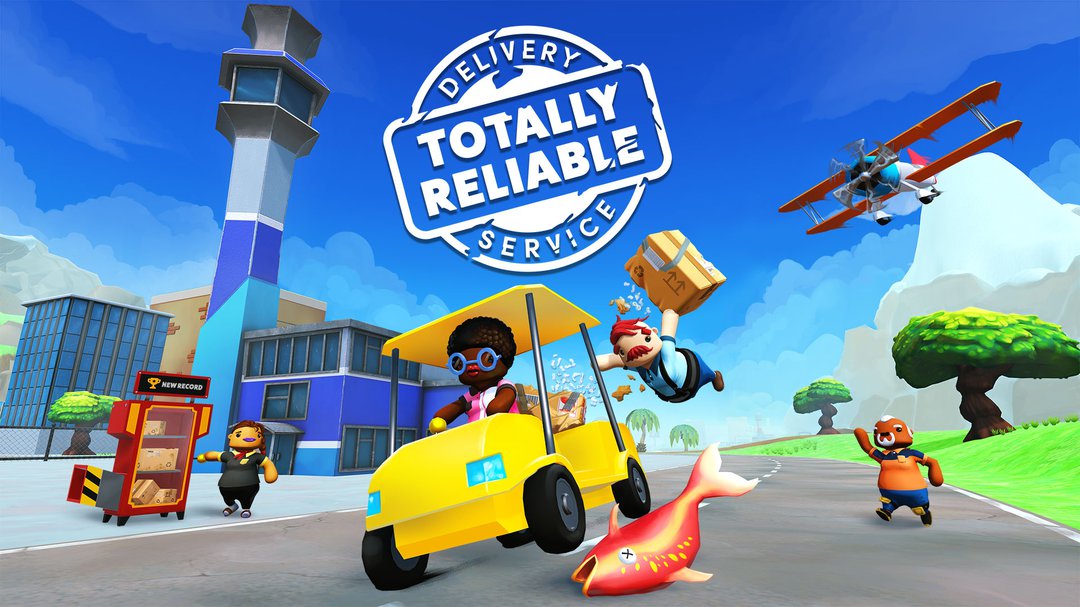 The Totally Reliable Delivery Service would like you to know that we’re here for you in today’s fast paced world. We get it, you’re busy. You can’t afford the minutes it would take to pick up that toilet paper or those bags of chips. That’s where we come in! Our team of highly trained specialists will ensure your desired products reach the doorstep of your home or business in as little time as possible! Whether you live in the city or at the top of a mountain, your satisfaction is guaranteed. You can trust in Totally Reliable!

Or can you? Hope those customers read the fine print because their deliveries are in for one wild ride! 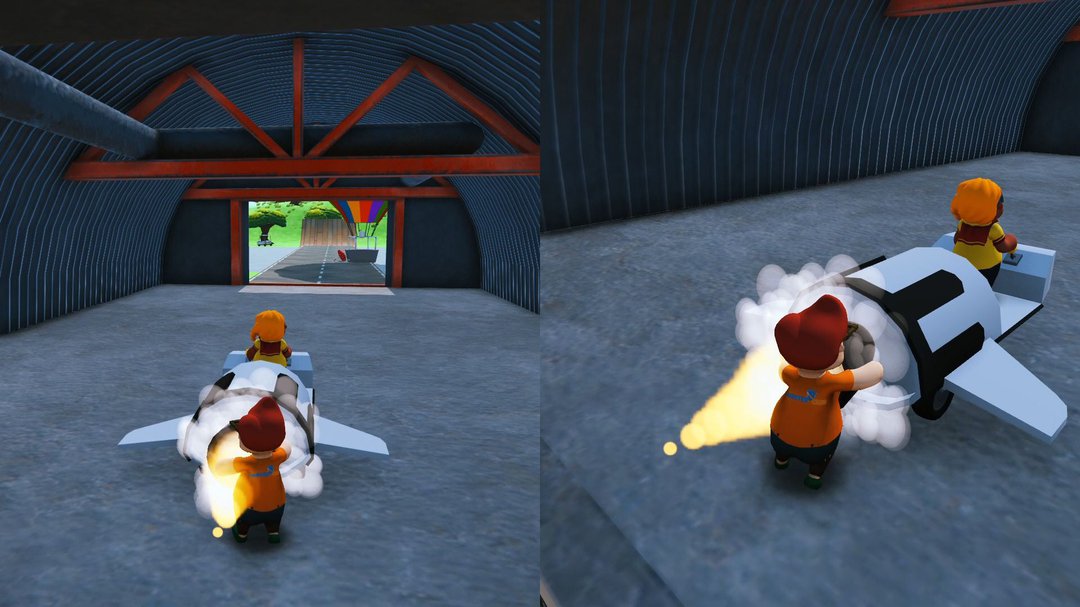 It'll be fine. Whatever this is, I'm sure nothing could go wrong! It's fine.

Totally Reliable Delivery Service is the new wackiness out of tinyBuild, a studio known for its characteristic sense of humor and give-no-effs attitude for mixing liberal amounts of laughter into its gameplay. Remember our review of Streets of Rogue? Yeah, that’s level of silliness we’re talking. What we have here is a physics game in which you and your friends try and deliver boxes to various drop points around the map in one of two styles: with as little damage to the box as possible or as fast as you possibly can (you guessed it, final condition be darned). At first, things don’t seem so bad. Run a package to the restaurant across the street. Shelve some boxes in the warehouse with the forklift. But good luck when you need to deliver a barrel of explosive fuel via helicopter, and the barrel jostles around as you fly, and the barrel can explode if it’s upset too much, and the helicopter controls like some modern rendition of a classic Lunar Lander game. For the record let it be noted that bursting into a fireball midair when your cargo goes nuclear is just as hilarious as erupting in flames from colliding directly with the side of a mountain.

And this is assuming you don’t just take off, get 20 feet in the air, and the plummet sideways in your helicopter like a 10 year old kid who’s hit the pothole in the sidewalk with his bicycle and gone head over heels. In fact that’s not even the half of it! Boxes will be sliding around in wide open flatbeds, launched off conveyor belt trucks at air traffic control towers, ending up in the middle of the road, or worse (say under your vehicle which has flipped upside down when a manhole cover blew directly underneath it). Heck, my friend once lost both his delivery and his pants in a tornado. I wish I could tell you I’m making this up. I’m not. 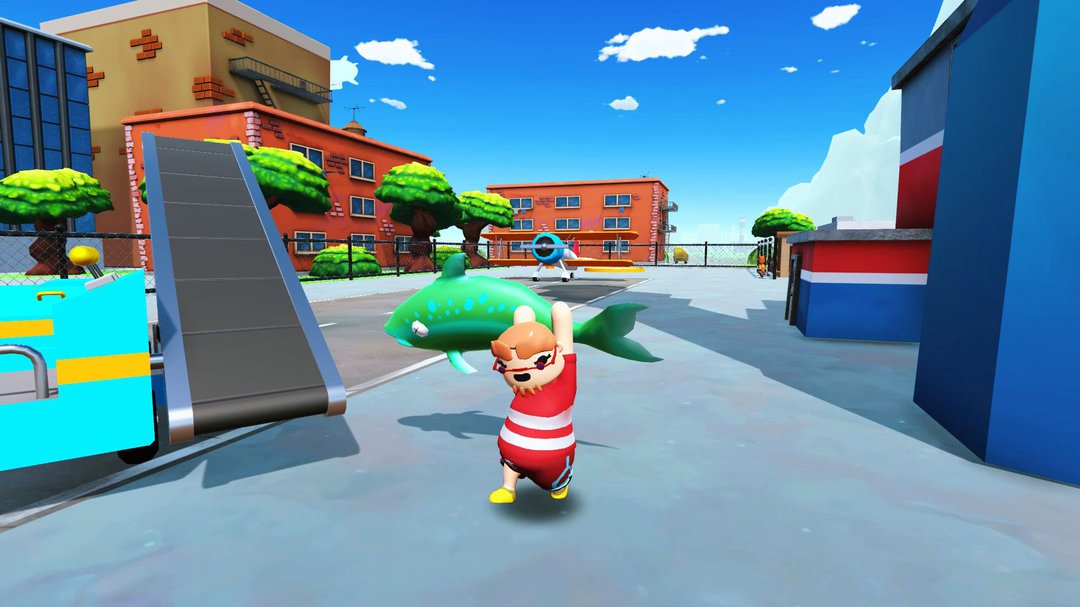 Figuring out inventive ways to do things, though, might just get you that gold you're after.

And yet, like some Faustian hero who’s traded common sense for immortality, no matter how many times you’re blown up, no matter how far a height you fall from, no matter how bad you misjudge a situation, your character will always dust themselves off after a short stint in the dirt. Packages are blissfully unlimited, and nothing stops you from trying your hand at another delivery. Nothing. Not your friends “accidentally” backing over you with a truck nor intentionally taking a risky, totally unnecessary jump and landing you in the ocean (I do not speak from experience, having never, ever done either of these things nor would I ever, I’m totally innocent).

This game is joyously silly, as you would expect of any game in which each arm is controlled by a separate joystick and each grabby hand has its own trigger button. Tragedy will befall you in the most hilarious of ways, and true to the lighthearted spirit of this game, while you may occasionally feel a tinge of annoyance at having to try a delivery a second time (or a third, or a fourth), most of the time I found myself laughing uncontrollably as my delivery worker ragdolled in new and interesting ways. 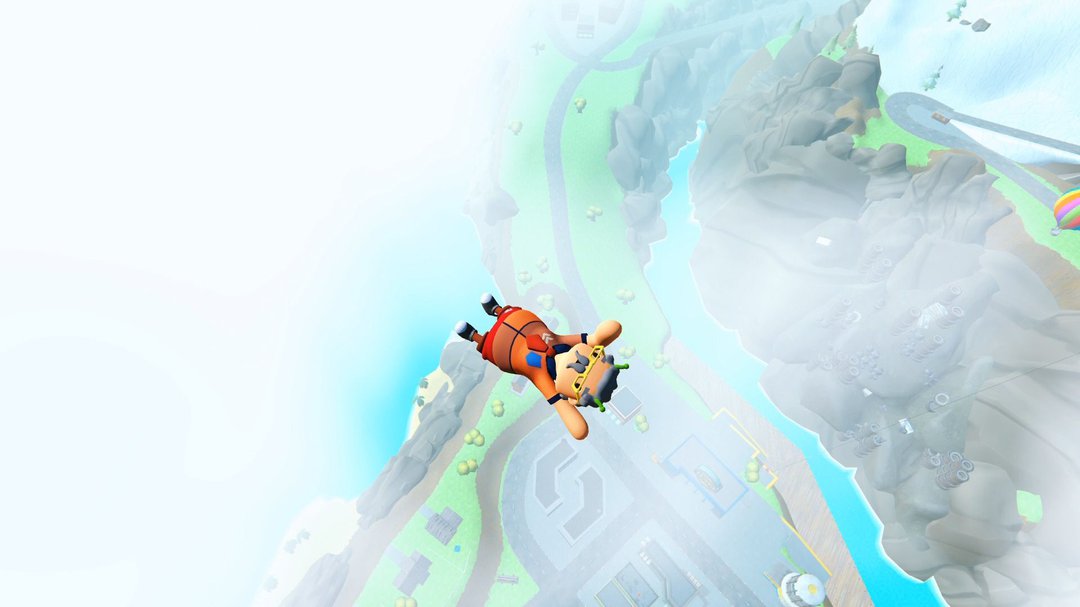 No parachute? No problem!

This game presents itself in two phases. One which I’ll call “discovery” and a later one I’ll refer to as “challenge”. At the start of discovery, you’ll be content just to bum around with your friends and see what this wacky world has to offer. The map is fairly huge, and deliveries lie peppered around the cities, beaches, and other points of interest. There are a ton of vehicles, each with their own quirks, and it’s just as enjoyable to try out a new mode of transport as it is to uncover a new locale. The game is fantastic in these early hours, a symphony of catastrophe as you and your friends bumble and bungle as much as you manage to get right. Victories feel like real accomplishments, and when things go wrong? Often the results are funny enough that no one cares anyway.

But then the game takes a turn. You start realizing you CAN master the helicopter’s seemingly suicidal controls. You learn how the dune buggy drifts, and that the three-wheeled truck just needs a little braking around the corners. Before you know it, you’re no longer crashing into everything in sight. And the game becomes less entertaining for it, right? Wrong! I’m happy to say that once you realize it’s actually possible to respect the challenges, earning bronze, silver, or even gold for your hard work, a whole new level of fun opens up. You hop a ride to the local airport so that you can fly a plane across the map quickly for challenges you want to get better ranks on. Sure the hang glider is a pain at first, but after you learn how it works, zooming down off a mountaintop with a package dangling from your other hand feels almost superhuman. At some point you turn around to realize you’ve been working hard with your friends (or just by yourself) to really dig in with all the challenge this game has to offer. And that’s really satisfying, too.

Me? I went from Launchpad McQuack status to landing helicopters on a dime. Any time a delivery called for a helicopter pilot, my friends defaulted the legwork to me, and it felt darn good. We still don’t talk about the time I had to fly a delivery to a zeppelin while it was in flight, mid-stratosphere though. 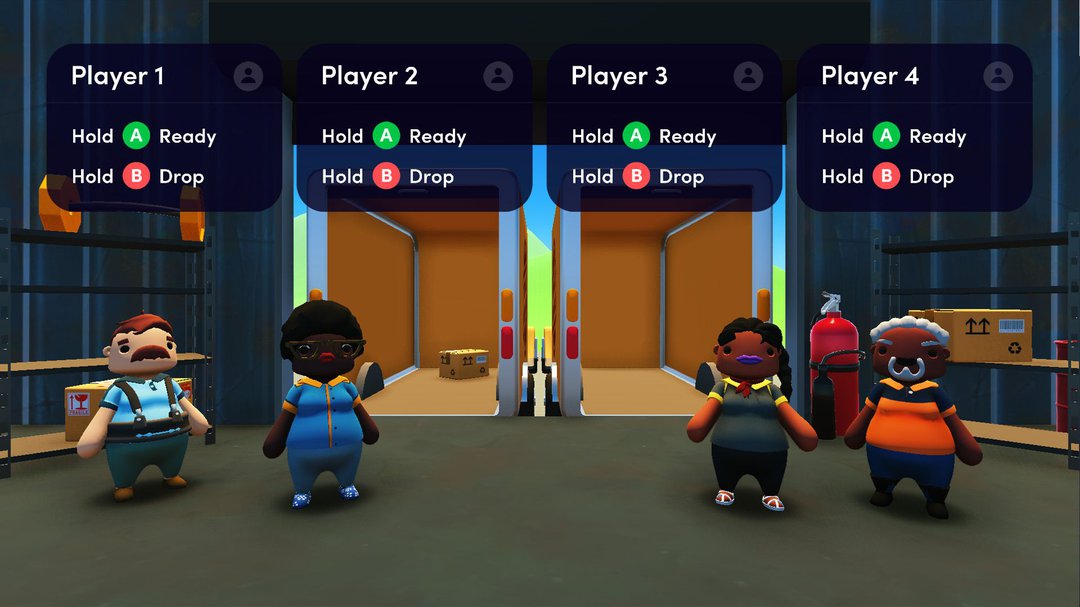 Character selection is hugely customizable. A big plus to this game!

Still For A Certain Crowd

If it’s not clear by now, I think that Totally Reliable Delivery Service is a blast both for casual gamers looking for a wacky time and serious gamers who like aiming for shiny gold medals on challenges. The medals, by the way, unlock cool cosmetics so there’s some incentive to go for those silvers and golds, as well as earning you extra cash you can spend on nifty paint jobs for any vehicles you spawn. This game works well if you’re solo or with friends, though I think it’s definitely more fun when more people with controllers are “working together” (massive air quotes here). And if you’re a Twitch streamer reading this, I think this game is perfect for an audience; heck, even if you’re just having a party (though at time of publishing this is more an option for future dates), this makes a great game for those that want to play for a while before passing the controllers around. It’s incredibly entertaining just to watch while it makes its rounds.

So who isn’t this game for then? My biggest concern lies with people who want a little more structure in their games. You won’t find any greater story here, no bigger motivation to do what you do. Outside of the aforementioned challenges scattered throughout the world, there’s really nothing giving you any further guidance. You could just hop in whatever vehicles are lying around and mess around in the world if you wanted to, never actually clocking in at any delivery stations. That will be a definite draw for some, but for the kind of folks that are left craving after the novelty of the sandbox wears off, you might find yourself losing interest. In games like Streets of Rogue, tackling each new level, new challenges and personal objectives to the class you’ve selected, there’s the satisfaction that you’re working toward something greater. In Totally Reliable, the satisfaction is in the moment. That’s not a dig against this game. Rather it’s a question of fit. I’ll admit that even with as much fun as I had, I couldn’t put in more than an hour per sitting, maybe an hour and a half. This may not be a game you play for hours on end, or maybe it’s the kind of wacky open world you’ve been craving. Those that fall into the former might want to watch some gameplay videos before deciding on a purchase. 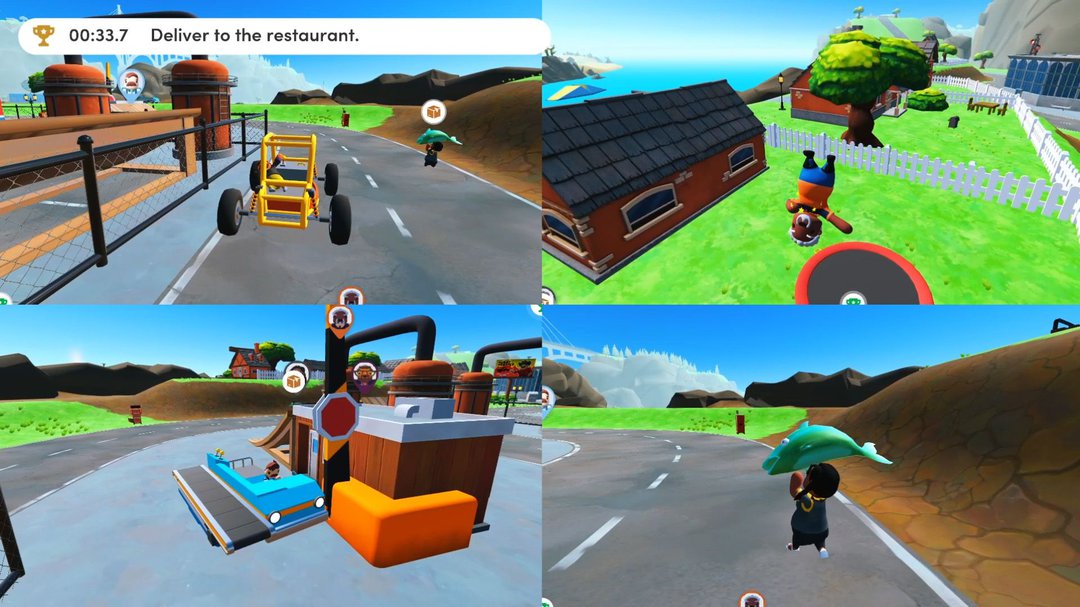 All in all, I think Totally Reliable Delivery Service is, for what it offers, a masterpiece of misfortune. If you’re the type who loves games that give you the freedom to do things whatever/whenever/however you want, you’ll fit right in with this title. Be as wacky as you please. Play it solo or with friends, though again in my humble opinion the experience is definitely improved with friends. If you’re looking for a fun time for only a few bucks, and with more than a few laughs, tinyBuild has certainly delivered another gem. This game is everything that characterizes the studio from which it comes, so if you’ve been looking for a sandboxy game of this sort, do yourself a favor and go check it out!