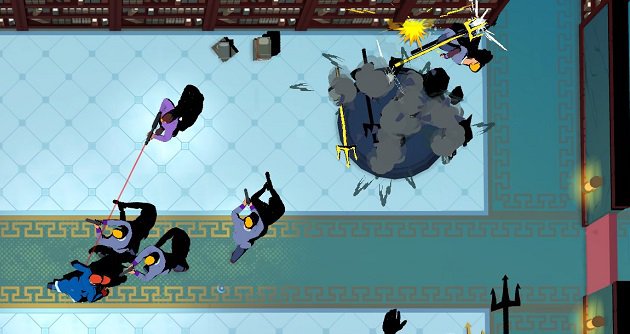 There’s a market for this sort of thing: barely contained, high-octane violence, stylized and ramped up to 11. From Hotline Miami to Enter the Gungeon, we’ve seen a massive influx of games which offer low entry, highly flavorful games to enjoy of this style. This last Thursday, Mr. Shifty was released into this growing market; boasting its own unique animated style and teleport-based combat, Mr. Shifty tries to do something different to make it stand out from the rest. The two questions are, does Mr. Shifty succeed at feeling different, and is the game right for you?

The Premise: Let’s Rob A Supervillain!

There is a plot to this game, I swear. It involves you, Mr. Shifty, and your loyal tech support staff Nyx breaking into the evil lair/corporate office/skyscraper of Chairman Stone. He has mega plutonium, and that’s bad. Someone should probably do something about it. While there is no spoken dialogue, there is written commentary, and the way Chairman Stone speaks certainly has a bond supervillain air about them; his what-should-be-an-office has a bunch of unnamed goons in there which he seems more than happy to throw into death traps, which are also sprinkled randomly through his should-be-an-office.

I will be honest - the monologues you recieve were enough to make me laugh in my office multiple times throughout the game.

Fortunately, Mr. Shifty is on the case, and his entry in the first level is wonderfully explosive. There isn’t much reason given about why your character in particular is so determined to stop Chairman Stone, or exactly why you have the ability to teleport or break apart walls and any office equipment you like with just your bare fists…but honestly, that’s not the point of why you are here. Mr. Shifty gives no excuse about being a video game, and nor should it have to. It harkens back to the old days of Megaman and Mario, while still having tongue-in-cheek commentary throughout. The levels get harder, the stakes are raised right alongside the difficulty, leading towards dramatic end-level sequences and fights that leave you breathlessly laughing from excitement.The combat is the reason you are here playing this game. You have fists, and you use them to throw people about the level as if they were rag dolls – your 1-2 combo is enough to knock out nearly every enemy in the game alone. Unfortunately for you, you seem to have a deep adversity to guns, which your opponents do not. Even worse, one shot will take you out. Good thing you can teleport, and teleport often. You can rapidly blink your way through walls, doors, and between foes up to 5 times before a quick refresh time has to occur. Using the level to your advantage is a key tactic that you have to keep learning as enemies get more attacks, and more of them appear.

The Good: Nightcrawler With Attitude

Remember that scene that X-Men 2 started with? You know, the one where secret service agents are going down left and right, and they think there are at least five enemies in the White House (when there's just the one)? That was absolutely the pitch behind this game: a game designer wondering how to make you feel that bad ass in the quickest way possible. You can’t use guns, but honestly, after a few levels you really don’t miss them. Your punches are so hard that you can knock doors off hinges to KO an enemy who is waiting behind the door with pistol drawn. Punching people through windows is almost as satisfying, and in case you ever get bored, you can break office equipment to find keyboards or wooden poles to hit people even harder with. Picking up soda cans and coffee mugs lets you hurl them like fastballs to knock people out across a level. As the levels get harder, even more dramatic ways to use the environment against your opponents are revealed. 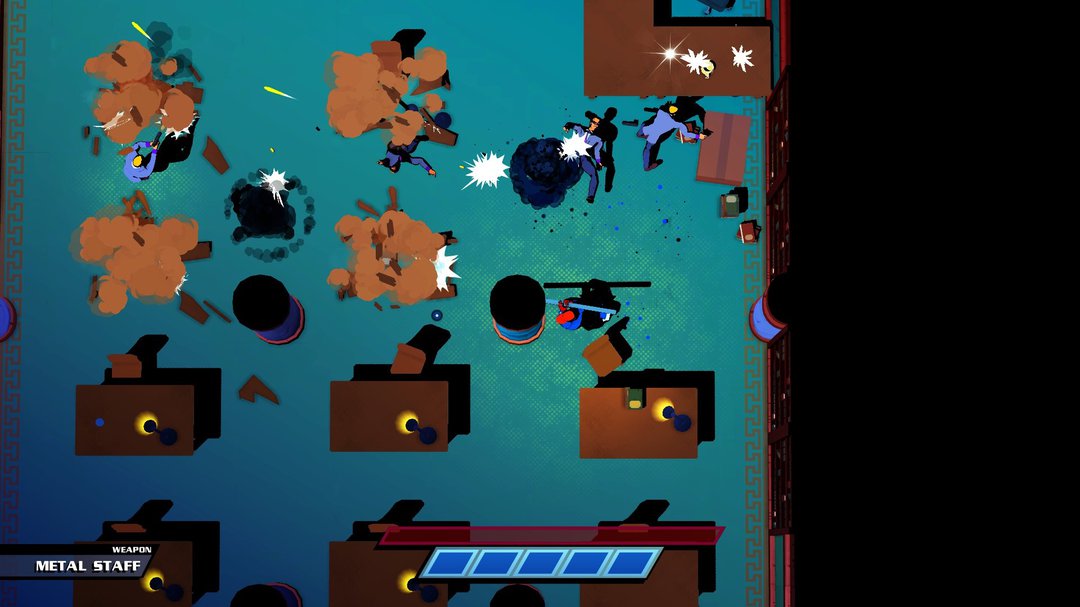 Teleporting is just as satisfying, for one reason that becomes more and more important as the game continues: friendly fire. Suddenly appearing in a room filled with machine-gun toting goons is a anxiety-inducing thrill, but punching one and vanishing back through the wall guarantees a gleeful rush as one of them is inevitably shot by their own compatriots by accident. This game thrives off adrenaline bursts: one shot will kill you, but the ability to take on five, ten, twenty foes in one room is divine. To make matters even better, the game rewards you for aggressive gameplay: if your charge meter fills up from continuous attacks, you gain a 'bullet time' effect the next time a shot would kill you, allowing you to dash out of the way... and promptly take revenge on everyone else in the room while they are still trapped in stasis. If you want to feel powerful, this is the game for you.

We need to talk about the inevitable comparison: Hotline Miami. It was a game that, unavoidably, had a lot of influence in the creation of this game, and for that, deserves credit. However, there are some dramatic differences, most notably in tone. Hotline thrives off a gritty, dark and broody atmosphere, filled with blood and violence – it succeeds in spades in accomplishing this goal, but in doing so, made it somewhat inaccessible for some. It’s also infamous for being so difficult it’s point of entry is also a turn off. 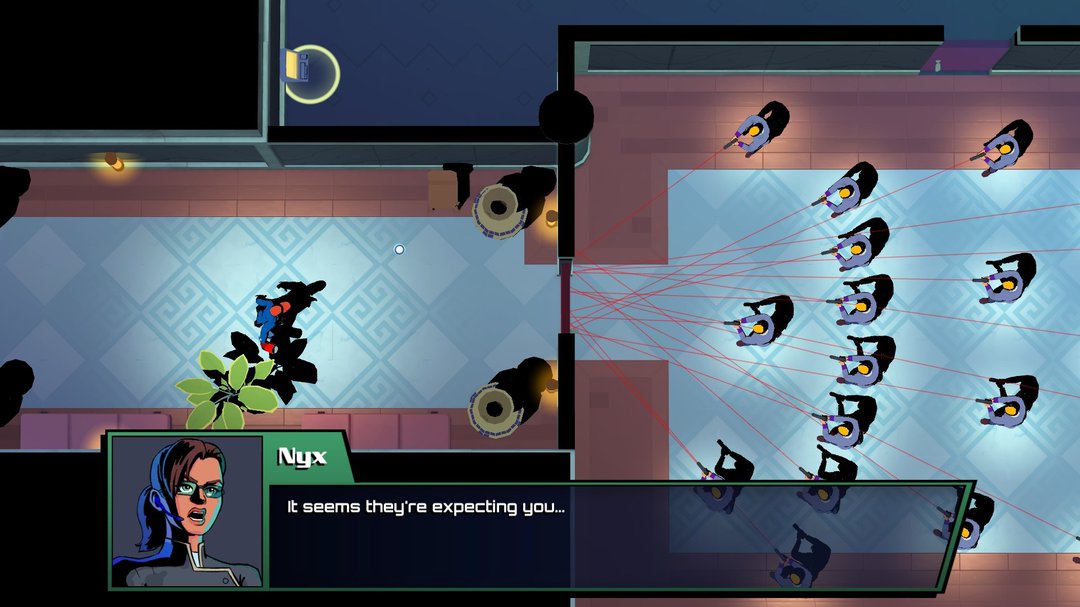 A large part of the fun of Mr. Shifty is being presented with crazy situations like this, and then beating them with as much chaos as possible.

Mr. Shifty is not trying to punish you for playing the game; instead, it empowers you. Levels are set up to teach a new concept – playing with laser beams, for example – and then being able to use these concepts to either survive, or utterly destroy a room full of bad guys in a moment of cathartic bliss. Believe me, there are certainly some difficult sections to the game as the end draws near, but Mr. Shifty is an easier experience that rewards you for trial and error. In addition, while Mr. Shifty certainly does some rather rude things such as punch people out windows, it isn’t glorified with buckets of blood, giving the game a much more cartoony, comic-book vibe. While games with different difficulties are a great thing, Mr. Shifty benefits from being more accessible.

The Nitpicks: Teleporting In A Straight Line

If there is one particular setback, it is that Mr. Shifty is a shorter game than many others in this style. Beating the game for the first time took about 5-6 hours only, and for some, that might be too short. On the other hand of the spectrum, some people might think the game is a little too long: Mr. Shifty was built on one trick. It’s a beautiful, amazing trick, but it is still just one trick. Games like this have to strike a balance between trying everything they can to create level variety, and wearing out their welcome. For me, Mr. Shifty lasted just long enough, but that might not be the same for everyone. 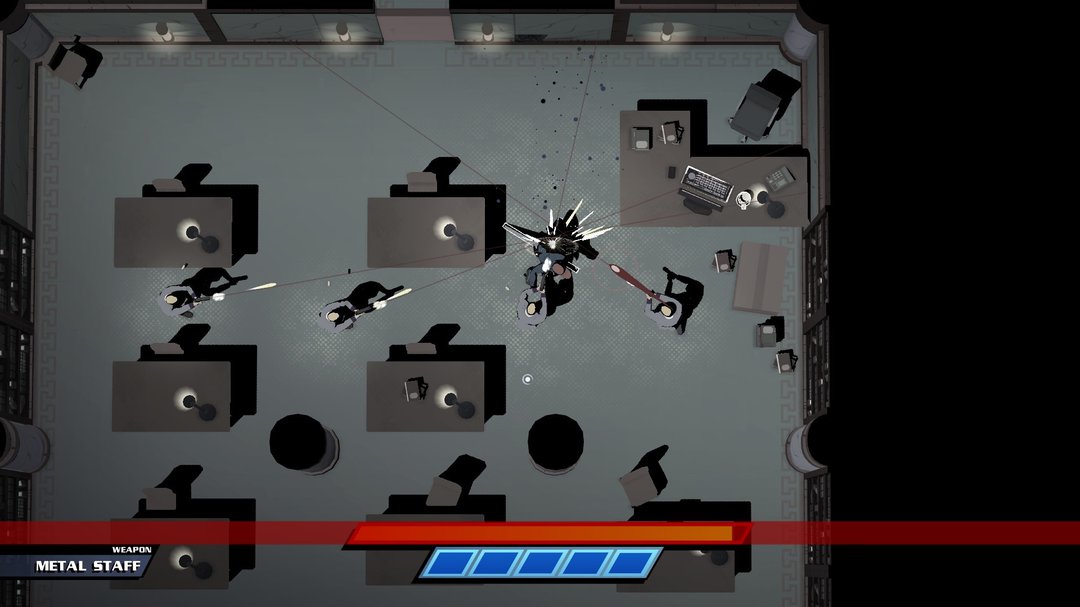 Don't stop moving. Don't ever stop moving, or those laser-sighted guns will catch up to you.

In the same vein, I appreciated the more accessible level of difficulty that Mr. Shifty brings, but many people familiar with this top-down style of combat typically expect games to have a punishing curve. Keep in mind that Mr. Shifty is a much more linear, level-based experience than many of the procedurally generated games that people expect now. This isn’t so much a criticism as simply making sure people are aware of what they are purchasing.

The only other issue I can think of is that Mr. Shifty is a bit more taxing on your system than you might expect: I originally started playing on my old laptop, which can operate moderately well, and I found the game stuttered occasionally when too many laser or flame effects happened all at once. When I played on my recently purchased desktop computer, I saw no frame-rate loss. Just be aware that Mr. Shifty is a game with more graphical intensity than you might expect, so older computers might suffer.

One of the best things that Mr. Shifty does is take the top-down action genre a step back towards accessibility, while still making you feel like a bad ass. Make no mistake, your character still dies horribly with one errant bullet, or one mis-judged teleport… but you can teleport. The ability to cause chaos is Mr. Shifty’s lynchpin, its recipe for success. There is no satisfaction quite like seeing bookcases explode, office tables break apart, and walls vanish as you punch and weave your way through a floor filled with gun-toting thugs.

If you are on the fence for this game, make no mistake, it is worth your time. Every new trick you pull off makes you feel clever, and every floor you complete gives an immense amount of satisfaction. For only fifteen dollars, I can recommend that you get this game for yourself, or put it on your wishlist for a rainy day where you just really, really need to punch things.