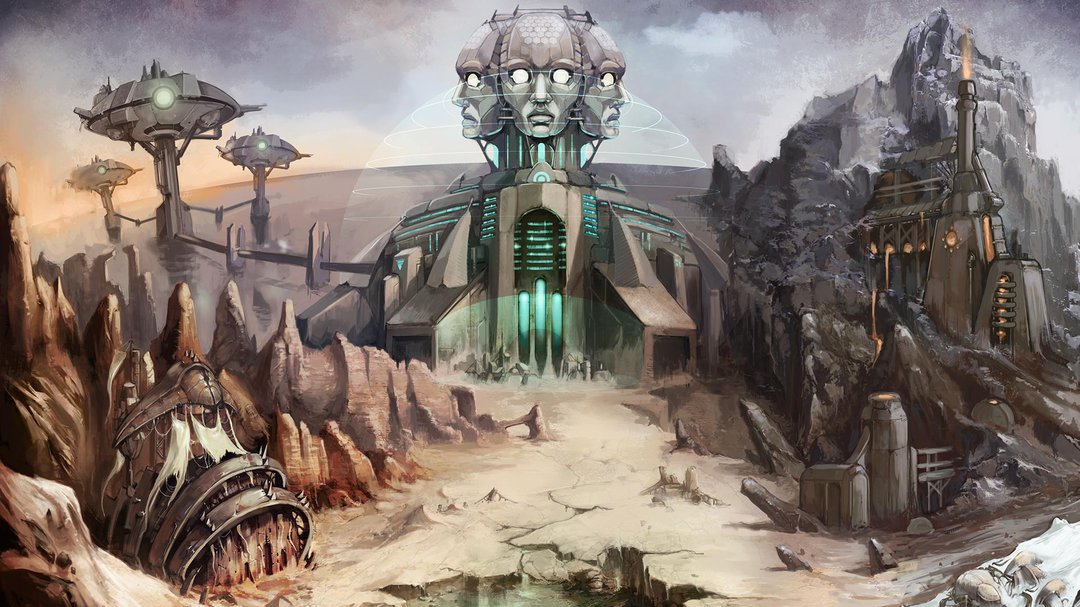 Do you like heavy eurogames, dear reader? Do you salivate over glossy, oversized boxes filled to the brim with tight mechanics, eye-popping artwork, a solid theme, and the promise of crushing your friends with your superior intellect? I've been saving this review for you for months, ever since the first print run of Anachrony went out of stock. A message from the future is telling me that this one is going to be big, and with August upon us, a second print release is imminent. The time has finally come.

Anachrony is a worker placement game set in a distant future where humanity has begun to experiment in time travel. A great cataclysm has turned the planet into a wasteland as the remaining populace shelters in refuges belonging to sects of four differing philosophies. Through their dabbling in time travel, they have learned a second cataclysm is approaching. You will need to develop quickly if you plan to evacuate before the disaster causes the downfall of Earth, and the player that accumulates the most points in developing their faction will lead humanity into a new age. What could possibly go wrong? I mean besides the inevitable destruction of Earth. 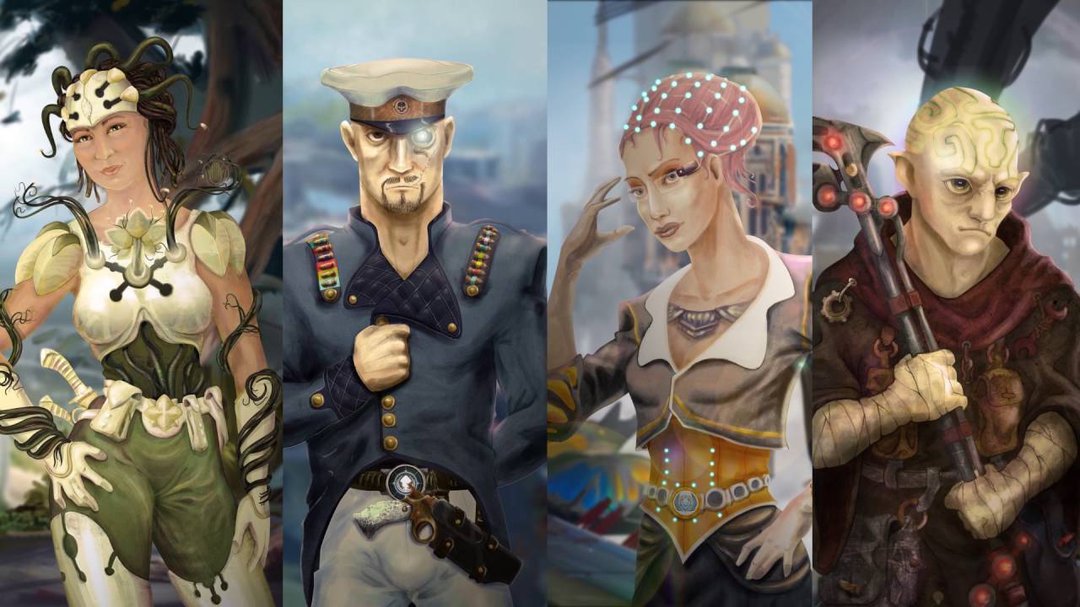 Asymmetrical factions, each with two different leaders to slot in, ensure there's always a playstyle to fit everyone.

A game of Anachrony sees players utilizing worker placement to claim the resources they will need in the face of the coming cataclysm. This is done both on their own, personal player boards as well as the main board. As players gather materials, construct facilities back in their home base, and recruit more workers to staff their projects, they will make available more and more spaces to slot those people in their faction's refuge. These spaces, once built, tend to be very efficient and have the bonus that no other players can use them! There's only one problem: to gather resources and take the "better" actions on the main board needed for construction, workers will need exosuits to brave the wastelands. You have to pay for these suits with valuable energy cores at the start of every round, which is a heavy cost if you should find yourself beaten to a space you desperately want; once powered up, that energy can't be refunded. The dual nature of the worker placement in this game adds to its sense of danger and urgency, and I love it!

If you find yourself too slow to grab a resource or worker you desperately needed, though, fear not! Remember how I mentioned the factions dabble in time travel? Well, at the start of a new round, your future self can send what you need back to your current self. Now you have exactly what you need! A free gift from yourself, from the future! Try not to think too hard about the implications of not paying a resource later to send back to your past. I'm sure nothing bad could possibly happen by not closing that little loop in time you've created. Actually, paradoxes suck; they're worth negative victory points and they clog up a space on your board! They cost you majorly to remove, and they may keep appearing if you don't pay back that loan you took from yourself. How desperate are you for those things you need? 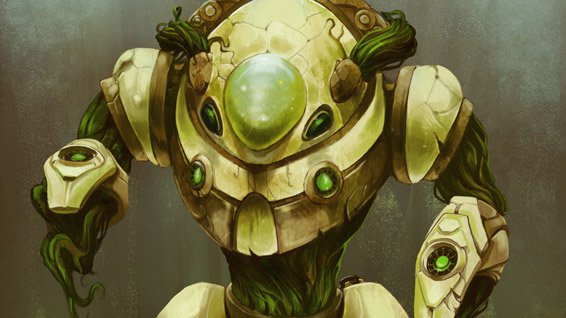 The exosuits are as flavorful as the factions they come from. Every piece of art in this game is rendered in as stunning a style.

A new superproject is also made available each round, representing a powerful technology that will give you a massive boost in victory points and a unique power for the rest of the game if you can build it. To claim them, you'll need to spend actions sending your workers to research scientific breakthroughs (a seperate currency), and they will cost you in regular resources, as well (the same ones you use to build everything else). Prioritize wisely.

Play continues round after round until the cataclysm hits. At that point, all the action spaces in the middle of the board receive a random tile, boosting their abilities but flipping and sealing them permanently after one more use. This represents the capital crumbling as everything comes crashing down, and the game ends when either three more rounds have passed or all capital spaces have flipped to their collapsed side. You tally up points for your overall team morale, for any buildings and superprojects you've built, if you've met your evacuation condition, and some other bonuses found both on your faction board and shared commonly amongst all players. Also, if you've managed to borrow things through time and pay them back in the course of the game, your successful experiments into time travel earn you even more points. Subtract any points for paradoxes and unpaid loans, as well as if you are particularly low on your faction's morale track. The highest total after all's said and done is the winner. 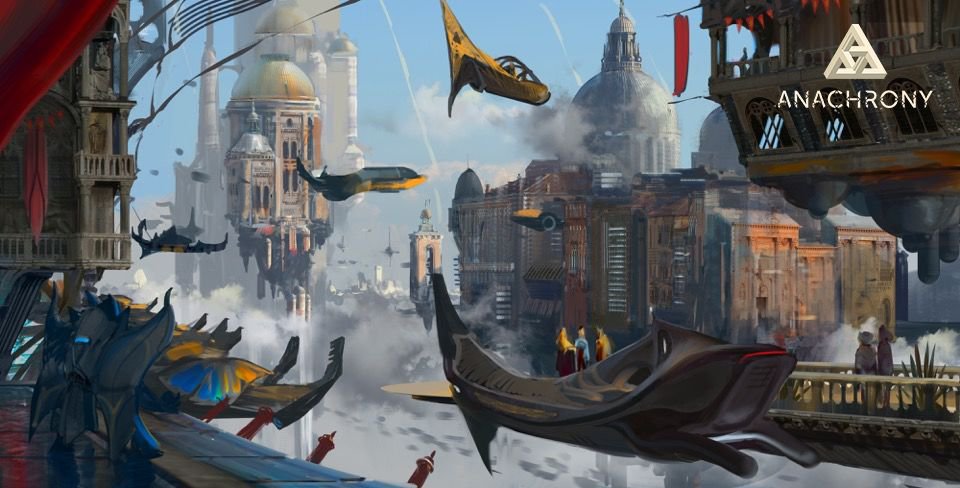 The Path of Progress makes its home in the skies. It gets research related bonuses and can more easily achieve superprojects. Their exosuits are also lions with jetpacks!

If you couldn't tell already, this game offers a plethora of strategic options that any lover of heavy euros will appreciate. I've played over half a dozen games already, enough to understand more than the basics, and I'm still not sure what the best paths to victory are. Dedicated superprojects? A factory heavy build (there are four types of buildings, each with a particular usefulness)? Focus on time travel? Maybe a balanced approach? And of course, your chosen faction will influence everything from your ability to collect and manage resources to the strategies you're incentivized to pursue. The fact that I haven't cracked how best to play this game just makes me want to play it more and more.

The production quality of this game is off the charts, as well. I've mentioned the artwork already to no small degree, but all the components are wonderful as well. The cardstock and even the box are nice, thick, and satisfying to handle. The plastic resource cubes are a classy touch, and while the first printing had some cracking and color issues (two resources were difficult to tell apart in low light), the reprint is fixing these issues. Even the rulebook, which was fine for learning the game, is receiving an update based on user FAQs from BoardGameGeek. Finally, the iconography, while seemingly alien at first, is easy to get used to; it clearly reminds you about rules and what tokens can go where without cluttering the board in the slightest. I love when this stuff is printed clearly on the components so I don't have to go hunting in the rulebook mid-game to figure things out.

I should also note that the faction boards are double-sided. So, like 7 Wonders and Castles of Burgundy, you can teach the game on equal footing without new players having to worry about keeping track of faction-specific differences. You can then flip to the "B" side of the boards for asymmetrical, individual gameplay. After I teach the game to someone new, we never return to the "A" side. 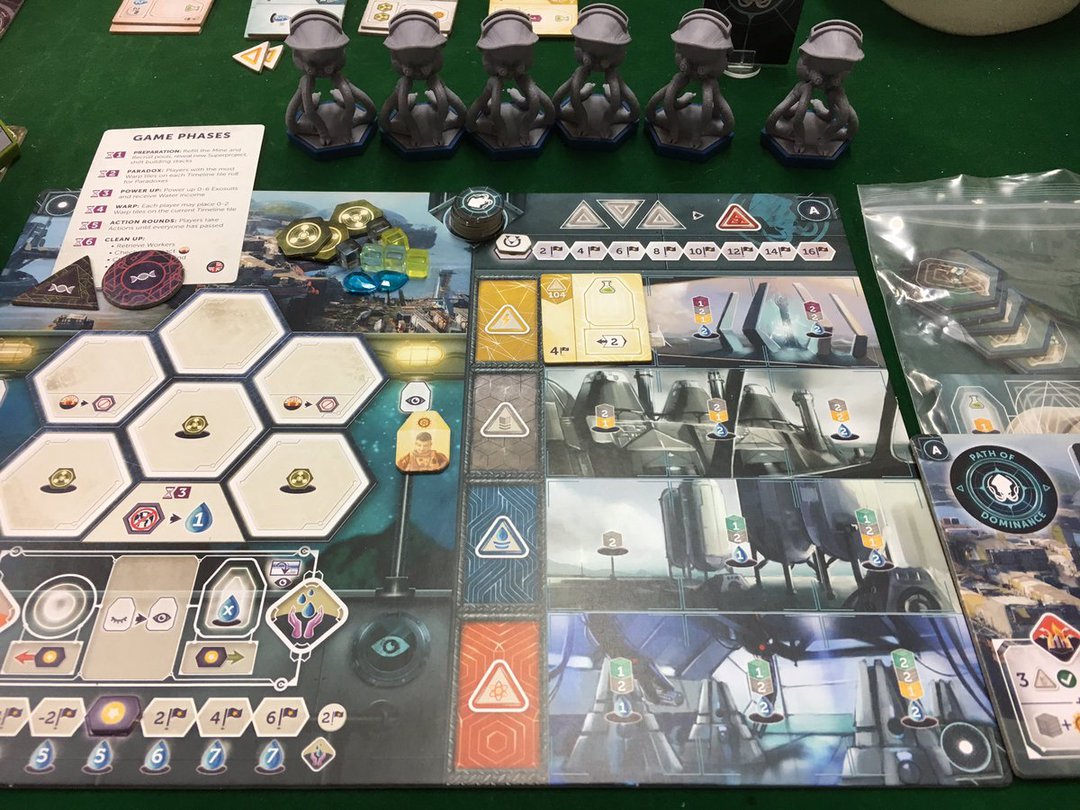 If all that isn't enough for you, the base box is extremely generous. A mini-expansion is included, adding a small side board and deck of cards that affect the cataclysm itself. You have the potential to bring it about sooner or stop it altogether! While I've not tried it yet, I have to say that just the idea it was included at no extra cost in an already robust box makes me love the developers even more.

I'd also like to take a moment to mention the Exosuit Commander expansion. For an extra $40, you can replace the cardboard exosuit tokens with sculpted minis (unpainted, of course). Not only that, but they actually have an opening in the top where your workers can slot in, and yes, they are distinct for each faction! There are two modules within the expansion box that you can slot into your game as well. Again, this box is generous with its content, though I'd happily buy it just for the minis. I strongly recommend you pick it up if, like me, you like the full effect of blinging out your board games. Oh, and if you remove the insert from the base box, the tray with the minis fits perfectly into it along with all the other components. I appreciate small details like this clear forethought on storage.

The four faction exosuits and the Chronobot (used for the single player variant, also free in the base box).

A Project Worth Your Resource Cubes

I could go on and on about this game. It ticks all the boxes for me: it's wonderful to own as a piece of art; the mechanics are super solid; victory isn't an obvious set of moves; the theme is as solid as the gameplay; it scales well from two players up to the full four; it's generous with its content; it looks GREAT on my shelf. I've heard some people complain that the time travel is nothing more than a simple loan mechanism, but I think thematically it fits the game perfectly. I easily lose track of the borrow/pay back nature of the time travel when it's wrapped up in the construction I need to accomplish to be able to achieve it later in the game and the threat of paradoxes. It might just be a simple loan, but it feels like time travel to me, and that makes all the difference. Likewise, when the cataclysm hits, it's not just the endgame triggering. I feel the urgency to accomplish my plans and get the heck to that evac ship!

If you've been looking for something new in the "heavy euro" vein, this is one you'll want to grab for sure. Given the genre of worker placement being perhaps the largest in our hobby, it feels fresh like a new coat of exosuit paint. I strongly recommend picking up the Exosuit Commander expansion, as well; the game really looks great on your table with its addition. You can currently preorder the base game's second printing on Mindclash's website, and the expansion is in stock there, also. The expected shipping date for the second print run is this month, as per their website, so you don't have long to wait. Just make sure that if your future self appears and hands you money to pay for this game, you pay it back in a timely fashion. Paradoxes are no joke!

We have lots of other great board game content here on Sprites and Dice. Take some time to look around, and let us know what you think. You can reach us on our Facebook page. If you really like what we’re doing, please consider supporting our Patreon. We like to keep our content add-free, and even just a dollar helps a lot.