Mind Reading For Your Survival 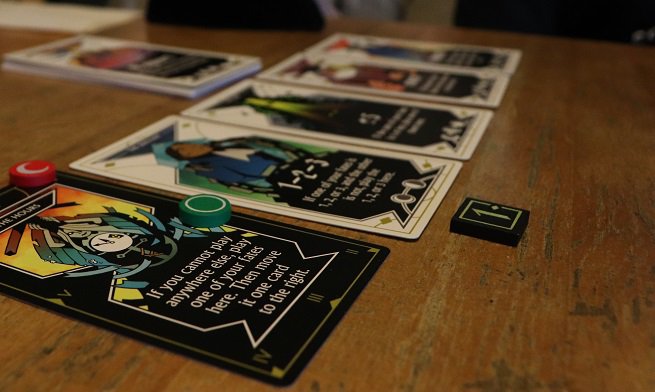 If you could tell the future to save your life, would you? How about your friends? This is in a nutshell the basis of The Shipwreck Arcana; you and your friends are trapped in a situation where a watery grave is soon about to overtake you. However, thanks to the deck of mystical cards at your disposal, you might have a chance of foretelling your doom, and thus, avoid it. 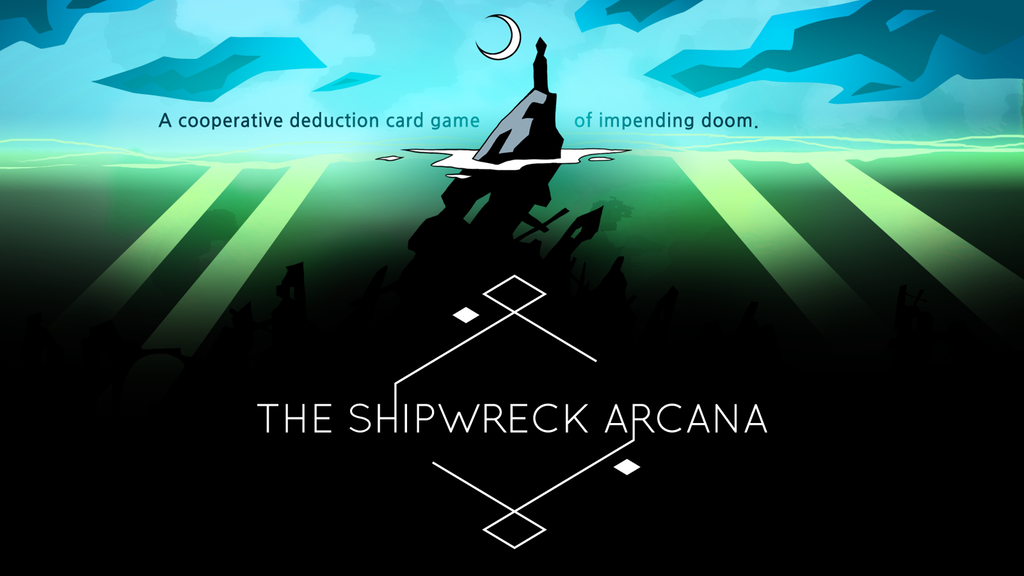 The art in this game is top notch.

This is a co-operative game. This is a weird game. If you are looking for a straight forward experience, look elsewhere. However, for those of you who are searching for something different, who want to feel as if you are diving into a world of esoterica and logic, read on.

The Premise: What Number Is Your Friend Holding?

Gameplay, despite the abstractions, is actually straight forward: there is a card called “The Hours”, which works as a game track. If you advance your team’s tracker of successful predictions to seven, you win. If the doom tracker advances to seven instead however, your fate is sealed beneath the waves.

Your team’s successes are achieved through managing to guess a number from 1 through 7; when it is your turn, you pull two numbers from the bag, putting one out in front of a fate card, and keeping the other hidden. The rest of your party must then guess your hidden number. While it seems easy, it isn’t; for those math fiends out there, that’s only a .14% chance at victory. Fortunately, this is where the rest of the game picks up the slack. At any given point in time, there are four arcana cards, each with a particular mystical name (“The Prophet” or “The Beast”) and with particular rules. When you pull a number from the game bag, you actually pull two: one is put down on one of these arcana. 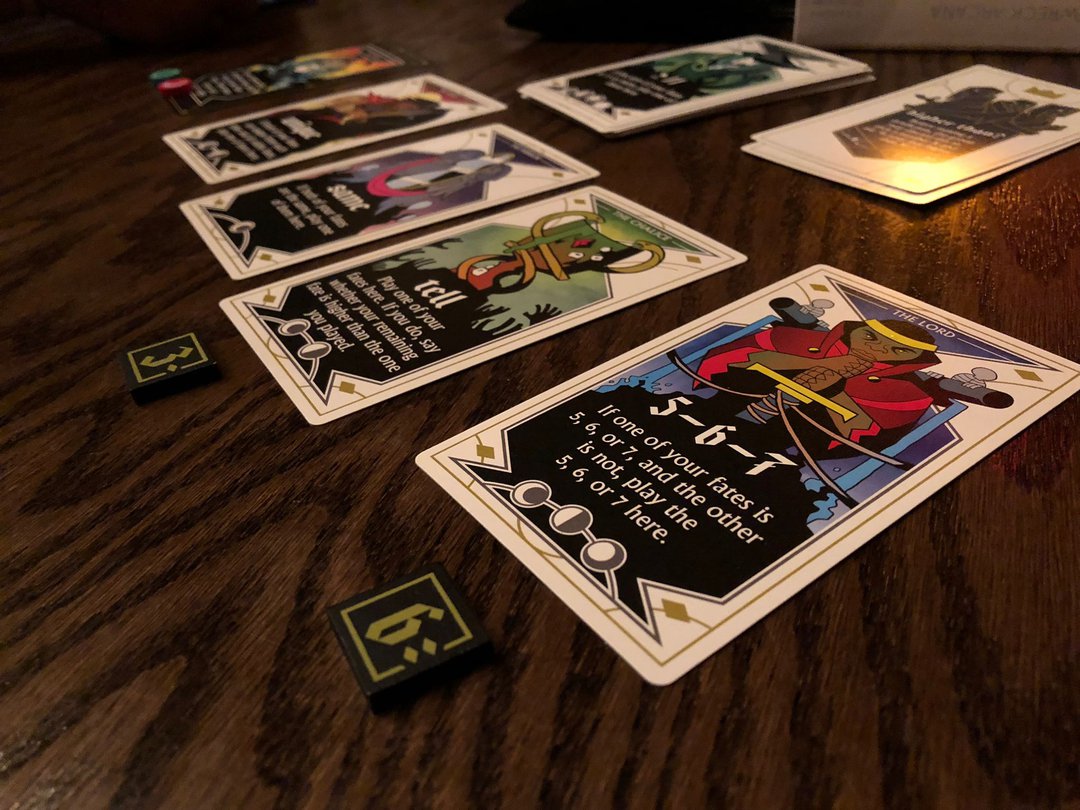 This mechanic of placing fate on arcana cards transforms this game of chance and luck into a logical puzzle. For example, if I draw the ‘The Lord’, I am allowed to place a fate tile that is a 5, 6, or 7 on it. At that point, the rest of the team has a chance to guess. They can deduct that it can’t be 5-7, based on the wording on the card. It’s up to them to now guess with 25% chance of success, wait for next round and another clue, or try and figure out how to narrow it down further, based on other clues on the board.

Of course, the longer you wait to guess, the quicker the fate cards will ‘fade’, being replaced by others… and when a card fades and you don’t guess correctly, your doom track goes up much, much faster

The Good: Unique, Intimidating, and Fun

The Shipwreck Arcana is a game that feels calm and abstract. Not too many pieces, and everyone has their own little set of wooden tiles. Yet, you’ll feel it; the pressure, the anticipation, the intensity. Each round, one of your friends has to go silent as they lay a fate on the table, and the rest of you crowd around, looking for clues. Did Wyatt hope we would guess the number 2 because of what card he used? Or maybe he missed an easy fate, and it’s a different number all together.

Slowly, quietly, the doom tracker - and the success tracker – slowly count upwards towards the winning count of seven. It feels like a rising tide, and your whole team is trying desperately to keep your heads above water, trying not to get crushed. Sometimes, there just won’t be a good move – no easy fate on the table that makes someone go “I know the answer”! Sometimes, you’ll have to accept choosing a number at random, and holding your breath until you know if you were lucky or cursed. 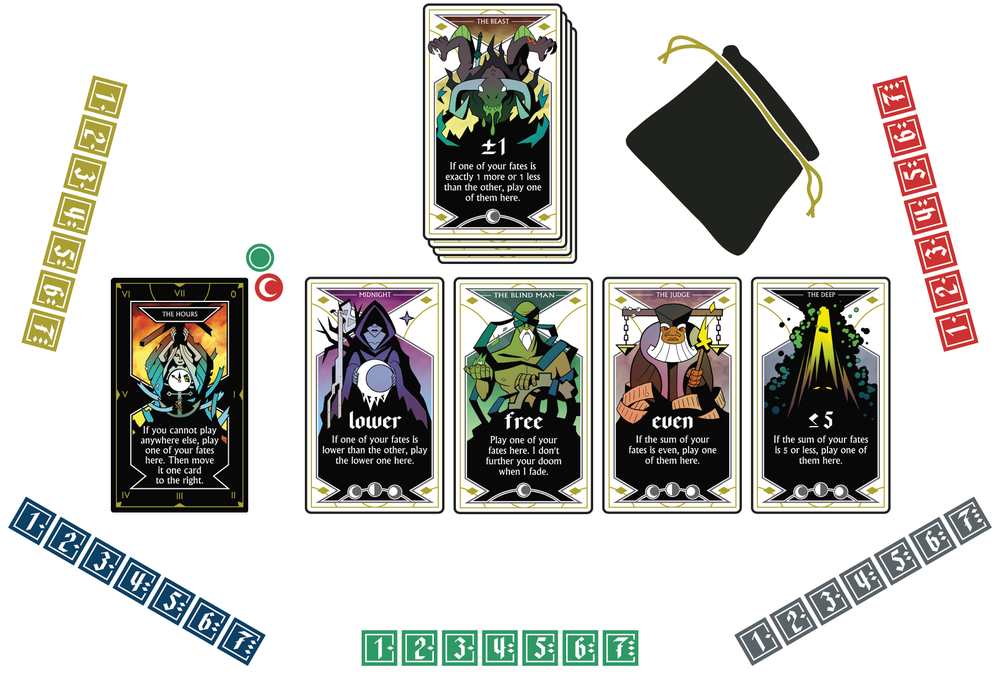 A typical way the game is set up.

This game manages an intensity that is hard to describe until you have a chance to play it yourself. To top it all off, the art is absolutely phenomenal and thematic. The fact that all of this comes for just $16 is incredibly impressive, and firmly makes this a purchase that I feel can be an impulse buy for any board game collector.

The Bad: But Is It Too Weird?

I think The Shipwreck Arcana is a phenomenal game that succeeds partially because of how bizarre it is. It’s different, to the point where playing this at an event will get you a wonderful variety of reactions. However, the upside is also the downside: This is a game that will need some explaining. It will not appeal to everyone, because this is not a game for everyone. It is unique, but the lack of a board or miniatures might make it feel too abstract for some.

One small negative, which is more of a warning about gameplay: your experience will be highly, highly dependent on who you are playing with. A major element of gameplay is that the person who’s fate is being read cannot talk. They cannot give hints, or let out small nervous noises like they do while hiding in horror movies. The Shipwrecked Arcana will end up being as difficult as you let it: using variants, or making sure your team plays as strictly to the rules as possible.

The Shipwreck Arcana Is A Wonderful Game

I love The Shipwreck Arcana. It’s portable, different, inexpensive, and fun. I’ve played this game about a dozen times now, often as a way to end a game night after a few hours of longer games like Lords of Waterdeep or Blood Rage. Of the people I’ve played it with, almost all of them found themselves being pulled in deeper with the tide: the growing stress of trying to discover the right numbers builds tension in a way no one seems to expect. 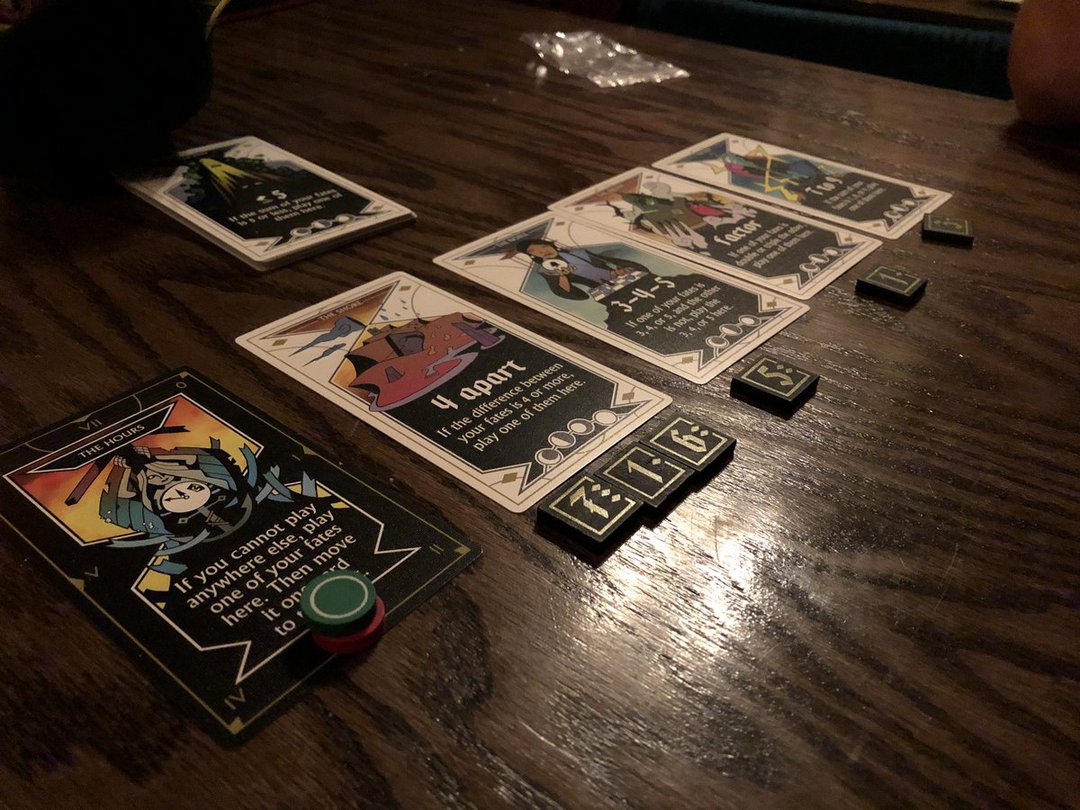 If you are a fan of co-operative games, logic puzzles, or just want something that feels wildly different from your standard economy or territory control, I highly suggest supporting this small game developer and getting a copy.