Undead Labs, the company that made the surprise hit State of Decay, has done a massive 180 and gone straight into making a monster collecting game. That's right, the kind of monster collecting where you find fuzzy animals, tenderly raise them under your care, and slowly become one of the best there ever was. Doesn't it seem a bit out of place for a company that made such a good mature-rated game to turn around and tackle this genre? 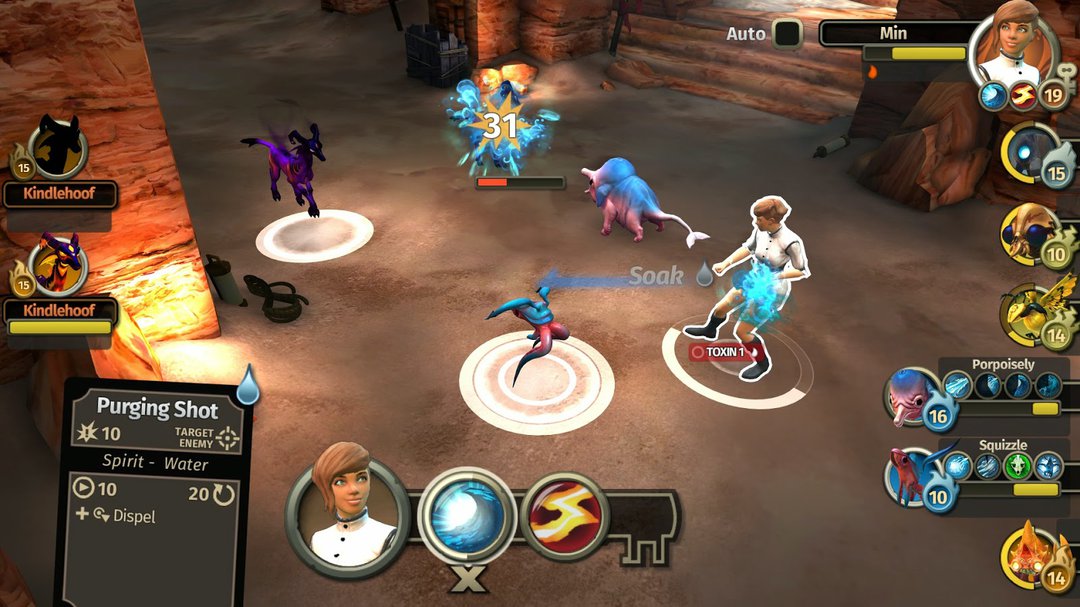 It shouldn't, because this game is onto something big.

The real question is, after you've had a few hours of playing Moonrise to find out how awesome it is, will you care?

Moonrise is a game that has big plans and aspirations, and it needs them: creating any game that deals with monster collecting and battling will inevitably be compared against the giant that is Pokemon. Fortunately, Undead Labs seems up to the challenge, mainly by having a very specific focus for their game-play. They've been revealing the game during this year of PAX conventions, and I was fortunate enough to get an interview with one of the people behind the game. Jamie, one of the programmers, has been working to make sure the combat is as fine tuned and as fun as can be.

"We wanted to make a game where you got to do creature battling against other players, and it was made for that." Jamie excitedly explained, as we got a chance to play through the first few battles of the tutorial and story. "We're fortunate because we're starting a creature battling game from scratch, and so we can build it around what we want. We want this to be competitive and fun to play against others, and people seem to love it." 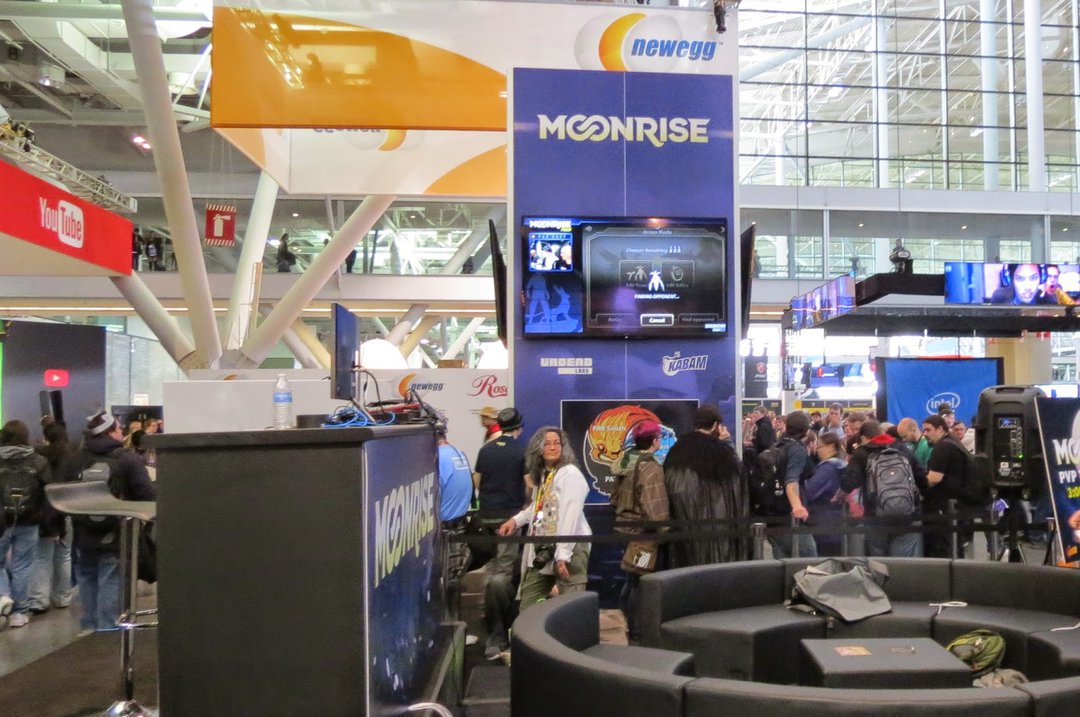 Part of the Undead Labs booth: the desk was for managingthe tournaments they ran every day.

They do. I talked to a few of the people after they played the demo available at PAX East, and the consensus was that all of them were freaking excited that they now had a beta key code for Steam in their hands. Fortunately, we were able to play as well while we were there, and had a chance to go through the start of the game.

First off, the comparison to Pokemon has to be made, simply because that's what's going to happen when you make a game based around monsters as your weapon of choice. Yes, you start by choosing a starter monster - called Solari in the Moonrise universe - and the choices are water, fire, and nature. Immediately after that initial choice though, it becomes obvious that there are some marked differences. The first you experience is that the game isn't turn-based, not really. The best way to describe it is take the ATB system from Final Fantasy 7, then overlay it onto your characters. Your Solari have four attacks to choose from, and each of them are on timers. You choose an attack, and a white ring slowly fills over several seconds around the image of your creature before the attack goes off. 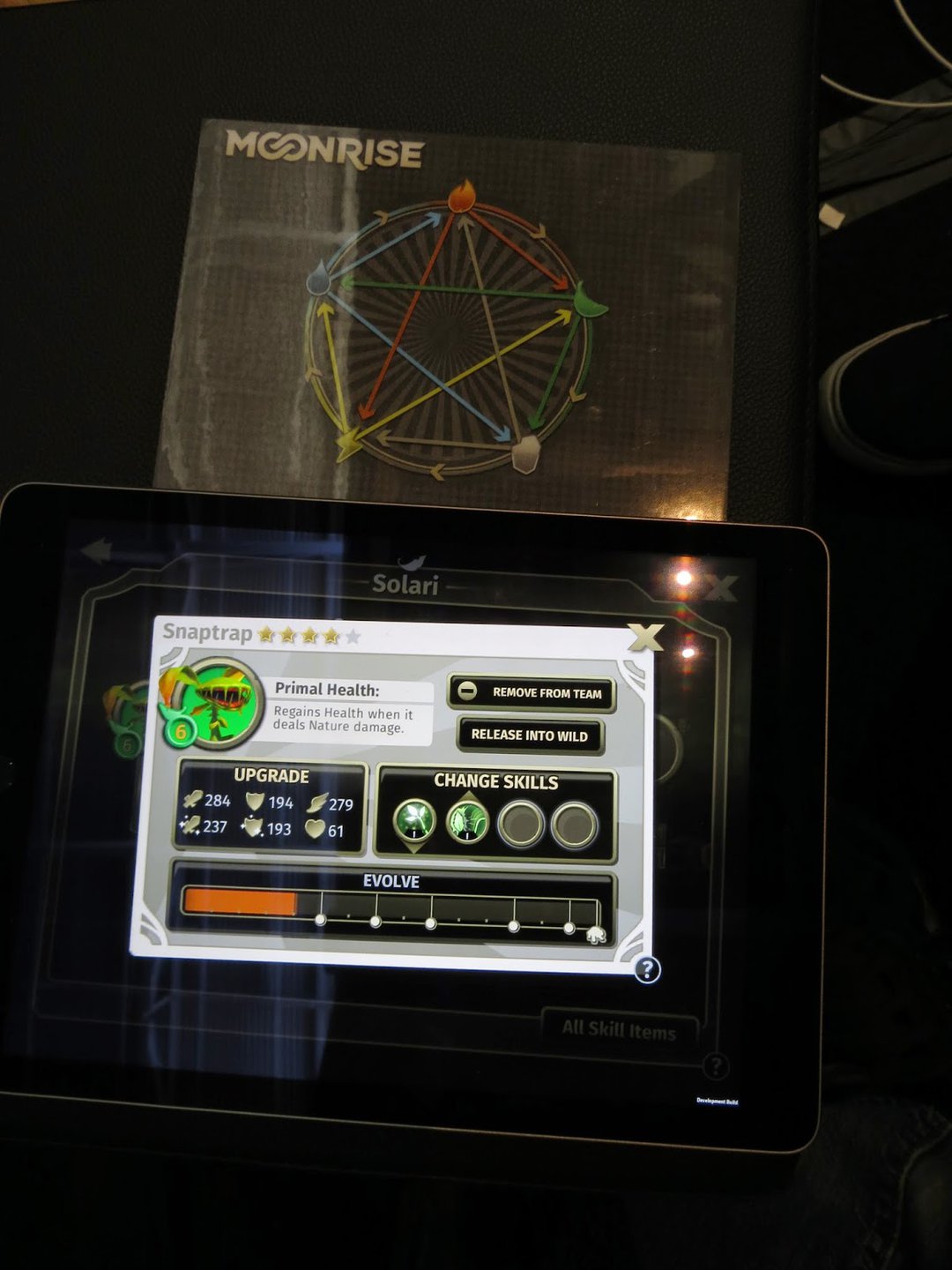 The playable demo we used, along with theelement chart of strengths and weaknesses.

This immediately creates a very interesting space to add complications. Other attacks, either by enemy Solari or by trainers, can cause interrupts, or slows, or stack damage over time effects while you are still prepping an attack. While you are preparing your hard hitting fire Solari to damage everything on the field, your water Solari can be queued up to go right after with a heal spell for your team. Ah, right, that's another huge departure: you have up to two Solari out at a time, and your avatar also attacks, by equipping relics that give him abilities from all over the element chart. This makes the game feel much more hands on.

Player versus player is fun, and intense. There are a lot of fun status effects that were made to allow for defending, attacking, and diminishing your opponents. Arena battles, a feature already in the closed beta, lets you crack open a list of ten level 50 Solari, pick six of them, equip some randomly given relics, and leap into the ring. For every fight you win, your prize pouch grows. After three fights, your draft is over, and you get to see what you've won. 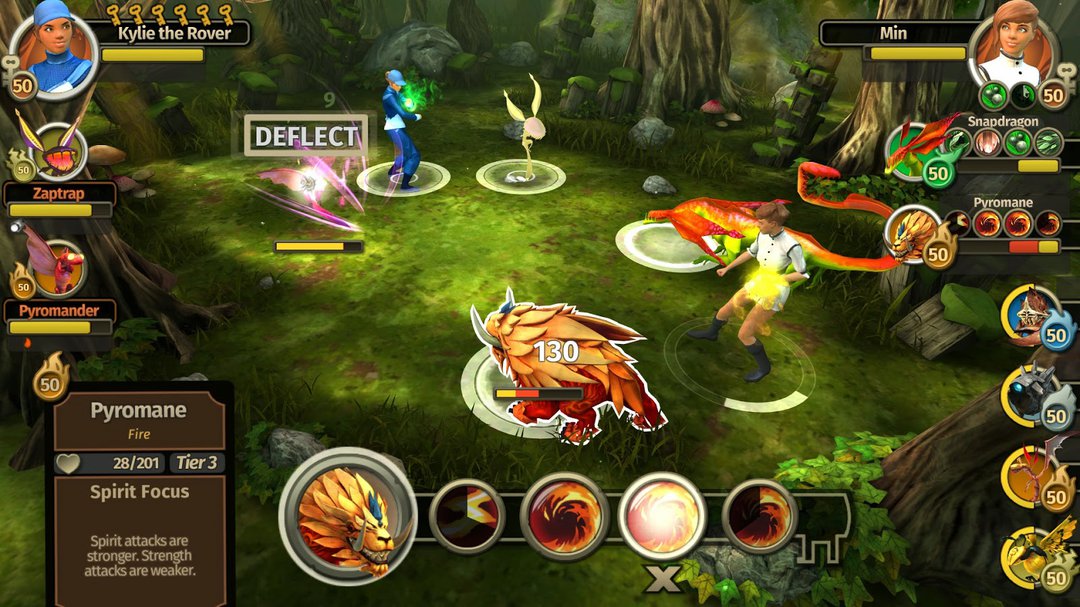 There is a lot happening here. Arena fightsare intense, fast, and fun.

What's cool about the PvP is that you can build multiple ways to win. The classic route is high damage, one-hit KOs on enemy monsters in games that came before this, but that's just not very possible here. Stone type Solari are naturally high armor, but you can build a water type to tank instead, throwing off the enemy's line up. One arena team I had focused on using petrify attacks to render one enemy invulnerable but useless, while I just ganged up on the other poor dude. My favorite line up was based on nature types, inflicting toxins on the enemy trainer directly: poison the guy early, pull out all tanks and just weather the storm while they withered away. Get the enemy trainer, and you never have to even attack the other creatures on the board.

It isn't all just going up against other trainers, don't worry: there is a story, and it's a bit more compelling than suddenly sending pre-teens on a grand dog-fighting journey. Moonrise is named such because the world this game takes place in has a problem; every few years, the astral event called the Moonrise occurs, and it corrupts and twists the normally quiet and reclusive creatures of the world into aggressive, angry hordes. Named Lunari, these shadow-covered beings attack travellers and make the world a much less safe place to be. As a Warden, you've been trained in techniques and skills to defend yourself, train Solari as defenders, and cleanse the strange illness that is on these creatures. 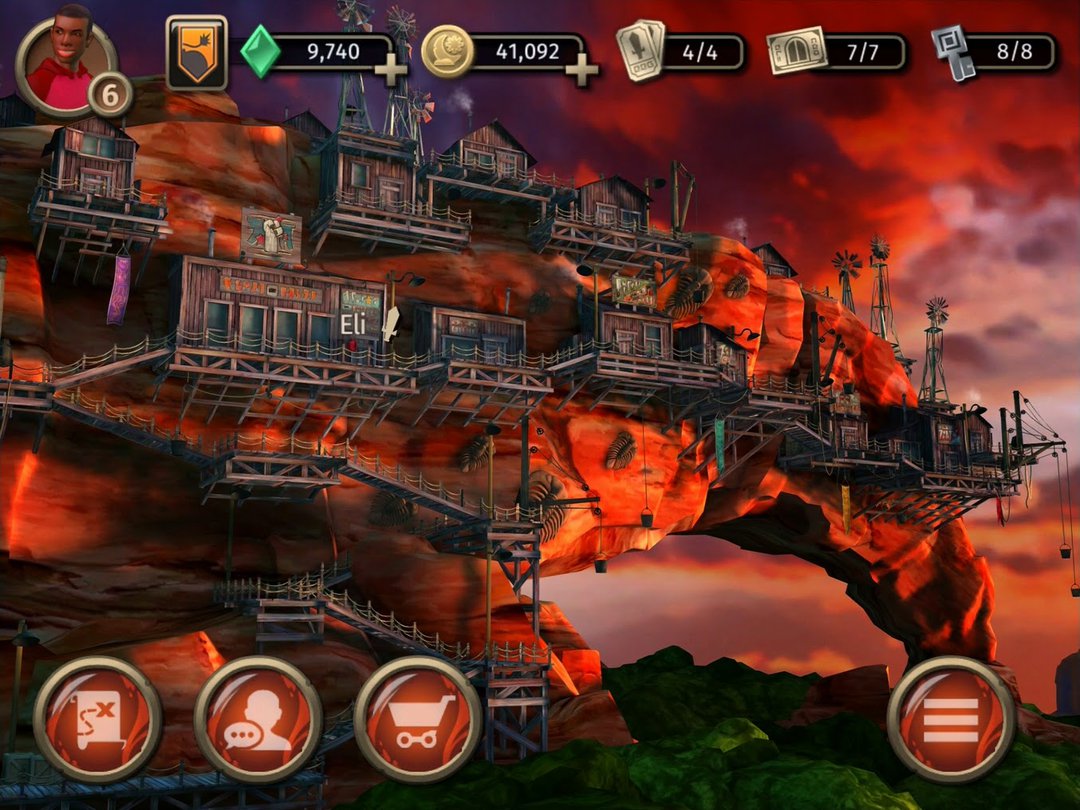 This town, the Qurada Colony, is where the story starts to pick up,and the dungeons begin to become challenging. It's also very pretty.

As you play through the story, another difference reveals itself: every defeated Lunari is someone you can now capture, and put into a Warden Key on your belt. There's no random chance - if you beat it, it can be yours. The trick is Moonrise's star system, where each Solari has a rating of 1-5. The higher, the better base stats, and the quicker it can be to evolve. An interesting thing is since Warden Keys recharge over time, capturing Solari then releasing extras you don't want actually nets you rewards, such as essences which are used to guide the stat-leveling of your creatures. 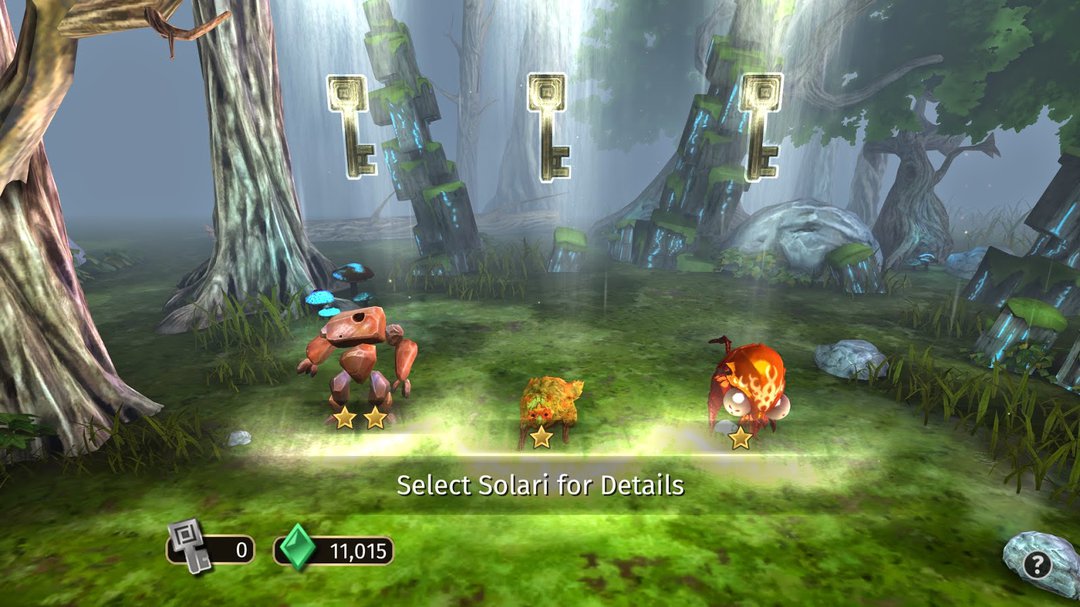 I love the various designs for the creatures in this game.

There's a lot here, and I'm only just getting started. I've played for approximately 10-12 hours in the closed beta, and I'm just now getting to a point where I feel like I'm getting a handle on the game properly. You level up stats by spending essences and coin, while actually using your Solari in combat raises its experience, which raises max health, gives it new skills, and eventually allows for evolution.

Ah, and I should mention that they are complicating that too in Moonrise, to the point where I'm paralyzed with indecision. Do I want to take my high fire-damage Emberjaw and continue to grow him into a real powerhouse? 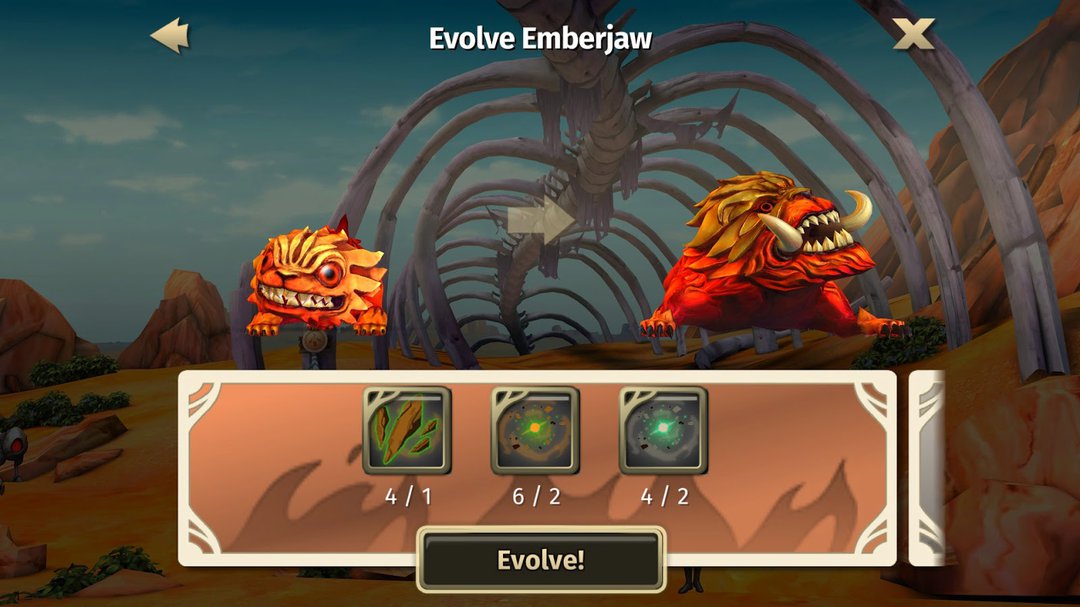 ...Or do I want to take a huge left turn, and morph him into a wall of armored stone that still has plenty of fire attacks? 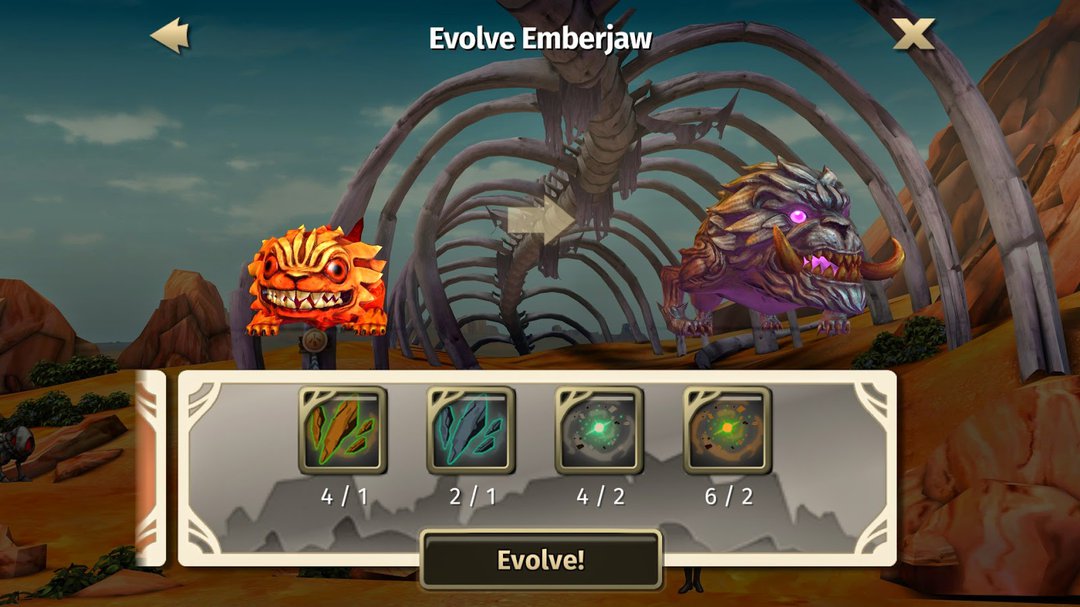 On the other hand, ominous purple-glowing eyes is reallykind of cool.

It's still a system being made, and so there's an exciting element of uncertainty that goes into these choices. Which is going to be the most beneficial? If I'm lucky enough to find a four-star Toddlerock, should I bury it in more armor, or try to make him a decent damage dealer? Should I create a team with a normal tank, or go for all out damage? One of the coolest things about seeing the game at PAX East was seeing it still being created; Jamie and the other designers of the game were taking notes, and running a tournament every day to see how things played out en-masse. They were super excited to reveal just that same week that Moonrise is going to be a Mac and Steam game as well, and completely cross-platform compatible when done. "We don't want people to think this is just a small mobile game" Jamie assured. "We want people to know there's a lot of game-play here."

Let me be honest: this game isn't done yet. There's some polishing that still needs to be done with the quest line, the balance, and with how often certain enemies spawn. This is going to be a free-to-play game, and they are still figuring out what's offered at the in-game store as options. Their model is meant to let you acquire all the resources you need without spending money, and that is certainly the case: just by releasing Solari and finishing dungeons, I was able to get all the various currencies that are available in the beta. As they add in more vanity items for costuming, Undead Labs wants Moonrise to be a game you can spend money on to perhaps speed up some training or unlock content faster, but you still need to play with the Solari in your party to strengthen and improve at the game.

There's still work to do, and there's not yet any particular release date on the horizon, but there's enough to say this: if you've been looking for a game that will make the monster battling genre evolve to the next level? This is going to be it.

See you in the arena. Please, be nice to me.