A Great Introduction to Management Board Games 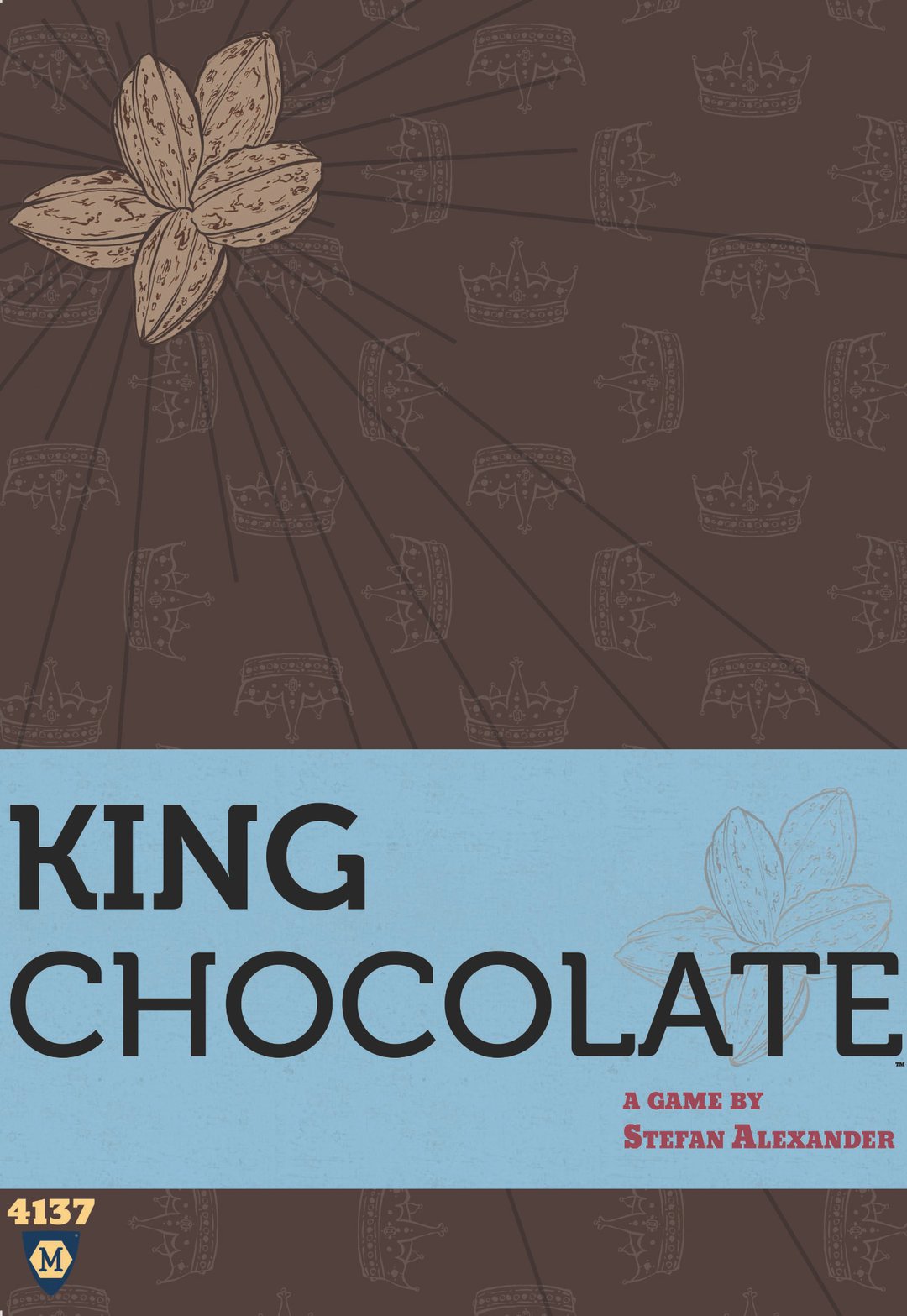 I'm a big fan of board games that let you and your friends craft the board during play. Games like Archipelago, the old Labyrinth game, and Xia all tickle that proverbial pickle. Seeing a constantly expanding semi-random field of play puts a lot of pressure of the players to keep their strategies flexible and rewards participants who know when to bail out of struggling sectors for more profitable climes.

This is where Mayfair's new game, King Chocolate, shines. The board grows as the players build a map of chocolate's production line, from bean to bar, always trying to make more money than those around them. It's simple, yet flexible, and is the core behind a solid board game design. 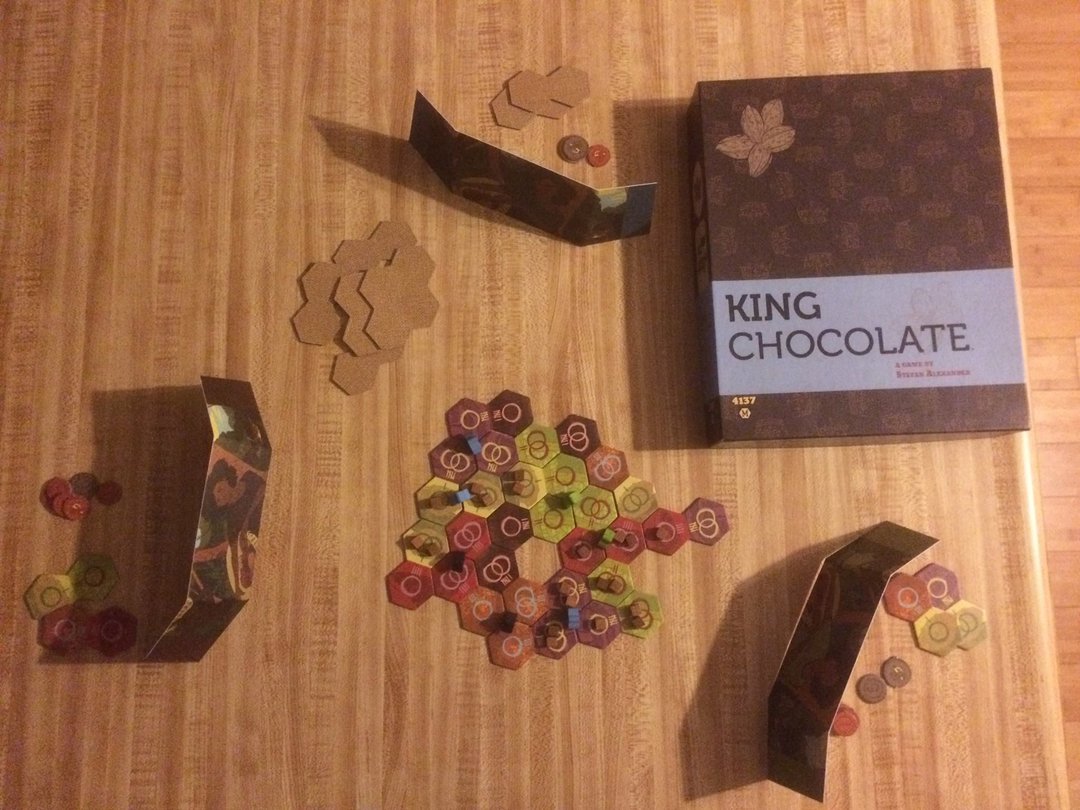 The layout of the board, which grows as you add more tiles. The little player screens are a great touch, since they have all the rules you need to play on their backs.

Mayfair's King Chocolate boils down a lot of the complex mechanics found in heavier games to produce a simple, fast paced experience that is ideal for non-board game grognards. If you have friends, parents, or young cousins that may have been intimidated by Twilight Imperium's deluge of plastic bits or been burned by Monopoly's cutthroat randomness (who hasn't?), King Chocolate is great for them to springboard into the hobby. The rules are simple, taking up the back of an included screen for each player, with only three steps per turn. Each turn goes by quickly, and there are lots of interactions so even the most impatient of players shouldn't get bored or distracted while they wait to go. The board is colorful and visually well designed to minimize confusion.

The concept of King Chocolate is to make money by controlling the line of production during the 6 step chocolate-making process. The board consists of a ring of hexes with 6 different colors. Each turn, players have to place a two hex tile on the board. Contiguous colors can be claimed by one player. However, each player can only control a max of 4 steps in the chain, so you have to interact with your opponents at some point to make sure that production flows smoothly. The larger you make your single step blob, the more capacity you have to pull in chocolate from a previous step. However, your opponents could drop tiles to block your expansion and shatter your plans. During a turn, the active player can push chocolate through the production steps from one step to the next higher one. If your chocolate is being bought by anyone, you get paid. It's possible to push your own chocolate through four sequential steps and get paid four times for each unit of chocolate, but at some point you need to unload it onto tiles that you don't own, or else you'll get backed up. 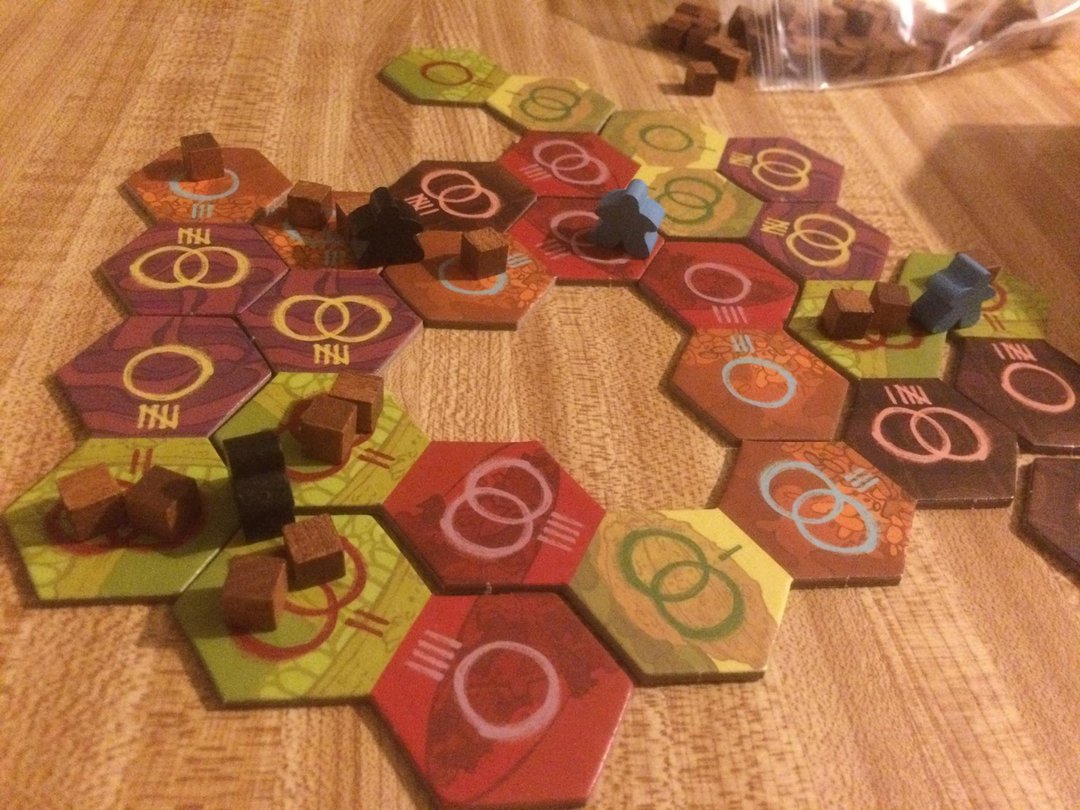 It's here that the game really has a lot of fun. You only have four wooden markers for workers to control sections of tile, but chocolate making is a 6-step process here. You can try and force chocolate through unowned sections of tile, but that typically can mean you are producing less chocolate than you could through larger, opponent-owned land. You could try to monopolize some steps with large fields, but go too far, and other players might avoid pushing chocolate anywhere close to your own locations. It's cool to engineer the situation so that you force your opponents to spend actions buying your chocolate and giving you money, all to try and supply their own money machines on later turns. There's a fair deal of psychology involved at moments like this, but never anything truly cut-throat or overwhelming. 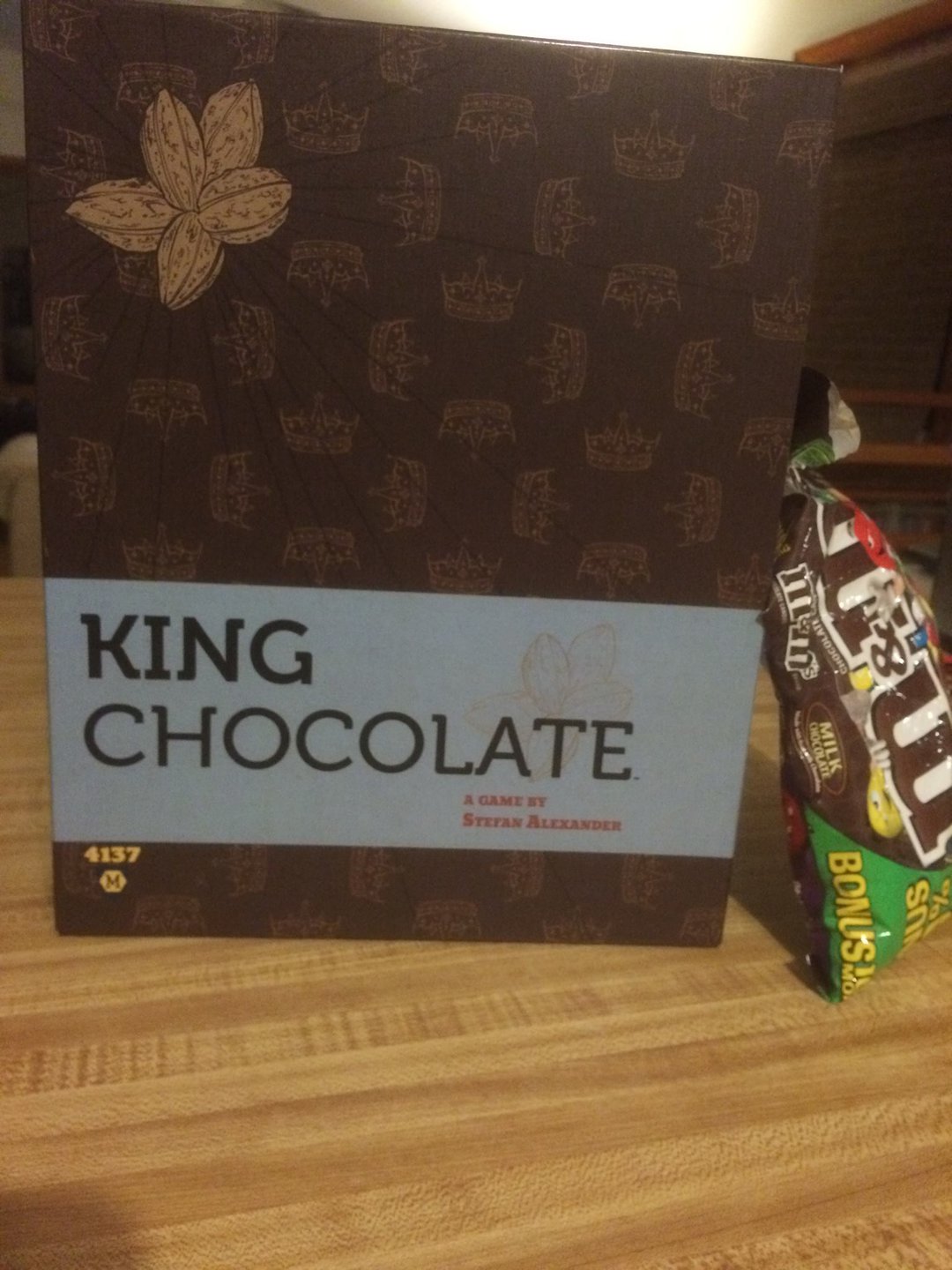 Pictured with a bag of M&M's. For scale.

I don't feel that the game has a ton of depth in it, but that's not what it's trying to do. King Chocolate is a step above a beer-and-pretzels game (think even simpler rules with three times the trash talk), because there is a degree of planning and adaptation needed to excel. It's cleverly made to make the complexity be on how difficult you and your friends make the board for each other, while still being easy to understand. Overall, it strikes me as a solid introductory game for those who are interested in playing board games but don't have an entire day to devote to some of the heavier titles out there. Once you play it once, it can be a quick, fun game, to open up a night with friends, or close it out as time winds down. Give it a shot, and try and be a kingpin of everyone's favorite snack.

Have you played King Chocolate before, and liked it? Do you want to claim that you are better at monopolizing the chocolate industry than I am? Let me know in the comments! Want more board game reviews? Head over to our Facebook, or follow us on Twitter.