A Night With Fury Of Dracula

A tour of Europe in a box!  Shame you won't be sightseeing under better circumstances... 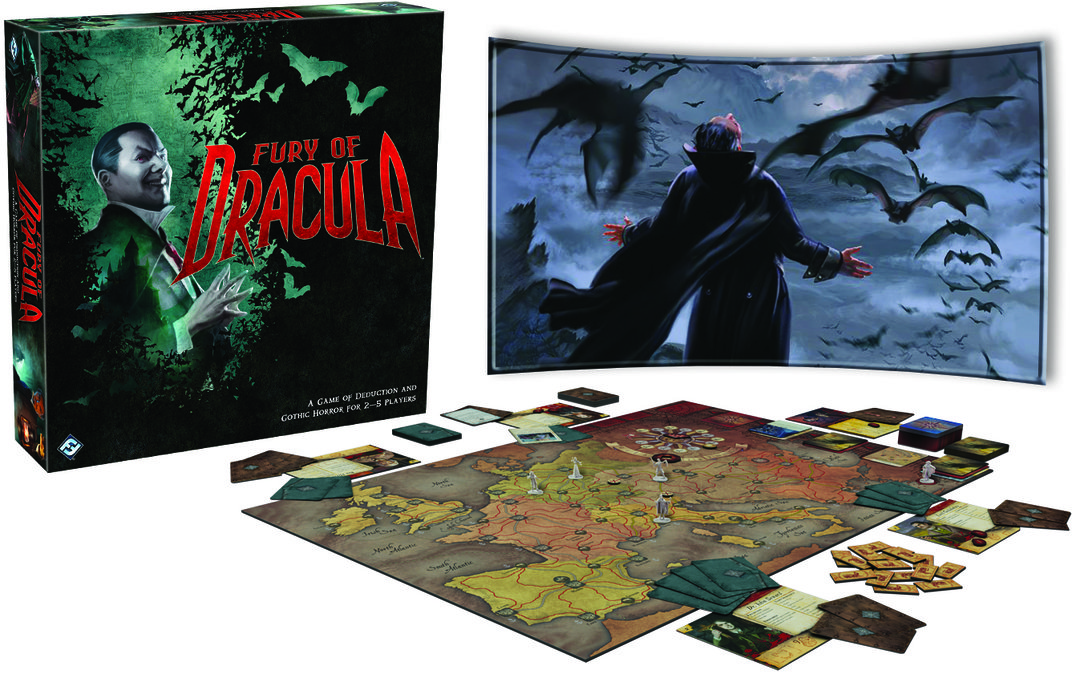 The letter arrived only yesterday, but already your preparations to depart are complete. South across the continent you'll travel, sweeping each city and town you ride through on your way to Marseilles. Your friends, spread across Europe, will be doing the same as you all keep in contact via missives. The Count has returned. He's hiding somewhere, biding his time, spreading his evil influence across the land. And time is of the utmost. You must find Dracula and end his unlife before it's too late.

Fury of Dracula is a hidden movement game in which up to four players take the rolls of hunters, crossing Europe in a desperate search for the infamous vampire lord, Dracula. To succeed, they'll need to work together to close a net around him, corner the fiend, and finally defeat him in combat. As with most hidden movement games, the Dracula player will keep his figure off the board (tracking his movement secretly until sussed out), but unlike other hidden movement games this isn't just a simple cat and mouse ordeal. At any time, Dracula might go on the offensive, and the hunters may suddenly become the hunted. The stakes in this deadly game of hide and seek may just be the highest of any hidden movement game ever published. It's worth a look, brave hunter, if you've the stomach for it.

Weary from several days of travel, you arrive finally in Marseilles. Though in your travels you have acquired several helpful tools that will aid you when you find the Count, you have yet to come across the path of darkness he's been leaving in his wake. By now, half a week has passed and the Count's plans are already in motion. The sun sets as you come upon your destination, and an unnatural fog settles over the port city. It continues to grow until searching becomes impossible. Boats refuse to set sail, and you become lost even wandering the streets. There's no leaving the city until the fog clears. And yet, you can feel the clawed hands of your quarry stirring this mire. He's been here.

A game of Fury of Dracula begins with the hunter players starting anywhere on the board they wish. During the day, they're free to move about the board, acquire useful items and events, reserve train tickets for future movement bonuses, and trade with each other if they're occupying the same city. At night, when Dracula becomes more active, they can repeat any of these actions save for movement. Most players will opt to start spreading out, covering as much ground as possible until finding Dracula's path and closing in on him, but this strategy is also more dangerous. Before they get their hands on holy artifacts, allies, and even guns, hunters are juicy targets for their vampire prey to descend upon.

Dracula starts in much a similar way, on any space he wishes...but he doesn't place his piece on the board. Instead, tracks his movement through a series of facedown cards that he leaves in a “trail” across the side of the board. Should a hunter stumble onto a location in that path, the Dracula player flips it up. If Dracula currently occupies that space, he also places his figure back onto the board. It's up to Dracula if he wants to start far off in a corner of the map or in a space adjacent to an unsuspecting target. He gains points needed for his victory if he can create, hide, and mature vampires who remain undiscovered for several turns, but he can also win by beating the hunters in combat. The hunters win if Dracula is killed, though that's a tall order in the first couple turns. How then you choose to start a game of Fury of Dracula, whether you're a hunter or the Count, is completely of your own choosing. Choose wisely.

Each brave hunter commands unique powers, and you'll need each one to bring down Dracula.

Waylaid by the fog, you settle in for a day a of waiting. The streets are a labyrinth within the dense clouds, and even were Dracula to be still in the city you would never manage to locate him. Sitting at a writing desk in your room, you finish penning several letters to send to your friends. Now that you've located the trail, they need to come as soon as possible and aid in your search. A draft crosses your neck in icy pinpricks. The window behind you has come open. You retrieve a pistol from next to the desk and pull a crucifix from your pocket. One can never be too safe. You move quickly across the room and close the window without incident. A sigh of relief stops in your throat as you turn back to your desk to see a familiar cloaked figure, fingers steepled and a bloody grin across his lips. In an instant the grin is gone, fangs bared, and he is upon you!

If you thought chasing Dracula across Europe was a fun game of deception and deduction in itself, you're in for a ride when combat starts. Fights in Fury of Dracula are like a dance between hunter and vampire, each player choosing one card from their hand of possibilities to carefully choreograph against the opponent. For the hunter, these cards include any items obtained and a basic punch, dodge and evade card. They play each card knowing they will remain on the table for a full turn, ensuring the same action cannot be used in two consecutive rounds. For Dracula, the combat hand is always five random cards from his combat deck, having him make due with whatever is drawn. When then is a good time to hold up your garlic? When do you fire those special silver bullets you've been hoarding? And as Dracula, when do you move in for the critical bite attack, potentially ending combat regardless of the Hunter's remaining health? Certain items are spent after use, making their timing even more critical. And of course, are you doing the hunting or are you the weaker party?

All of these factors will influence whether your fight or flight response kicks in... or whether or not you want to look certain death in the face and laugh. During my last game, Dracula assaulted a Hunter on the third turn, who was alone and armed with only bare fists. Convinced of his supremacy he pressed his attack each turn, only to be outfoxed, out-dodged, and punched in the jaw repeatedly. We will tell stories of that defenseless-woman-turned-bare-knuckle-boxing-champ for as long as we continue to play this game. 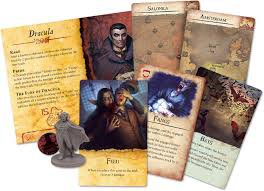 The monster himself, resplendent in all his dark glory.

The fight has left the furniture in the room upturned and disheveled. Things were going in your favor until, pressing your attack, you brought your pistol to bear. Seizing the opportunity, your quarry had evaporated into a dark mist, and before you could bring up your holy symbol, he had fled. You fling the door to your room open and call to the innkeeper to ready your horse immediately.

You barely have time to pull your belongings together and instruct the landlord to post your letters before riding off. The chase is on!

This game of pursuer and pursued will continue until either Dracula is dead at the hunters' feet, or Europe has fallen to darkness. A timer that tracks the days and weeks that pass in-game ensures that the game doesn't overstay its welcome, generating automatic points for Dracula should the game press on too long. The pressure, then, is on to find him as soon as humanly possible and press after him relentlessly as long as your health will allow. A host of special power cards ensure Dracula is never left without a trick to balance him against being outnumbered, and both players can play special event cards, further adding spice to an already flavorful game. Some of Dracula's location cards also have different backs, for example differing by land or sea, and immediately indicating on his “trail” he's been through a port if he flees by water. Or in fact, if he's gone to Castle Dracula to heal. For what first appears to be a straightforward game of chase-or-be-chased, this is a box that contains so many possibilities that it threatens to burst like a cave of bats spilling out into the inky night.

Try to resist being overly giddy when it's your turn to be Dracula, I dare you.

You'll “get” this game in your first few turns of play, but it will continue to surprise you each time you break it out anew. Fresh strategies will present themselves in startling variety as you grow more accustomed to the rules and cards. Sure you can use Unnatural Fog to close off your path and buy you breathing room when you're on the run, but I was shocked when our Dracula player used it to cover his ambush of another hunter, waltzing in for a fight and back out in relative safety. Similarly, when I last played as Dracula I fell in love with the Wolf Form power, allowing me to fast travel two cities in one move and escape my pursuers. But in our last game, our clever Dracula player noted the card read “you may travel up totwo spaces” and used our miscalculation of his moves to slip right through our fingers (he moved only one space and then hid, allowing us to pass right over him). It's no exaggeration to say either side may go from hearty laughter one turn to sweating bullets for the next three as the tables turn. There are so many ways that, for what appears to be a black and white fight/flee decision game, you can mix up play to suit your personal style. It's so rare to find a game that says, “Play how you want, and have fun as you like,” all the while dripping with theme like the bloody fangs that hide within its box.

This is one game I cannot recommend highly enough. The clincher for my recommendation comes from this final thought I'll leave you with: In every game I've played, no matter who I've taught (including people I'm just meeting for the first time and people who don't play lots of games like this), every single person that has played Fury of Dracula has talked about it excitedly after it ended. What did you do when we lost you over here? You really had us sweating when you attacked that turn. I had set an ambush for you here when you suddenly went off this other way. And all of them say they can't wait to play it again.

Have you played Fury of Dracula before, and want to share your favorite moments? Leave us a comment, or visit our Facebook to see all the other board game reviews that we've done. Feel free to stalk us on Twitter too, just to make sure we aren't nefarious vampires here in America.