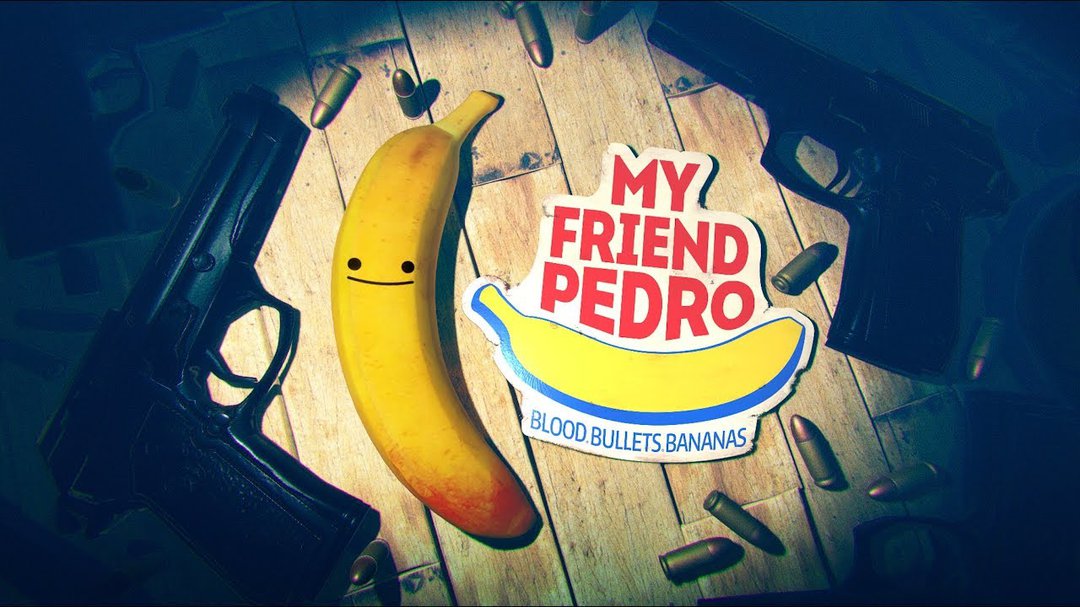 There’s a group of games, a very selective group, that seem to have been made for just one purpose; to make you feel like the star of an action movie. My Friend Pedro, the irreverent shoot-em-up from the team at DeadToast Entertainment is the latest member of that group. With its outrageous and sometimes quirky shooting mechanics, like shooting someone while you’re doing a flip on a skateboard, you’ll keep coming back. And while the story and writing may leave something to be desired, the experience that My Friend Pedro delivers doesn’t suffer for it.

In My Friend Pedro you take on the role of a masked amnesiac fighting to collapse criminal empires, from one that makes canned meat out of people to the internet. Along the way, you’re guided by who else than your friend Pedro. He’s your only friend in this huge unknown world, and he just happens to be a floating sentient banana who lives in your mind. Although he doesn’t have limbs to hold guns with, he does his best to guide your character through this mad world of never-ending sewers, retirement villages for mobsters and whatever the place he calls home is. 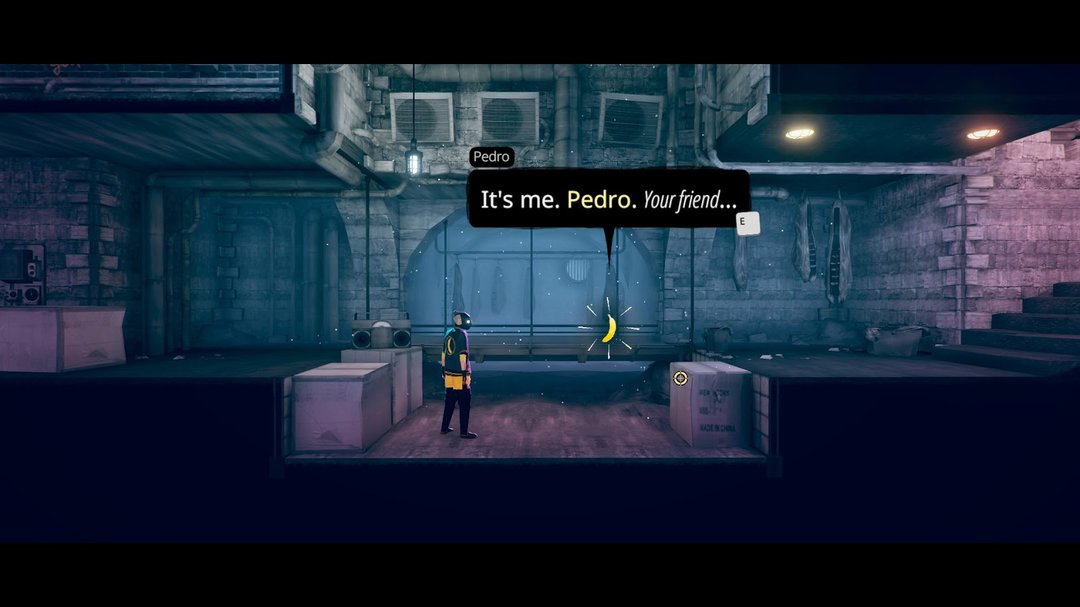 Don't let those italics fool you. Pedro is a great friend!

Most often, the only eye-popping thing on the screen is your character, who dances and twists around bullets while firing off his own. Beyond him are bland enemies and same-y backgrounds, with the exception of one level that looks more like an acid trip. This standout marks the halfpoint of the game, and serves as a nice pink-hewn break from the otherwise grey color palette that the majority of the game conforms to.

Of course I have to mention the game’s writing, which is mediocre bordering on groan-worthy. Like many other games published by Devolver Digital, My Friend Pedro has a very tongue-in-cheek style of humor. Mobsters are butchering people and selling it as mystery meat, the internet is basically run as a Cyberpunk megacorp with its own paramilitary and of course, the most hardcore of gamers have retreated into the sewers where they have gone feral. But more often than not, jokes fall flat. The game’s story follows suit, and though it ends in a twist you can probably guess what it is. That being said, the bit about hardcore gamers was pretty funny. 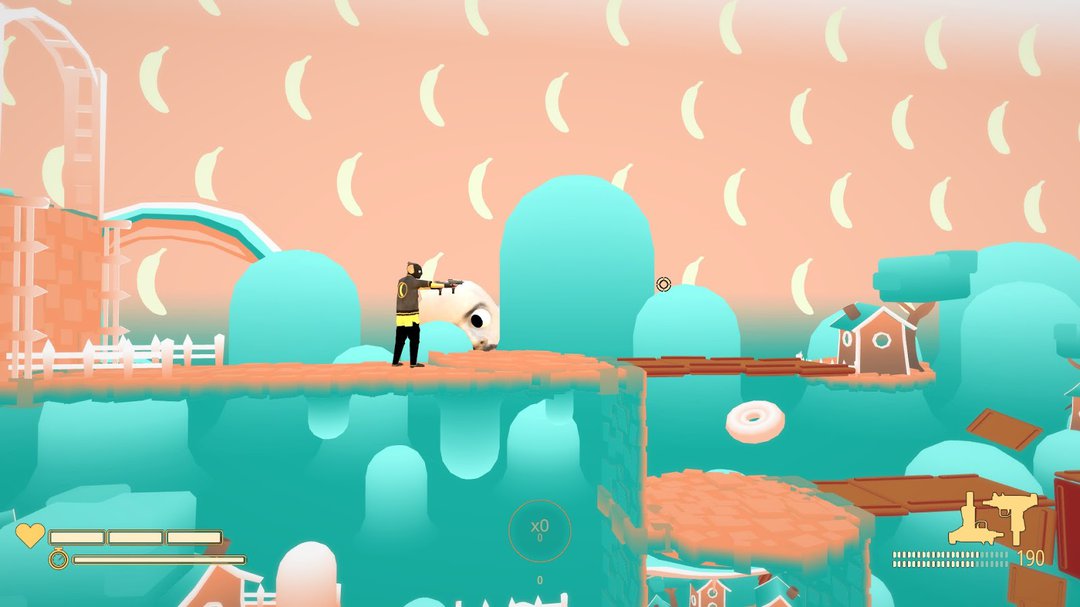 Of course the real focus of My Friend Pedro isn’t its world or writing, it’s in the game’s non-stop action. Like many other shoot-em-ups before it, My Friend Pedro is fueled by its momentum; you shoot one set of enemies and move right on to the next with no stops in between. This might remind you of some other more popular shooters that have the same feel, like DOOM (2016), but My Friend Pedro serves this mechanic up in a unique way. Instead of leaping from one demon to another, ripping and tearing, this shooter’s best moments come when you slow down time as you crash through a window on a zipline, shooting one enemies head off and then kicking it at another to kill them. Or when you dodge spin with enemies on both sides of you and spray your dual machine pistols like a murderous ballerina.

Not only does the game give you multiple opportunities to channel your inner John Wick, it rewards your for it. At the end of every level you get a rating based on how many points you got, which you earn by killing enemies quickly, creatively and without getting hit. The faster you go and the less you get hit, the higher your point multiplier goes, and the more creative your kills the more points you get. See where I’m going with this? Simply, it pays off to kick a pan into the air then shoot it, ricocheting bullets off and into enemies. Oh and you’re doing a spin the whole time of course.

I'll say it one more time: My Friend Pedro is stylish as heck!

Once I beat the game however, I had little to no desire to hop back in and play through the whole game again. The game is fantastic while it lasts - I beat it in a mere five hours - but past getting a higher score, there isn’t much to come back to My Friend Pedro for. Maybe further in the future I’ll want to play it again, but that won’t be any time soon. This is one of those titles that would benefit immensely from an arcade or endless mode.

My Friend Pedro is a non-stop action packed shooter that thrives off of your character being an unstoppable force going up against plenty of movable objects. So when puzzles start showing up that force you to stop, it’s like finding a hair in your soup. Puzzles in the game are simplistic, having you stand on a plate to lift up a gate or press switches to open up a clear path forward. They may serve as breaks from the adrenaline rush of each level, but when they become more common puzzles simply kill your combo meter and have you wait to keep running through a level. 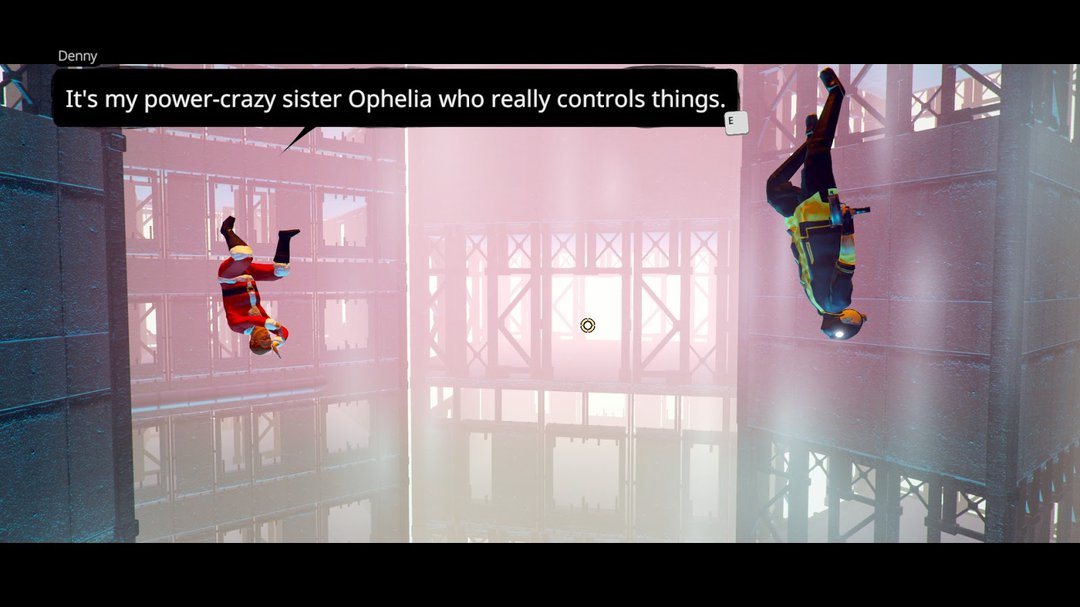 More unconventional levels have you falling or riding a motorcycle, a nice change of pace.

My Friend Pedro hits every point that a fast paced shoot-em-up should. It’s stylish, outlandish and fully exciting, and there’s not much in the game that says otherwise. I’m not going to launch into another anecdote that has to do with shooting tons of baddies, instead check the gif above if you skipped past it (or check it again) and be amazed. DeadToast studios has proven that they know how to make an exciting shooter, quite a challenge for a genre that spans decades and hundreds of distinctive series. I can’t wait to see what they come out with next and urge anyone reading to dive head-first into My Friend Pedro.