The Sutble Art Of Giving Flowers For Victory Points

What do you get when you mix a publisher known for releasing deep but easily accessible wallet games, each a mere 18 cards, with the designer of the recent hit, Wingspan (and artwork by the awesome Beth Sobel)? It’s Tussie-Mussie, a game based on the Victorian fad of flower giving and the meanings ascribed to them, now on Kickstarter! As the question ever remains when I talk about a Button Shy title, I’ll get my conclusion out of the way and say that, yes, this game continues in the trend of easy to learn games that play quickly and enjoyably. The real question here is if this game is one that would suit your family or gaming group. 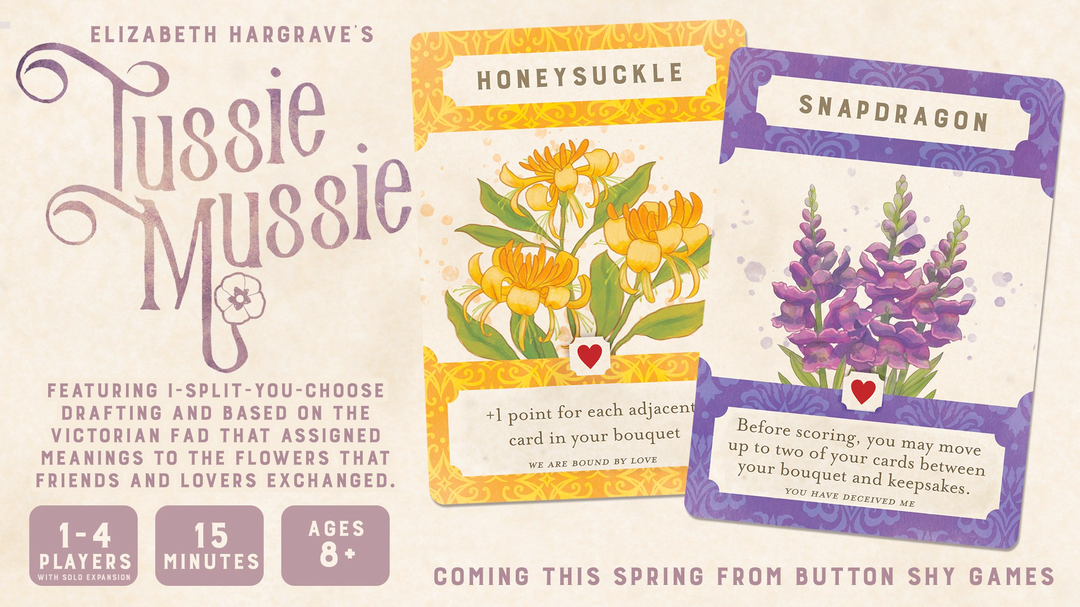 Ah, Button Shy games! Where the playtime advertised is the game time you get!

The Cutthroat Hobby Of Gifting Flowers

Tussie-Mussie at its heart is two games. One, the game you’ll probably notice first, is a game of set collection. Each player will take it in turn to draw the top two cards of the deck, placing one face up and one face down for the player to their left to pick from; they get one card, and the active player gets the other. Once around the table and once back, and everyone’s collected a set of four cards. Everyone then scores based on the sets they’ve collected, and after three rounds the player with the highest score wins. There’s also a spatial element with cards being ordered left to right as you take them, sometimes scoring based on adjacent cards, and sometimes scoring on whether they were face up (bouquet) or face down (keepsakes). At first, this game looks as many Button Shy titles do: simple and familiar, almost to a fault. But let’s kick it up a notch and look at that second game-within-a-game that I mentioned before.

That second game I’m referring to is a total mind game of bluffs and double bluffs. You’ll quickly realize that, while the objective of the game is to collect complementary sets of cards, you will never get to choose the card you get to keep when it’s your turn to draw and see both choices. If you see a card you really want, it’s up to you to decide whether that card goes face up on the table or face down; does the other player get to marvel at it as well or do you try and hide it? How well do you think you know what they’re more interested in? Or do you offer them something seemingly good just so they’ll leave that face down card alone? Or do you put your desired card face up and hide it in plain sight, knowing your friend will mess with what they think is hidden? If you think things get any easier when it’s finally your turn to pick, trust me when I say it doesn't.

Combos, the heart of any good card game. The cards here allow you to hone in like a laser or pivot cleverly if you're so inclined.

This one was a hit at the start of our local game night. Once everyone got the hang of the hiding/choosing mechanics, rounds were five minutes if that. We finished whole games in 10 to 15 minutes, allowing new arrivals to game night who’d been watching to sit in as people rotated around for other games. While each card is unique among the set, after just a couple of games you’ll have seen pretty much every card and start to get a feel for what could be left in the deck based on what you’re seeing face up on the table. Certain cards incentivize you to take things that are face up or face down, or collect sets of colors, or take completely different things. Having one of these cards face down in your collection can be a powerful scoring swing, but having one face up is no less useful. Sometimes you can divert your friends’ attention away from your true goals, pivoting in secret to score in ways they didn’t think were possible. It’s a very satisfying feeling to mislead someone into putting an obvious appeasement card face up in front of you, watching their face sink as you confidently swipe the face down card they clearly wanted.

Herein lies perhaps my one criticism of the game. What makes this game special and exciting is the same thing that keeps me from thinking this will be a game I play with the same people over and over. That bluffing element where you read your opponents and carefully select which card will be face up and which will hide face down, that kind of thing gets a little old if you’re constantly facing the same opponents. To be fair, it’s the same type of thing that happens if you have a group that plays games like The Resistance a ton. I think this game will continue to shine at our local game nights because new players can rotate in regularly, keeping things fresh and unpredictable. And if your group is the kind to play social deduction style games over and over, still loving them and developing a meta within your meta despite repeated plays, you may not honestly care about this criticism. 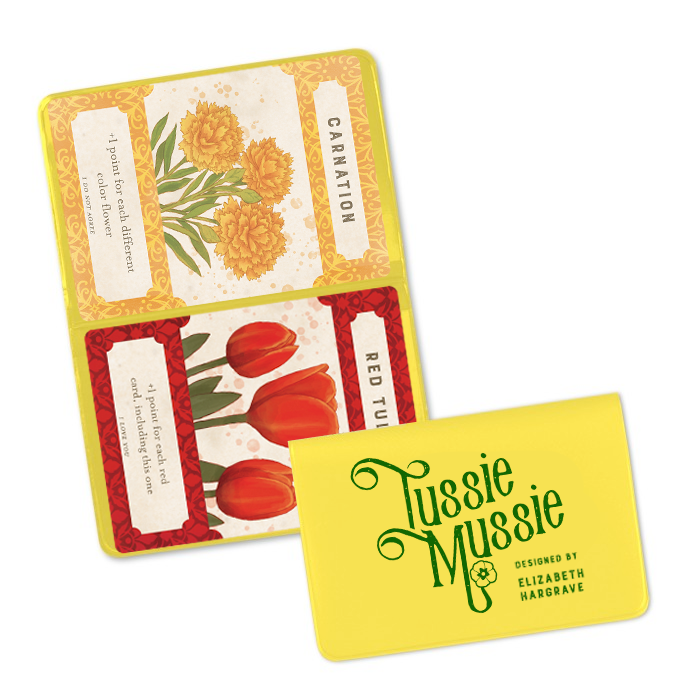 All in all, I think Tussie-Mussie makes either a great addition to the Button Shy section of your game shelf or a great launching point to start one. When I first started buying Button Shy products I thought I’d just pick up a couple small games, easy things to toss in a game night or travel bag. I continue to be amazed at just how different each new design they offer really is, and I’m now well on my way to owning a dozen of their different titles. Tussie-Mussie continues in that trend of quality publishing, so if it sounds like a game you would enjoy, I strongly encourage you to check out their Kickstarter (link back at the top of the article). There is also a solo mode that will be included, though the rules weren't provided at the time of this preview, if that helps to sway you one way or the other. I’ll end as I usually do for Button Shy’s stuff, and that is to say that if you’re still not sure, for $10 you really can’t go wrong giving this one a try.