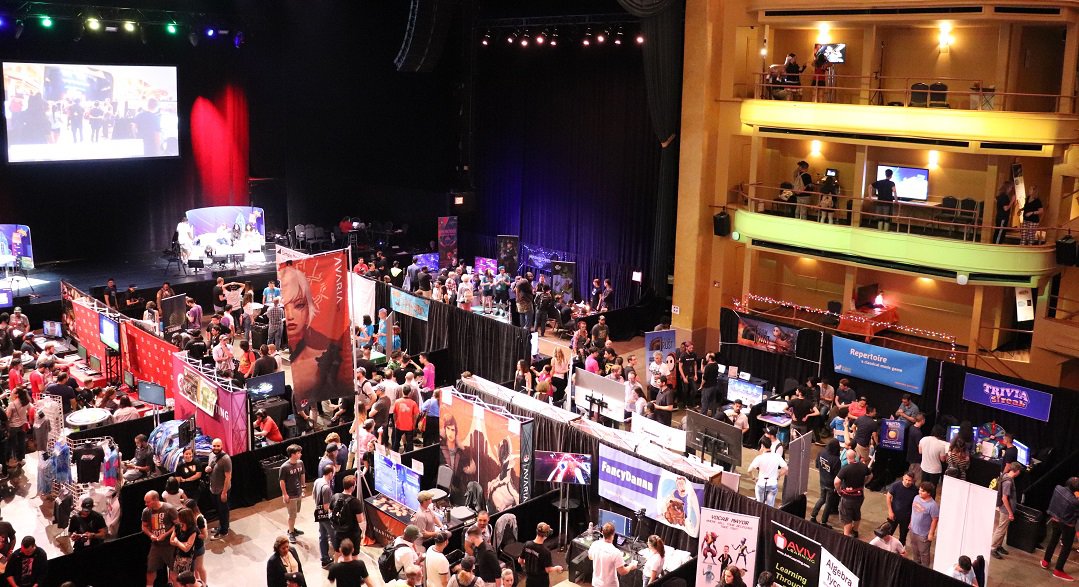 Last weekend, four of us had the chance to head down to New York City for Play NYC. This was its second year in existence, and so we were excited to see how the convention had evolved. It was being held in a larger venue, with more studio support, and even more games than last year, numbering over 140. We were excited to be on our way... well, except for the weather. 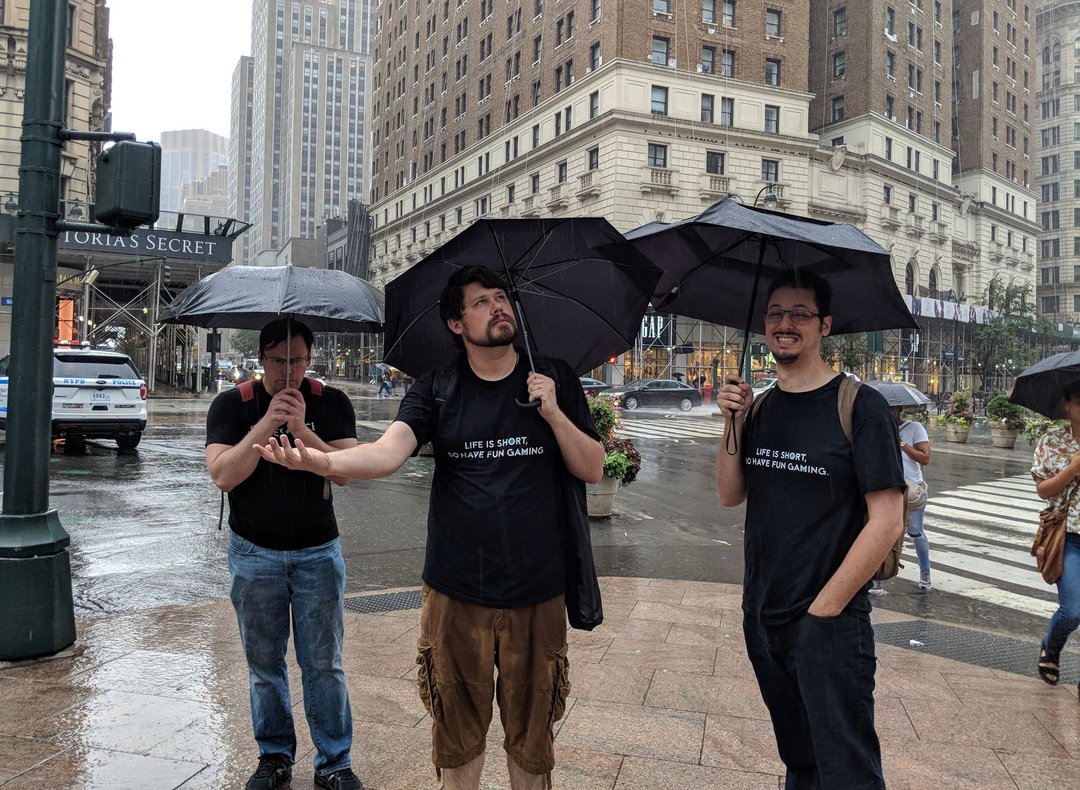 When you get flood warnings in Grand Central, you should take them seriously.

Once we had gotten inside and dried off, we weren't disappointed: the Play NYC event last year had been interesting in concept, but many of the games on display had felt unfinished. This year however, everything looked a lot crisper and cleaner. The games had more polish on them, and the presenting designers were ready for the crowds. The design of the entire event was just better, and let attendants get right to finding a game that interested them. 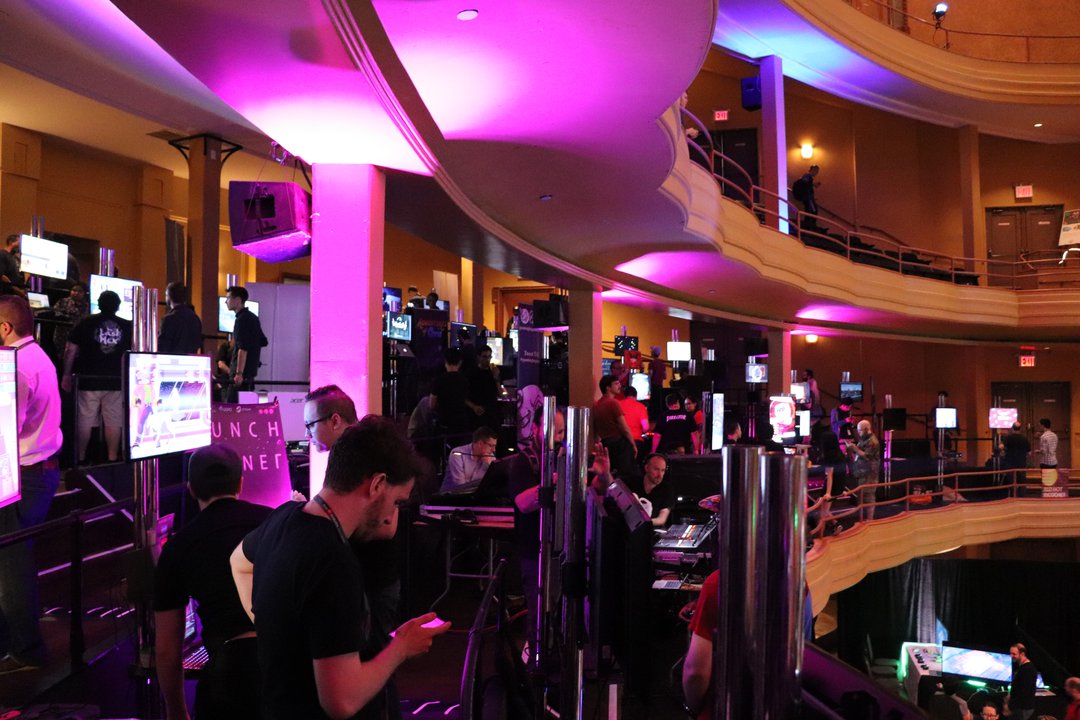 The second floor was a tightly packed array of games being shown off, usually by the sole creator.

There was a lot to cover, and we are hopefully going to be writing a lot about games we saw at this convention. There were some fantastic ones like The Last Hex that were great, but still unfinished and months away from full release. Still, the event itself is worth writing about, just because it offers something so very different from other conventions like E3 or GenCon. This is an event that feels more intimate, and that's a huge part of the appeal; for us as press, it let us get right next to new designers and ask lots of questions. For convention-goers, it let them skip huge lines, play a lot of interesting games, and maybe even imagine themselves as one of the developers themselves one day.

To cover Play NYC properly, we'll break it down, letting each writer speak for themselves.

Eric: A Place For Experimentation

The trend that caught my attention at Play NYC was games as art, rather than as commercial products. The Graffiti Games installations and Unicornelia weren’t there to try to sell copies or get funding, but simply to be experienced. Each pointed out or highlighted a certain aspect of life; good, bad, or neutral. For some of them there wasn’t even any way to win or lose, you just played to see what would happen. That kind of avant-garde game development isn’t something you’d ever find at a huge convention like PAX, where everyone is fighting for the attendees’ attention and money. Proper write-ups about these games will be coming soon. 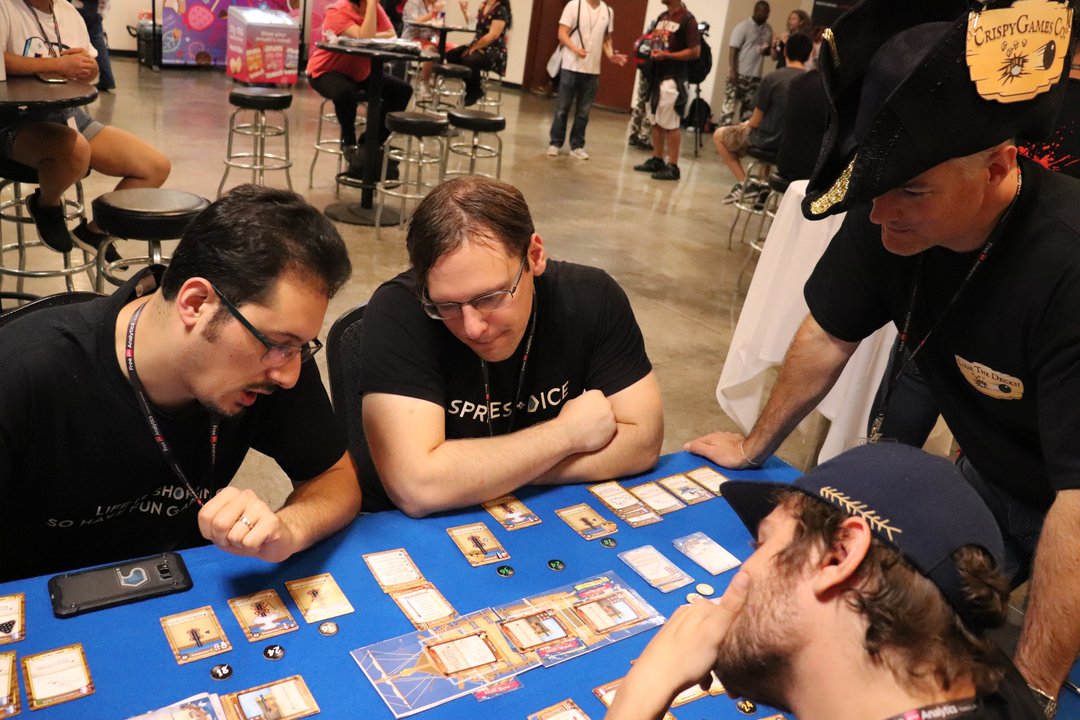 Board games made a stronger appearance this year too, with several Kickstarter projects on display.

With that said, my pick for best game of Play NYC goes hands-down to Avaria VS. Imagine Final Fantasy or another classic JRPG, but PvP - your party of three against another party of three. Add in a timer to make sure the action keeps moving, and you’ll have something pretty close to this game. Aside from being a great twist on a very old genre, the polish on Avaria VS was amazing. Expect a full article about this one in the near future.

Otto: So Much Variety In Just Three Floors

After our day at Play NYC, and my first con as press, I’ve discovered not just how many games are being made in our home state, but the sheer variety of what’s being created. No two games were truly like one another. Just take a look at two of my favorites from the con, Exposure from The Sheep’s Meow and Kingdom Bash from Matthew Estock. 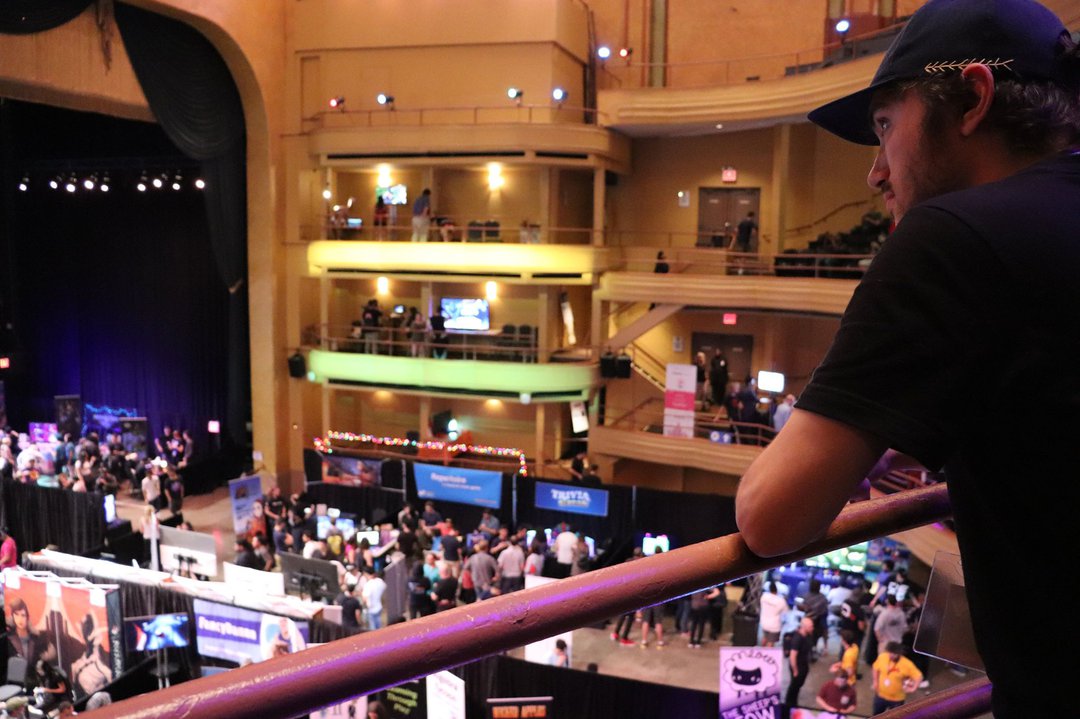 Starting with the latter of the two, Kingdom Bash is a pixelated couch multiplayer game being developed by a one-person team. With quick gameplay that’s easy to get into and fun to improve at, I was quickly reminded of my days playing Bomberman as a kid. On the other side of the spectrum, and reminding me of nothing I’ve seen before was Exposure, an abstract game where you play as a moth that can change color to blend into its surroundings to avoid predators, all while saving its babies. Filled with contrasting colors and unusual shapes meant to represent actions without actually doing anything is a fun experience that requires some decoding to truly understand.

If one game really encapsulated how much Play NYC's grown up in just year, it would be Avaria VS. It's a turn based game that's managed to do something new with the genre, and also make it very gorgeous in the process. Making your own team of three powerful characters and being able to challenge someone right next to you is a fantastic feeling - especially since the status effects you can inflict actually do things like change their controls, alter what they can read on the screen... I'm glad that they were able to share their work and build up a following, because this game might be some of the best local multiplayer I've had for a long time.

This gif is from a much older build of the game, but expect a full article soon!

It wasn't just Avaria, of course. Shotgun Farmer takes the FPS genre and manages to do something ingenious by forcing you to never reload. Instead, you have to shoot the ground and 'grow' your new weapons, spending precious time collecting and defending yourself between bursts of farming violence. Cede is an action RPG that is trying to blend biblical references, farming, and combat all at once - and it even works! There are so many great games just under the surface of the constant stream of AAA sequels we see on most news or conventions: Play NYC delivers in finding you things off the beaten path.

PlayNYC for me is all about finding gems in the rough. Sometimes you play something that seems like it’s barely reaching an alpha state, and sometimes your socks are quite literally rocked off. For me, this year’s gem theme seems to be “the old given a new sheen.” I had the excellent fortune to come across yet another amazing, modern point-and-click adventure; Lamplight City is set in a steampunk Victorian city, ripe with cases for your detective to solve. You can expect an article about this one in the coming weeks (as soon as I’ve had a chance to play more of it). For fans of the old school NBA Jam, a new kid on the block called Dunk Lords captured my heart as well. Both games play smoothly, with stylized artwork and solid gameplay. 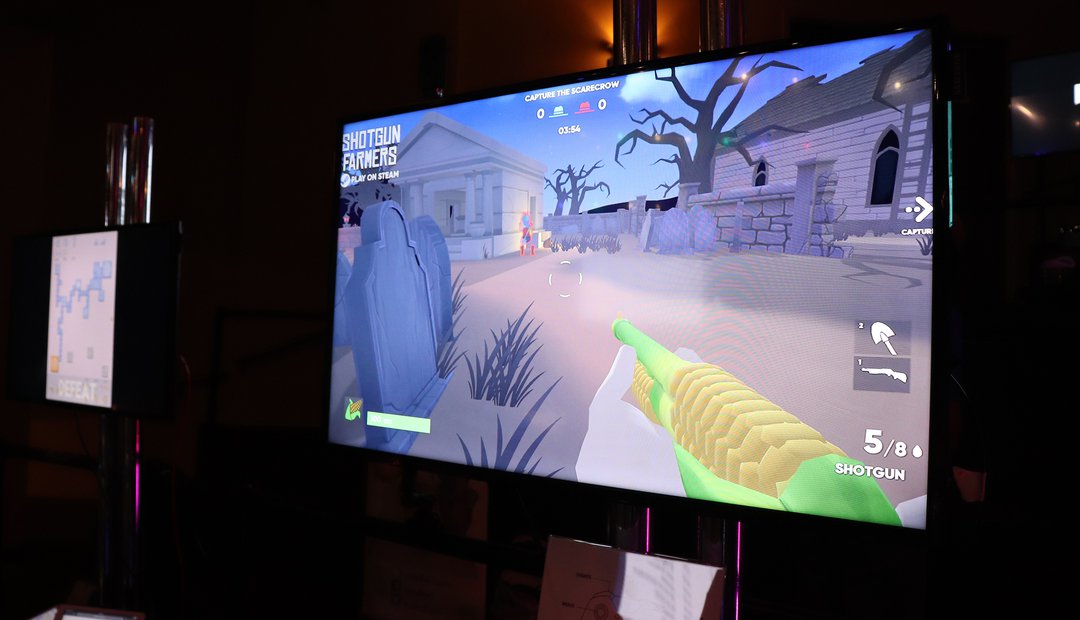 Shoot the ground, grow more shotguns. Why hasn't this been thought of before?

Overall, it’s great to see PlayNYC growing from its humble beginnings to something just a little bigger, a little grander. Last year I came away with just a single title I couldn’t wait for, Unavowed, and this year I’ve come away with several time that. I cannot wait to see what the future holds for this local convention.

A Convention for Creators

Play NYC is no PAX Unplugged, and that's okay. In fact, that's amazing: the world of game development is not monothic, and we need a variety of conventions and events that help showcase that point. Playcrafting has done an amazing job not just curating content, but also helping develop new talent in the industry. I don't believe I'd be overstepping by saying that groups that foster grassroots game development and easy access classes are vital to seeing our game industry thrive. 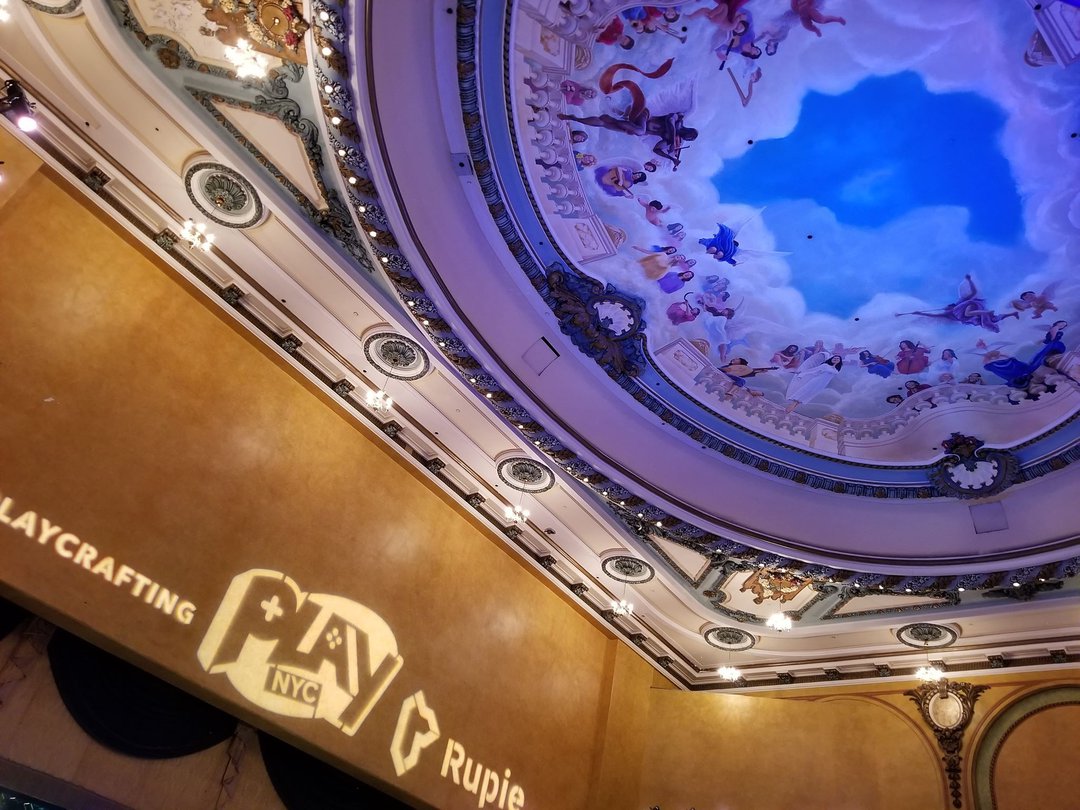 Our whole team was glad we got up at 5 am to take the train into New York City to see what this convention had to offer. Once next year rolls around, I'm sure we'll be be even more excited for the next one.