Fortnite:
The Great Unifer Of Students And Friends 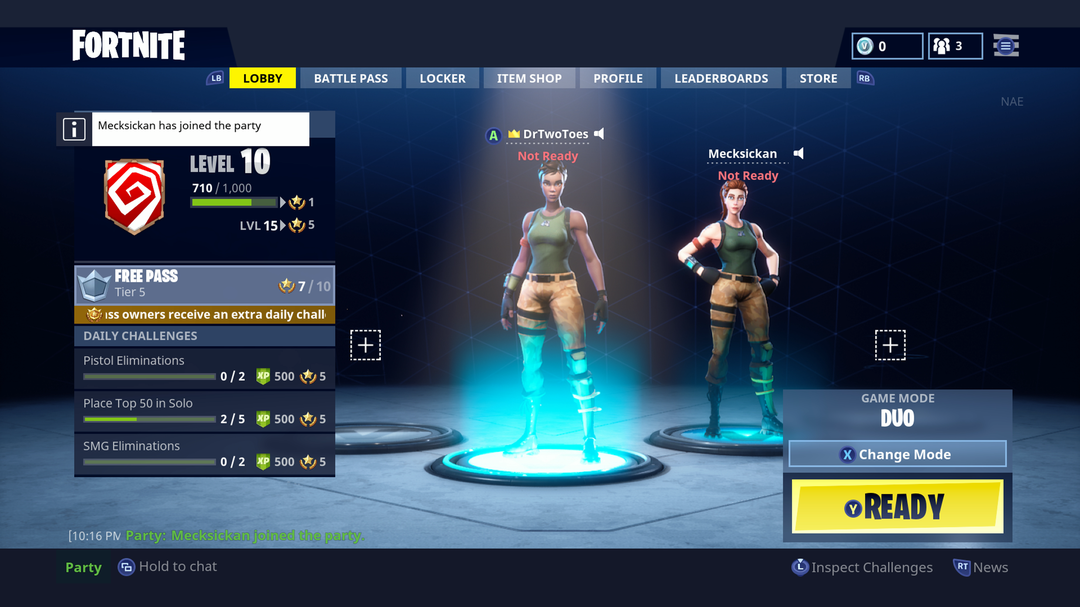 I know, I know, I’m late for the Fortnite hype bus. There’s always been something about that style of game that has held zero appeal to me; and it’s not that there’s some moral opposition to it being a PlayerUnknown’s Battlegrounds’ copycat. I don’t really have any interest in that. While I’ve never played PUBG, There’s a pretty resounding consensus from people who’ve played both that for the most part, they’re different experiences.

It’s more than that. Much like PUBG, Fortnite is intimidating. People play that game a lot, and they’ve gotten pretty good at it. Shooting, building, knowing what spots on the map are good for what; these are all important things to learn if you ever want to secure that number one spot and earn yourself a victory royale. If you want to learn these things, you’re gonna have to do it in the middle of matches.

Now I know what you’re thinking: couldn’t the same be said for most competitive multiplayer games? There are things you have to learn to 'get good', and getting demolished by people who already know these things is the only way. This logic is absolutely right, which is exactly why this same barrier to entry existed for this game alongside others like PUBG or Halo. If I’m interested enough in a game however, I’ll find a way through.

With Fortnite, that way through was with friends. 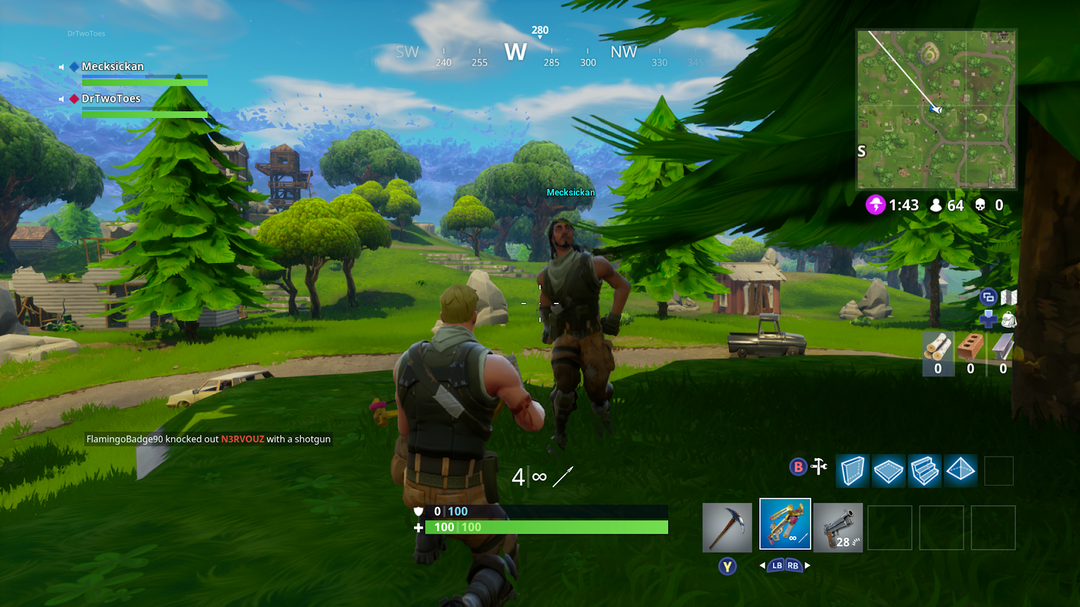 I’ve been rooming with my friend Nick for three years now. We became friends pretty quickly during our school’s orientation after he complimented my Fallout shirt, but I ended up rooming with an acquaintance from high school instead. This was a huge mistake.

On paper I was living with two other people, but in reality it was more like three. My friend’s girlfriend was constantly there, incessantly cooing sweet nothings into his ear all night and leaving suitcases full of her clothes on the floor. It was nightmarish, frankly.

I moved out the next semester. I thought I had a single room for a little while, until one guy came to check out the room for a potential move, with his girlfriend. I wasn’t having it. I frantically posted about the situation, hoping someone would respond and save me. Thankfully Nick did.

Three years later, and he’s one of my best friends. In no small part, that friendships been helped through gaming. 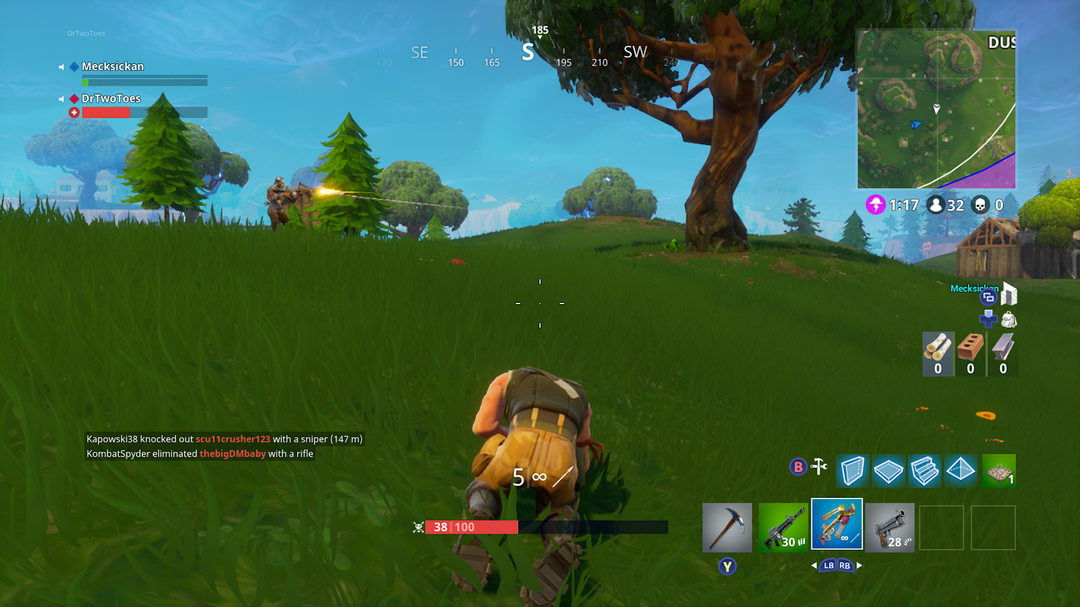 The End Of An Era

This is my last semester of college, which means it’s the last semester Nick and I have of sharing a room together. Because of this, Fortnite has become the perfect way for us to spend some quality time. I’ve learned some things about him, namely that he’s a horrible teammate. On multiple occasions we’ve been in some serious firefights. When I’ve gone down (naturally), he’s waited nearby, watching me die only to swoop in and take my weapons. It’s usually all in good fun, but I’ve had to suppress some urges to physically lunge at him, especially when I had a minigun.

Still, playing with him has helped to quell some of the nerves I had about jumping into a 1 vs. 100 shootout. He’s played more than I have, so it’s been nice relying on him to take the lead and do all the building. Some of the most fun I’ve had this entire semester has been camping out with him during the now extinct sniper battles, communicating across rooms about our next steps and where we see groups of enemies across the vast map.

Fortnite makes my heart race and takes my breath away. Not in some profound artistic sense, but more like I just finished ten minutes of cardio (impressive, I know). It feels strategic and tense. You never know who might be around, if or when you’re safe. It may not be as frightening when you’ve got an ally nearby, but this strategic tenseness only gets amplified when playing with friends. When you have a partner in this, you aren't just worried about your own victory anymore. 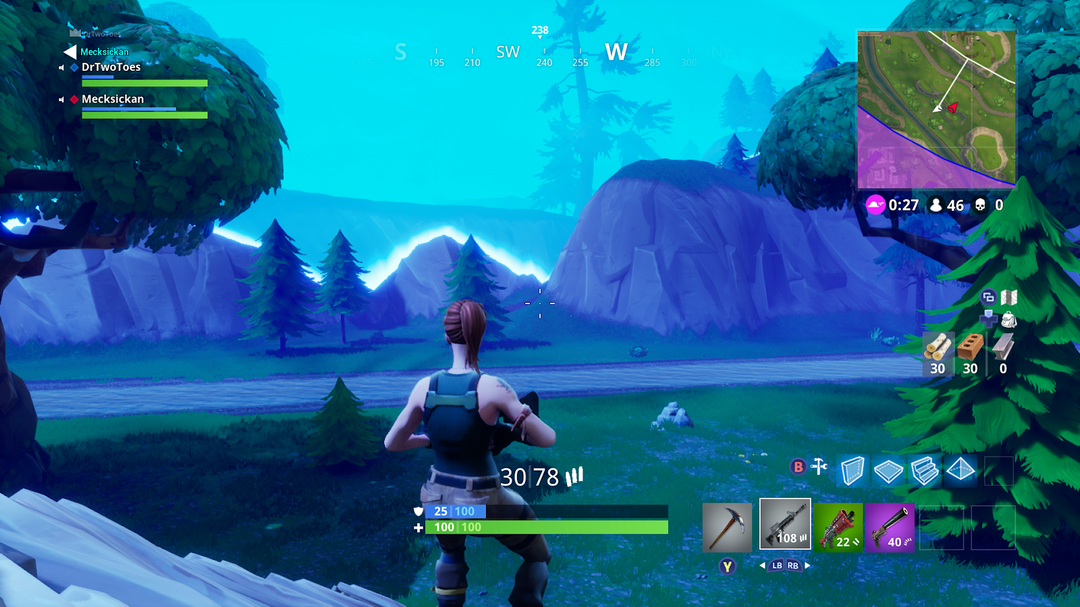 Who else can you count on when your back is to the circle?

I don’t have much interest in playing Fortnite on my own or with strangers. I’ve played a few solo games and it’s not an unenjoyable experience, but it just can’t compare to everything that comes with playing with a friend.

Speaking of friends, Fortnite is a great way to make them. I don’t need to say how big the game has become. It’s why I haven’t bothered explaining what it is. If you haven’t at least heard about it in passing, you either must have your hands over your ears or just don’t play video games. But for anyone that does, you can bring up Fortnite in a conversation and there’s a decent chance they know what you’re talking about, even if they themselves don’t play it.

Nick and I moved into a suite this semester. Out of the four new suitemates I have, three avidly play Fortnite everyday. What are the odds? Not only have I been able to play with Nick, getting in some quality time with a longstanding friend, I’ve been able to use this game as an introduction to new friends as well. Sharing this tense, strategic experience with three other people in three adjacent rooms is something I’ve never done before. It’s made my last semester of college a pleasant one, and if a video game can do that it’s a good one in my book. 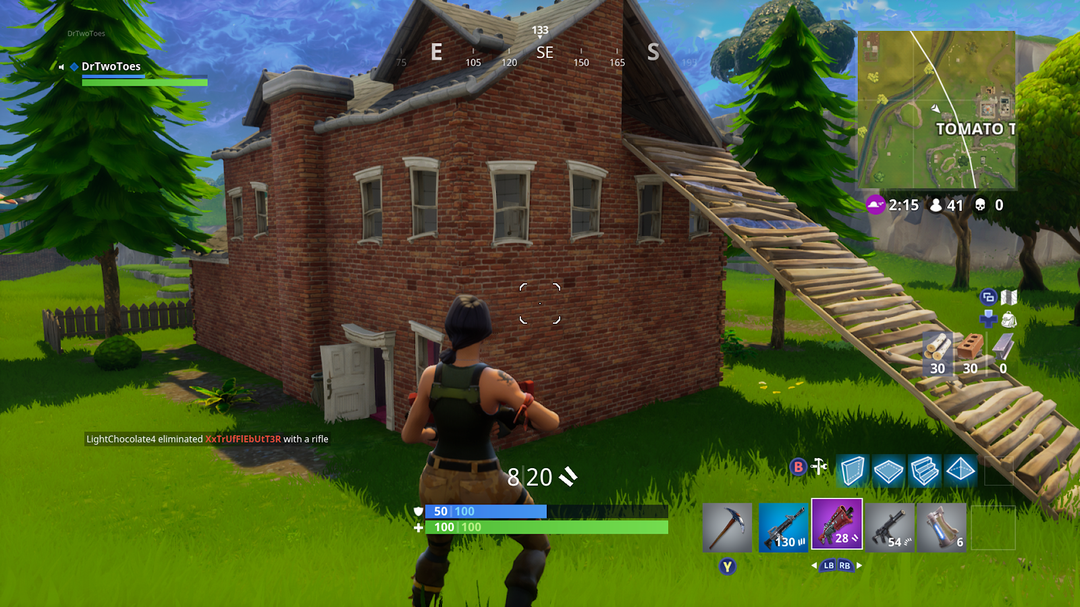 The house that friendship built...and will probably destroy for materials!