A Light Game About A Heavy Workload 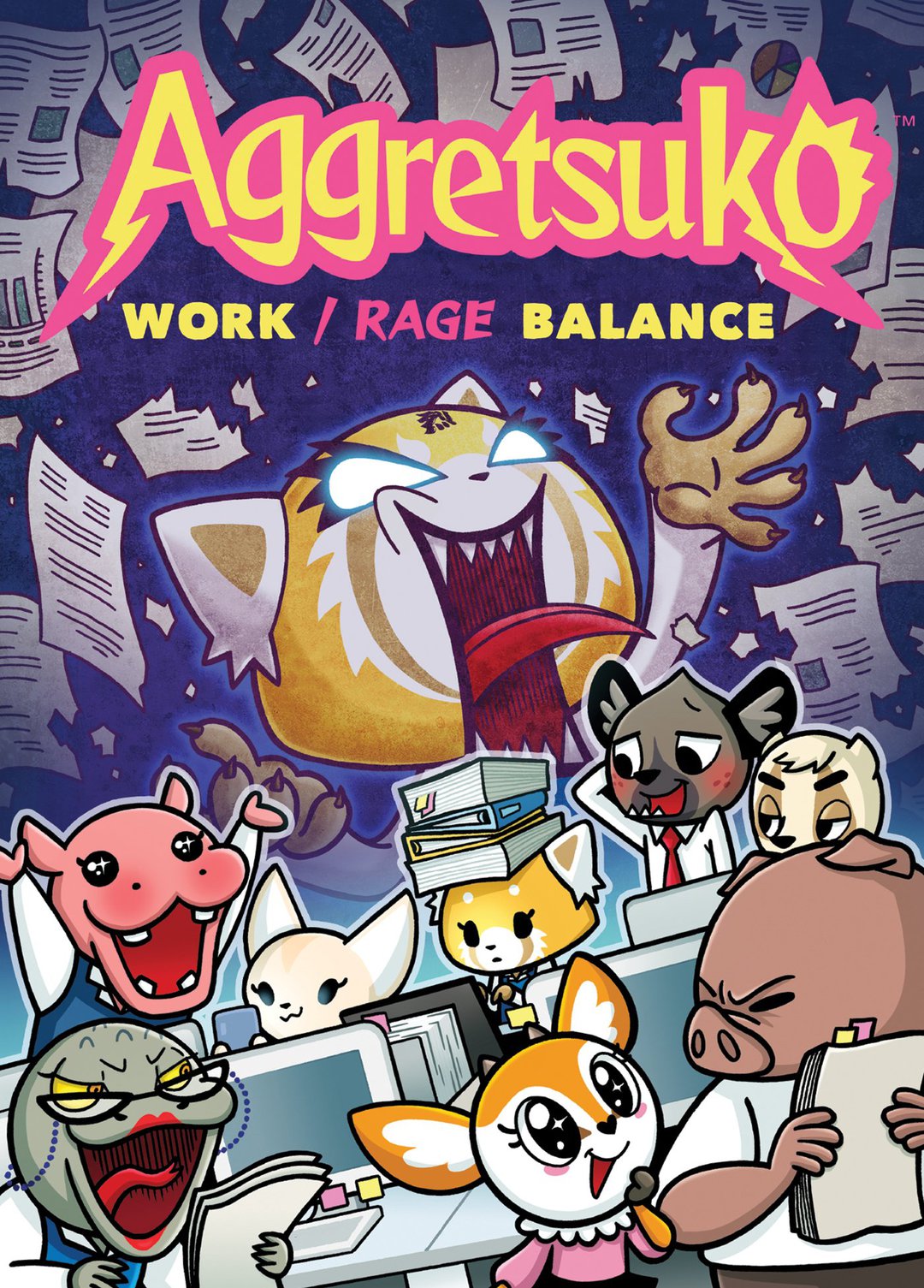 Aggretsuko: Work/Rage Balance is a light and quick trick-taking card game from Oni Games (an imprint of Oni Press). The game takes place over five “work days,” each represented by a hand of cards. The goal is to get rid of your cards by playing sets, runs, or flushes based on what’s already on the table; it’s sort of like Poker meets Uno, but with the added flair of wanting to yell at your friends for getting out of work while leaving you stuck with the boss after hours.

It's a game that knows what it wants to do, gets right to the point, and gives you some flavor on the side. Is it right for you? 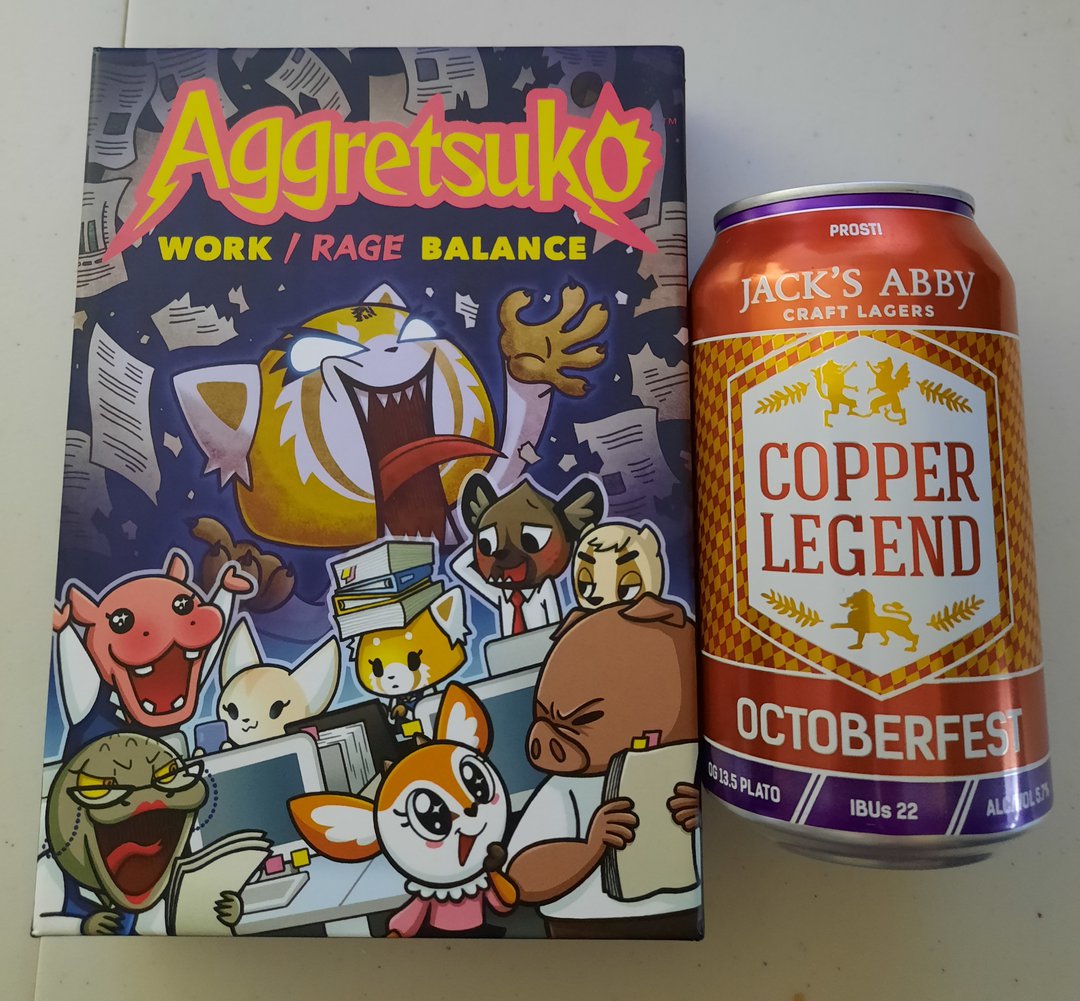 The box art is perfect (Work soda for scale).

How to Play: Take Tricks or Take Overtime

Like most trick-taking games, you take turns during a round making plays, with everyone hoping to get the amount of cards in their hand down to zero. Each play that a player makes has to follow two rules:

These two rules mean that being the player to start a round gives you a lot of control over what happens next, so it’s to your advantage to keep control as long as possible by making plays that your opponents can’t beat.

Although, if you get stuck, you can always use the Rainbow Bomb - four consecutive numbers, one of each suit. This is a special play unique to Aggretsuko, and it ignores the usual card number restriction. The only thing that beats a Rainbow Bomb is a Rainbow Bomb using higher numbers, so it’s a very powerful trick to have up your sleeve.

If you can’t play, then you have to pass and you’re out of the round. Once all but one player has passed, the round ends and a new round begins. This also means there’s a new starting play that everyone else will have to follow.

As soon as one player’s hand is empty, the work day ends - but everyone else gets stuck working overtime! You get points based on how many cards you have left at the end of the day, and whoever has the lowest score after five days is the winner.

As we all know, the goal of work is to go home. Being left with a pile of paperwork is not a great feeling. 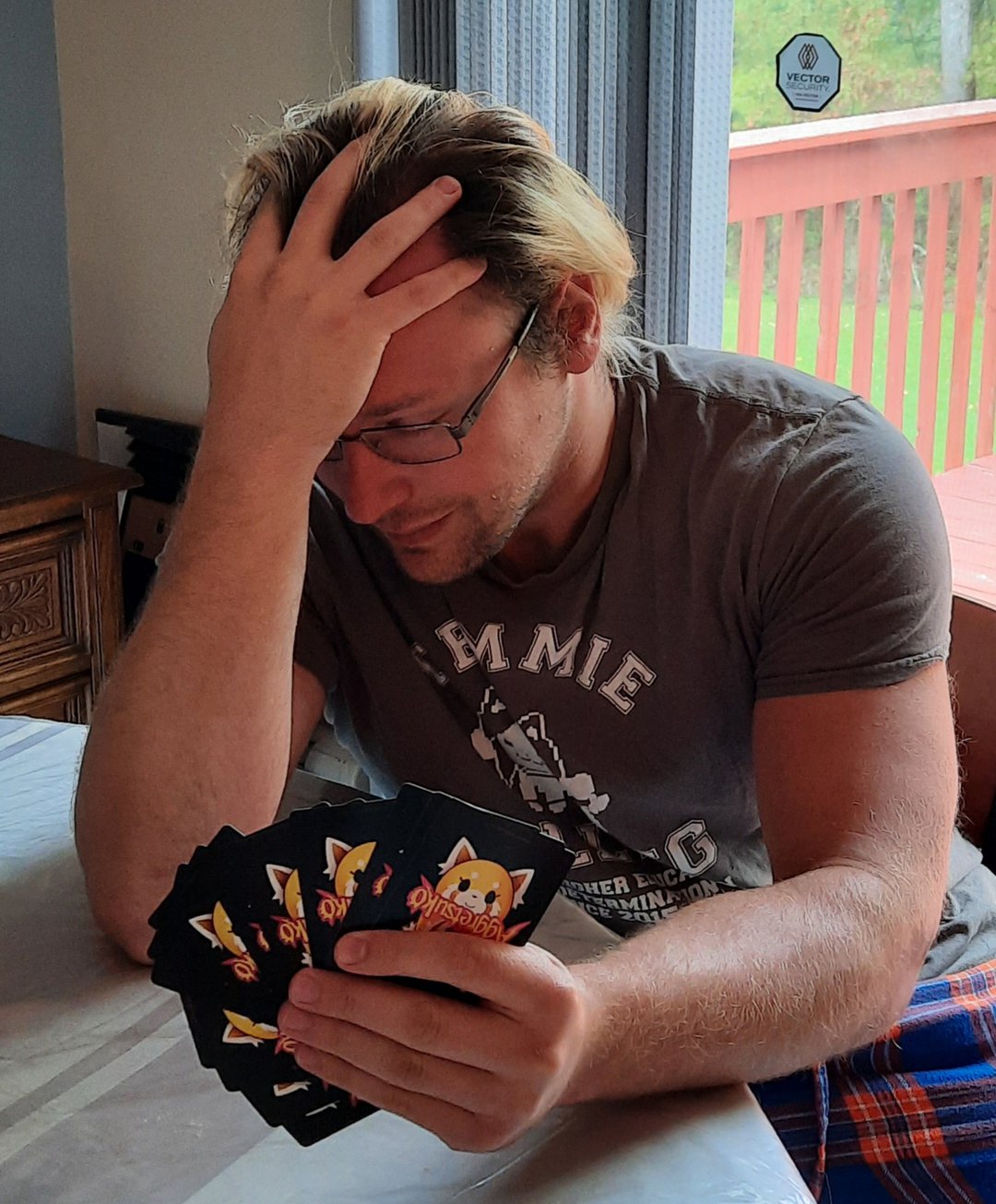 Here we see Eric rocking the work-from-home uniform while facing down a LOT of overtime.

So much for work; what about rage? Once each work day, when you pass, you can choose to flip over your character token and Rage. When you do, you choose one card that’s currently on the table and add it to your hand at the end of the round. A well-timed Rage can turn the tide of a day, especially if you can use it to complete a Rainbow Bomb.

However, losing your temper has a downside; at the end of each day, everyone who got through the day without Raging can discard a card before the scoring phase. If you’ve Raged that day, though, you’re stuck with whatever you’ve got left - your coworkers won’t help you out mid-tantrum.

When you get so mad that you... take on someone else’s task… that they already did…? Hey, it helps you win games.

Finally, there’s an advanced rule that allows players to each give away one card to another player before each work day starts. It sort of mitigates the frustration of getting dealt a bad hand, but it often doesn’t feel like enough of a tweak. I’d recommend experimenting with variations on that rule like giving away three cards instead of one, or doing it before each round instead of each day.

It’s fast and silly, and a little (though not a lot) deeper than it seems at first glance. Work/Rage Balance is nothing Earth-shattering, but it’s not trying to be; overall, it’s a solid choice for a light and casual game. We had fun playing, with some rounds ending after a dramatic Rainbow bomb and others becoming huge upsets as someone figured out how to play just the right order of cards to empty out their hand before someone else did.

The real draw here is, of course, the fact that it’s Aggretsuko. Fans of the series will enjoy this game’s art and plot, such as it is. Plus, it’s just fun to imagine yourself as a frustrated employee at your day job just waiting for the right moment to rage out.

…That might be the first time anyone’s ever written that sentence. 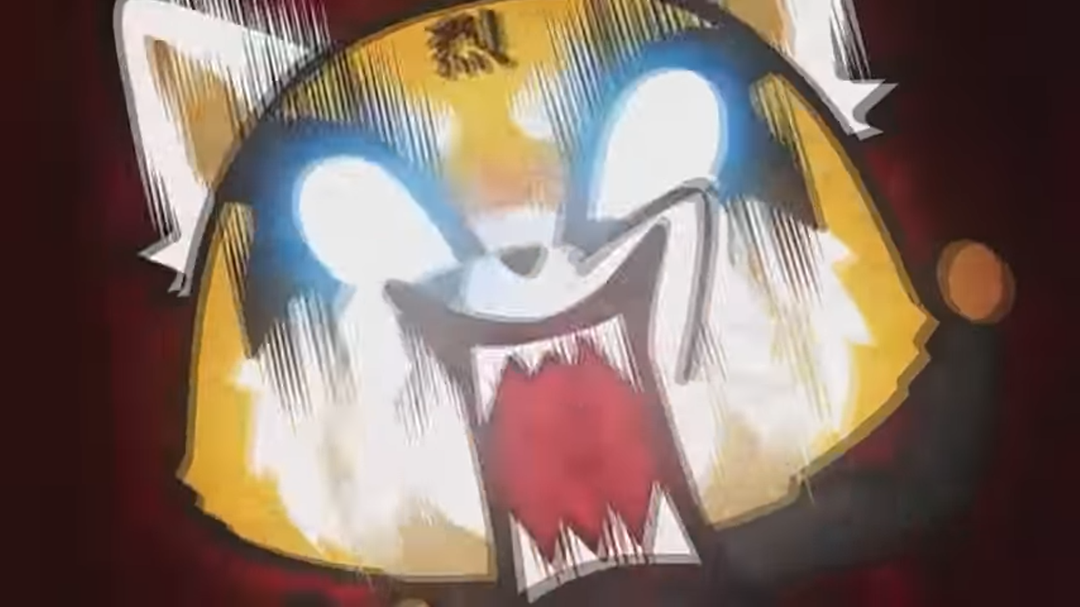 You can have some extra fun by doing your best death metal scream when you Rage. Just imagine having to do TPS reports on a Saturday.

However, there’s a little dissonance with the cards themselves. They’re supposed to represent tasks you have to do before you go home, but they’re decorated with characters and quotes from the series. Maybe Oni Games thought it would be boring to have a hand full of “collate papers” and “pour the boss’s tea,” but it would play more into the theme of the game instead of just leaning on brand recognition.

Still, much like Aggretsuko itself, the game is cute (if occasionally soul-crushing) and gives you a chance to see all your favorite characters in their least-favorite place: the office. Even if you haven't seen the anime the game draws from, anyone with an office job is going to find some enjoyment in the art on the cards.

Fans of Aggretsuko are the obvious audience for this game, but it’s a solid addition to any collection if you need a light palate-cleanser or a casual game to play with friends. Work/Rage Balance isn’t perfect, but it’s still a good time. At $22.00 it’s not much of an investment, and you get what you pay for: It's enjoyable, its fast, and a great way to warm up a group of friends to a full night of games.

There are a lot of trick taking games out there: if you don't already own one, Aggretsuko is a great introduction while also having some fun art and a cute theme. It isn't a must buy, but it's certainly worth being on your shelves if you need a reason to complain about your job over cards.