A Shadow Has Fallen Across My Wallet 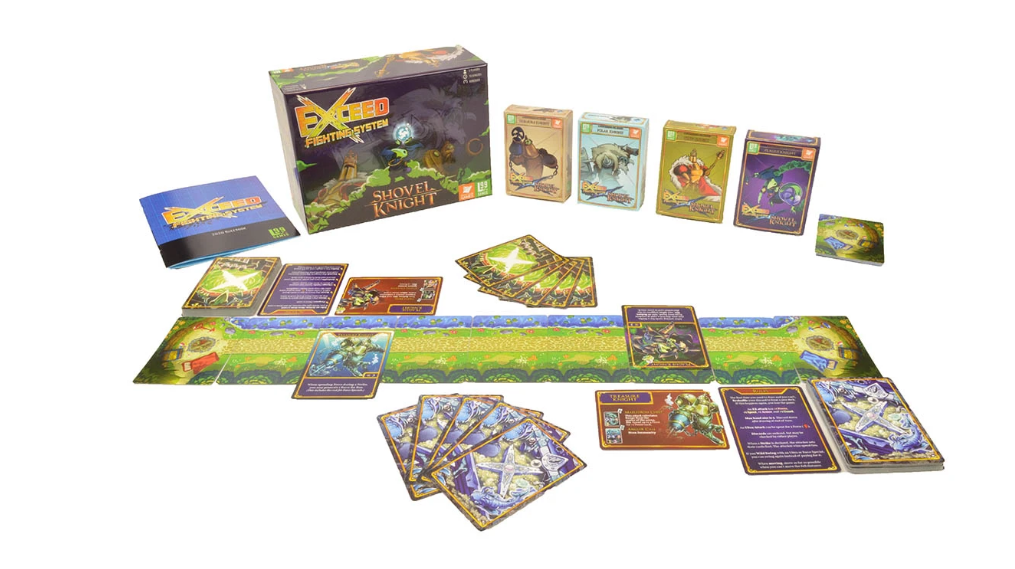 The Order of No Quarter takes the field with four new characters for the Exceed Fighting System: Plague Knight, Polar Knight, Treasure Knight, and King Knight have joined the battle. While not as off-the-wall bizarre as some of the fighters in the Hope Box, each of these villainous knights brings his own unique style, mechanics, and feel to the game.

I've been really enjoying the video game/board game crossover trend that's been happening. Any reason to have a chance to play as some of my favorite characters again is okay in my book!

In my last article, I went in-depth with my thoughts about the new season of this excellent fighting game. Everything I said about the Hope Box holds true for the Shadow Box; the good and the bad. However, I also said that the Shadow Box would be a better choice for new players who were interested in trying out Exceed, and I still stand by that.

If you want to know my thoughts about Exceed as a game if you've never heard about it before, make sure you check out my original review from last season's boxes. For now though, lets jump right in to the fighters in the Shadow Box!

Plague Knight is definitely the most challenging character in the Shadow Box. Unlike Tinker Knight or Mole Knight, the issue is not that his mechanics are weird or especially hard to wrap your head around, just that he requires even more careful hand management than other characters. 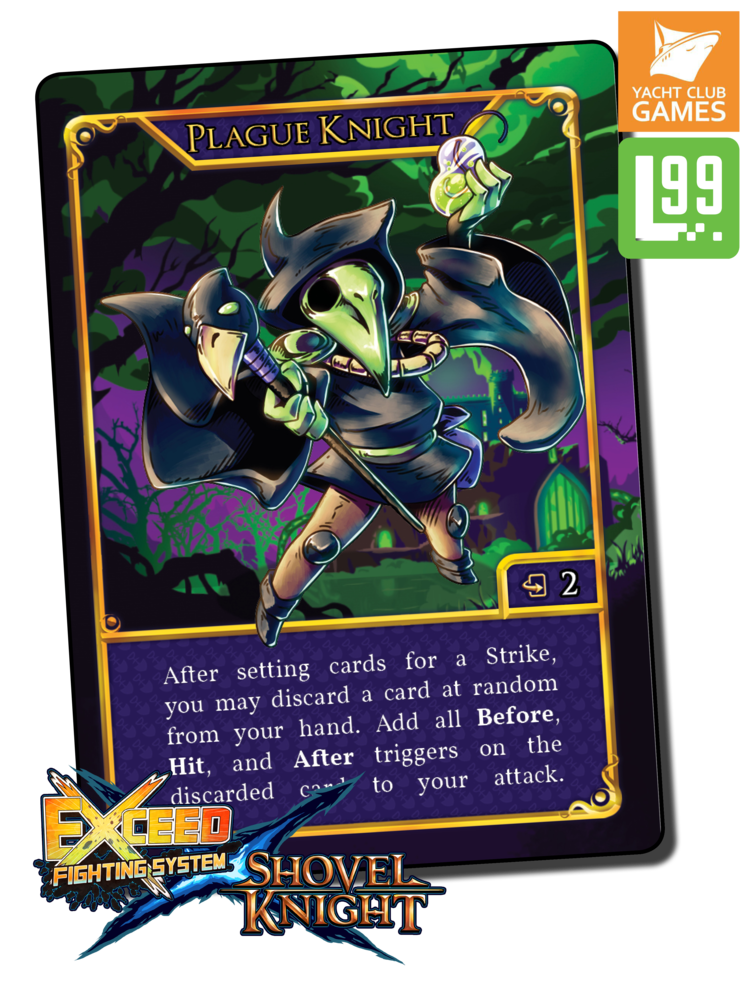 His character ability is, “After setting cards for a Strike, you may discard a card at random from your hand. Add all Before, Hit, and After effects to your strike.” Discarded an Assault? You get to move forward two spaces before attacking and take another turn. Focus? You can draw a card after the Strike is resolved. Some others just provide flat boosts to speed or power without needing to waste time setting up Boosts. His ability makes his attacks unpredictable and powerful, but note the at random. That’s where the trouble - and the fun - comes in.

Naturally, the ideal situation is that you only have one card in hand, and it has the exact effect you want. Of course, that’s not a very realistic situation - sitting at one or two cards in hand is almost never a good strategy in card games, and hoping that single card is the one you need is much too risky. Then, too, there’s the obvious problem that anything you discard can’t be played later. You need to carefully cultivate a hand full of useful effects to split the difference between having good discards and not running yourself out of options. 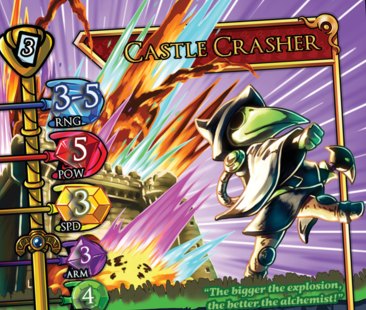 Or just throw caution to the wind! It's what Plague Knight would do.

Plague Knight is a volatile concoction of card effects that sometimes work, sometimes don’t, and always burn through your hand faster than you want. I don’t doubt that he’s powerful when used well, but I haven’t quite found his balance yet.

At first glance Polar Knight looks pretty weak. His specials have low damage, and he seems focused just on moving himself and his opponent around the board. Well, I am here to tell you that Polar Knight can be a brutal opponent. 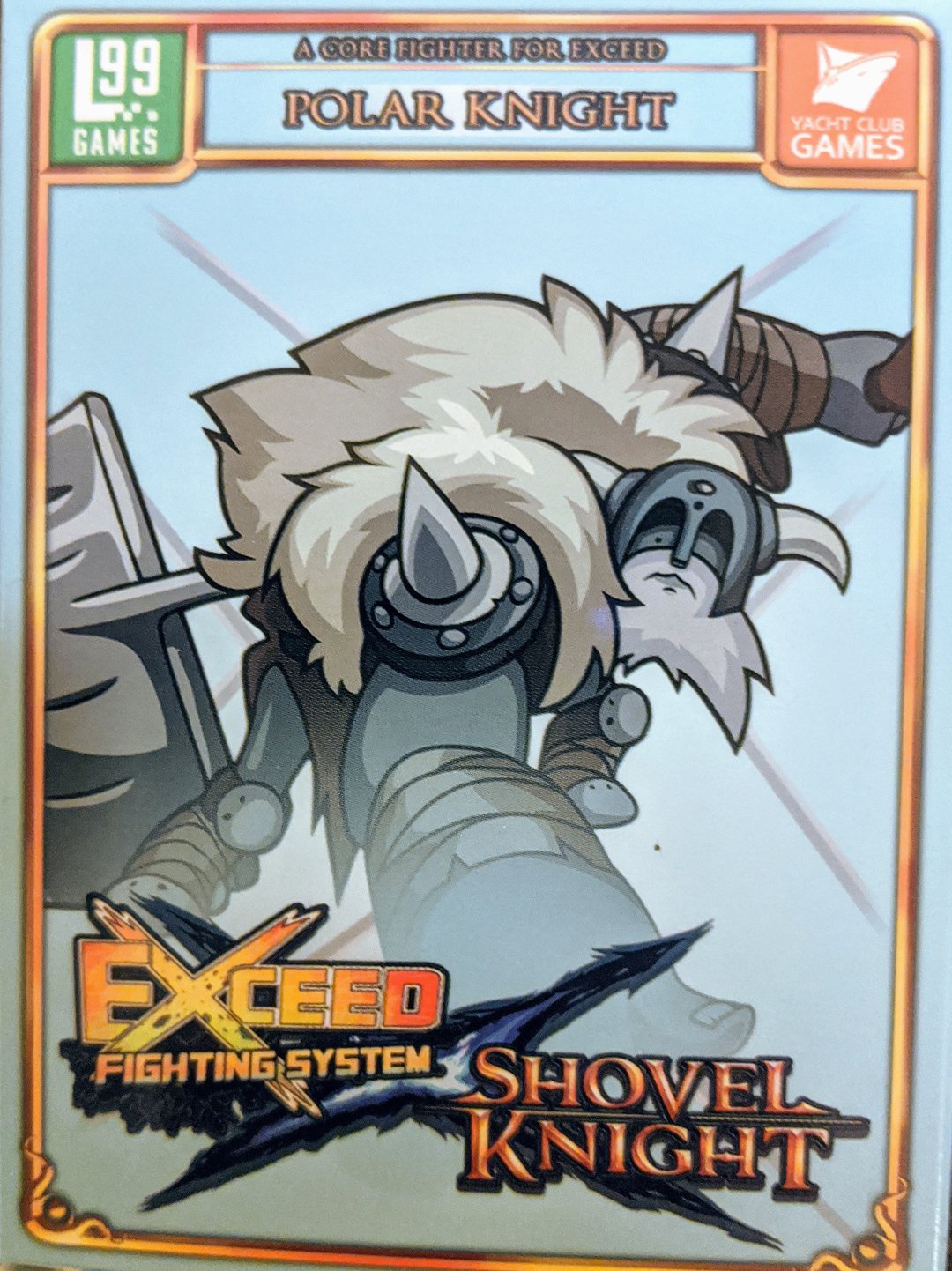 Polar Knight’s ability lets you lay down Ice Spikes every time you attack, to a maximum of five (out of only nine spaces on the board). Then, if your opponent is standing on one when you hit, you can remove it to deal extra damage. It doesn’t sound like all that much, but that’s where all of Polar Knight’s movement effects come into play.

The key here is that you don’t remove the Ice Spike for extra damage until the Hit phase of the Strike. That means any Before effects happen… well, before that, and a lot of his Before effects allow him to move the opponent around to get the positioning just right. I actually haven’t played as Polar Knight myself, but Adam used him against me multiple times and was hitting me with Ice Spike damage nearly every turn. Let me tell you, +2 (and later +3) damage on every attack adds up quickly when you only start with 30 life.

His greatest weakness is that his specials are pretty slow, which means you need to carefully watch your range and save his basic attacks for when you’re in close. The good news is that, just like in Shovel Knight, he has ways to charge in and hit from basically anywhere on the board.

Unfortunately, while a Plague Knight player can have fun wildly throwing attacks and effects around, someone who isn’t properly leveraging Polar Knight’s abilities is going to feel underpowered and frustrated. For that reason, he is a great character for an Exceed veteran, but not a good choice for an inexperienced player.

Plague and Polar Knight are certainly usable by newbies, but mastering them takes a bit of experience with the game. With that out of the way, we’re getting into the reasons why the Shadow Box will be good for beginners. 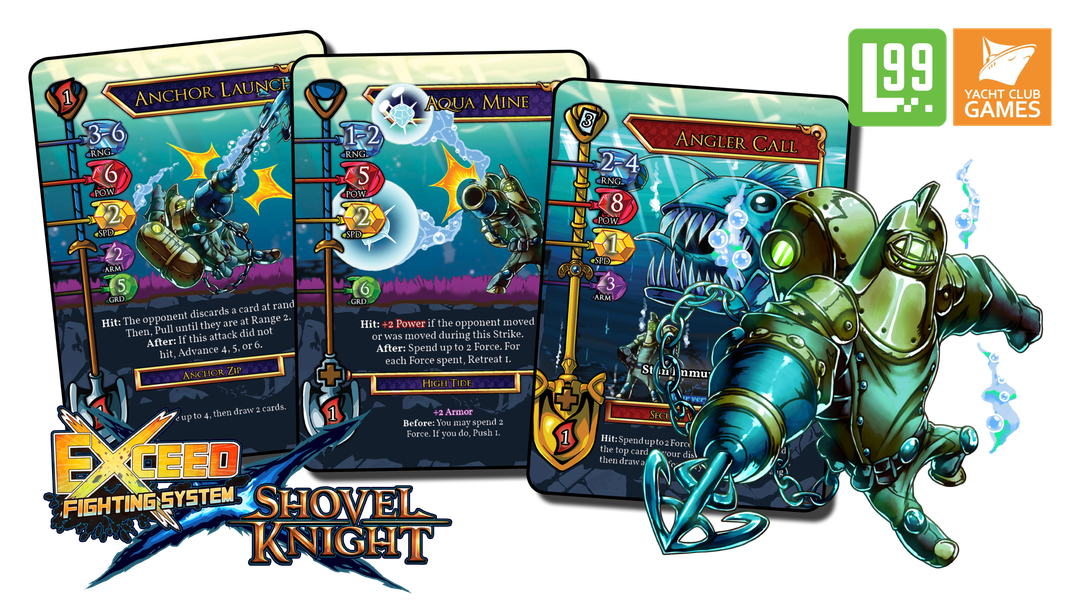 Have I mentioned recently how great the art is in this series?

Treasure Knight may just be a new player’s best friend. While he’s usually defined by his greed, in Exceed this stalwart mariner isn’t afraid to throw his wealth around to get an edge in battle. Treasure Knight’s character ability lets him generate one Force for free whenever he needs to spend it during a Strike - and, after he Exceeds, whenever he needs Force for anything. Movement, card draw, expensive Boosts, everything becomes much easier for him to do.

While that’s obviously a powerful ability no matter who you are, I say it’s specifically good for new players because it makes the resource management aspect of Exceed a little bit easier. You normally have to generate Force by discarding cards, so he’s letting you save those cards for later while still using some powerful attacks and abilities. Note that this does not help you use your Ultras, since those have to be paid for from your Gauge, but it lets you play a little more freely with everything else.

Other than that, there’s not a whole lot to say about Treasure Knight. He has some ways to retrieve cards from his discard pile, which can be leveraged into more powerful strategies, but for a beginning or casual player he’s just a solid and fairly simple character.

King Knight is an interesting one. He’s also newbie-friendly, though for a very different reason than Treasure Knight; while Treasure Knight gets a break on card costs, this self-indulgent fighter has extremely powerful - and expensive - cards available to him at any time. 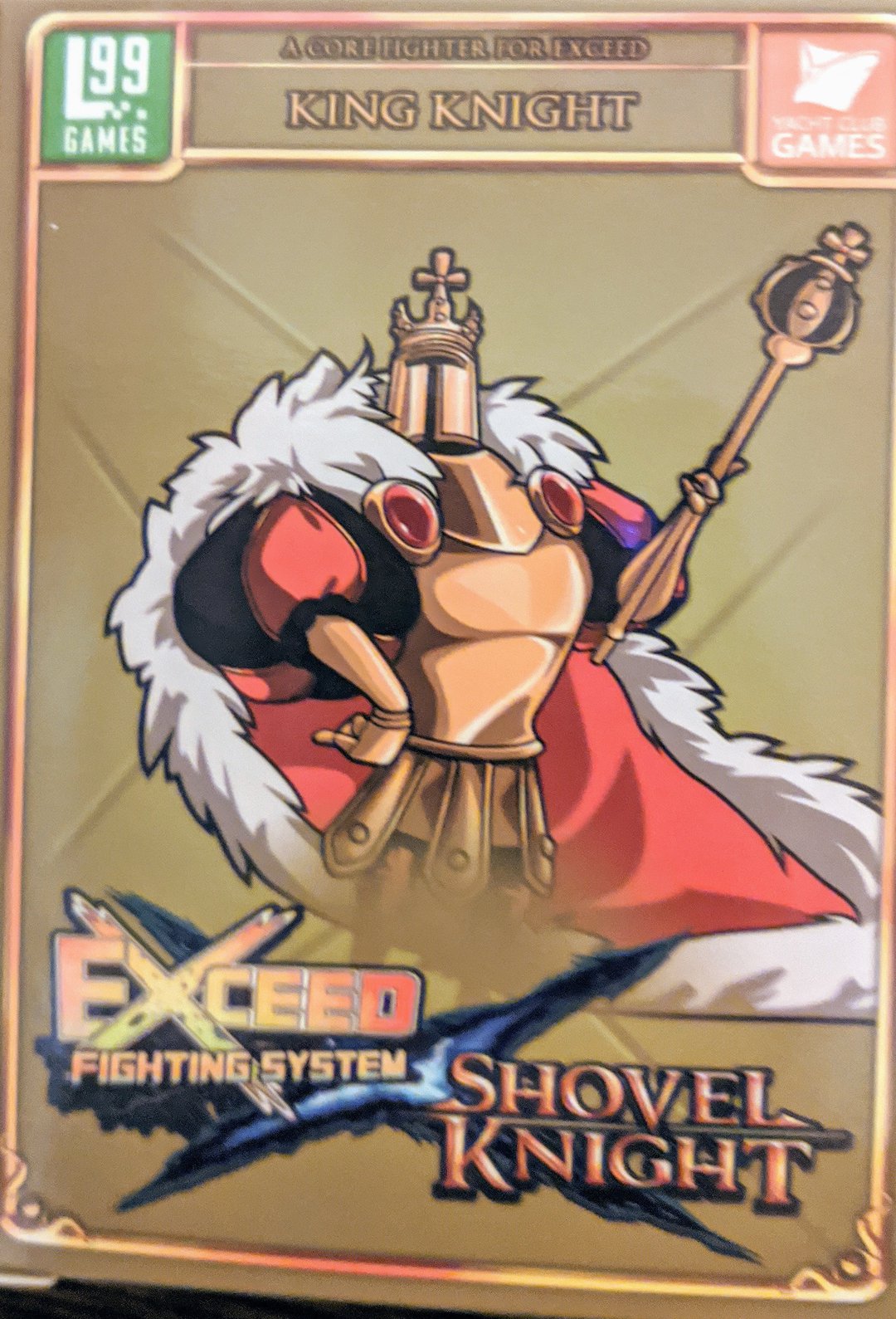 King Knight starts the battle with two Royal Decrees at his disposal. These are special cards that sit outside of the play area, which you can attach to King Knight at any time to power up his next attack. When he Exceeds he also gets access to his two Glorious Decrees, which are even more powerful!

Well, I say you can use them at any time, but really it’s whenever you can afford to pay for them. These are the most expensive Boosts in all of Exceed (aside from Tinker Knight’s specials, and he’s meant to use those for free anyway). Thankfully, King Knight has something to help with that: whenever you play a Continuous Boost or a Decree you get to immediately draw a card - which, remember, can be discarded to generate more Force. He’s no Treasure Knight, but this is another fighter who’s got a lot of resources to spend.

The Shadow Box has a great array of characters, including some that are good for beginning players. While the fighters aren’t quite as weird as what you’ll find in the Hope Box, this set still represents the game branching out rather than going for power creep to keep people buying new characters. 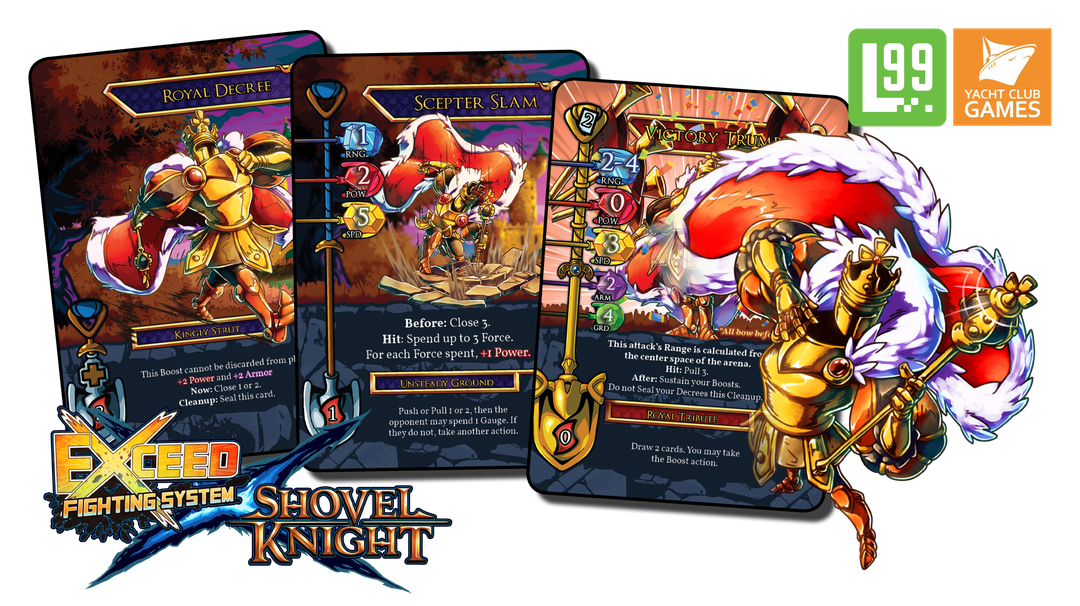 Overall, whether you’re expanding your Exceed collection or just getting into the game, I would definitely recommend picking up the Shadow Box. It's a great way to enjoy some Shovel Knight flavor around the table while also adding something new to an already impressively fun card game.