The people of Robo-Moscow are unhappy. They toil for scraps while the Robot Czar grows fat (somehow). With social structures crumbling and mechanical tempers strained to the breaking point, things can only end in one way: Revolution!

The Revolution Will Be Mechanized

Cogs and Commissars is a quick, humorous card game about gathering enough Citizens to your side to stage a glorious revolution. You do this by spreading propaganda, manipulating the media, sending dissidents to the gulag, and using a well-placed assassin or two to enforce your rule. All of this leads up to playing "Revolution!" the game-winning card that is hiding in everyone's 30-card deck.

If that all sounds a bit complicated, it’s really not. All of the rules are written directly on the cards, a player’s turn should take less than a minute, and an entire game averages maybe half an hour.

Each turn you’ll produce citizens by flipping cards off the top of your deck, play as many propaganda cards as you want in order to steal Proletariat from other players, then play one Action card. That’s pretty much it. The most complicated part of the game is the Blitz cards, which work basically like instants from Magic, allowing you to play them at any time. It's also where most of the insanity lies, as people counter each other, or use 'doublethink' to actually reverse wording.

Once you have 15 points worth of Citizens, you can win by playing "Revolution!". That’s the only way the game can end. Of course, all of the other players will be trying to stop you, so be ready for a struggle; planning to predict the chaos is key.

One of the biggest issues that many people have with games like this is that since everyone’s score is visible, it tends to lead to players more or less leaving each other alone until one is about to win, and then everyone dogpiles onto that player. It can be frustrating in Munchkin because it can lead to seemingly-endless games as one player after another reaches for the win and gets cut down.

That certainly is something that happens in Cogs and Commissars, particularly with four or more players. However, there are multiple solutions built into the game that prevents a two-hour drag. For one thing, since everyone will generate Citizens every turn no matter what, it’s unlikely that all of you can be held back from the crucial 15 points you’ll need. The game will naturally run toward its conclusion however hard the players might try to draw it out. Secondly, while there are cards that can negate other cards (including Revolution), there are counters to the counters. Stifle Free Speech simply says to negate another card’s effect, and Revolution itself says that it can’t be countered if you have 20 or more points worth of Citizens (your cause is too great to be stopped!) 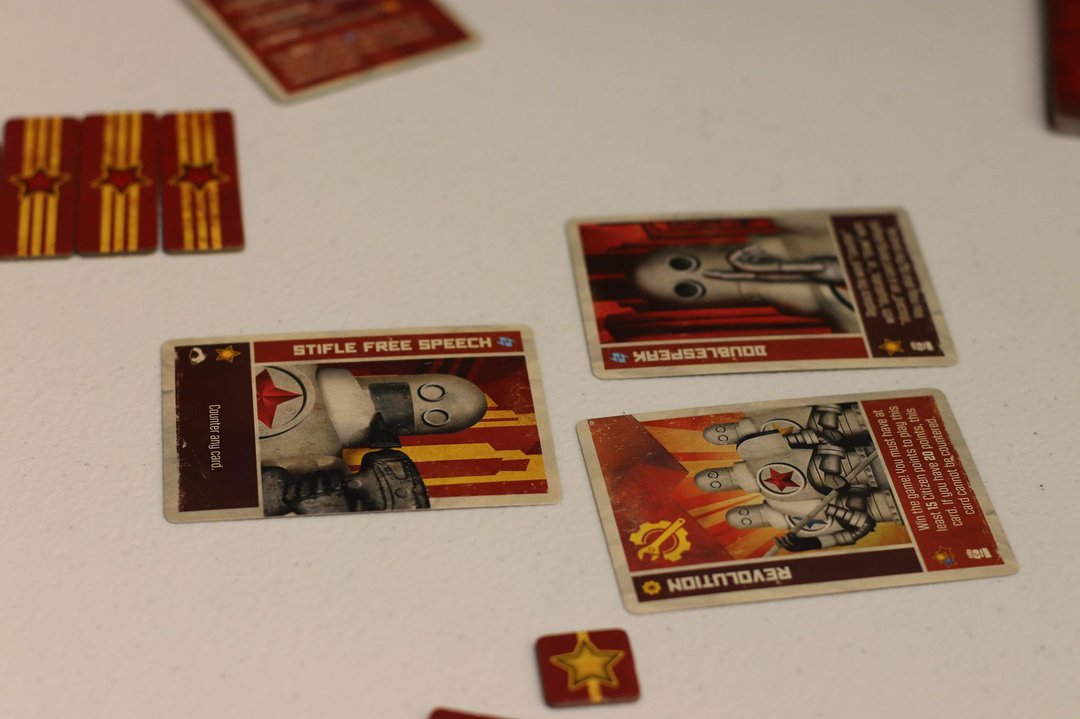 Or you could do what someone did to me: Play something that changes the text on another card, making it so when I tried to negate his Revolution I actually duplicated it and he won twice.

Russian Politics Is Serious Business, But Cogs And Commissars Is Not

Cogs and Commissars would be fine just as a quick, light game to bring out to game night or play with a not-too-serious crowd, but the humor is where it really shines. From the Cold War propaganda art style to the fact that everyone is a robot for absolutely no reason, this game makes it clear from the start that it is not meant to be taken seriously. If you’re not laughing, you might not be playing it right.

This is not to say that it can’t be played strategically, though. In one of our first games we played with a friend who’s a long-time Magic player, and at the end of the game he was able to put together a combo that more than doubled his Citizen count and won him the game in a single turn. Cogs and Commissars certainly isn’t a complicated game, but you can still pull off some impressive and satisfying moves with the simple cards you’re given. It's fun, it's ridiculous, and it is at it's best when people play fast as possible with silly accents. 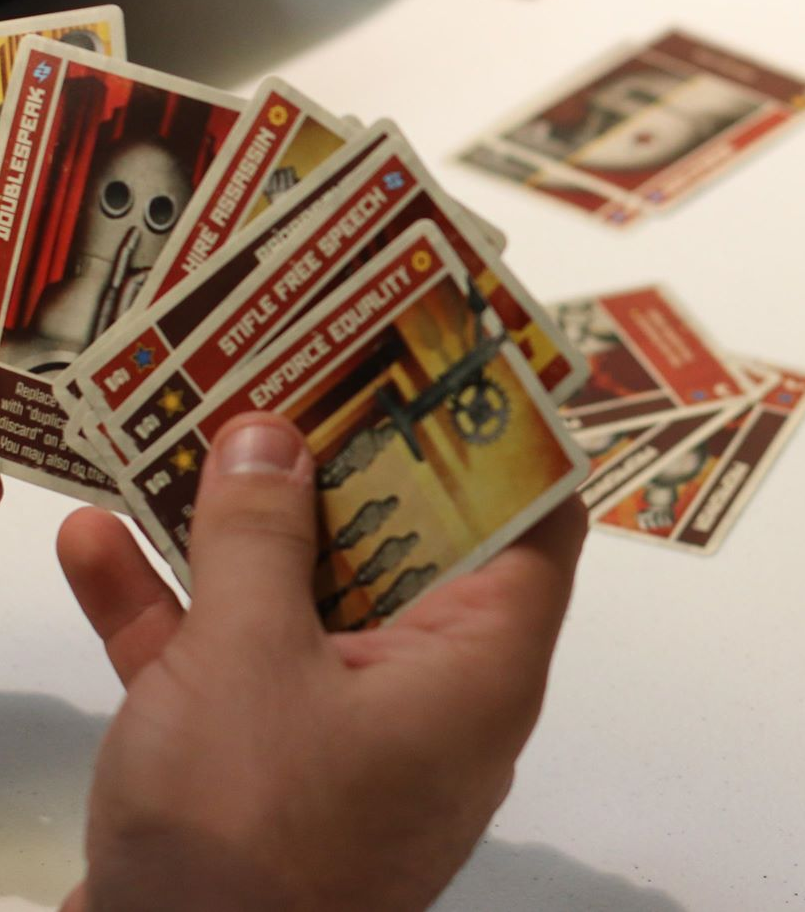 A few of the many ways to... encourage people to join you.

As I mentioned before, it’s rare for a game of Cogs and Commissars to last more than half an hour or so. That means that, in order to really get your money’s worth, it has to be something that you’ll play over and over again. Luckily, they’ve prepared for that.

Cogs and Commissars comes with six different premade decks. Each is pretty similar - though not identical - but the major difference is in the leaders. Playing with leaders is optional, but I highly recommend it, as each has an ability that can significantly change how you play. For example, Gorobotchev simply produces an extra Citizen each turn no matter what happens, but the Artificial Stalintelligence is fueled by sending filthy Bourgeoisie pig-dogs to the gulag. 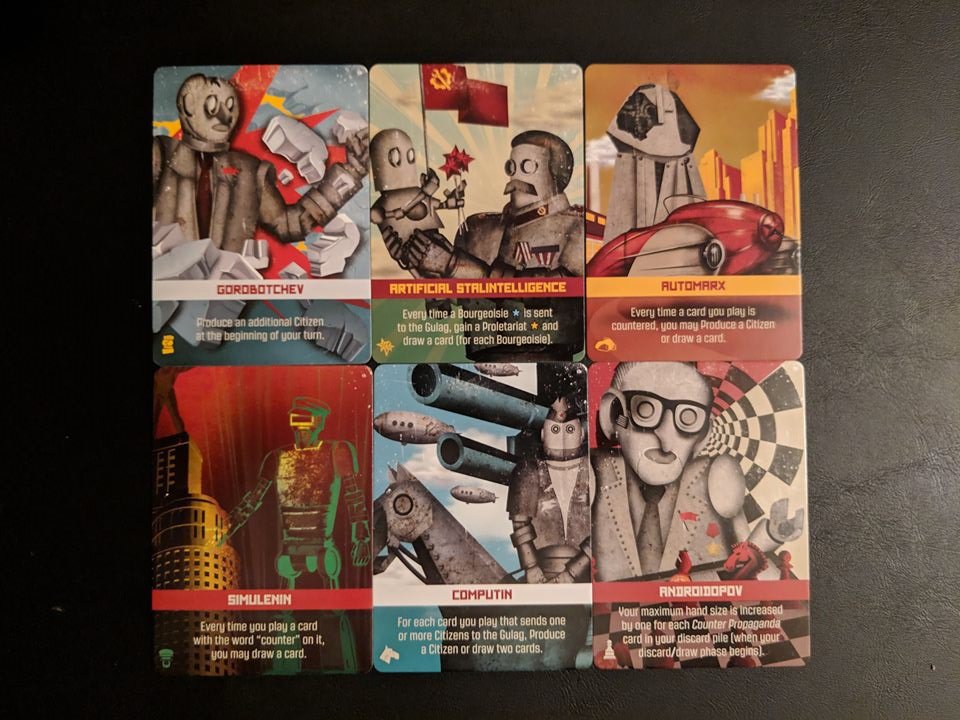 Six glorious leaders who will lead cyber Russia into a new age!

See You On The Front Lines, Comrade

It’s rare that I would recommend a game unconditionally, but Cogs and Commissars is a worthwhile addition to almost any board game collection. It’s quick and easy enough to play with almost anyone (as long as you aren’t taking it too seriously). It’s also bound to get people to the table, even if only to ask “WTF is that"? If there is only one warning, it's a reminder that this game can bog down if someone starts really getting invested in making 'the perfect move'.

With a price tag of only $24.95, which is pretty good by bloodsucking Capitalist standards, Cogs and Commissars is a great choice if you’re looking for a light game to play with friends or family.

For a look into a different aspect of Russian life, check out our review of Russian Subway Dogs!