Dragoon:
The Rogue And Barbarian Expansion 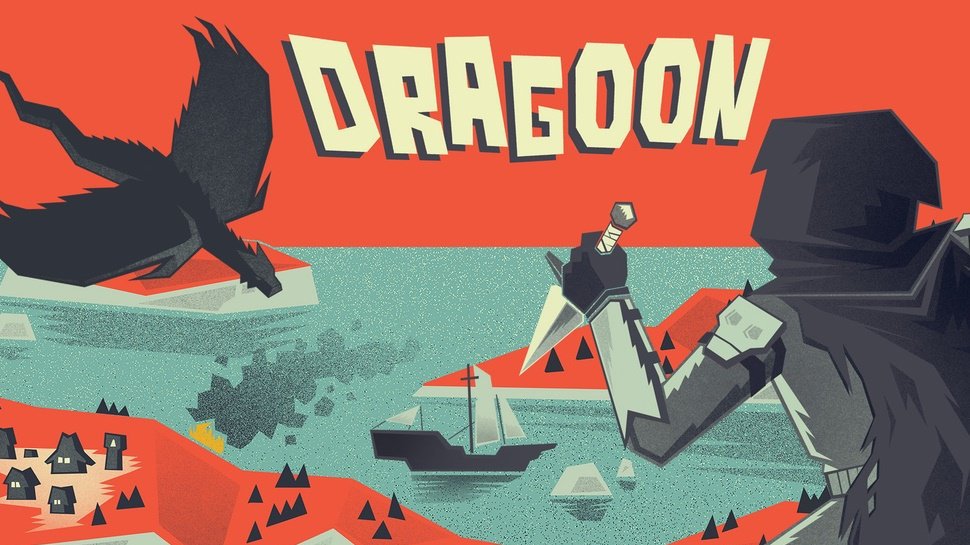 It's bigger. It's asymmetrical. It...features humans in a more prominent role? If you're a fan of the original, new hit board game, Dragoon, then you will love this new addition. If you haven't checked out our original review, you definitely should. The base game of Dragoon is a worthy board game in its own right. Whether you already own it or are looking to get in on a second print run, this Kickstarter may just be what you've been waiting for.

At the time of writing, the Kickstarter for The Rogue and Barbarian Expansion has about a week and a half left on it. If you missed grabbing a copy of the base game, you can snag a pledge level that includes both the base game and a copy of the expansion. And of course, for those of you that already own the original, the expansion is available all by itself. It comes in both its gold edition, with more hefty metal pieces, and its more affordable plastic version (which also looks quite charming on your gaming table). The real question is: what's new that you get in the box? 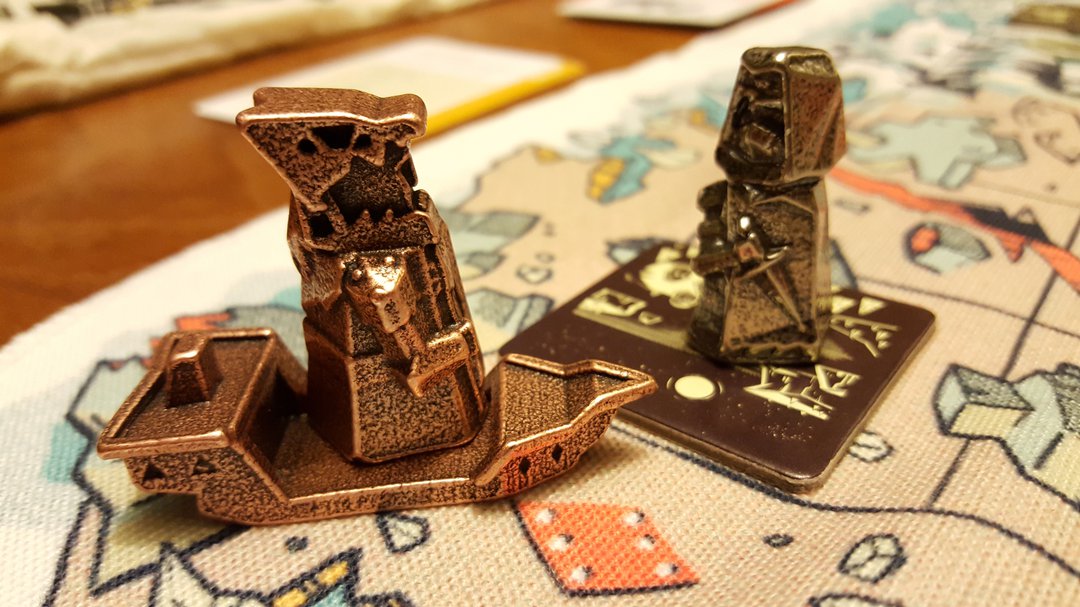 The Rogue and Barbarian are actually designed to look gender neutral, so you can play them as male OR female. I love when board game designers do little things like this!

The main thing to understand about this expansion is that it adds assymetrical play with two human game pieces that play very differently than the original four dragons. This gives you more options to play the game with, but also complicates it. In short, it's a great way to add another layer of complexity to Dragoon. It lets you also play with 6 players which - as we found out in a test - makes the game longer, but fills it with combat and destruction, as everyone plays on the same small six-by-six map.I had the good fortune of attending a randomness in games panel during PAX East, and on that panel was a member of the Dragoon team. One of my big takeaways from a short conversation with him was what the Rogue brought to the base game. While Dragoon does an excellent job of mitigating the luck factor present in its base design, the Rogue adds something even more appealing to some board gamers: the chance to completely control one's own fate. Whereas dragons draw from a random deck of cards, the Rogue gets a hand of several pieces of equipment, four of which she can use at any given time. A Rogue is never lacking for the right tool at the right time (when played properly and planning ahead), and she has a tool for anything. There are tools for zipping across the board, tools for defense and escape, and tools for wringing every last gold coin out of the opposition. You might not have the sheer combat power of the dragons or the Barbarian, but you don't initiate fights by moving through the opposition (only by ending your turns on them). For those more experienced board gamers looking for a little extra complexity and control in Dragoon, the Rogue is totally for you. Oh, and she's also a blast to hand anyone else at your gaming table that wants a change from the standard dragon style of play. 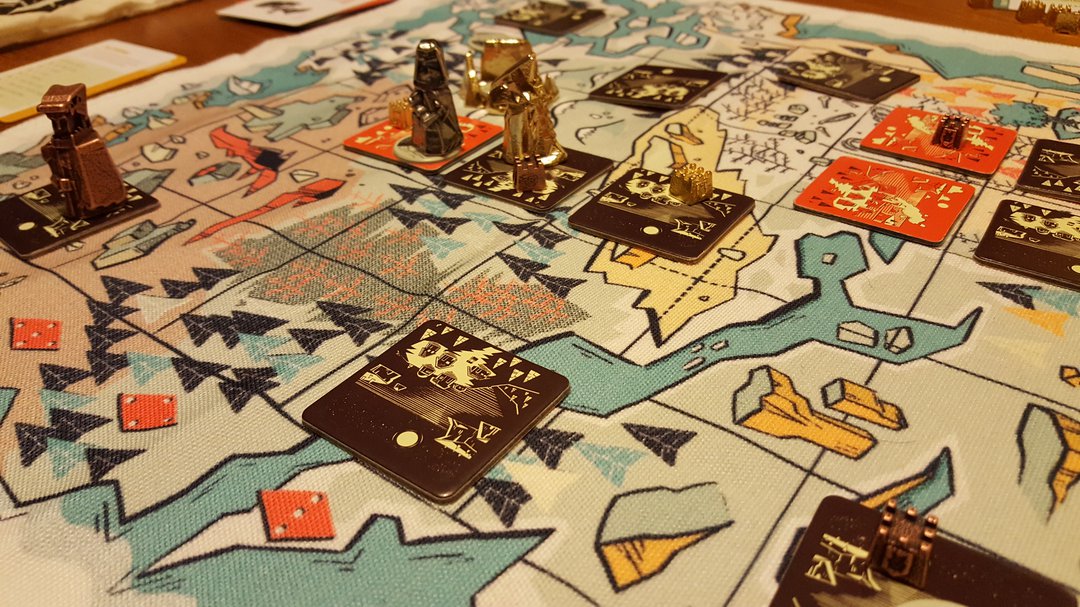 The world will be forever changed by...aww who am I kidding. Point me towards the next shiny pile of gold I need to steal.

If sneaking around and extorting the local populace isn't your thing, maybe sailing around on a ship and raiding is. Enter the Barbarian. His big new mechanic, besides his spawn point (his ship) which can be moved around the edge of the board, is his personal deck of cards. While he draws much like a dragon, he has to level himself up by earning gold and winning fights. Only when the Barbarian is a certain level can he play certain cards, with the powers scaling up to his max level of five; he feels as though you are leveling a Dungeons and Dragons character to compete with the big lizards out there. If the Barbarian ever loses a fight, he becomes so embarrassed that he immediately drops back to level one and starts over (retaining his fortune, of course). He plays somewhere in between a dragon and the Rogue, blunt and forceful but with more overall movement than the average dragon. That mobility with his combat prowess makes him deadly. Underestimate him at your own risk! 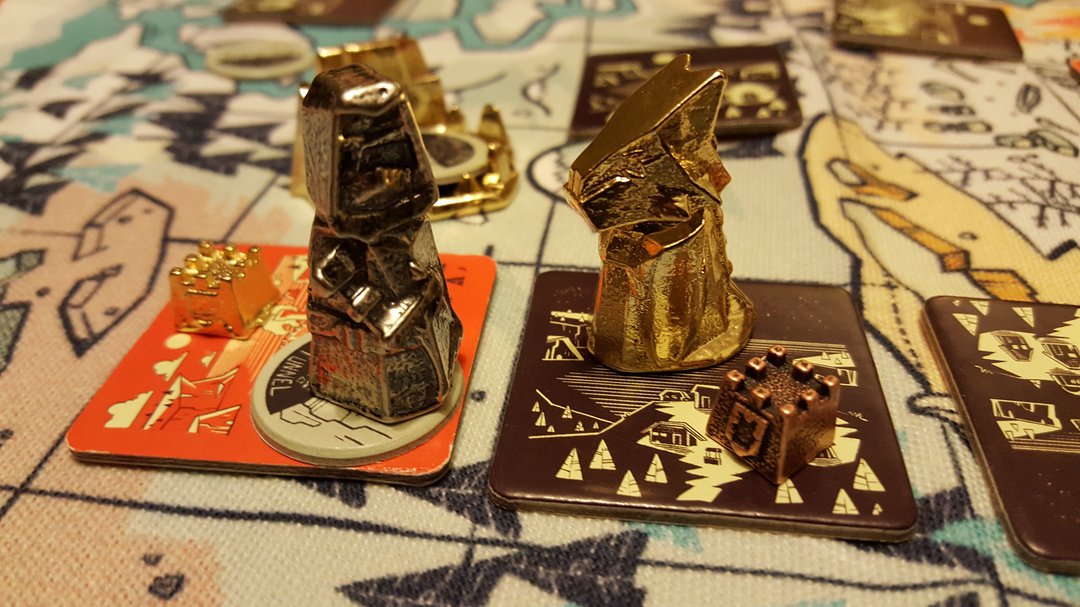 That face when: the enemy dragon is next door but you really wanna steal from his city.

You get a lot for your money in this expansion, and in my opinion it does perfectly what any expansion should aim to do. It takes a solid base game, which is simple and perfect for introducing to board gamers and non-gamers alike, and it bolts on added novelty and complexity that breathe even more life into Dragoon. You can play with any combination of the original and expansion pieces, going up to as many as six players at once now! My favorite moment when playing with Wyatt and Zoë was seeing Zoë, as the barbarian, roll a six in combat against their dragon opponent. They threw down a combat card, their double-sided ax, adding three more to their roll and politely asked their opponent to "get rekt". Wyatt, unfazed as a dragon might be, rolled his own six, tossed down two of his own combat bonuses, and sent the wily barbarian packing. I was glad to be far away from the ruckus, silently enhancing my network of escape tunnels and mooching off the gold both of their tribute cities were producing.

If you don't already own a copy of Dragoon, this is the perfect chance for you to jump on a copy. And whether you're buying the base game for the first time or you own a copy already, you owe it to yourself to pick up the expansion. For any owner of the base game, The Rogue and Barbarian Expansion is a must buy. It adds a solid extra layer that experienced gamers and new board gamers can both enjoy, and your game night will be all the richer for its addition.