Too Real, or Really Good? 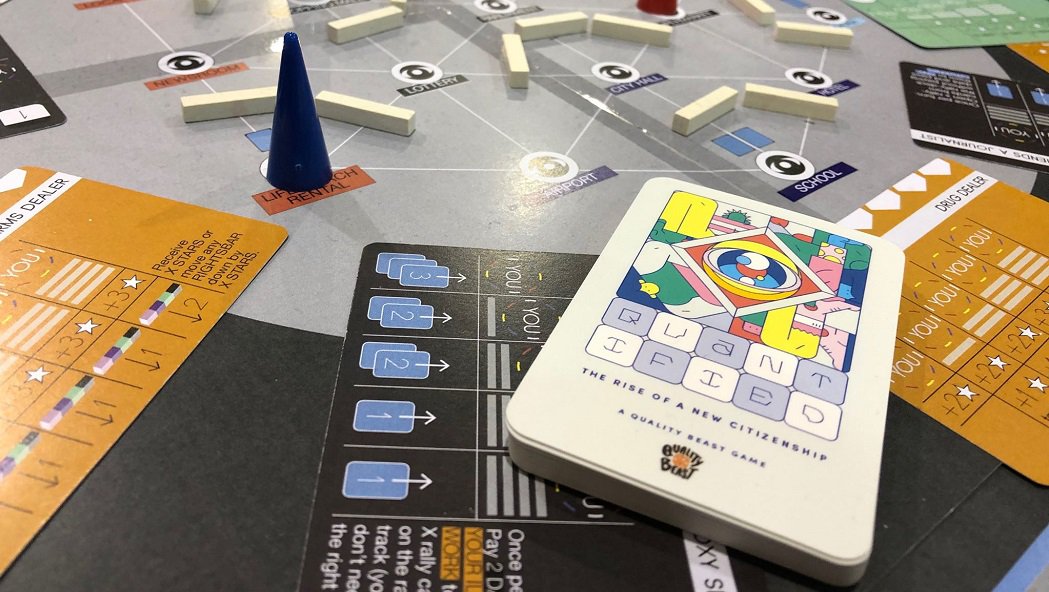 Sometimes the smallest games have the biggest hearts. For me, attending PAX has always been about balancing the big attractions with combing through the smaller offerings. At PAX East, that often means a few visits to the Indie Megabooth, and at PAX Unplugged it took the form of stops in the First Look area. There was one target there that I have been excited about for literal months, ever since I heard about it on the Shut Up and Sit Down podcast, and I’ll admit that I didn’t expect them to travel all the way from Europe to Philly. I had all but resigned myself to being out of reach of this little gem until I contacted the developers at Quality Beast and learned they’d be set up there after all. 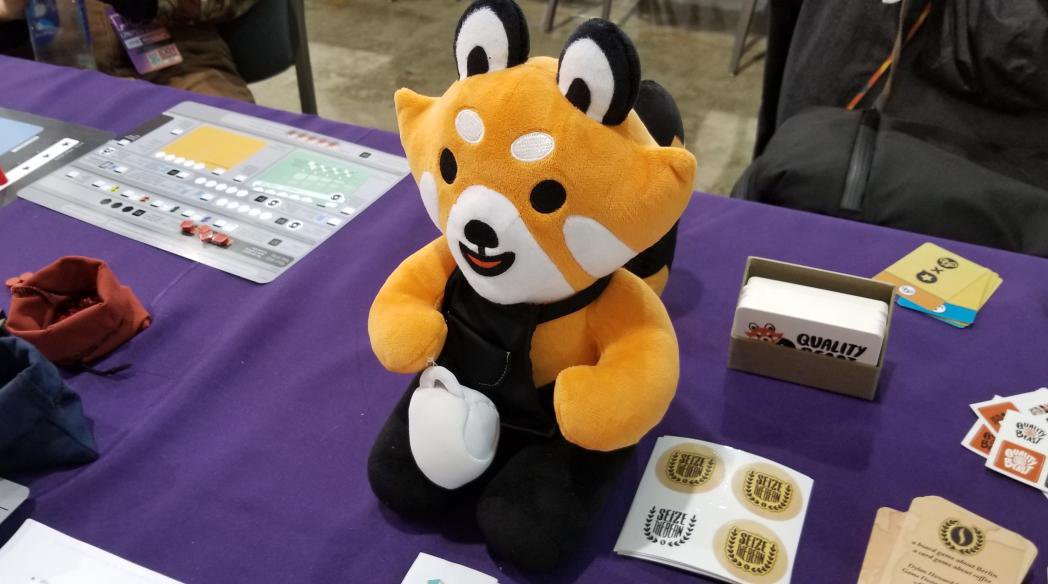 Just look how cute their mascot is!

I was so excited to get a chance to try out Quantified, and it was even better than I'd been hoping. You might be asking yourself: why you should care? Trust me when I say there isn’t a game out that does what this one does, and the wait on it is going to be so worth it.

Editor’s Note: All pictures taken of this game show it in a very prototype state. This board has no art on it yet, so what you’re seeing is a functional, playable skin. This is by no means the final look of the game. The graphical design and layout of the player mats and cards, while also functional, are expected to receive upgrades during production as well.

While Quantified lacks art at this point, the symbology on the components is clear and easy to follow as you play.

Perhaps it’s not exactly fair of me to point out how Quantified has gotten virtually no media spotlight yet. After all, it’s been in development for about four years, and it’s not even expected to hit Kickstarter until at least late 2019. I got a chance to sit down with the developer, Janna Ullrich, who ran me through two games at PAX: one with just the two of us and one later with Wyatt and a friend joining in. I’ll be honest: I’m not even sure where to start talking about this game, because it’s so not like anything I've have ever played before. So let’s just run through the basics here first.

To start off, there are no victory points to mark success or defeat. The objective of this coop game is to get basic human rights granted to all the players before the deck of “bad totalitarian government things” runs out. However, the rights are moveable goal posts along the side of the board; while you can achieve your victory through working the individual players up the social ladder, you can also be an activist for rights to lower those goal posts, making them more accessible for all players. Every player starts off in one of four classes in this dystopian society, from refugee to citizen-with-a-job. What this means is that some players will start with some rights already granted to them while others will start with literally nothing. To make matters worse, this wannabe totalitarian government will try to pass measures every turn to raise those goal posts on all of you as you work to pull them down! Yes, this means a citizen might actually lose rights they had a turn earlier. You didn’t think this was going to be easy, did you?

An example of a challenge players can stop. The card moves along a track, and when the half symbol lines up with its other half, effects trigger. It's both simple and elegant design.

One of the single best mechanical twists of this game is that the rights you’re fighting for grant players actual in-game bonuses. Perhaps the refugee is working with one of the citizens to organize a visibility campaign in front of city hall by completing a special objective card. Success will greatly lower the requirements to one of the four rights: movement, communication, work, and privacy. To achieve this, both players must meet at city hall and the active player must use one of their turn actions to resolve the event. This is where rights come into play: the citizen can rush over to city hall directly, unmonitored and unchecked, while the refugee who lacks basic freedom of movement cannot pass through checkpoints across the board and must travel the long way around. Doing so leaves a trail of valuable, personal data on their movements. More on this in a bit, but sufficed to say that giving a dystopian, totalitarian government excessive amounts of your personal data cannot end well.

Have current, real-world events about the use of your personal data frightened you lately? Are you at all concerned with how much information your phone collects or what a social media security breach means? Maybe headlines about the latest violent attack are fodder for politicians to “bump up security” for everyone’s good. Quantified is a reminder that these events are very real and very related to our personal data. After all, how can you tell who’s a threat and who’s not if you’re not monitoring everyone as much as possible? 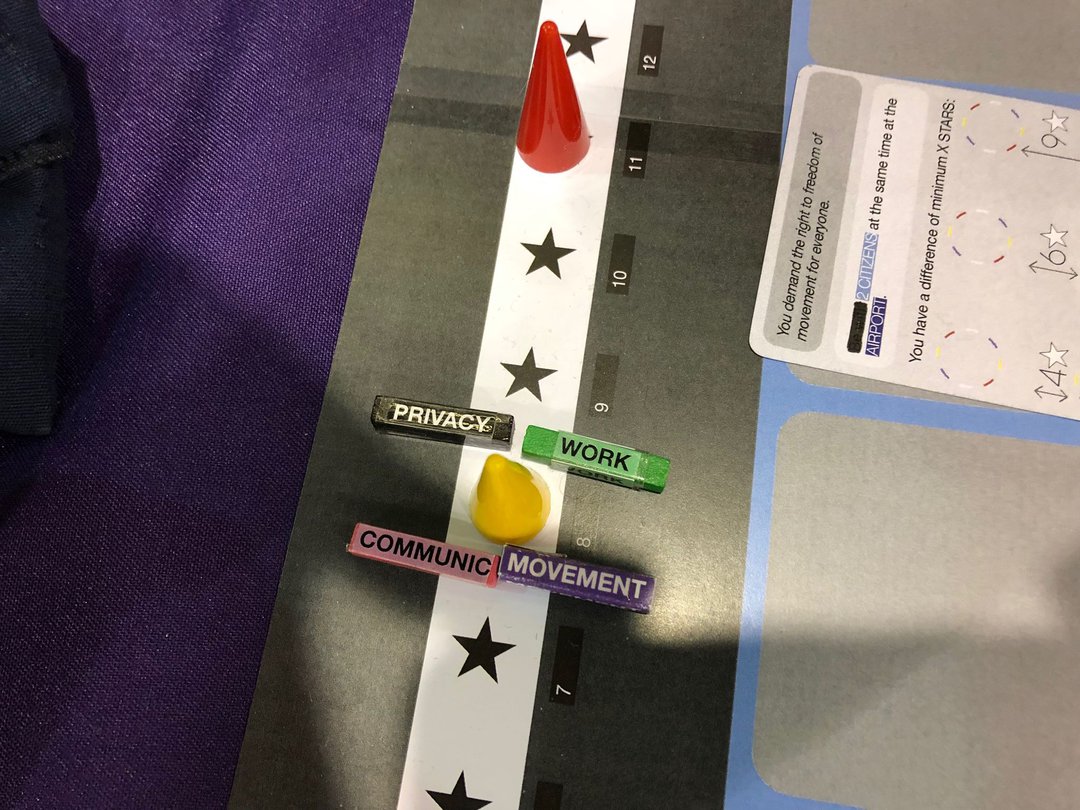 Here's an example of the rights track. In this game, the red player has full rights, but yellow still gets tracked with full penalty and can't hold a legal job.

Most major actions you take in Quantified have you leaving behind a trail of personal data, represented by bags of player-colored plastic crystals. For example, the more spaces you move, the more data you give up. Want to post one of those special objective cards to “Tracebook” so everyone knows what you want them to work on? You’re making yourself pretty public there! Every time you take certain actions, your player board accumulates more and more of these data points. Build up enough of them, and the government may take notice of your actions, assigning you special cards that burn your actions as you’re sent to mandatory reeducation or inflict some other equally disconcerting effect.

If you think you’re being clever by sending a more discreet email to another player (read: pass them an objective card, rather than post it publicly), you actually give them your crystals and they drop them in their bag, potentially placing your data down on future actions! If you achieve the final right, the right of privacy (which no players start with), you get several “encrypted data” cubes at the start of your turn that you can use in place of the crystals, lessening the amount of personal information you leave behind. By the way, that Tracebook post action is only available if you have the right to communication, so toss that on your list of concerns. The way players mix what they can do based on their rights as well as their personal information and how it spreads throughout the game dovetail perfectly with the premise of Quantified, making it feel relevant to today’s world. Perhaps alarmingly so; you’ve been warned. 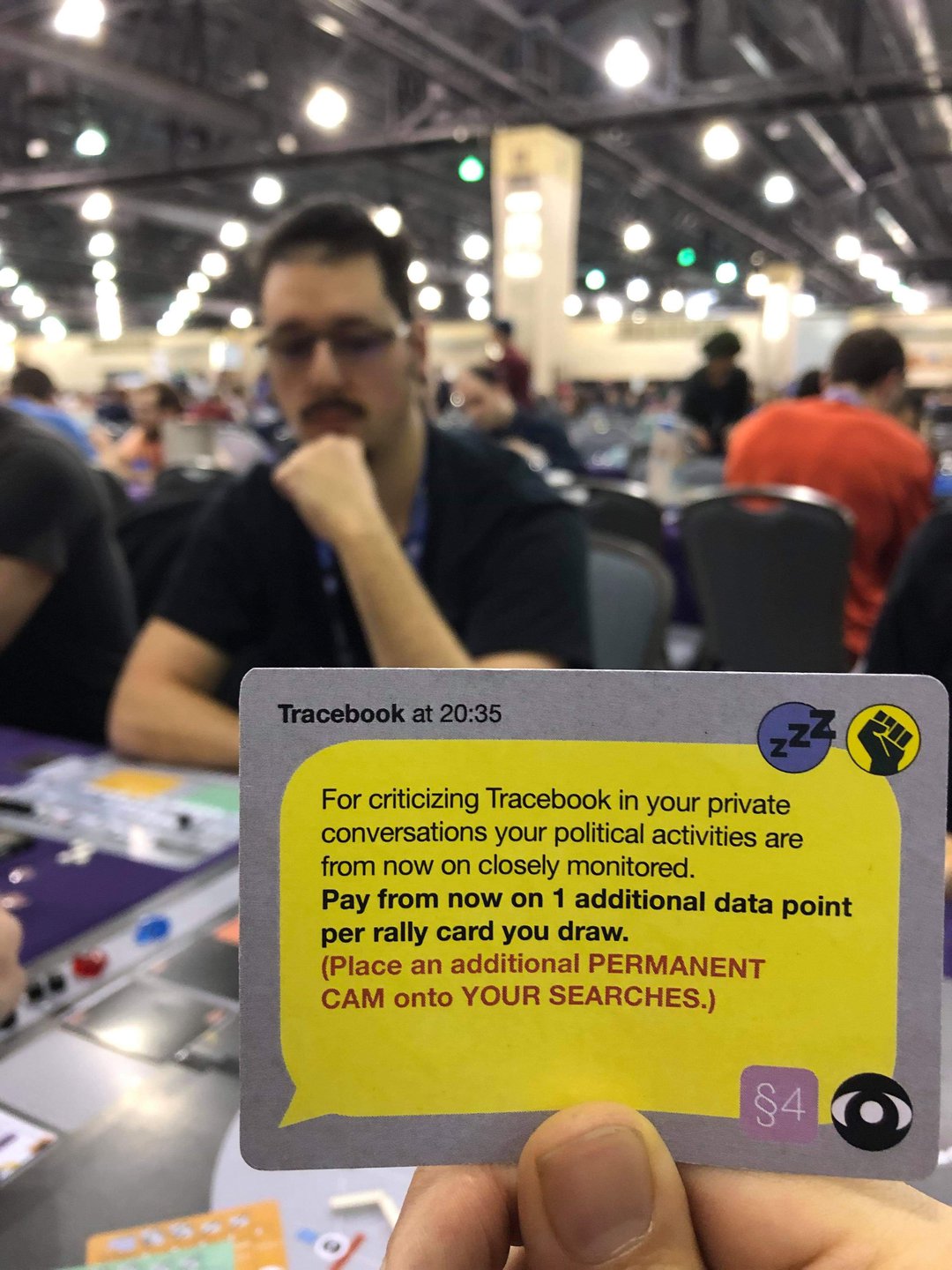 The effect goes off immediately, and you keep the card until someone can remove it. Those extra symbols on the card may cause other bad things to happen to you in future triggers.

It’s not every day a game like this comes along, so of course I asked Janna what inspired it. I was surprised to hear just how close to home it came from. You see, folks who work with Quality Beast come from all over, and Janna lives in Amsterdam; she gets to witness firsthand the plight of refugees stuck in limbo. They aren’t granted asylum at their destination, but their home country is deemed too dangerous to return to. While they are allowed to stay, their rights are extremely limited, as is their access to basic services, including even finding work to support themselves. As she learned more about what was happening with these people essentially not allowed to go home but not allowed to fully integrate into society either, she learned how they were getting by. Sometimes they received help from citizens. Sometimes they made friends with those in a position to offer them services such as legal help. They became very much a part of the community, even as they were made to seem invisible.

Overall, I have to say the integration of all these concepts blends extremely well into a game that is both eye opening and an absolute blast to play. Who you make friends with as allies, what common objectives you work towards, if you can even get people to understand what you want them to help with, these are all concerns you have to balance as the relentless pace of government “progress” continues. While you might think that the refugee player has the worst time with the game, in some ways they are the most interesting to play; everyone has a role, and so even if you don’t have the right to vote (part of the communication right) and block a piece of proposed legislation, your status as a refugee is essential when it comes to completing campaigns for public visibility; some cards become more powerful when the ranking gap between the cooperating players is wider. Everyone is needed. Everyone has a place to fill. 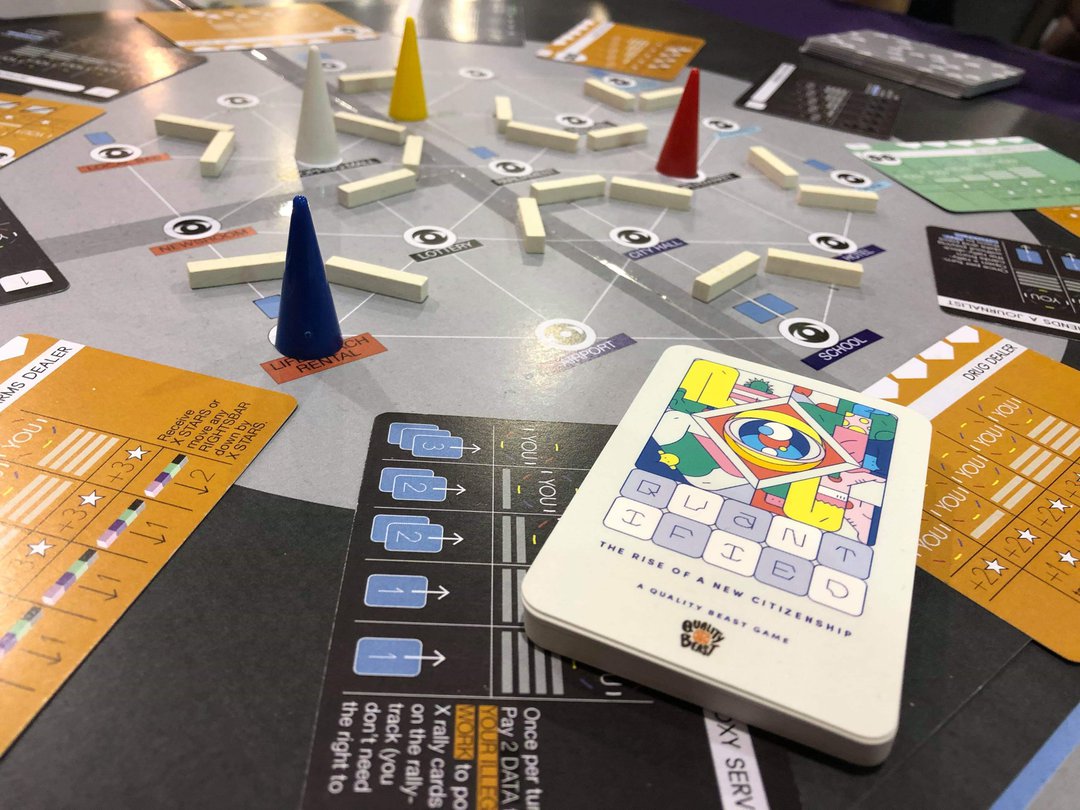 We're told the final art will have much more color to it, resembling this business card.

I still have some small concerns as this game moves into its final stages of development, but I have to state for the record that I’ll reserve them for a future in-depth review. That is due in no small part to the dedication of the designer. Frankly, the polish already applied shines through, and any concerns I brought forth during my demo time were acknowledged as already being under Janna’s watchful eye. For example, encrypted data centered strategies seemed a little too good and made the endgame a little too easy. Difficulty tuning is already happening. I’m also wondering how the game will play without the full four human players or how controlling more than one character apiece will work given the communication restrictions in the game (knowing what’s in two different hands of cards spoils some of the fun). Again, if the work already put in is any indication, I have complete faith that another roughly-year in design will see this game rounded out into the full, exciting design it promises.

At the risk of sounding like I’m trying to pass some dystopian measures myself to install cameras throughout the boardgaming community, this game is on my must-watch list. I suggest you keep an eye out for it as well.