A Less Obnoxious Munchkin. With Ponies. 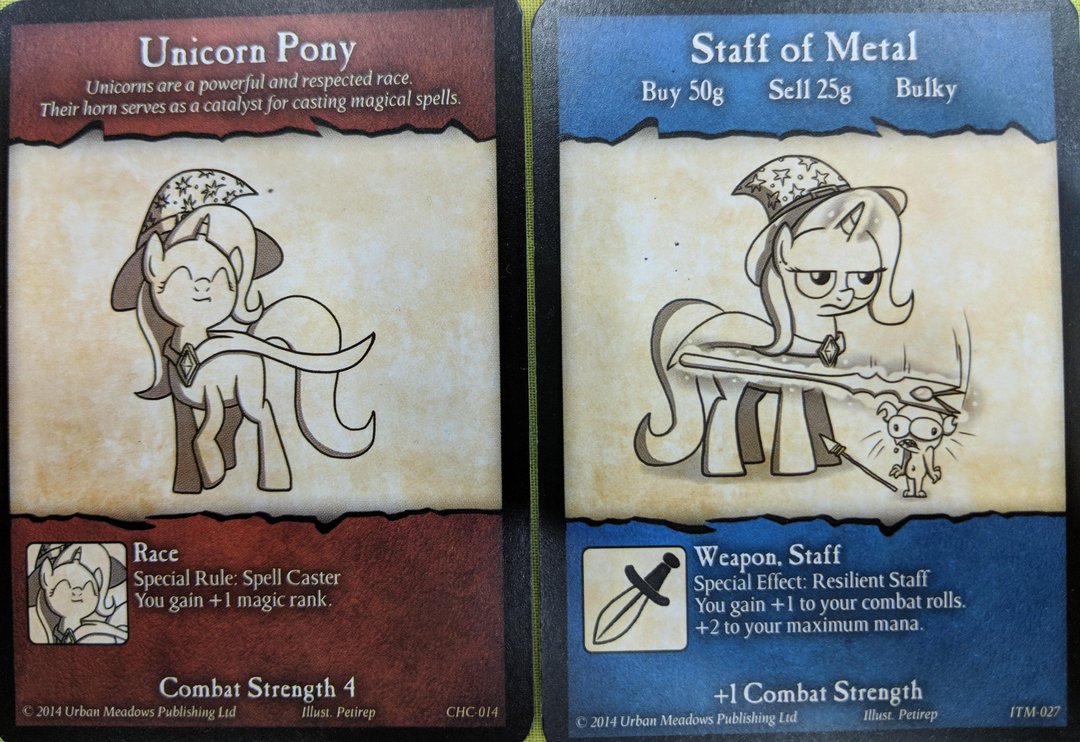 Buck: Legacy is a semi-cooperative dungeon crawler somewhat in the style of Munchkin, but not quite so friendship-ruining. The players take on the role of adventurers for hire, hunting down powerful monsters for fame and money. Each player chooses a race, class, and a starting item. You roll for initiative, and the highest roll becomes the “leader” for that adventure. You shop for additional items, then the party has to fight through a dungeon and defeat the boss. Afterwards, you get one more shopping spree and go to clear a harder dungeon. When the second boss drops, the game ends and the player with the most medals is declared the winner. Simple, right?

I want to point out two things right now. First of all, the name is a bit misleading; this is not a legacy game. You only keep your character for two dungeons, then you’re done. Second, yes, the characters are all ponies. It’s purely flavor and has little bearing on the gameplay, but I did buy it at Bronycon, after all.

My character at the start of the game.

Get In, Loser, We’re Going Shopping

The first of the two gameplay phases is the market phase. Each player will have three actions to use here (four, if you’re playing an earth pony). Those actions can be spent to work for extra money, to rest and replenish mana, or to buy items that are flipped randomly from the top of the item deck. How many items are available depends on how many players there are, and when an item is bought it is immediately replaced. This means that, if there’s nothing you want to buy, you can simply wait and see if something better comes up.

You also have the chance to interrupt players who are lower in the initiative order and buy the item or items they declared. Be careful, though; not only could you make an enemy out of someone who should be your ally, you could also shoot yourself in the foot by weakening your party. Remember, you do still need to be able to clear the dungeon! 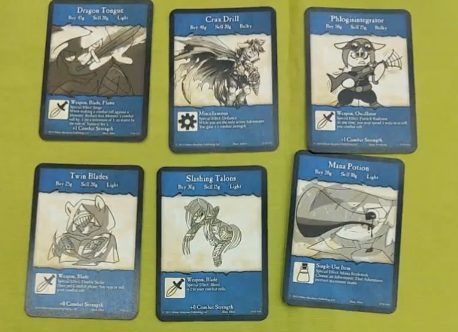 A few of the various items that passed through our shop.

The other thing that’s available in the market is Tesla energy. Tesla costs no actions to buy, so if there’s nothing that you want or can afford, or you’re out of actions, there’s really no reason not to spend the rest of your money on it. Tesla is used to power various steampunk-y items like the Phlogistinator (featured above). Such items are rare, but powerful.

There are also treasure cards which can’t be purchased - they must be found in the dungeon. They’re hard to get, but much stronger than standard items.

Once everyone has used up their market actions, it’s time for a good old-fashioned dungeon crawl.

Hoofing It To The Dungeon

The dungeons are a collection of traps and monsters that the party has to fight their way through. Each dungeon has three inherent stats: a monster power bonus, a Distance, and a gold bonus. Two of those are pretty self-explanatory: they determine how strong the monsters in the dungeon are, and how much extra gold you get for defeating them.

The Distance is how big the dungeon is. Many of the dungeon cards will have a compass rose symbol on them. Each one of those symbols counts as one Distance after the card is defeated or otherwise resolved. After you’ve collected enough to clear the dungeon, you move on to fight the boss.

Combat is pretty simple. You figure out your character’s power and the monster’s power, roll a d6 for each, and see who has the higher total. Other players can help by casting spells, shooting bows, or - if they did not encounter a monster that round - directly helping you. If your character wins, the monster takes one damage, which is enough to kill most things except for bosses. If the monster wins, your character is defeated and must be healed by a cleric to continue adventuring. 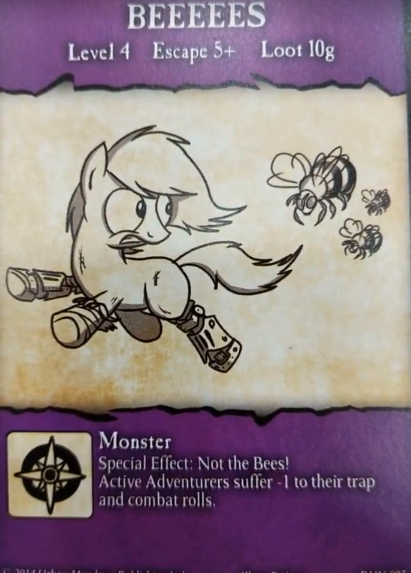 The thing to understand about the dungeon is that the dungeon itself is not the real threat. If your party works together, you will clear it and defeat the boss easily. The problem is that, as I said, Buck: Legacy is a semi-cooperative game. Emphasis on semi.

There are various medals awarded at the end of each dungeon, for things like most monsters defeated or most distance earned. Whoever has the most medals at the end of two dungeons wins the game. So, while you do need to clear the dungeon and will most likely need to work together to do so, you’re also trying to undercut the other players and make sure that they don’t do too well. Unlike Munchkin, you can’t directly harm other players or aid the monsters, so it avoids that end-of-game dogpile. It’s accomplished more by interfering with other players in the market and by withholding your help at a critical moment. It’s a more subtle, long-term sort of backstab.

Buck: Legacy is definitely not a perfect game. Since everything is done with cards, it relies heavily on luck. Also, it uses the same dungeon deck for every level, with the only differences being the monster bonus and the boss at the end. For example, I ran into a swarm of bees while I was deep inside a cave, and you could theoretically hit a pitfall trap while you’re on a ship. It breaks the immersion a bit.

Finally, while the goal is to ensure that you end up with the most medals at the end of the game, your options for interfering with other players are limited. I actually think Buck: Legacy might do better for itself by ramping up the difficulty and becoming a fully cooperative game - which would also be more in line with My Little Pony. Friendship is Magic, after all. 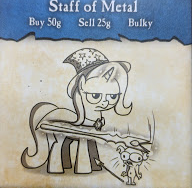 Buck: Legacy is a quick, light dungeon-crawler with great flavor, if you’re into ponies. $50.00 might be a bit steep for what you get, though. They had a special convention price at Bronycon that knocked it down to $35.00, which I felt was about right for it.

If you’ve got a local group of friends who want to do some pony themed dungeon-crawling, then this is definitely the game for you, and could be worth the full $50. If you’re looking for something for a general game night or to bring out to the bar, you’re probably better off keeping your eyes out for a sale.