A Diamond Of Storytelling In The Scrap Pile 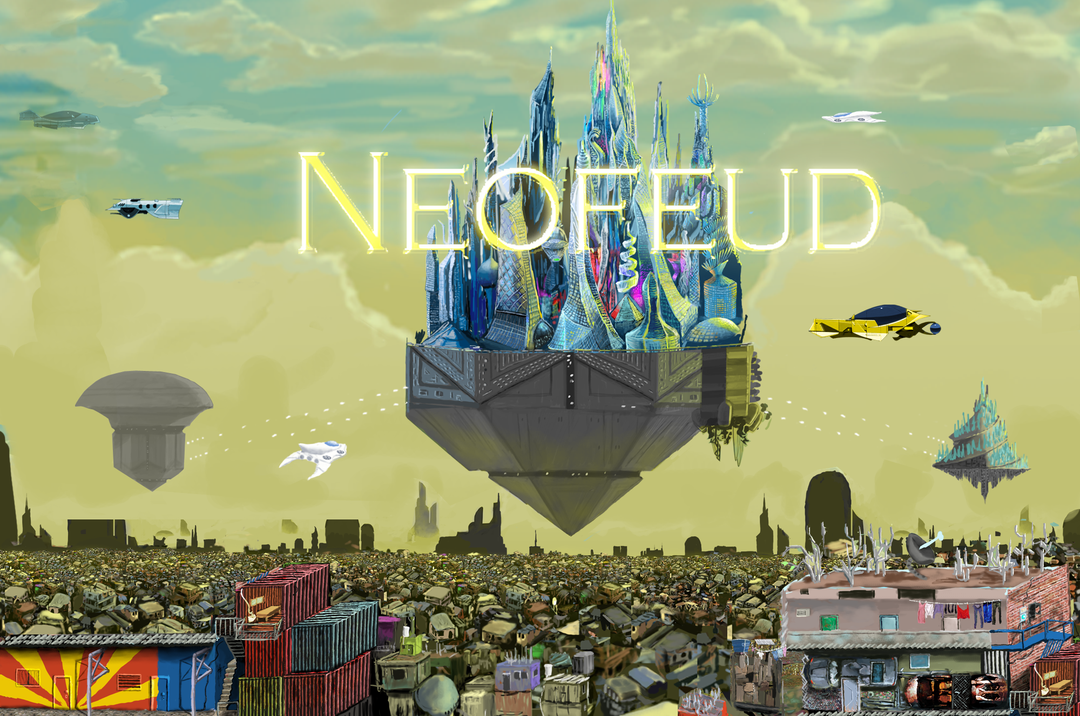 When I play a game, I play to be compelled or immersed in some way. The game has to dig its claws in and drag me in. Walking away has to be difficult or that’s exactly what I’ll do. Neofeud grabbed me in just that way through its gripping mastery of storytelling, akin to how last I binged on episodes of Game of Thrones.

The Good: A Twisting Dystopian Story

Neofeud is a point-and-click game set in a sci-fi dystopia borne of the minds of every prominent science fiction writer from the past century, from H.R. Giger to Ridley Scott. The result is a disturbing yet strangly familiar dystopian society in which social inequality is systemic, the top one percent have their own one percent, and the birth of A.I has resulted in a massive population of unemployed sentient robots. Sound interesting? We're only just dipping our toes.

Beginning by introducing the main character of the story, an ex-cop and currently social worker named Karl Carbon, the story of Neofeud quickly explodes into a story rife with psuedoscience and more twists than an M. Night Shamlyan movie. As a single conspiracy unfolds, others follow, creating a story layered so deep that by the halfway mark of Neofeud’s potential 15-hour game time I found myself questioning characters motives even more than the main character of the game itself. 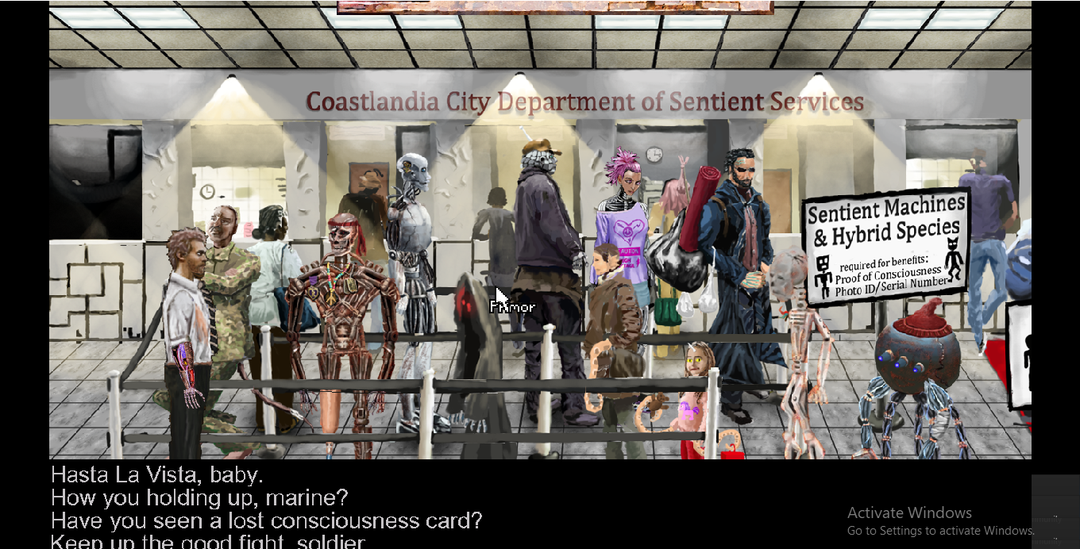 Life’s gotten pretty diverse in this neo-dystopian future. Look at that bum with the office shirt and tie--wait, that's me!

Past endless conspiracies and a spiraling story, the characters of Neofeud are developed so much more than characters in nearly any other game I’ve recently played. Karl and the cast that he interacts with are human to a tee. Interactions with them are immersive and real, a necessity when a majority of the game is dialogue.

I should mention that you won’t easily find yourself without a laugh in this game, either. In an adventure that constantly reminds you how heavy the story is, Neofeud manages to keep the humor up with plenty of over the top pseudoscientific concepts and throwback 80’s movie references. Referencing Terminator to Neofeud's robotic equivalent tickled me just the right way.

Behind the quips and one-liners you’ll hear during the game is one of the best soundtracks you can find in a game. Pounding electronic synth reminiscent of the 80’s and some of the most kick-ass rock n’ roll that has blasted my eardrums had me sitting back at times with the game paused just to savor the listening experience.

Occasionally, I was tempted to put the game down as monotonous reading and clicking carried on perhaps a little in excess. But, thankfully, saviors came in the form of investigative puzzles and tense action sections. A majority of the puzzles revolve around shifting your investigator-like focus to finding items hidden on the screen (in true point-and-click fashion), and action sequences require some quick thinking and creativity to outwit. 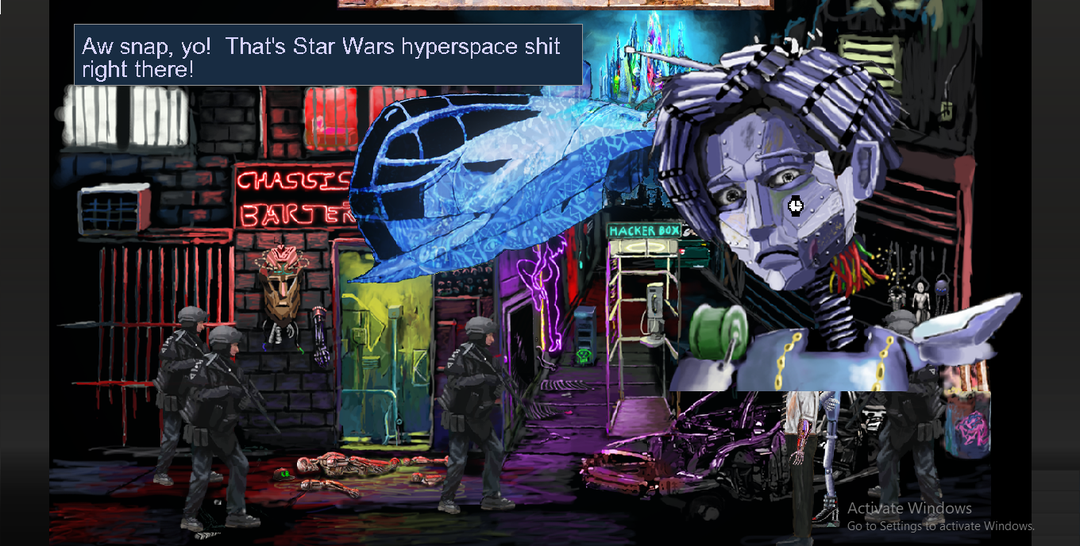 Right?! That’s just what I was thinking!

It is in that same dialogue, though, that the issues in Neofeud bare their ugly, augmented faces. In a game that consists so heavily of dialogue, the voice acting for some characters is lackluster and left me wondering if something was wrong with the characters. A glaring example of this is Karl Carbon, to whom a majority of the game’s dialogue belongs. His phrasing, while perfectly fine at many points, is at times off and makes his character feel unnecessarily split. Perhaps ironically, some of the best voice acting actually comes from the robotic characters!

This all takes place against the backdrop of a dystopian Earth, with its slums on the ground and its floating sky-cities for the wealthy. A beautiful concept that was lacklusterly acted upon, if not outright overplayed. The art style of Neofeud has a strange grungy water-color feel to it which at first suits the gritty feel, but some backgrounds seemed like they clearly had more attention put towards them than others. The overall effect comes off as inconsistent, to say the least, and it was disappointing in the way it broke my otherwise enjoyable immersion in the world. 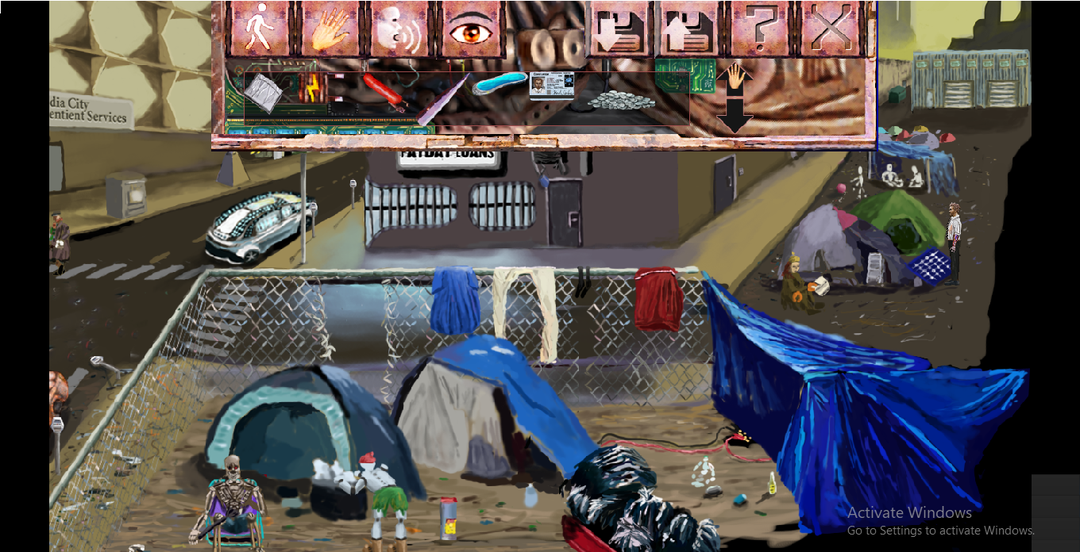 And what retro point-and-click would be complete without a proper, classic inventory system? Makes you feel all warm and fuzzy.

The Result: A Demanding Presence

Neofeud knows what it is doing, and mostly does it right. It focuses on telling its story, introducing a deeply compelling network of fleshed-out characters (even though some lack flesh), and weaving a conspiracy plot that manages to hook me for hours at a time. While it is lacking in some departments, such as some of the voice acting, it more than makes up in the overall experience it delivers. I reccomend it to those that crave plot more than anything, and to anyone looking for a throwback to the golden era of point-and-click, cyberpunk, and mullets.