Review:
Toejam & Earl: Back In The Groove

Is Nostalgia Or Funk The More Powerful Force? 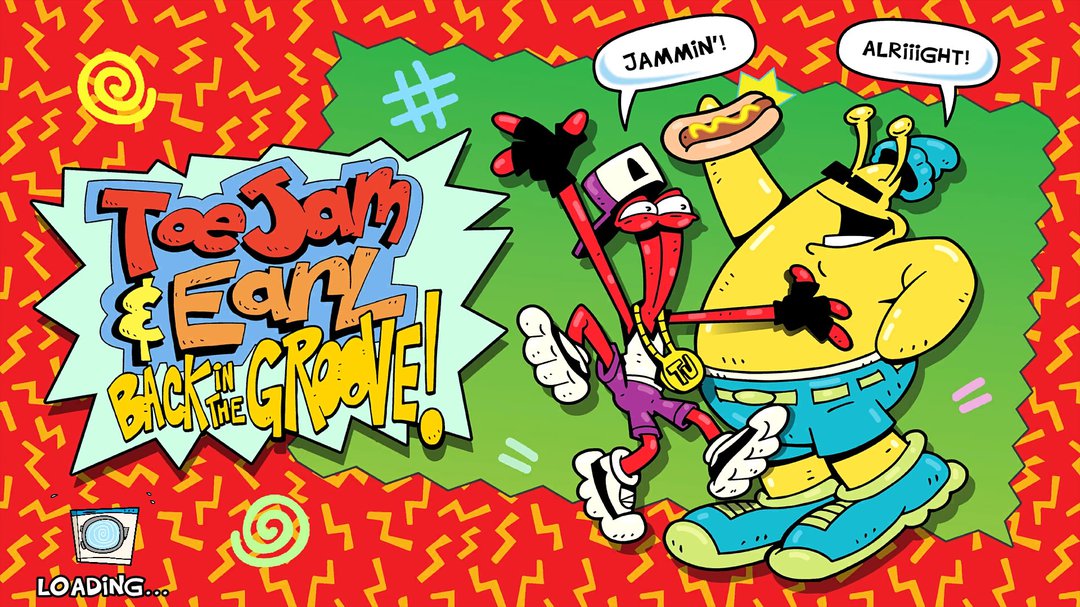 Toejam & Earl: Back in the Groove

It’s time to go back in time to a simpler day. An earlier era of gaming in the age of 16 bits, known only as the 90s. Shanna actually touched on this topic in no small measure with her recent Sonic movie article, more specifically what happens when nostalgia goes wrong. It’s a funny thing, nostalgia. One moment you’re thinking fondly of a childhood happiness, the next you find yourself reexamining that thing and saying, “this really isn’t like I remember.” Or in the case of many recent revivals happening around us, in all forms of media, you find yourself wondering how well your original favorite would fit a remake.Or is it best left in the past? Well the wondering here is over, but did we find our groove again? 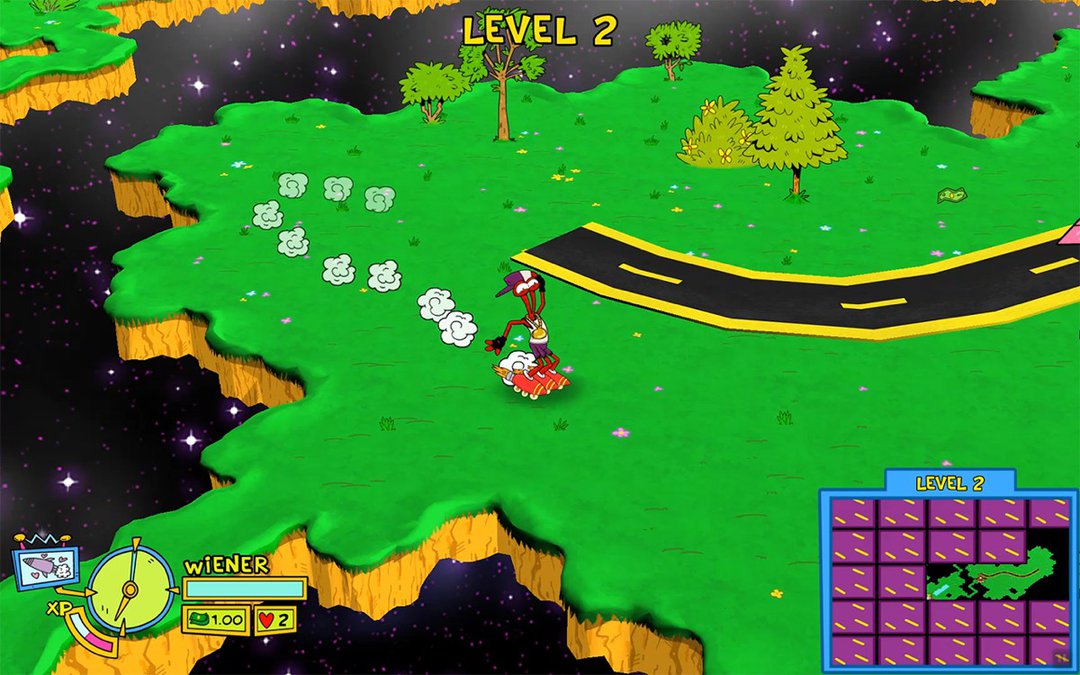 Who Are You Again?

Toejam & Earl: Back in the Groove is the fourth title in a series originating in 1991. I was a mere 8 years old back then, and I found the quite difficult, top-down game that was TJ&E best enjoyed on my SEGA Genesis with the help of a Game Genie. Infinite health, infinite items, the sort of thing a budding gamer used to make a tough game into a play-how-you-like sandbox decades before Minecraft creative mode would become a thing. Thankfully, by the time the side-scrolling sequel came along two years later, I’d taken off my water wings and was ready to tackle the game on its own terms. I dove headfirst into its funky soundtrack and wacky world, and I marveled, even as a child a single decade young, how different (and dare I say better) the sequel was compared to the original. I still have my Genesis and those game cartridges.

Back in the Groove drops us again into something like the original format for the series, a top-down view and powers granted through opening mystery presents, but incorporates bits and pieces of its sequels alongside some modern updates. The premise is as simple as it ever was: reach an elevator hidden somewhere in the level to literally progress upwards to the next one, and if there’s a piece of your smashed up ship somewhere in your current level (indicated on-screen so there’s no guesswork), grab that first before proceeding ever upwards. If you can collect all the pieces to reassemble your ship and escape earth before the seriously uncool Earthlings wreck your day, you win.

Curious about those Earthlings, by the way? This isn’t the kind of game where you’re chased by government agents. In keeping with this game’s zany mentality, you’ll have to fend off everything from cupids shooting arrows that mess with your directional inputs to little red devils that want nothing more than to spear you in the sides. Alone, they’re not that threatening, but you can see how even just the two I just mentioned could be a pain when overlapped. 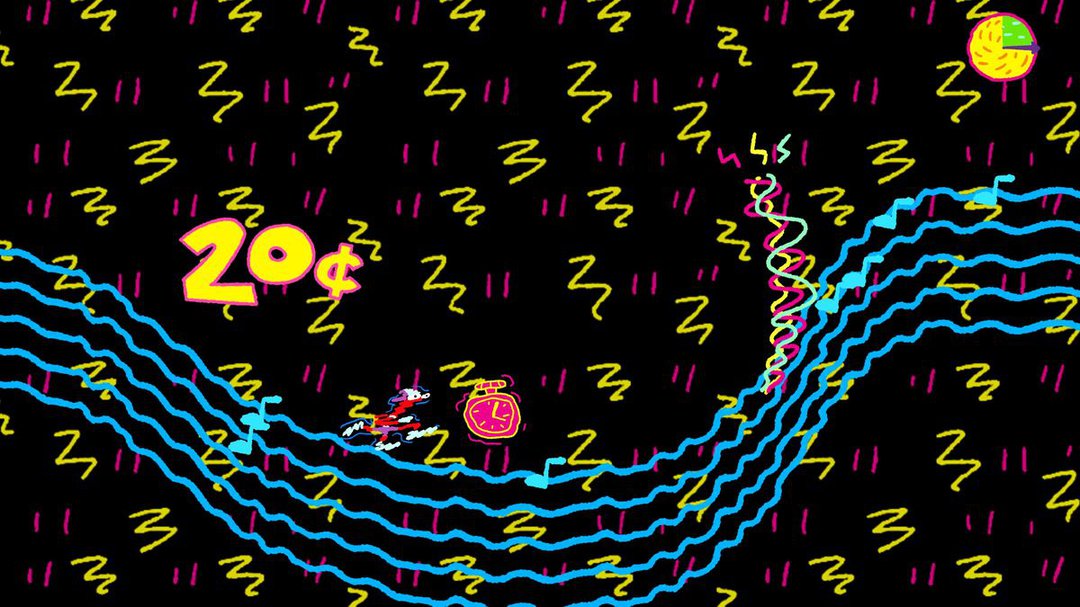 The Hyperfunk Zone returns, and I'm still just as bad at it as I ever was.

In what is clearly an overlap of nostalgia and interesting game design, Back in the Groove keeps one of the original game’s most defining traits: you don’t really have a means of reliably fighting the Earthling enemies. Powerups are granted via presents you find in game, and popping them open grants you a time-limited power. Powers range from mobility items like hi-tops (faster running), innertubes (faster swimming), or Icarus wings (lets you fly past enemies, obviously) to throwing tomatoes (one of the game’s few actual weapons) or boomboxes (stuns all nearby enemies by making them dance). This isn’t a game about blasting anything that gets in your way so much as it’s about frantically tearing wrapping paper off gifts until you find something useful for circumventing your foes, occasionally having the privilege of blasting them directly. Gifts are randomized each game, but after you’ve opened one all similar gifts will be labelled for the rest of the game.

The basic structure of the game is more or less unchanged from the first one over twenty years ago, so fans of what is widely considered the better of the originals will be happy here. What has changed is the addition of some of the side game elements from the second title: secondary characters you’ll be familiar with if you played the old games resurface with the jam challenges, rewarding you with more goodies if you can dance their beats a little like a mini Rock Band level. The hyperfunk zone makes a return, a timed bonus game that plays a bit like an endless runner, rewarding you with massive amounts of extra points, XP, and presents if you can navigate it (unlike the random setups of the main game, this zone never changes so you can learn its layouts). The soundtrack has iconic tunes from earlier in the life of the series, which is a huge plus given the good music the series has. And of course the entire game’s had a graphical makeover in its stylized yet simple, higher-rez look. All in all, everything looks and sounds better than it ever did! 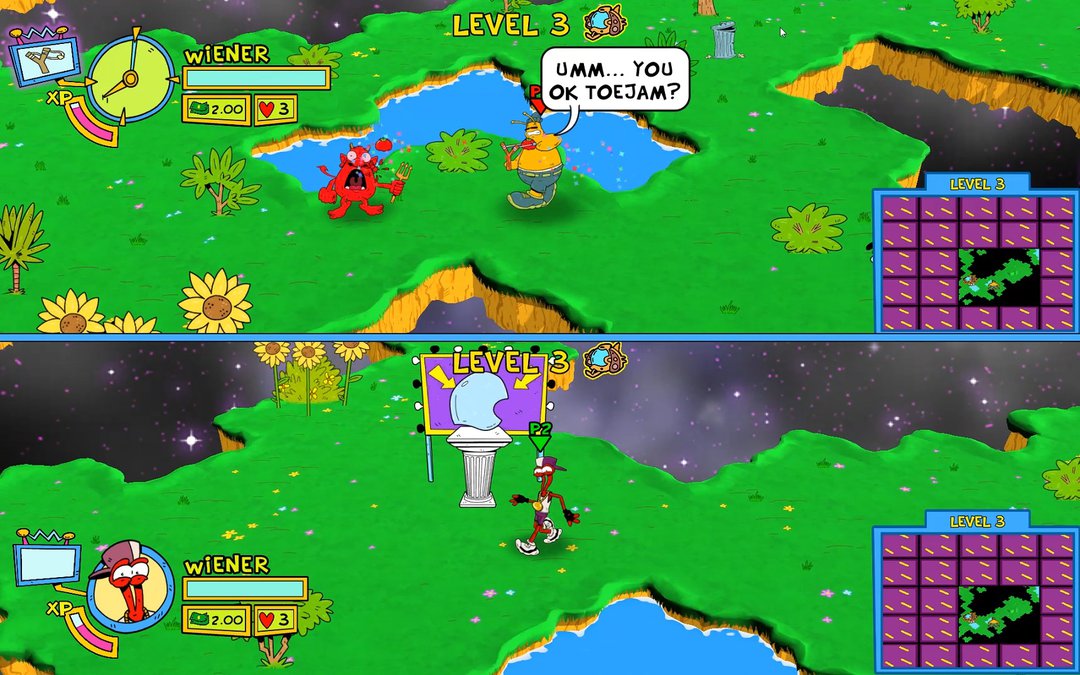 He's doing better than you, Earl. He found a piece of the ship!

TJ&E always supported a two player experience, but its modern iteration takes things one step further. You can now play up to four players, with friends choosing from new or classic Toejam/Earl and several of their friends like Latisha and Lewanda. In perhaps the single greatest design decision of this title, however, the designers have made it so that you can play in any combination of internet or couch coop you can think of. Want to tie in your friend two states away while three of you sit in your living room? You can do that. You and a pal at your house want to link up with a distant buddy and their friend on their own couch? You can do that. Want to invite random internet denizens to pad out your game? I personally won’t use that function, but again, you can do that.

Things remain pretty solid when the game is rolling, as well. If you’re on the same screen with other players, your screens collapse into a larger space. If people in local coop move off screen, they drop into split screen. In a nice touch, if you move off the top or bottom of the screen, that’s the half you’ll control; it takes some getting used to at first, that you’re not always going to be in the same position on screen, but once you come to terms with it, it works quite well. In keeping with taking the best design elements out of prior titles, you can also high five other players to share health and money, and you can drop them presents if they’re in need. The jam rhythm games get more interesting when you mix in friends, alternating between dancing the computer’s beat and inventing one to stump the other players. All in all, the designers understand this is a game you’ll want to play with friends, and they give you plenty of ways to enjoy it with them. 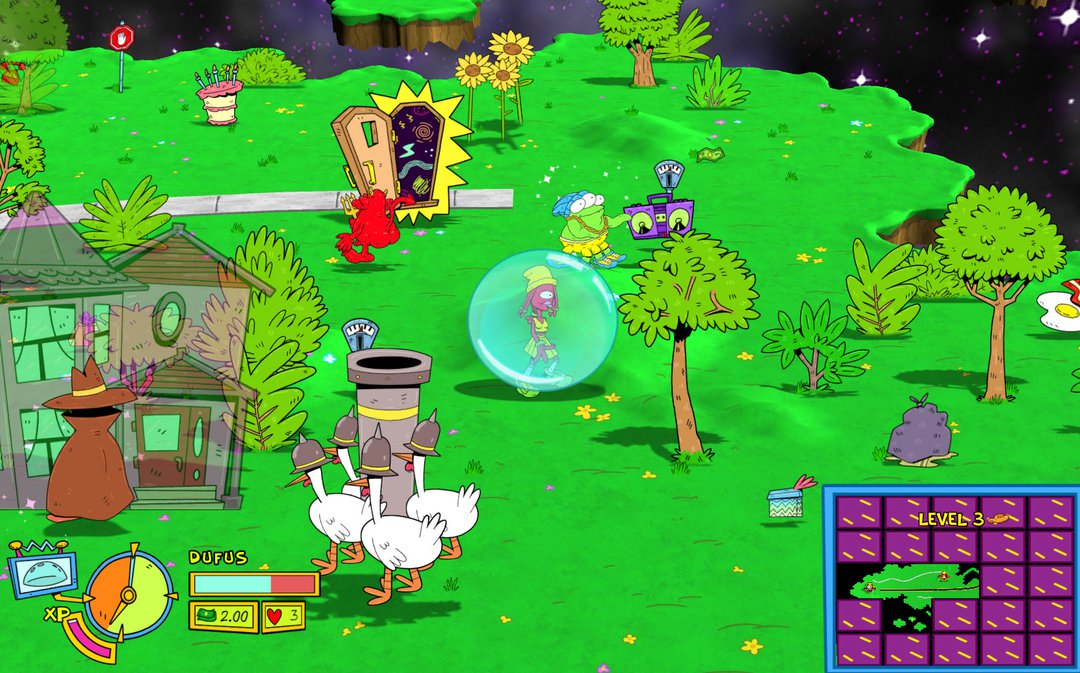 Go ahead. Just try and unpack what's going on in this insane image right now.

The first time you play Back in the Groove, even if you played some of the originals years ago, you’ll probably have about 50% of a clue what’s actually going on at any given moment. Despite sparkles around helpful Earthlings, you’ll probably still struggle with noticing which ones are helpful and which ones are best avoided, or at least remembering what they all do. You won’t bother with the new starting stats or how close you are to your next level up. Even with a healthy dose of confusion, though, the game is fun. In fact, I’m going on record to say that I think it’s more fun when it’s still in that discovery phase.

You see, for all the complexity in enemy groupings, presents at your disposal, and the random makeup of the levels, the formula will start to seem a little samey after a while. At its heart, Back in the Groove is still, for better or worse, a Toejam & Earl game. Granted, it’s modeled after the most beloved of the series and I think it’s stronger for it. The draw here is in the slot machine of what level you’ll be facing next when you step off that elevator; is that sense of exploration, or the thrill of opening power-up presents enough to keep you endlessly replaying the game’s new roguelike formula? Can it help you forgive the somewhat antiquated design when the super sneeze power-up sends you flying off the edge of the level to the one below you just beat, and your friend falls asleep waiting for you to find your way back up to their level again (past many of the enemies you just left behind)? In the end it’s up to you to decide if the charm, style, and excitement of the unknown are enough to hold your attention long-term. 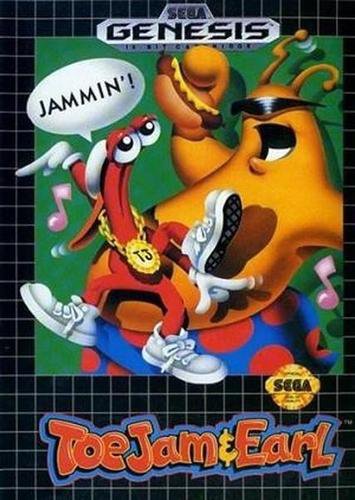 We've come so far since those days. Haven't we?

For what it’s worth, I think this game is nostalgia done right. It’s kept the heart and soul of the originals and all the game elements players like myself love about the classics. Modern quality of life upgrades like save files (say goodbye to writing down passwords) and internet connectivity jive with the system I played on, my Switch, and splitting off joycons for local multiplayer felt natural, like the way this game was meant to be played. I’m glad to have a copy to play casually with friends or while travelling (again, a plus to owning it on Switch), but it’s not something that I’m going to rush home from work to hop on.

In the end, there are other roguelikes that offer much more challenge, diversity in game design, and long term appeal, and Back in the Groove naturally competes with them for my limited playtime; but that’s not why you buy a game like Back in the Groove. You buy it because it’s a TJ&E title. You buy it because of its style, its music, and its loveable characters. If, after my cautions about the repetitive nature of long term play, you still find the irresistible pull of nostalgia nagging at the back of your brain, you’ll probably be fine giving this one a go. Heck, maybe this is the roguelike you’ve been waiting for. Maybe you’ll put 100+ hours into it.

As for me, I can see touching base with this one from time to time for a few laughs. And if Panic on Funkotron gets the remake treatment next, you can bet that if the quality of this modern remake is any indication, I will be all over it like Hawaiian shorts on Big Earl.