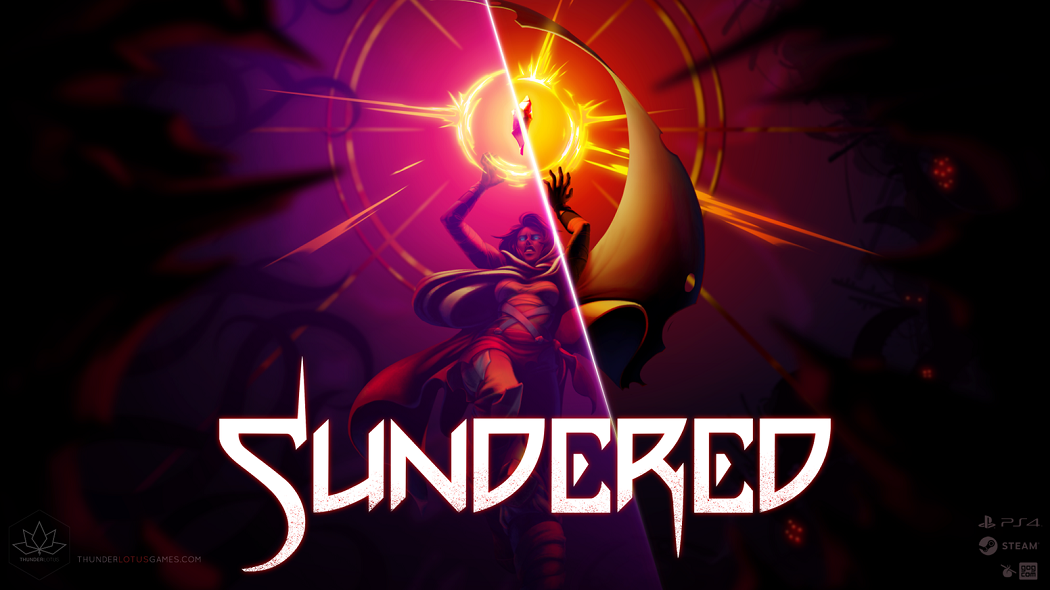 Sundered is a 2d action platformer by Thunder Lotus Games, which is all about that art aesthetic. If that name sounds familiar, it’s because they also created Jotun, which we reviewed a few years back. Much like Jotun, Sundered has beautiful hand-drawn graphics and a penchant for really, really big bosses.

At its core, Sundered is a pretty typical Metroidvania game. You run around a side-scrolling world, explore, fight enemies, get lost, fight more, and look for new abilities and new ways to progress. You also die. A lot.

This is a game that takes a lot of inspiration from the works of H.P. Lovecraft. You fight against monsters and eldritch creatures with too many tentacles. The world itself is alive, and rearranges itself each time you die, to an extent; the overall shape of the world and key locations stay the same, but what’s inside each “room” is randomized. The location names would fit right in as R’lyeh’s neighbors.

Your ally, guide, and weapon in this strange new world is an intelligent piece of impossible geometry: The Shining Trapezohedron. The Trapezohedron also likes to encourage you to embrace the power of Elder Shards, an ancient source of energy. It promises to give you great power by corrupting your abilities - yes, it does use the word “corrupt” - with these Shards.

What could possibly go wrong?

Easy To Play, Hard To Beat

If there was ever such a thing as an accessible Metroidvania game, Sundered is it. The controls are simple and smooth, which makes running and jumping around the ever-changing world a satisfying experience. That’s a good thing, because you’ll be doing a lot of it. I’m going to go for a deep cut here, and say that the movement reminds me most of Fancy Pants Adventure. 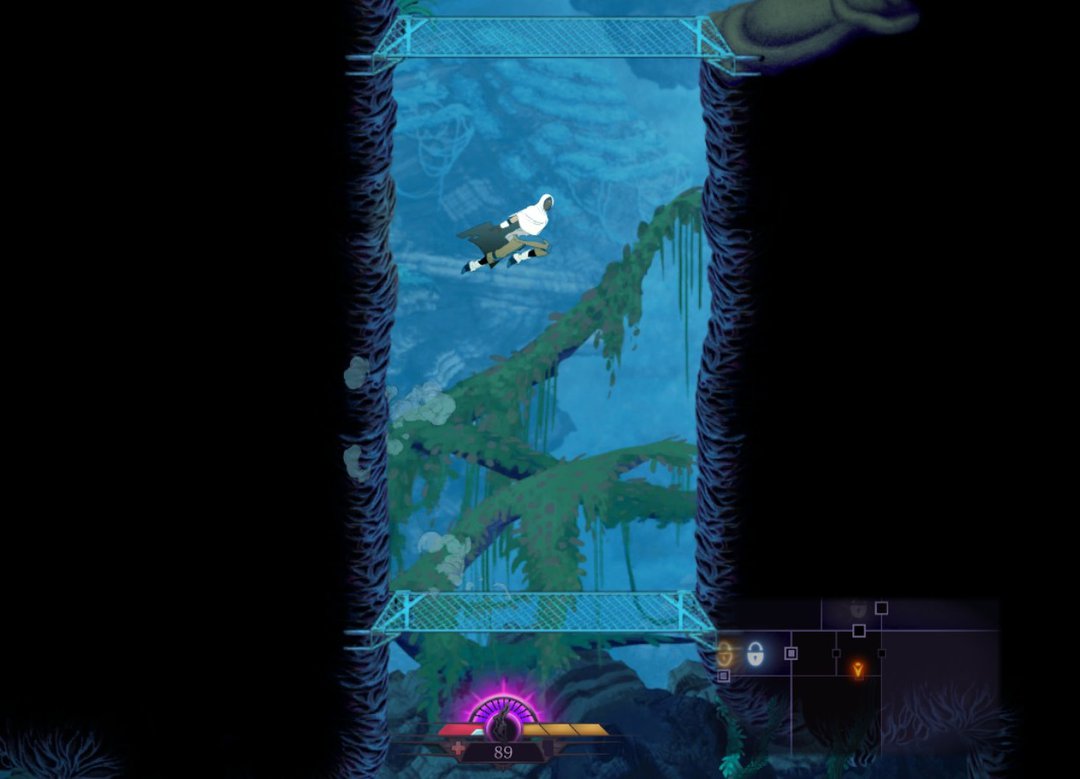 Wall jumps are a staple. If you learn how to jump up a single wall, many new options will open - it is possible!

The combat is similarly straightforward. You’ve got quick melee attacks, which you can use in any direction and chain together, a dodge roll, and a powerful special move. Later on you’ll get a gun and a few new tricks, but those core mechanics don’t change. It’s definitely a case of less is more. The ins and outs of combat are easy to grasp, letting you dive right into the game without worrying about learning complicated techniques and strategies before you can progress. The one caveat I’ll add here is that if you’re playing on computer, you’re definitely going to want a controller for this one.

The fact that it’s simple does not mean that it is easy. Sundered has a punishing difficulty curve, with bosses waiting to tear you down right when you start thinking you’ve got a handle on things. There are also random hordes wandering the world just to keep you on your toes - just when you think you’ve bought yourself a bit of breathing room, you’ll suddenly be attacked by dozens of minor enemies.

The difficulty is offset by an upgrade tree, where you can spend Shards (not Elder Shards, just the normal kind) to improve stats like health, armor, melee damage, and so on. Each upgrade is small, but they add up, and allow for a small amount of customization as you play. Shards are plentiful and upgrades are cheap, and you’re automatically brought to the upgrade tree each time you die, so it doesn’t feel like you’re grinding or going out of your way to level up.

Finally, Sundered does boast some replay value. There are four difficulty levels ranging from Easy to Oh Dear God Why, and the story has different outcomes depending on the choices you make. Well, really just based on one choice, but you have to make it several times. Exactly what the outcomes are, I will leave to you to find out... because I don’t know either.

I'm ashamed to say that I haven't been able to beat it yet...

If you need help getting through, Sundered’s newest update adds four player local co-op to the mix. Local multiplayer is somewhat hard to come by these days, so if you’ve got some friends to play with and you’re sick of Super Smash Bros. and party games, it’s definitely worth checking out.

Honestly, I don’t have a whole lot that’s negative to say about Sundered. It’s a really polished game that’s clearly had a lot of work and love put into it.

If I had one major criticism, it’s that it doesn’t really do anything new with the Metroidvania genre. Unlike Dead Cells, which adds roguelike elements of permadeath and a totally randomized map for each new run, Sundered uses familiar and comfortable concepts and mechanics. Even the Lovecraftian elements are pretty par for the course these days - black tentacles and unpronounceable names, and the chance to be corrupted by eldritch powers. It’s about as vanilla as Lovecraft gets. 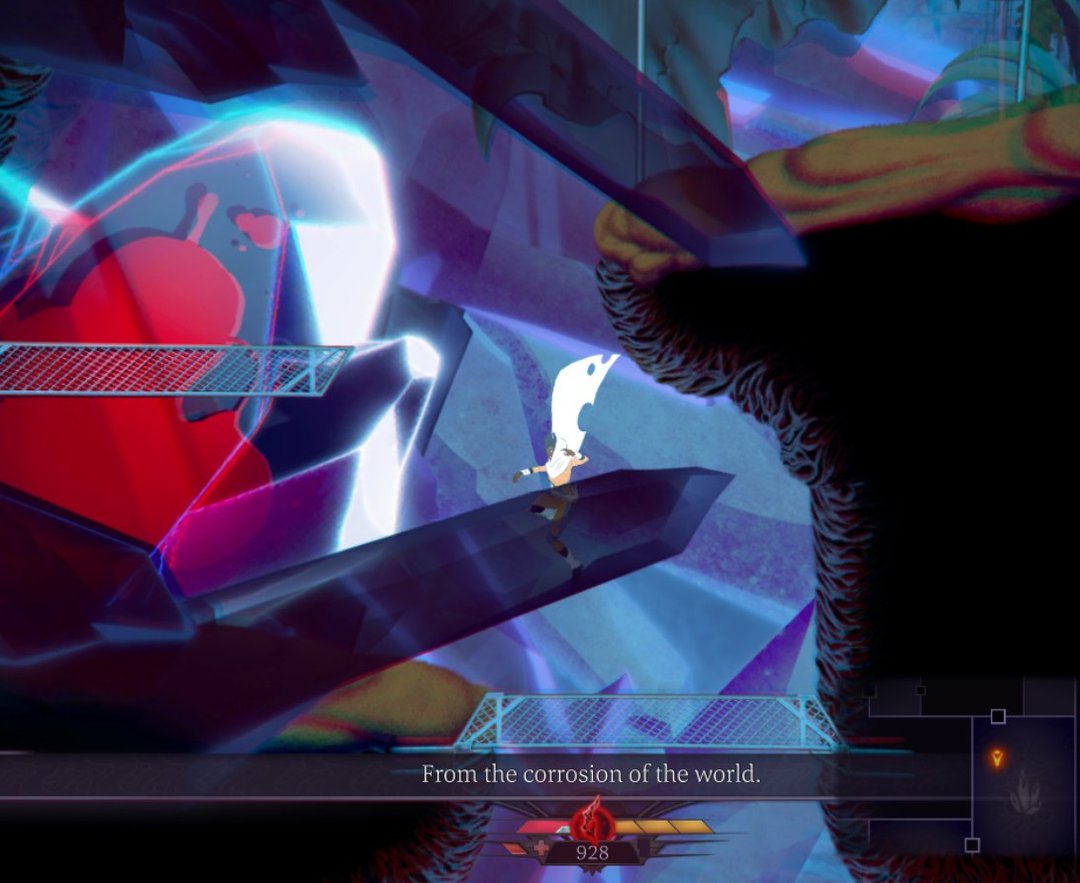 The visuals however are absolutely gorgeous

Speaking of well-trodden ground, you will be backtracking and going in circles a lot while playing. That’s not so much an issue I have with Sundered as with the Metroidvania genre as a whole; you end up spending much of your playtime going through areas you’ve already explored, either to look for something you missed or because you now have a new ability to get through a previously impassable area, or just because you died. Again.

The map is a great help with this. Barriers and important rooms are clearly marked, allowing you to get where you need to go as efficiently as possible, and there are shortcuts you can open to get back to those places faster. Still, I often find myself wishing that there was an Enter The Gungeon-ish option to just click on the map and teleport to where I want to go. While the room elements do keep shuffling around, the changes aren’t dramatic enough to keep things interesting on your third or fourth trip through the same area. Or, maybe I’m just getting impatient in my old age. Who knows?

Resist or Embrace, The Choice Is Yours

Despite my nitpicking, Sundered is an excellent Metroidvania game. It’s very easy to jump into and start playing, but challenging enough to keep you engaged for a good while. It also autosaves for you; when you want to stop playing, all you have to do is pause and go back to the Sanctuary. Or die. Did I mention that I’ve been dying a lot? At any rate, you can pick it up and put it down practically at will. 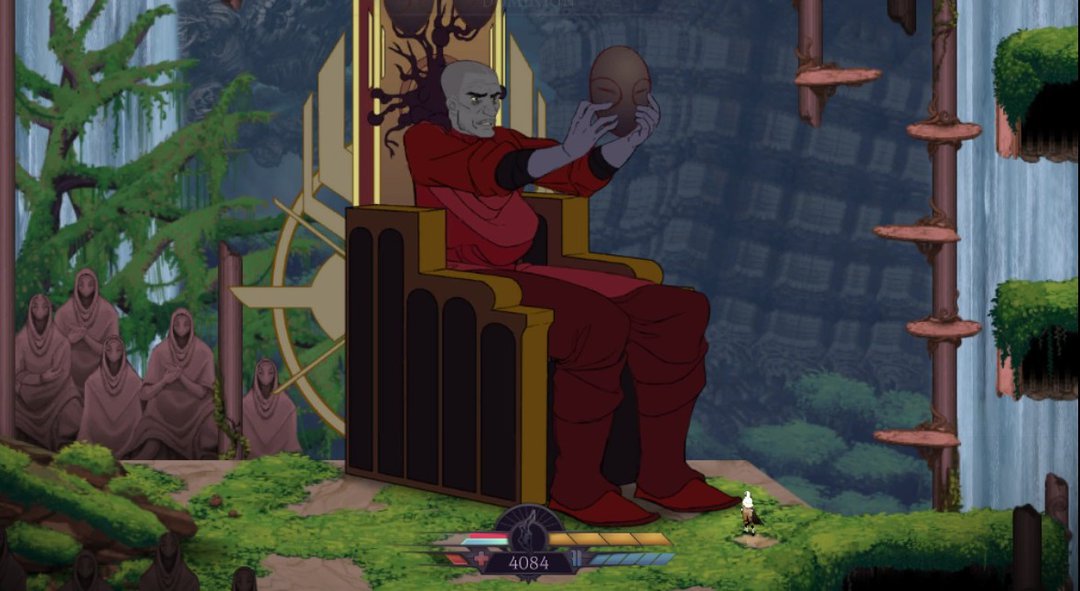 Meet your first boss in the game. I'm sure this is fine.

While I’d recommend buying Sundered on whatever platform you have available - and the review copy Thunder Lotus gave us was for Steam - I think the Switch is going to be the ideal platform for this one. Much like with Dead Cells, the portability of the Switch is a boon to this game, since you may find yourself wanting to play in short bursts between doing other things.

Still, at just 20 bucks, Sundered is well worth it for whatever system you’ve got.