Building a Second Home for Humanity

Before starting this article, I decided to go back and play Terraformers for a few more minutes while I drank my coffee just to get myself in the right headspace. The next time I looked up it was an hour later and my coffee was cold.

The best way I can describe Terraformers is a turn-based 3X game: explore, expand, exploit (no extermination this time around)—sort of like a peaceful version of Endless Space that's shrunk the scale down to just one planet. Your goal is to turn Mars from an uninhabitable wasteland into a thriving utopia. You do it by finding and mining resources, building cities, and (of course) terraforming the planet to make it suitable for human life.

A quick note: I'm not usually the '4x' guy in our little writing team. I usually leave the managing of empires or trade routes to Adam or Wyatt, which makes my appreciation for this game a bit of a surprise! It's an enjoyable take on the genre that strips away a lot of complexity to get at that core "just one more turn" fun I'm always hearing about. 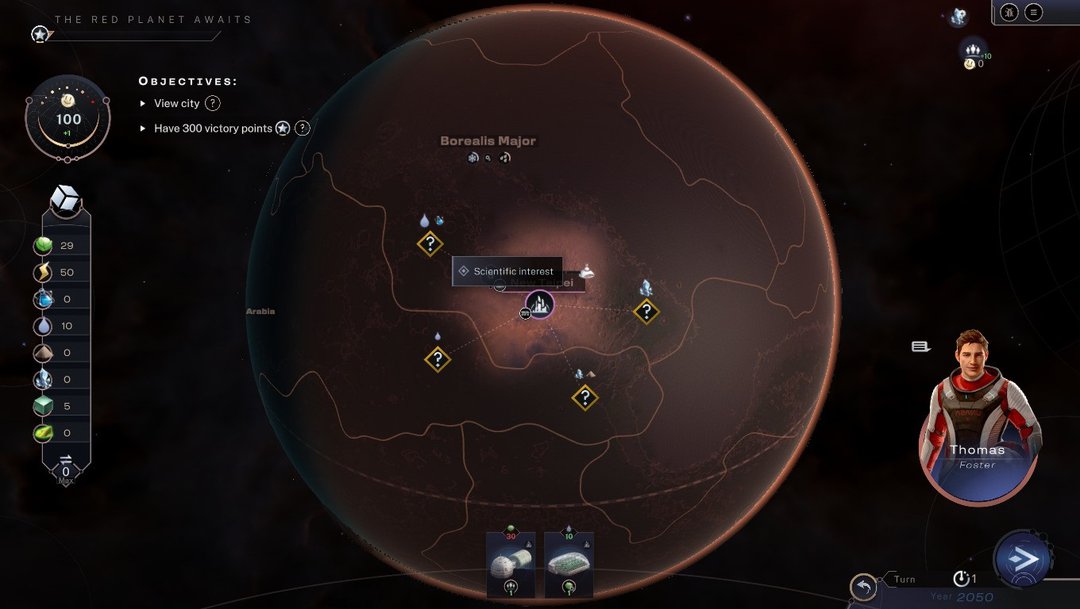 Terraformers has a lot of math happening just beneath the surface, but it’s actually pretty simple to play: Each turn you’ll construct buildings, use your Leader action and any special actions that your buildings give you, and choose one project to add to your reserves. Turns are quick and easy enough that Terraformers can easily catch you in the “one more turn” trap.

There are a few scenarios to choose from, each with different win conditions. You could focus on changing the environment, seeding new life, ramping up resource production, or even on building space-based projects to use Mars as a stepping stone toward future colonization projects. The default scenario combines all of those into a generic Victory Point track, and your goal is to get enough points by doing… stuff.

Picking the right research projects each turn is key.

There’s some light city-building aspects to Terraformers, too. Your buildings are how you get more resources, increase your population, and boost your public support. A well-planned city can get you a lot more of all those things, and help you to expand out into the rest of Mars.

One part of the game that might slip under your radar is the trade routes. You can build spaceports to shuttle resources back and forth from Earth, which lets you swap out your excess resources for others. So, one good strategy is to specialize in producing one or two things (food tends to be the easiest), getting way more than you need each turn, and trading away the extra for harder-to-get resources like tritium. Trade routes are also how you ship resources up into space for your space-based projects. 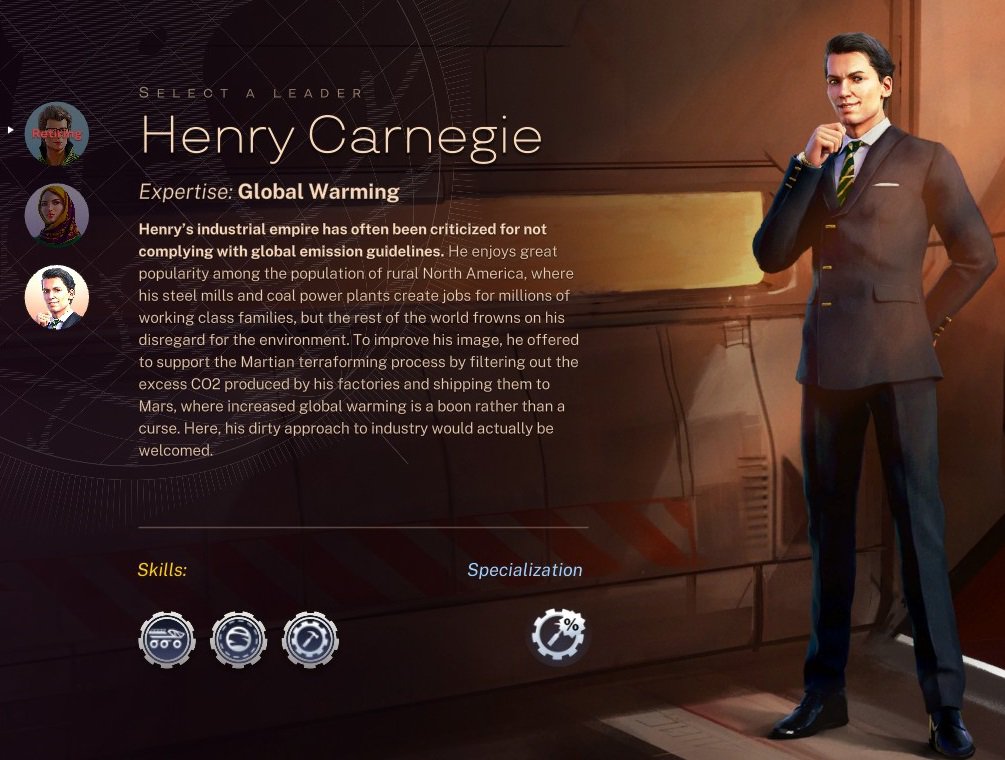 Your leader will rotate out regularly, and each leader has different specialties.

Side note: Terraformers might be the only game in the world where hiring a Carnegie to accelerate global warming is a good thing.

One Downside: Who Knew Terraforming Was So Easy?

One thing I will say is that Terraformers isn’t much of a challenge, at least on the basic difficulty. The only way to lose is to have your Support reach zero. Each turn your Support will go up or down based on how happy your citizens are, and as the game progresses they become harder and harder to satisfy. In theory that puts you on a timer as you struggle to keep up with your citizens’ ever-increasing expectations. But, so far, I haven’t even come close to losing.

Fortunately, they have added custom difficulties during early access; I can appreciate a relaxing, low-stakes game, but the ability to adjust the gameplay adds a lot of replay value. The more settings they can add to Terraformers, the better chance both beginners and experts are going to find something to love here.

If I had to add one more note of caution: Terraformers is good, but this isn't Civilization or Stellaris. The scale is a lot smaller, and a single scenario a lot shorter as a result. I don't think this is exactly good or bad, but diehard fans of the genre shouldn't be expecting to lose hundreds of hours all at once into learning each and every system of this game. For me, that worked out great! For 4x experts, just know what sort of game you are buying into. 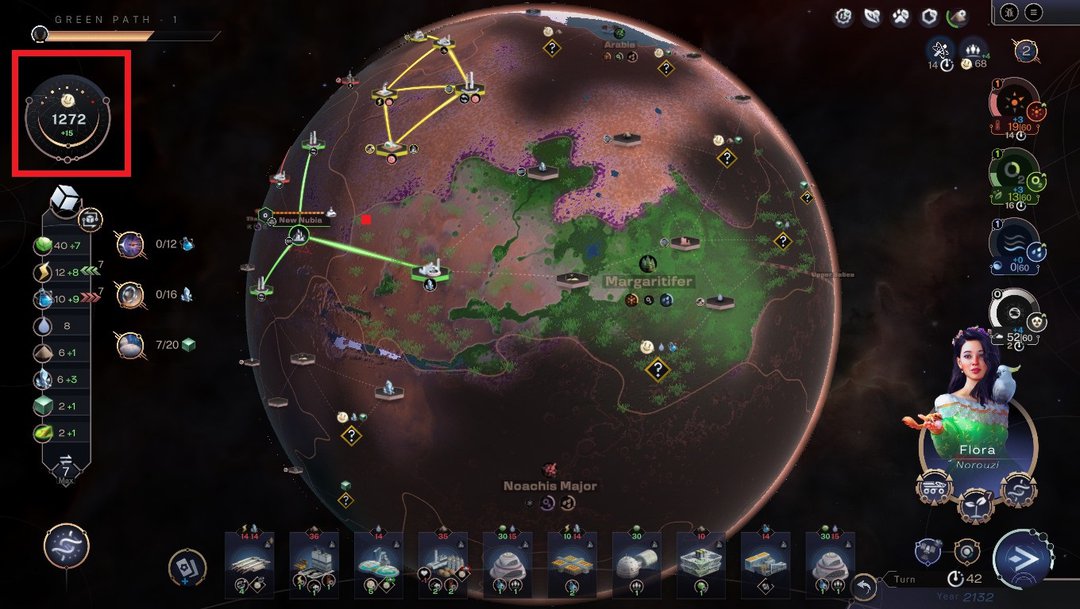 This is pretty typical: More than halfway to a victory, and my Support is well over 1000 (and still climbing).

Terraformers is currently in Early Access on Steam and GOG, going for $19.99—well worth it at that price. There are also plans to bring it to the Epic Games Store and, more importantly, the Nintendo Switch: This would be a great game to have on the go, and it won’t be straining the Switch’s limited graphics. Remembering that this game is still in early access and is still adding new content is exciting to me, since the game already feels complete as is.

Overall, I’ve enjoyed my time with Terraformers quite a lot. It has a simple, engrossing gameplay loop that really hooks you into the “one more turn” trap. As someone who usually isn't drawn to the genre, I really enjoyed my time getting sucked in.

If you’re looking for a meaty challenge then I’d suggest looking elsewhere. On the other hand, if you want to spend a few relaxing hours pretending that humanity will ever have its s*** together enough to fix the environment and colonize other worlds, then a game of Terraformers may be exactly what you need. 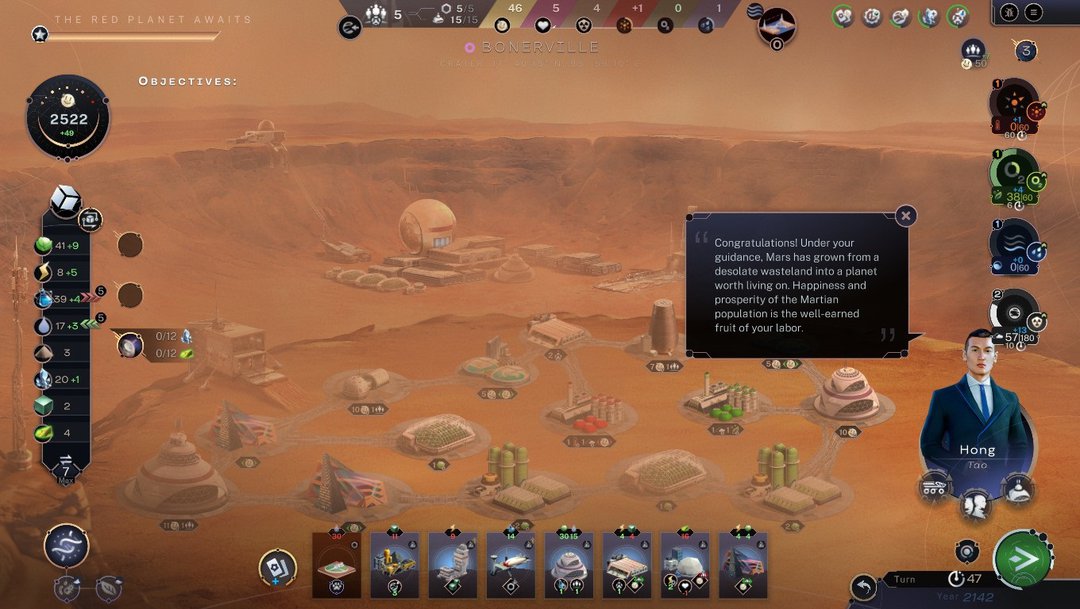 …What do you mean work started an hour ago?