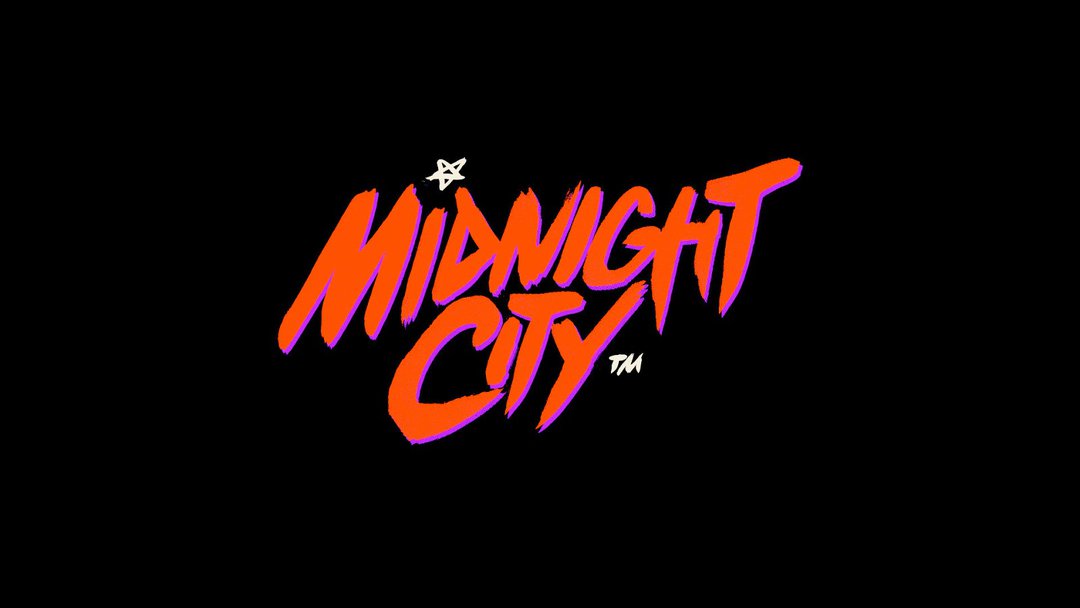 Midnight City seemed to pop up out of nowhere this year. The indie publisher flooded my Twitter feed all at once late last year with huge games like Gone Home and Costume Quest 2 suddenly under their belt, and their appearance at PAX this year was no different. Their booth showcased four different games, with a fifth not far off in its own booth. There was an air of excitement around the booth about getting these games shown; from the enthusiastic PR guys to the developers themselves, everyone seemed really excited about having their games played. Midnight City likens themselves to a record company. Their goal is solely to provide all the gritty business and PR work so indies can do what they do best: Make awesome games. 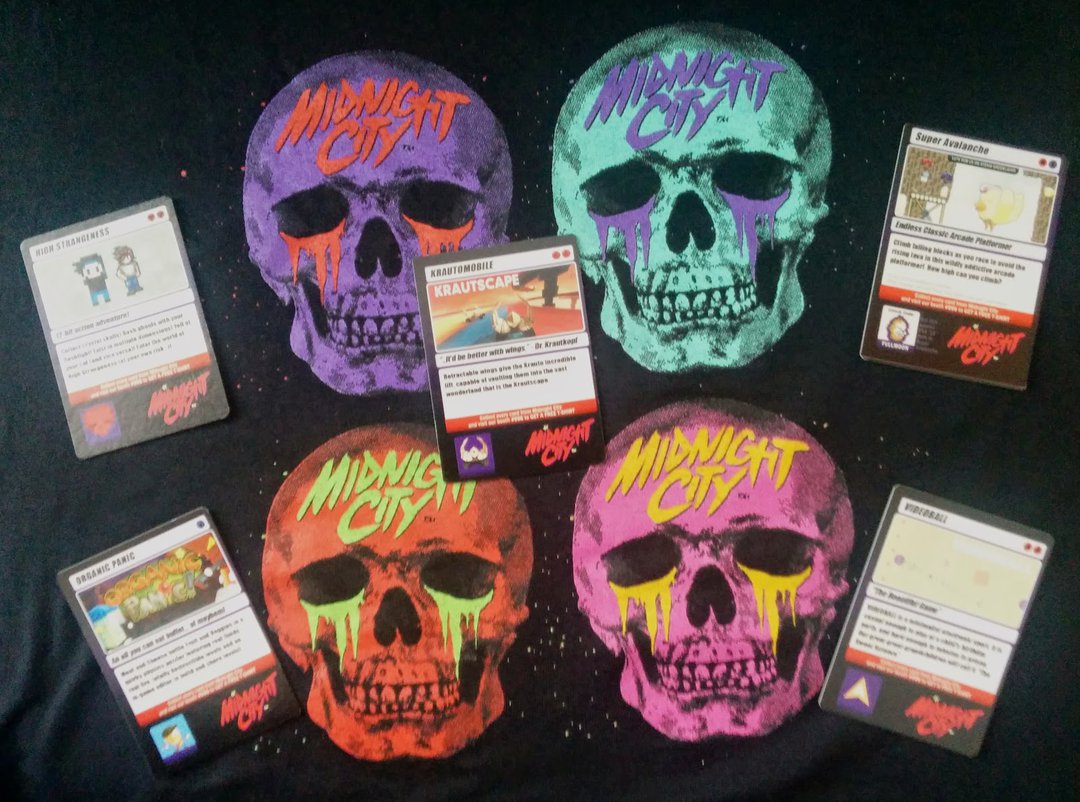 Seriously, props to the graphic designers. This shirt is rad.

Unlike some other booths that were handing out swag for the sake of getting their name out there, Midnight City rewarded people for actually playing their games. They went through the effort of making five special trading cards, one for each game. If you played a game, you got a card. Collect all five, and you get a sweet t-shirt. This meant people actually stuck around and waited their turn to play these games instead of watching. Often this led to lengthier conversations with developers while playing, making this one of the more informative booths at PAX. Even if a game looked simple at first glance, I learned some really interesting things by talking to each developer - even the PR guys knew what they were talking about! Without further ado, it's time to share some of that information below: 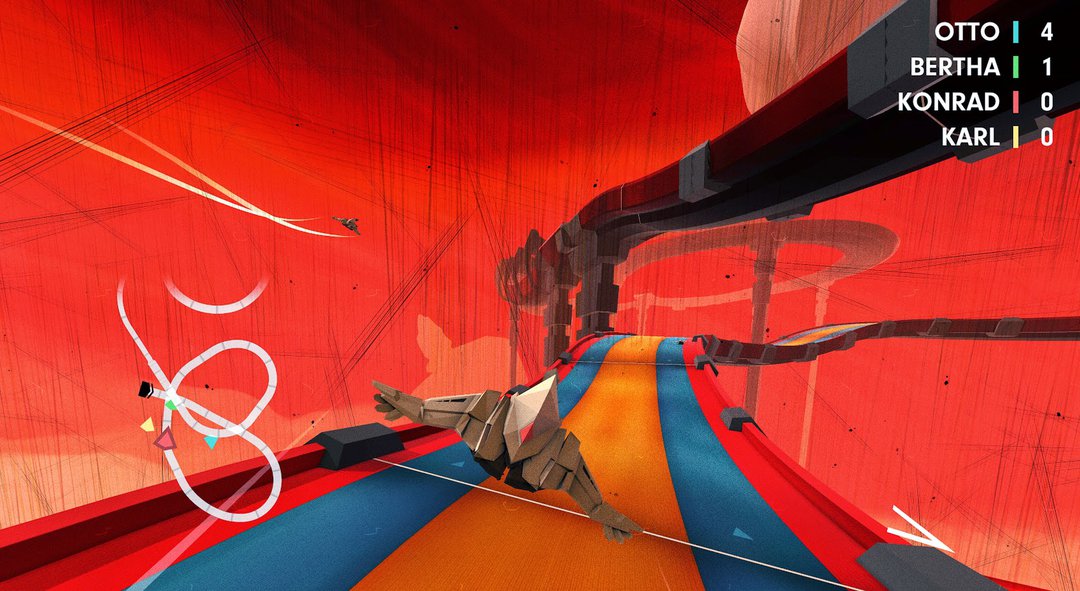 Located smack in the middle of the booth, Krautscape was the first game to catch my eye with its low polygon count and vibrant color palette. Unlike most racing games, the track is drawn in real time by the player in the lead. Oh, and you can sprout wings at any time and fly. This is a racing game where the point is to find the straightest path to the next checkpoint, even if that means intentionally driving the wrong way then flying over a large chasm to make it there. One of the most interesting modes was Ping Pong, which reversed the track after small intervals of time. By the fifth round of a match, this creates a map that is more fun to navigate by jumping tracks and flying than it is to follow the given path. Nothing is more satisfying than getting the lead by completely jumping over a complicated turn while your opponent is still driving on the track, and this happens constantly.

Krautscape is currently available on Steam early access for $7.99. While online play is fun, it's even more exciting with friends. This is one of the few early access games I recommend picking up immediately. 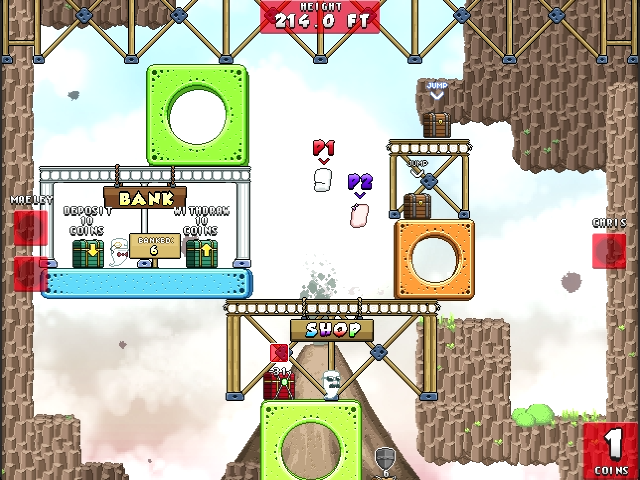 Super Avalanche may look familiar. As the name implies, it is the sequel to an old flash game simply titled Avalanche, which featured a marshmallow trying to escape rising lava by jumping onto a series of falling blocks. Super Avalanche takes this simple idea and runs a marathon with it. Firstly, the game looks vastly improved: The controls are much tighter, and the pixel animations are extremely smooth. What was originally a simple flash game now has enemies, bosses, and a vast amount of items to buy and collect. I really got a Binding of Isaac vibe from this game, of all things. The levels are randomized, the items are randomized, and it's all about getting as far as you can and as powerful as you can without dying. This is a game you can get better at over time, but not without being able to adapt to your environment on the fly. The key will be learning how to use every item well, and even knowing when to avoid certain items - with a boasted 70,000+ possible item combinations, it sounds like something that will stay fresh for a long time.

If you want to try the game out, there's a flash demo playable in-browser available now! The game is currently on Steam Greenlight, and it could definitely use the support - especially if you enjoy the demo. 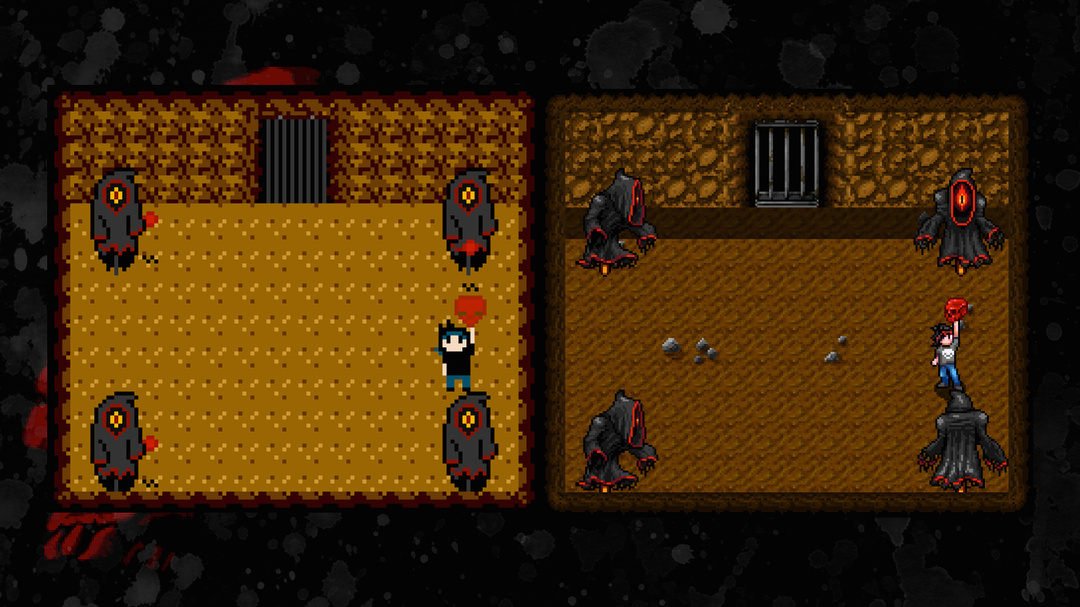 The same room in both 8-bit and 16-bit versions.You can switch between them any time by using the red skull item.

Many games these days use things like pixel art to try to capture a retro aesthetic. However, not many of those games truly feel like a trip to the past. High Strangeness changes that. With both 16 and 8 bit graphics (12-bit, as they call it), a 4:3 screen ratio, and an awesome chiptune soundtrack by Disasterpeace of Fez fame, this game truly makes me feel like I'm playing on an old SNES. To top it off, the booth was using a SNES controller for the demo, and it couldn't feel like a more perfect fit. High Strangeness is a throwback to the action-adventure RPGs of yesteryear, and it looks like it's doing so splendidly.

High Strangeness has been a work in progress for a surprisingly long time. It was the first game project to be backed by Kickstarter way back in 2009, has just recently been Greenlit on Steam, and is finally making its way to PC and consoles later this year. The presentation alone is proof of the hard work that has gone into it: from the music to the sound effects to the menu design, every detail feels intentional. Most importantly, every area in the game has been made in both 8-bit and 16-bit thanks to a strange red skull the player can use at any time. In the demo, this effected both combat and puzzle-solving. Enemies could shoot and attack in eight directions when in 16-bit, but when switched to 8-bit were tied to only four directions. In the demo, certain paths and switches were only accessible in 8-bit, while the player was only fast enough to cross a timed bridge puzzle in 16-bit. Admittedly, these were pretty simple puzzles, but once the full game comes out, I'm excited to see these mechanics pushed to their full potential. 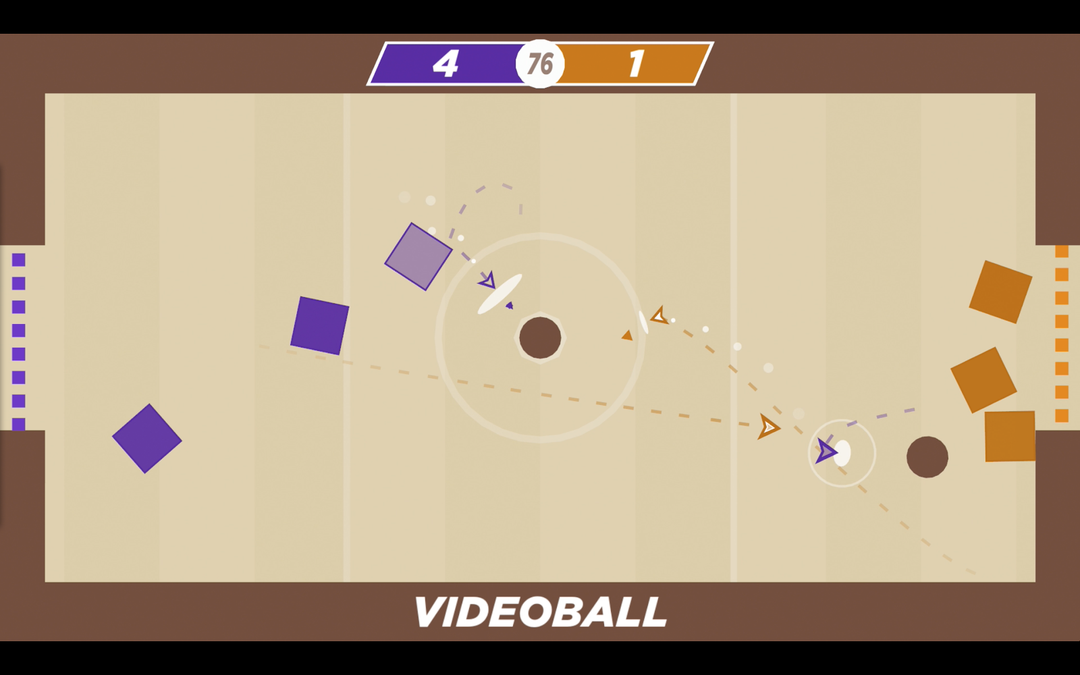 Movement in this game feels smooth. Think Geometry Wars, but you can only shoot in one direction.

Videoball is advertised as a "minimalist electronic sport", and that's the best way to describe it. The demo I played pitted four triangles against each other in teams of two, with the goal being to knock giant circles towards the opponent's side of the screen. The main weapon players can use to their advantage is a four-stage charge attack, and each stage has its own benefits. Each level of charge takes a longer amount of time to charge than the last, so strategizing what attacks to use requires knowing when exactly to let go of the charge button. The first level of charge won't move balls around very far, but is great for quickly stunning enemies and destroying barriers. Charge level two is great for a forceful nudge, while charge level three will send objects flying across the board. However, level three is only available for a fraction of a second before turning into a defensive attack at charge level four, which places a large square on the field. Each of these charge levels is just varied enough to all have their own uses, which forces players to learn to use them all rather than running around with a max level charge.

The build I played was apparently glitching quite a bit. Instead of having a maximum of two balls on the field at any given time, there were at least six by the end of the match. I kind of hope they leave this feature in as a custom option in the final build, because that match was chaotic in all the right ways. I was constantly switching from offense to defense as control for the board shifted moment to moment. I don't even remember who won; It was just fun to try to keep up with the action.

Videoball is slated to come out "soon" on "almost everything" with online multiplayer and a multitude of maps. Along with Towerfall and Samurai Gunn, I'm excited to have a new multiplayer game to pull out at parties. 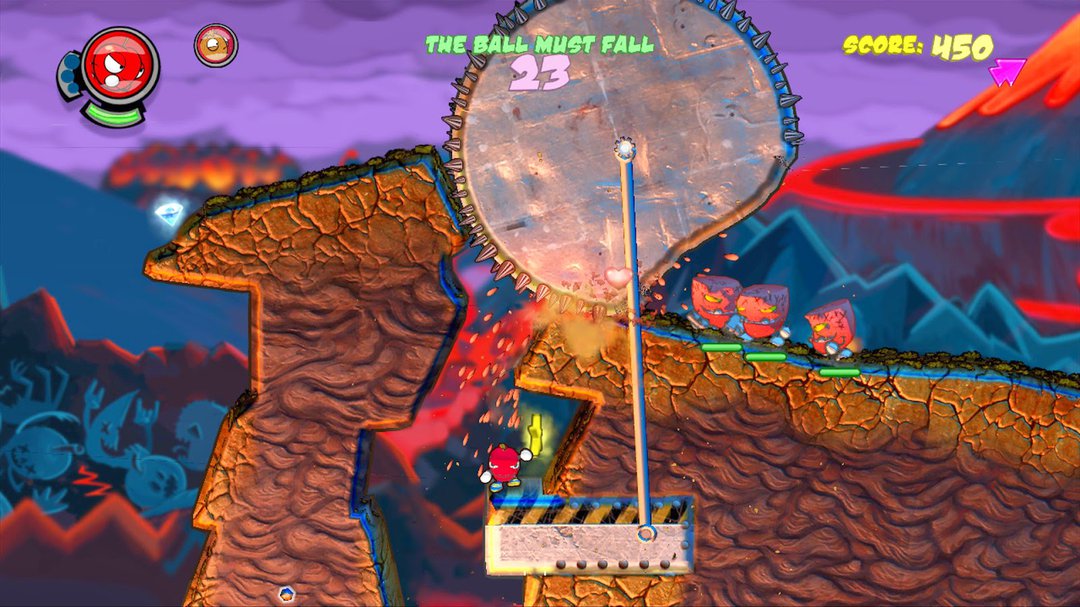 That large spiky object is seconds from being released upon those poor slabs of meat.

Probably the most technically impressive game of the bunch, Organic Panic is about destroying everything in your way to get to the goal. It kind of feels like Worms if Worms were a fast-paced action platformer with a heavy dose of physics on top. Levels are completely destructable, from the trees to the ground beneath your feet. You can burrow underneath enemies, light them on fire, drown them, or even send giant objects rolling towards them Indiana Jones-style. I admittedly didn't get a whole lot of time with this one, but it looked like it had a lot to offer. There were multiple playable characters, each with their own unique abilities, and some of the later levels required actively switching between them to use different powers in different scenarios. On top of that, there's a level editor that allows you to upload levels for the entire community to see. Thankfully, the game was just recently Greenlit on Steam, so we should be seeing this one soon.

So that's the Midnight City booth in a nutshell! They seem to be curating a collection of awesome games, and I'm excited to see the kind of games they announce in the future!