On Track For Greatness 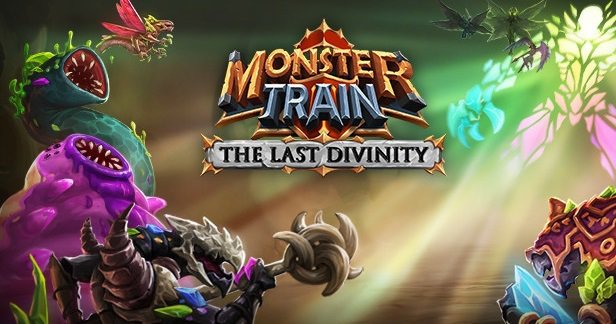 Let me just start by saying that Monster Train is my addiction. I’ve logged hundreds of hours building decks to defend a Hell train from the armies of Heaven. I completed the entire logbook - and I did it just in time for The Last Divinity to give me a whole new page to fill in.

Are people still doing this meme?

The Last Divinity brings new cards, new events, and a few balancing tweaks to this deckbuilder / turn-based tactics game. However, the three major additions are:

Note: If you aren’t familiar with Monster Train, you can find most of the terms that we don’t link directly here, listed under either Effects or Buffs

Monster Train has always been about finding the right risk/reward balance. Each battle (aside from bosses) has an optional challenge like giving enemies increased strength or armor, or nasty effects like Multistrike. If you take the challenge, you’ll get a reward like extra gold or a new recruit for your deck. So, you generally want to take on as many challenges as possible - as long as you’re sure you can beat them.

The Last Divinity throws more coal on that fire with Pact Shards, the DLC’s signature mechanic. Throughout the run, you’ll get the chance to take Pact Shards in exchange for all kinds of goodies - special powerups, gold and artifacts, and my personal favorite: infusions (giving a monster the abilities of another monster). These extra options let you make some truly broken decks, and collecting 100 Shards lets you access the true final battle. 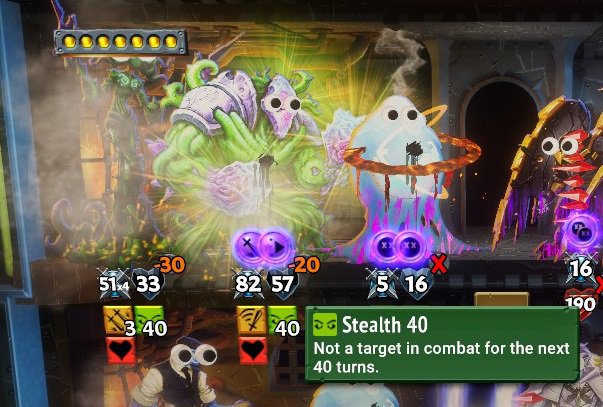 But, of course, that power comes at a price. Every Pact Shard you have makes your enemies more dangerous, and taking too many too quickly could leave you facing an unwinnable fight. Basically, before you take any Shards, you want to make sure that you’ll get a bigger boost than the angels do.

Monster Train does include a helpful Pact Shard tracker, which tells you not only how many you have, but also how dangerous your next fight is likely to be because of them. The tracker ranges from white (no danger) to red (extreme danger).

Overall, the Pact Shards are a great addition, and really push the risk/reward feeling of Monster Train to the next level.

In a game of demons, plant monsters, and Victorian people made from living candles, the Wurmkin are weird.

First of all, they introduce entirely new mechanics to the game: Charged Echoes and Infused (not to be confused with the Infusion you can do with Pact Shards). Each floor of your train starts with four empty slots for Echoes, which you can fill by playing Infused cards. The Echoes fuel some of the Wurmkin’s abilities, and certain cards spend those Echoes to produce powerful effects.

There’s a bit of a learning curve while you get used to managing an entirely new resource, but so far so good. 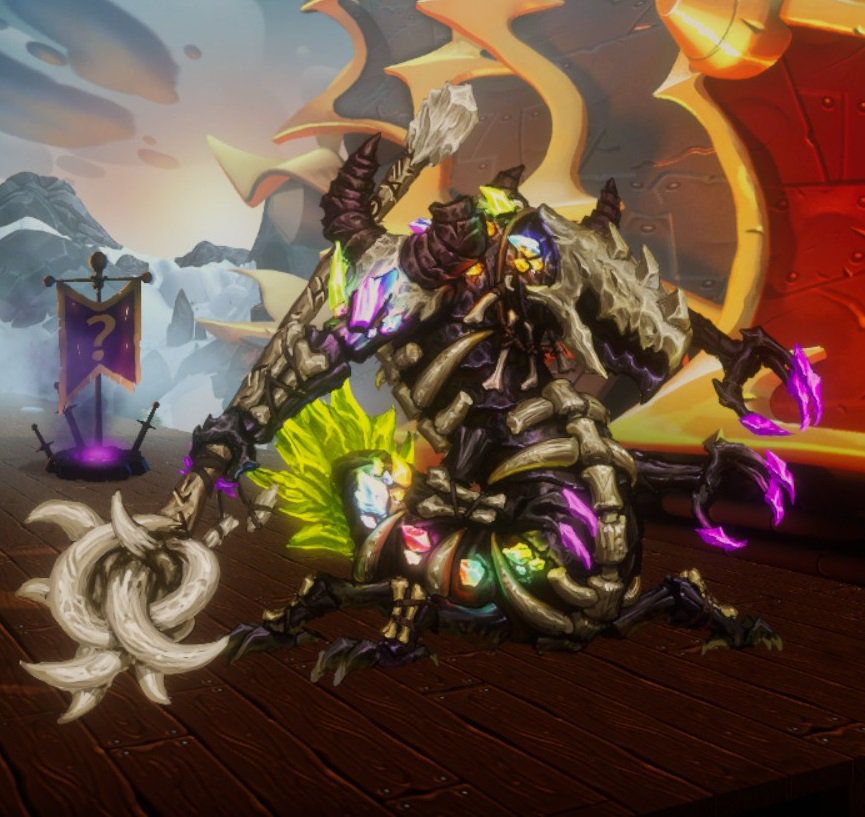 The Wurmkin are a delightful combination of beautiful gems and gross bugs.

Where it gets hairy is getting new Infused cards. Normally, you’re offered three cards and allowed to pick one (or pass to get a little bit of gold). When you’re playing as the Wurmkin, one of those three cards will be Infused - only one, selected randomly.

So, if you’re running a deck that relies heavily on Charged Echoes, you might find yourself taking cards you’d normally pass on just for the Infused; or, going the other direction, diluting your Infused card pool because something was too good to pass up.

Of course, those kinds of decisions are central to the deckbuilder genre, but the random Infused cards feel like they make it even less likely than usual that you’ll be able to build an optimal deck.

This is not to say that I don’t like the Wurmkin; you can build some very fun strategies around getting tons of Charged Echoes, spamming Reap, or just powering through with brute force (with help from Melee Weakness and Trample, if you’re lucky). My only complaint is that I feel like they stifle my choices a bit.

The other big thing that The Last Divinity brings to the table is… well, The Last Divinity. TLD is a massive boss that takes up all three floors of your train, and attacks every floor every turn. That’s on top of a whopping 10 waves filled with buffed monsters, and even a couple of early-game bosses. This battle is brutal.

To be clear, I have no problem with this being a difficult fight - the hidden postgame battle should be difficult! However, if you’re planning on going to TLD, there are really only a handful of strategies that will work (mostly variations on “huge monster with Multistrike”). 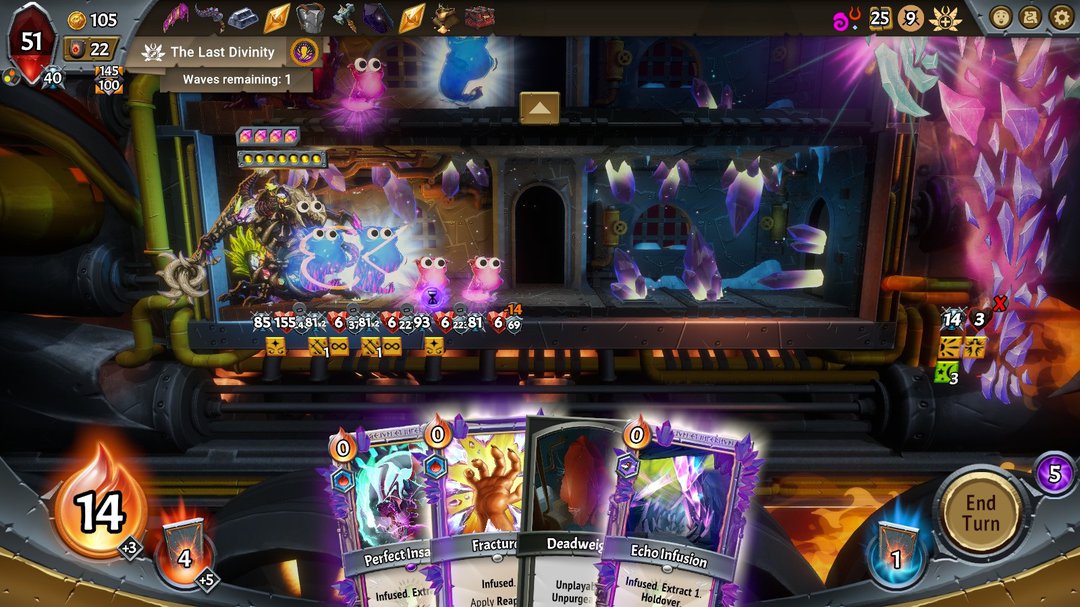 That moment when you punch God in the ankle so hard that he dies.

Glass cannon backliners will die to Spikes; spells will get blocked by Spell Shield (unless you’ve got Piercing); damage-over-time effects work well enough on the waves, but TLD itself clears damaging effects every turn, so that’s a no-go. Finally, you need to be able to dish out huge amounts of damage to entire waves every turn, because if even one wave gets through then it’s probably Game Over.

Basically, the new Pact Shard options offer lots of fun ways to break the game; but, if you’re aiming for the postgame, then you’d better break it in the direction of overwhelming attack power.

I have a couple of nitpicks with The Last Divinity - namely, the random Infused cards and the Last Divinity battle itself - but, on the whole, this is a fantastic DLC that adds a freight car’s worth of replayability to an already-addictive game.

I’ll just let this speak for itself.

$11.99 is a steal for the countless hours you’ll spend building decks, defending your train, and killing God - I feel like I should have to take Pact Shards IRL to keep playing.