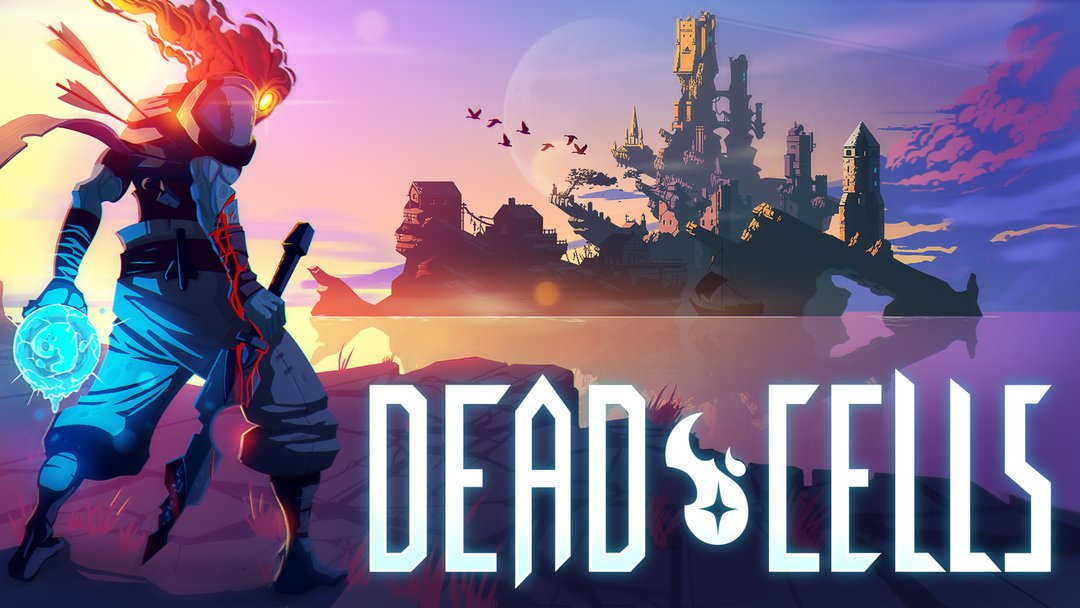 It hits you like a bolt from one of its lightning spells. PAX East is well behind us at this point, but I have had my eyes on a couple of key titles since then, biding my time until their release. I only played Dead Cells for maybe ten or fifteen minutes during the con, but the impression it left with me has remained strong over the last couple of months. It's finally releasing in early access on Steam (at a special price on release day as well), and I’m telling you to get it right now. Right now! I’ll chill until you come back.

What’s that, you say? Looks like just another pixelated side-scroller beat ‘em up? Right, looks like a rundown of some things is in order.

This article originally was released on May 8th, 2017. It has been updated to reflect its release to multiple consoles. 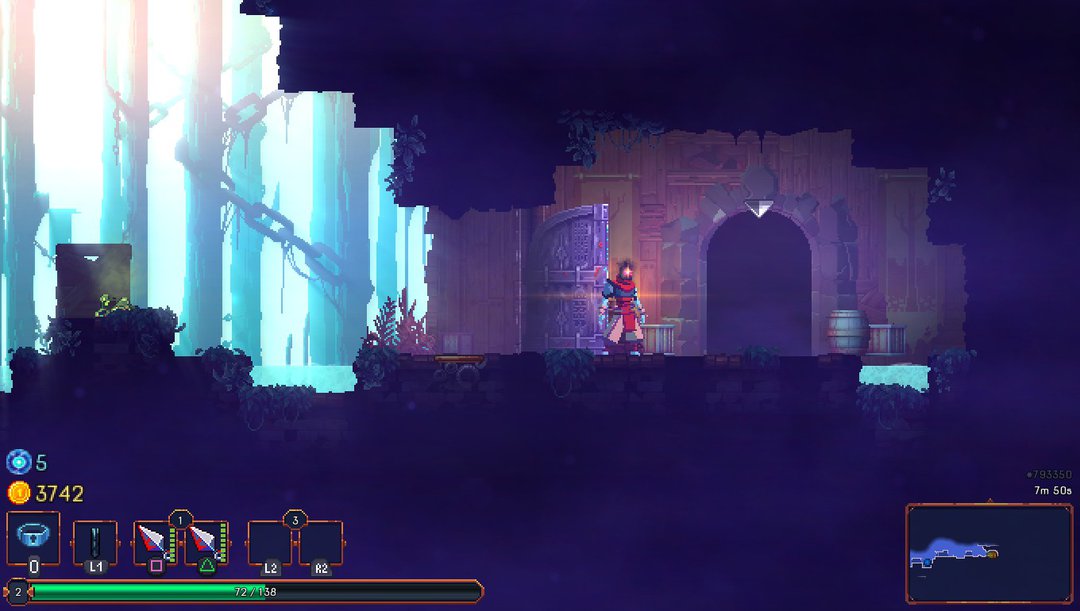 This game really pushes the boundaries of what pixels are capable of in terms of graphical detail and lighting effects.

Dead Cells is a self-styled roguevania game. That is, it combines the side-scrolling, room-to-room action of clobbering monsters (commonly known as Metroidvania) with the difficulty of having one life and a respawn system (found in roguelikes). Players get one bar of health to push as far as they can, defeating levels, bosses, and exploring new areas, before eventually dying and starting over. Unlocked powerups stay unlocked, defeated bosses stay dead, and the game gives you a currency system that allows you to purchase upgrades to make your future runs more fruitful. All pretty standard design for a game of this nature, but it’s worth mentioning that even in the beta state in which I’m currently experiencing the game, it never feels unfair.

The level design is clever in that, on your first run through a given area, you’ll be more or less shepherded on a straight path, forced to ignore all manner of locked doors (though the occasional detour can result in some nifty powerups). In my first half hour of play, I passed several interactables that I could literally only tickle before I encountered my first boss. Recovering a rune from said boss allowed me to use these interaction points to reach new areas. In this way, levels quickly go from “tutorial” to multifaceted, and the joy of slaying monsters quickly dovetails into the joy of poking your face into new areas, getting it sliced off, and going to explore in a new direction. It’s also worth noting that while areas will always contain similar features, they randomly shuffle with each respawn, keeping secret locations, powerups, and enemy layouts fresh. 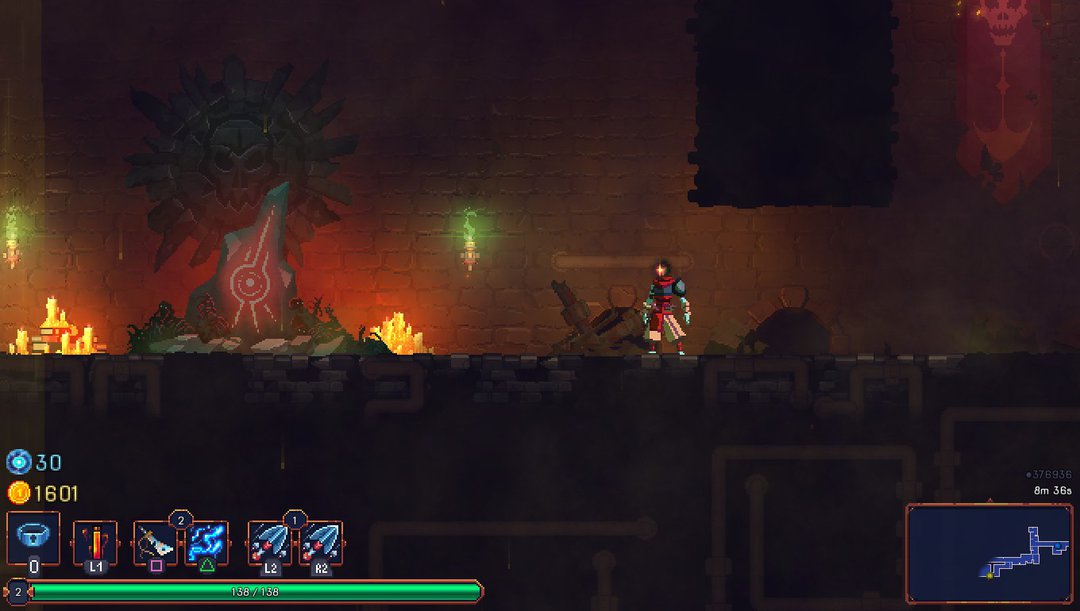 When I saw that tapestry on the far right dropping into this room, I knew what was in store. Hint: the skull on the wall isn't because there will be cookies.

Of course, no review of a roguelike would be complete without a look at its chewy center of combat mechanics and item interactions. You get two weapon slots and two item slots with which to get as creative as you wish. All equipables have unlimited uses, with the exception of certain ranged weapons and item cooldowns. While your first combinations will be largely based on the random gear you find while exploring, half of the fun comes in combining what you find. I had throwing kunai as a backup to my sword in one run when I found a second set. I decided to go all out and use kunai on both my weapon slots, forgoing any kind of melee and barraging my enemies with throwing knives. I was an unstoppable force until I hit the next boss, losing track of my weapon refresh and running out of ammo. Death soon followed. I still experiment with odd combinations, though.

Combat is a rabbit hole unto itself. What starts out as a basic attack/dodge system in the first thirty minutes, much like the dungeons you explore, gets deeper and deeper as you play. Your sword swings do indeed have arcs and timings based on what you weild. Certain weapons and items can attack from the safety of a hanging position or ledge. The designers have incorporated animation cancelling, allowing you to roll dodge out of longer animations if you’re in danger of getting hit. Even that basic, rolling dodge gets more utility as you realize you can use it for mobility, as a gap closer, and a tool to bypass certain defenses in addition to simply not getting hit. And all the motion in this game is silky smooth. It’s not often I find myself praising the actual feel of the controls as my finger movements translate to action on the screen, but that’s certainly the case here. 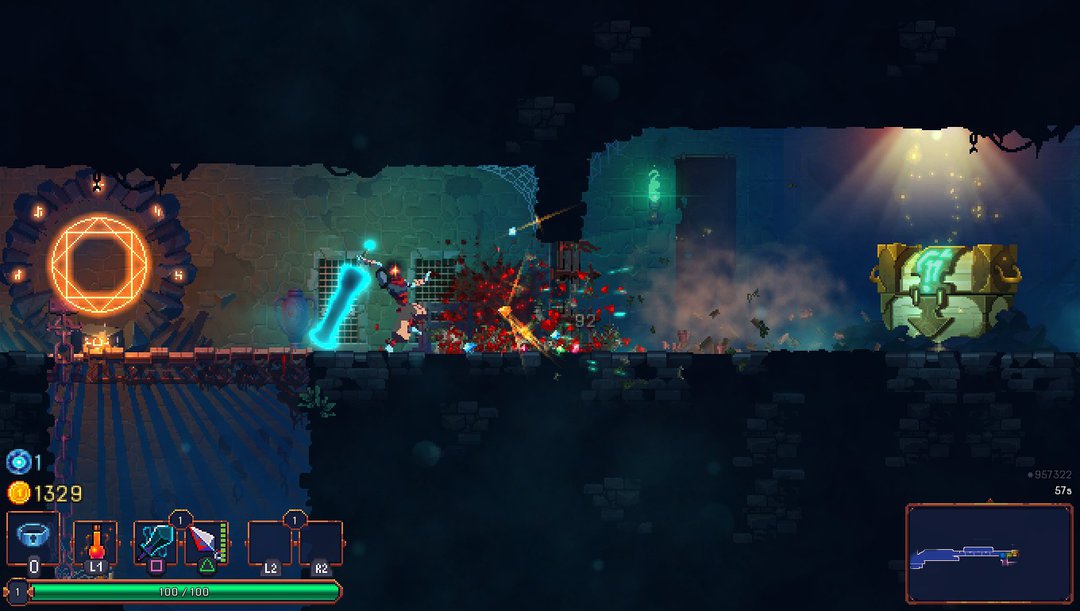 Every weapon has its own combos, timing, and special traits.

A Level Up In Design

If the devil’s in the details, then this article would easily be twice the length if I tried to discuss every little nuance I’ve found that adds to this game. Those weapon and item powerups I mentioned? They have levels themselves, giving you bonuses at higher levels beyond simple damage increases. Door can be opened with the “use” button, but if you’ve seen Wyatt’s Mr. Shifty review, they can also be “knocked,” stunning enemies on the other side as you break through in a fury. Perhaps my favorite little addition to levels themselves is the inclusion of teleport gates; they allow you to detour to explore side paths, knowing that if you hit a dead end or door you can’t yet unlock (or just a powerup at the bottom), you can quick warp yourself back to the main path without wasting time having to backtrack. Motion Twin has clearly gone out of its way to remember what’s fun in this game, the combat and exploration, and keeps you from ever getting too far away from it.

The last bit we need to discuss is the story. Anyone familiar with a Dark Souls title will be immediately at home with Dead Cells. You get little snippets of story through some minor dialogue at the start of the game, but everything is largely told through the environments. What are the creatures you’re actually fighting (take some time to actually look at them)? What is this place you’re in, and why are you here (a full shot of it is visible on the title screen)? If you pay attention to your environment, it will tell you things like when you’re about to blunder into a boss. And what, exactly, are you? I haven’t uncovered much of the story yet, but I’m eager to learn more as I outwit my way through the later levels with my wicked item combinations and some raw fighting skill. 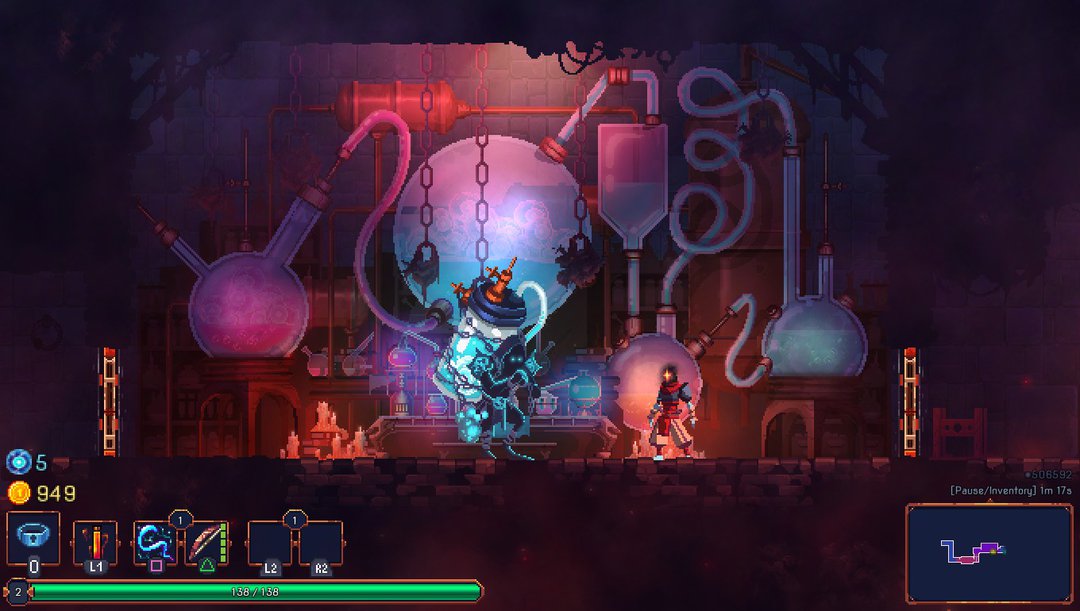 Not sure who this dude is yet or what he's doing with the cells I collect, but he's always surprised to see me still alive.

The more I play Dead Cells, the more I realize it has a lot in common with Souls games. I think I “cheaped” my way through a midrange boss with a particularly nasty combination of items and found myself with access to an area I was grossly underprepared to tackle (the area transition doorways seem to be color coded to match their difficulty, and I now stay clear of anything red or purple). Minor enemies in this area seemed like mini bosses in themselves. Dead Cells exploration is like a Souls game in this regard. You might poke your head into an area you’re underequipped to handle, die, and be forced to start over. But every time you start again, you are more powerful in your knowledge of areas to avoid, hazards to watch out for, and enemy patterns to adapt to. The fact that it doesn’t get old after several attempts is a testament to its solid design.

In a recent statement to the community, and as already polished as this game seems, Motion Twin has stated that the release will only contain about 40-50% of the content they have planned to cram into this title. Over about eight months to a year, they will polish the game and release new content until it's completely finished. They're also looking forward at that time to a release on console as well!

I cannot recommend Dead Cells highly enough to anyone who enjoys side scrollers, roguelikes, or gorgeous pixel art and lighting effects. I’m currently speed running myself back through some starter areas to a boss about three levels down that I think I can take (he still kills me in about three hits). Keep your ambition high, one finger over your dodge button, and remember, dear readers:

Death is only the beginning. 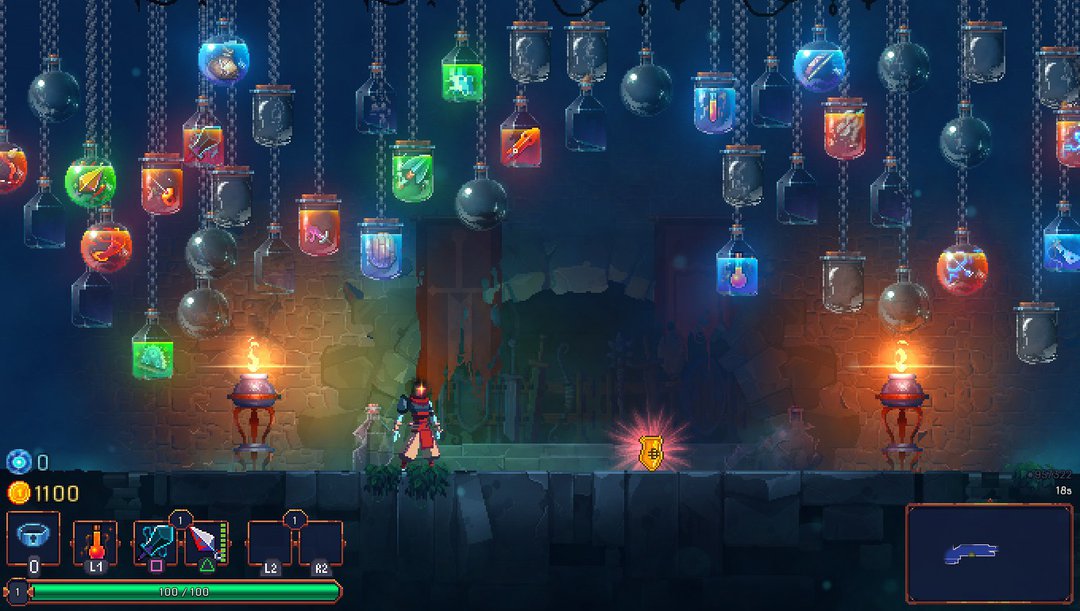 Feel there's something here I've missed? Have any questions about other aspects of this game? I'm happy to reply, so feel free to leave us a comment here or message us on Facebook to share your own thoughts.